The developer invited feedback on revisions to its planned 133-unit, mixed-use apartment complex proposed for Haddon and West Knight Avenues. 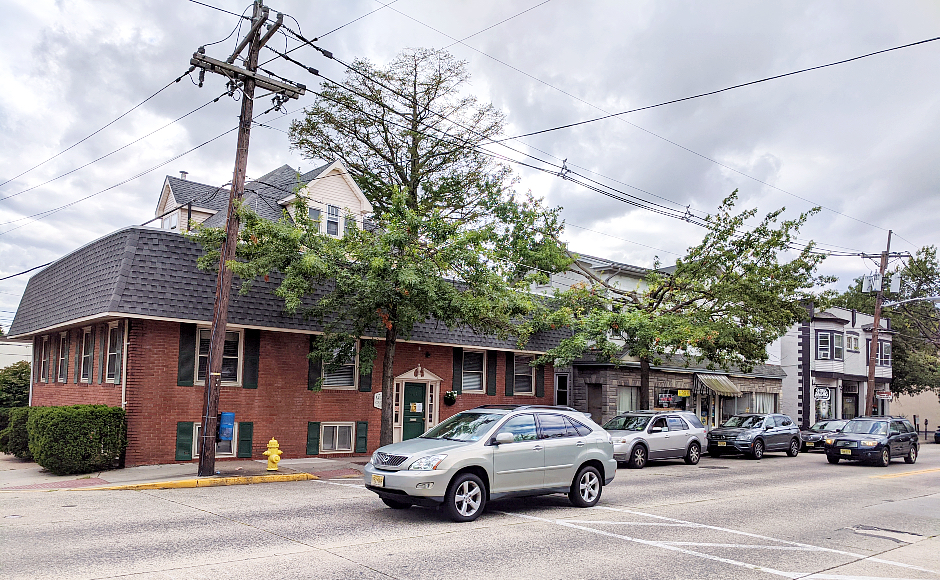 In mid-August, Collingswood-based property management and development corporation Ingerman floated a proposal to redevelop more than half of a municipal block in the borough downtown at a community meeting.

Since having introduced the project to the public in that discussion phase, conversations between the developer and the local government have driven a number of design changes to the project, which Ingerman Senior Asset Manager Aaron Waltzer ran down at a Collingswood community forum Wednesday.

After initially pitching a 184-unit, five-story apartment complex for the area bordered by West Knight and Haddon Avenues, Ingerman shaved 51 units and two stories off the project, bringing the total number of units to 133: a mix of one-bedroom (84), two-bedroom (25), studio (20), and three-bedroom apartments (four).

Fifteen percent of the total count (20 units) will be set aside to meet affordable housing requirements for new construction, while 85 percent will be rented at market rates comparable to those at the Collings at the Lumberyard apartments (around $2,300 to $2,500 per month). 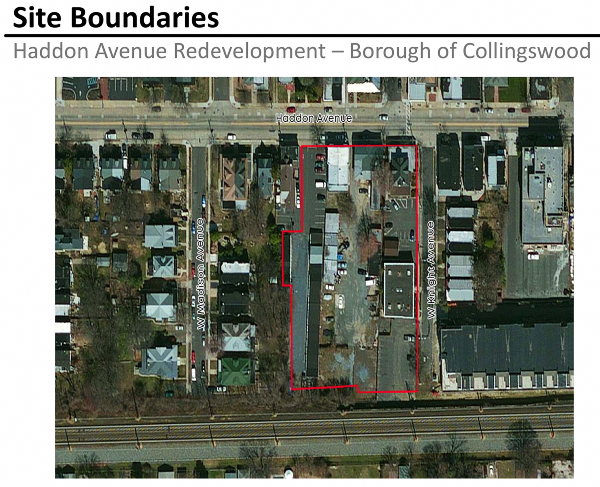 Dropping the building elevation from five stories to three, and setting back the third floor of the structure along West Knight Avenue, will help the project better match the surrounding context of the two-story homes in the neighborhood, Waltzer said.

To make those changes, Ingerman will abandon plans for a two-story, base-level parking garage and instead construct 140 underground parking spaces, including those for persons with disabilities and electric vehicles. First-floor bike storage will also be considered in the design. 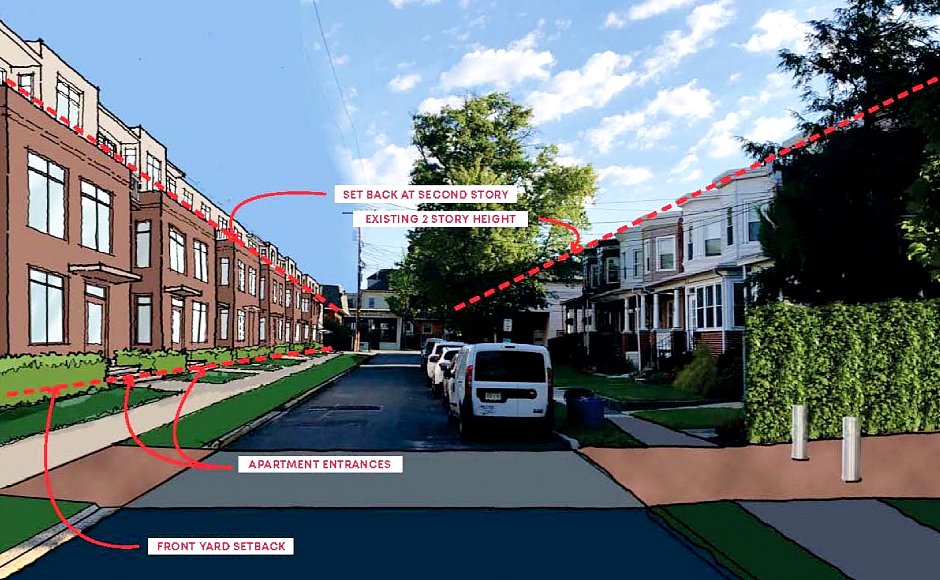 The first floor of the complex will feature tenant amenities including a lounge, lobby, and fitness center.

A pair of interior courtyards will incorporate greenspace with outdoor features like fire pits, lounge chairs, and a community grill.

Commercial space in the complex also has been downsized in the revised plans for the complex, from 3,500 square-feet to 3,000 square-feet of commercial, office, or retail space, which will be situated at the corner of Haddon and West Knight Avenues.

Ingerman will retain a private hauler to manage waste from the complex, while the borough will handle recycling and yard waste.

Project architect Nando Micale of the Memphis, Tennessee-based design firm LRK said those parts of the complex that front Haddon Avenue will be “responding to that rhythm of the storefronts” there.

Although they will house the complex lobby and leasing offices, and not customer-facing businesses, designers are “working to create that storefront image, not a big blank wall,” Micale, a Collingswood resident, said.

“Haddon Avenue frontage would be transparent like all other retail shops [on the block],” he said, with the building elevations along West Knight Avenue “striking that line of two stories, showing a response to the twins across the street, [and the] third floor set back so you don’t have a tall building looming.”

The Haddon Avenue sidewalk would be extended in front of the complex past its prior depth, to match the sidewalk depth at the Lumberyard. Ingerman also plans to construct a curb bump-out to insulate pedestrians from the entrance to the garage, which would divert drivers along Haddon Avenue rather than West Knight.

To help pedestrians access the PATCO Speedline, the developer also proposes adding a pedestrian walkway at the end of West Knight, connecting to Atlantic Avenue by the Lumberyard, possibly marked with fencing and bollards.

If approved by the borough land use board, Waltzer said the project could be constructed on a 16-month timeline, potentially beginning in the fall of 2022 for a spring 2023 completion. Collingswood Mayor Jim Maley said the project is “three years away from a ribbon-cutting.” 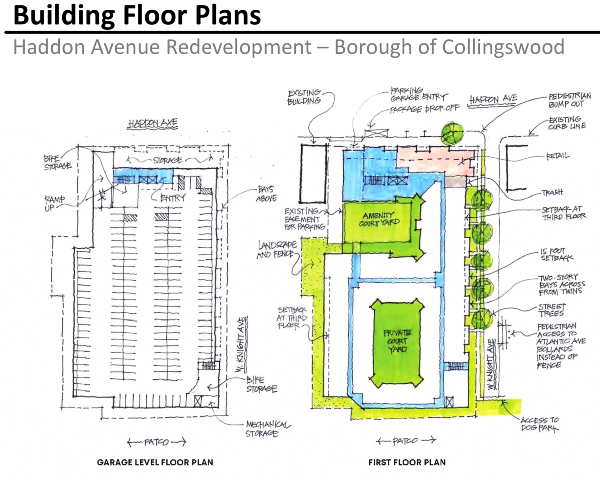 Maley also said the borough could sign a Payment In Lieu Of Tax (PILOT) agreement with the developer, reducing its total tax bill for a period of time while allocating those locally retained revenues towards a “community recreation arts facilities fund.”

“This, in essence, creates new money, and we would take that and put it toward projects that we haven’t been able to afford; most notably the [Collingswood Junior-Senior High School]  stadium project that went down,” the mayor said.

“With any luck, we get a cannabis operation on 130 that will generate a lot of money, and [under] the same plan, [we] dedicate a significant portion of that to buildings,” he said, while noting that “none of that has been discussed in any detail.”

Maley said Thursday that the borough will convene a facilities development committee to explore the possibilities of creating a community complex that will support athletics and performing arts; potentially something comparable to the Norcross-McLaughlin Memorial Dell in Haddon Heights.

“But that’s all concepts way down the line,” he said. 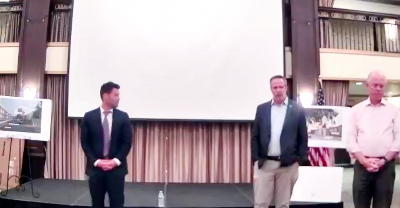 Although the redevelopment project will create additional housing in the borough and infuse new revenues into its ratable base, it will displace commercial renters of several properties whose owners have agreed to sell to Ingerman.

Bill Haas and Miranda Powell, who own Secret Origins Comics and More at 554 Haddon Avenue, have already secured a new storefront in town and are planning a late November opening.

Haas said he’d been in conversations with his landlord for more than a year-and-a-half about the proposed project and what it might mean for his business.

But others, like music engineer Jay Mage, whose MageWorks business occupies a pair of 800-square-foot garages in the middle of the Haddon Avenue block, didn’t get the same courtesy. The sale (and demolition) of the property in which MageWorks is housed will permanently displace him from his 10-year-plus base of operations.

Mage, who’s spent that time supporting the local arts scene through live sound engineering and via his recording and rehearsal studios, fears that he and his neighbors won’t be able to find comparable, alternative locations for their services within the area.

“I hope it works out for the best,” he said. “I like being a part of the town. I volunteer with almost every organization in town; I’d like to figure out how to continue doing that. It’s going to be a lot more difficult if I’m 30 minutes away, which is where the nearest properties that are affordable are.”

Mage also fretted that the absence of affordable space for community arts programs and small-scale entrepreneurs could have a noticeable impact on local culture. 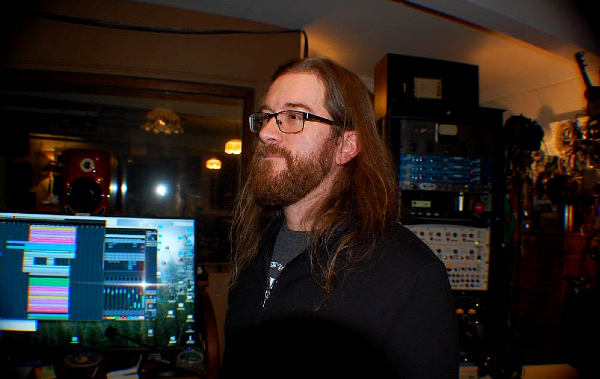 Jay Mage in his recording booth at MageWorks in Collingswood. Credit: Jay Mage.

“If there’s no room for studios, for people to work on their craft outside of their homes, then we have to pledge to bring the music and the arts to the community,” he said.

“These towns have staple artists, and that’s what really gives them their charm,” Mage said.

“It’s not just me, and not just with this building,” he said.

Maley said he sympathizes with the circumstances of commercial renters like Mage, and that borough officials have offered to help them relocate within town.

“We have already offered and tried to help; we will continue to do that,” the mayor said. “The other storefronts on Haddon Avenue are all agreeing to sell. When you rent, that’s just a business thing that can happen.

“It is unfortunate,” Maley said. “I’m not happy. I wish it didn’t impact anybody.”

However, the mayor believes the public exchanges about the project have already improved its design prior to any official application to the borough joint land use board. Since the proposal will be subject a redevelopment agreement between the local government and Ingerman, details of the project will be negotiated on an ongoing basis until such time as a plan is presented formally.

“It’s always helpful to have public feedback,” Maley said. “It’s been a developer-town back-and-forth; we’ve made it a public process.”

Although any new construction in the borough must include affordable housing units, Maley said that he believes Collingswood has an “extraordinary mix of housing types” in the borough that support “making sure everybody can find a place.”

He also pointed out that property values in South Jersey continue to appreciate amid a red-hot real estate market. According to data from Main Street Realty, Collingswood home sale purchase prices were up 20 percent year-over-year in the first three quarters of 2021. 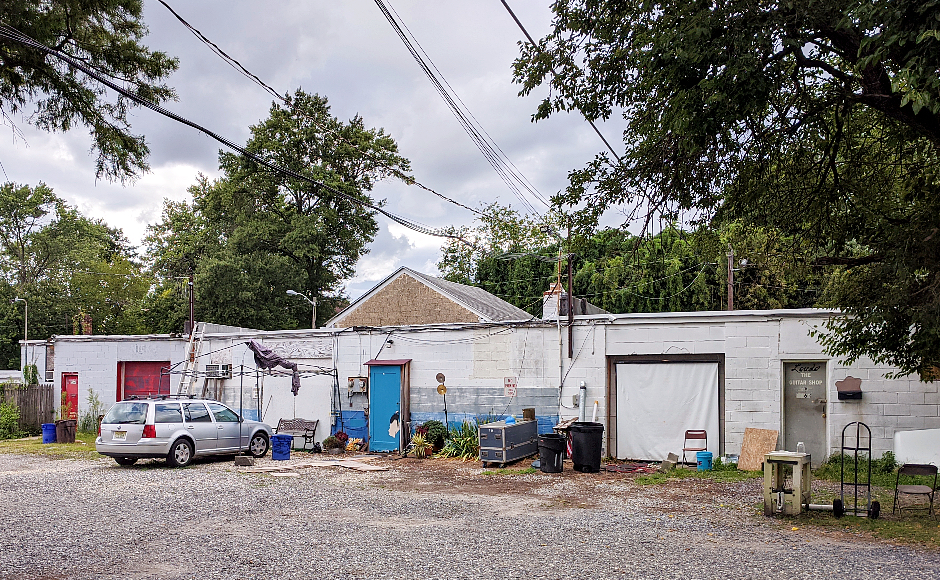 Garages that would be cleared out for the Ingerman redevelopment project house viable businesses like MageWorks. Credit: Matt Skoufalos.

Maley also believes that “it’s the right time” to pursue a major redevelopment project in the borough because it will add additional housing inventory to a growing community, and because the current economic climate presents conditions favorable for such work.

“Part of the good side of [property] values being where they are is that a lot more developer types think that they can recoup their investments,” he said.

The recent completion of the new public safety building in the borough, and the planned demolition of the former police station, will also enable Collingswood to contemplate additional redevelopment along Atlantic Avenue.

Maley said the borough has already entertained a few expressions of interest, but nothing beyond back-of-the-napkin sketches has yet come of it.

“One of them has told me that they’ve had architects and engineers out a few times, and I’m waiting to hear from somebody that’s got something of a concept to propose,” he said; “something that’s structured parking with residential or offices tied to it.”