Trending
You are at:Home»Schools»Collingswood»Junkbots, Pandora’s Box, and Months of Planning: an Odyssey of the Mind Comes to Haddonfield

Haddonfield Memorial High School hosts the New Jersey state finals of the Odyssey of the Mind tournament Saturday. Eight teams from Collingswood, Haddonfield, and Haddon Heights will compete for a chance to advance to the world finals in Michigan. 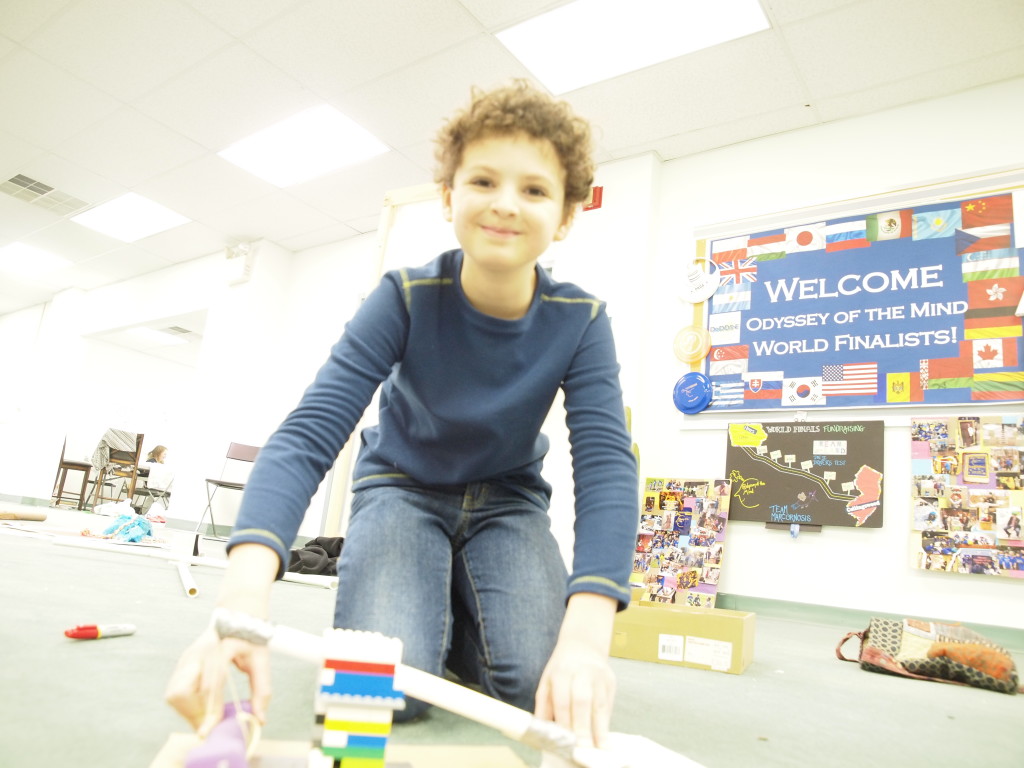 Somewhere between a science fair and a school play, between model U.N. and chess club, or maybe scouting and band practice, is Odyssey of the Mind.

An after-school problem-solver’s club, it invites children to become deft of hand and quick of wit, and sharpens their creativity and focus–the very elements educators say lie at the root of the S.T.E.M. to S.T.E.A.M. movement.

Yet although the challenges dreamed up by the Sewell-based Creative Competitions, Inc., are certainly interdisciplinary, they are far from typical of the two-trains-leave-Chicago word problems with which most parents associate such tasks.

Kids who participate get months to consider the parameters of the challenge and fashion their solutions–within a capped budget and without parental involvement.

Best-in-class solutions progress to a world tournament May 20 to 23 at Michigan State University. The New Jersey state finals will be held in Haddonfield this Saturday, and eight teams from Collingswood, Haddonfield, and Haddon Heights all have a chance to advance. 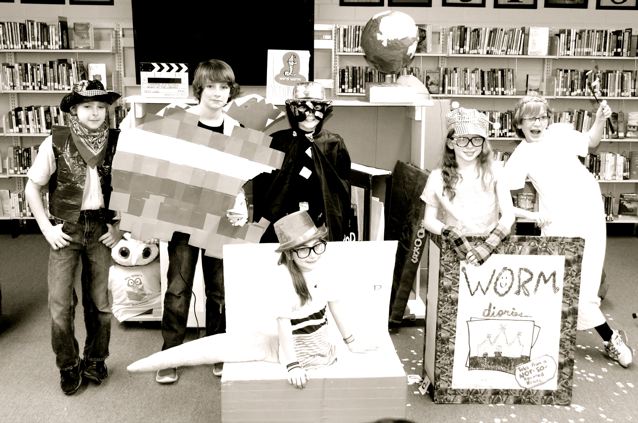 The charm of solutions to Odyssey of the Mind problems is that they’re scalable to the age and skill levels of the children taking them on, said Collingswood coach-organizer Kenneth Allendoerfer.

Rising to the challenge requires that kids harness a variety of complementary energies, from engineering knowhow to theatrical performance chops.

“Some of the things they can do as little kids,” he said; “they tape things together, they use cardboard, they use Legos and glue. When they get to be in middle school, they start making real stuff: sets you could use in a real play, machines that don’t fall apart.

“Now that they’ve done it for a couple of years, their abilities have increased, and they can actually do the things they think of.” 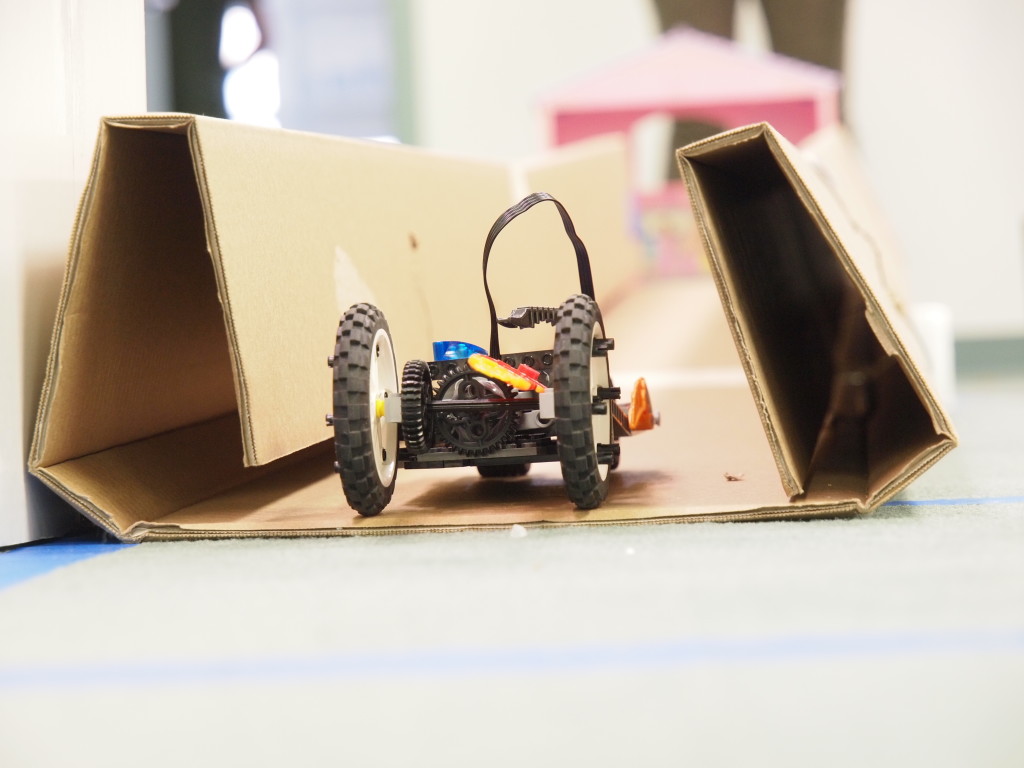 Collingswood’s “Runaway Train” team, for example, built a junkbot: a toilet-paper tube with a scrub brush hot-glued to the bottom and agitated by a spinning cork.

It operates like a swamp boat, Allendoerfer said, albeit one that must overcome obstacles, pull cargo, and fulfill a narrative about its journey.

“Pandora’s Box” challenges kids to update the classic morality tale with a retelling of contemporary evils released on the world.

Collingswood kids taking on the “Silent Movie” project elevated an intrusive AutoCorrect function to vaudevillian levels; another team redirected the prompt into a spoof on Cirque du Soleil.

The problems produce performances that Allendoerfer described as “charming in [their]thrown-togetherness. 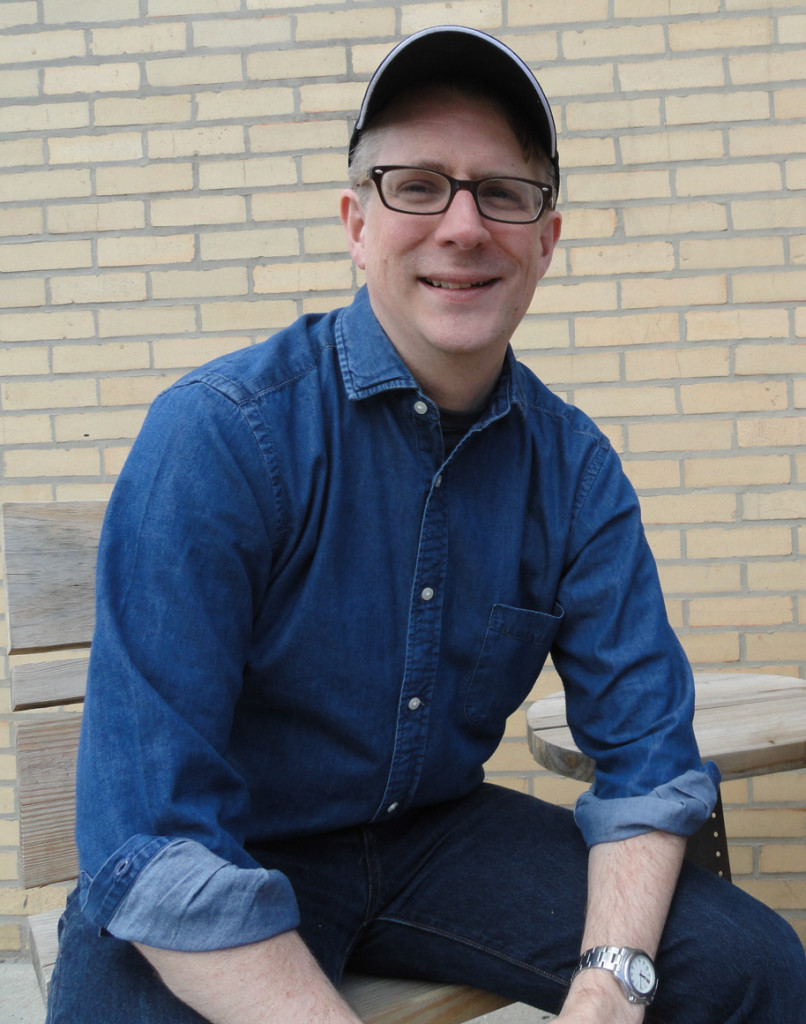 But “part of the deal is that the kids come to [these solutions] on their own,” he said; to interfere with the process would be to contaminate it.

“As coaches, we can make sure that they do their job and they don’t hurt themselves, and that they have snacks all the time,” he said.

“When it comes to writing, we give a little bit of feedback, but it’s supposed to be all them.”

Succeeding at the tournament level isn’t a condition of participation, either, which makes the competition emotionally healthy and supportive.

Instead of tracking kids’ achievements along a path of tropies, the milestones of their success lie in appreciating a diversity of solutions.

Allendoerfer calls the competitions a necessary “step along a continuum” of “truly amazing things.

“They see kids their own age doing things, but then they see older kids doing the same problem on a different scale…and it fires off their imaginations,” he said.

“Even if they don’t win, they see all these things and come back fired up.” 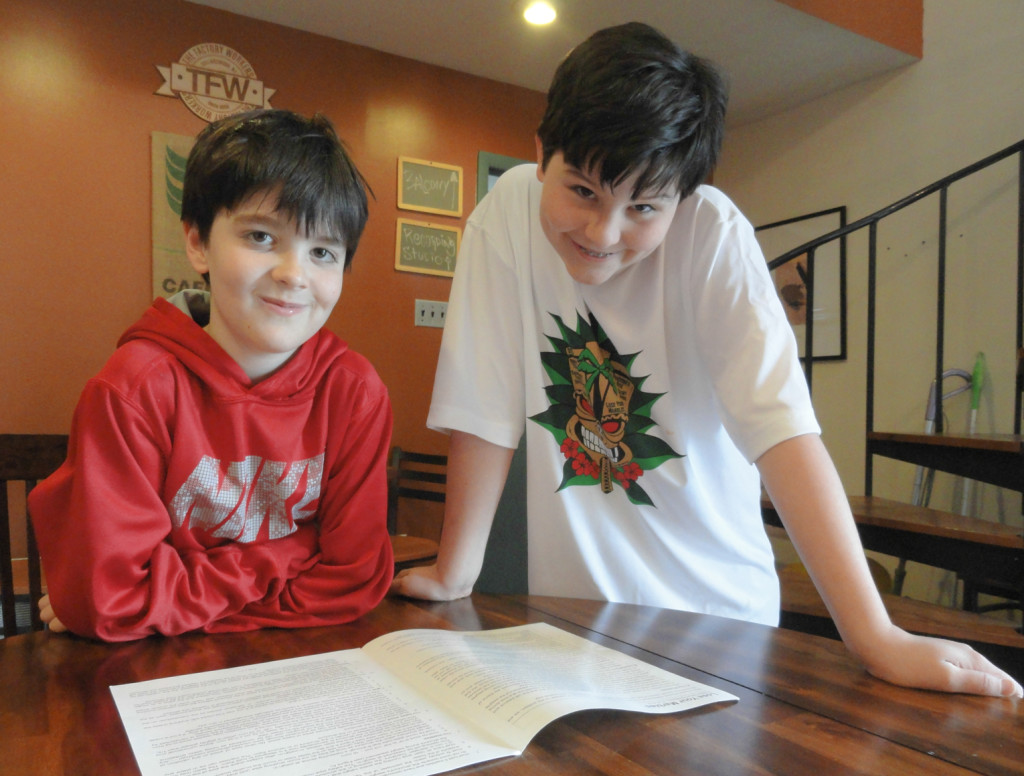 Diana Bertorelli said that Odyssey of the Mind gave her sons Paul, 11, and Mark, 10, “a lot of negotiating skills; a lot of teamwork skills,” even before the tournament.

“There’s a lot of wasted time,” she said.

“You might have a session where you don’t get anything done, and then the next session, lightbulbs go on.”

“It’s not directly related to what we do in school, but it’s good because it’s kind of like a lesson that teaches us to be creative and to solve problems as a team,” Paul Bertorelli said.

“On math problems it makes me think more out of the box,” Mark Bertorelli added.

The Bertorelli boys are two brothers on a team of siblings that includes James and Will Duncan and Ava and Owen Thomas. For the past three years, they’ve dedicated themselves to a problem called Lose Your Marbles, whereby they have to build an 18-gram structure of balsa wood and glue that can support as much weight as possible before snapping under the pressure. 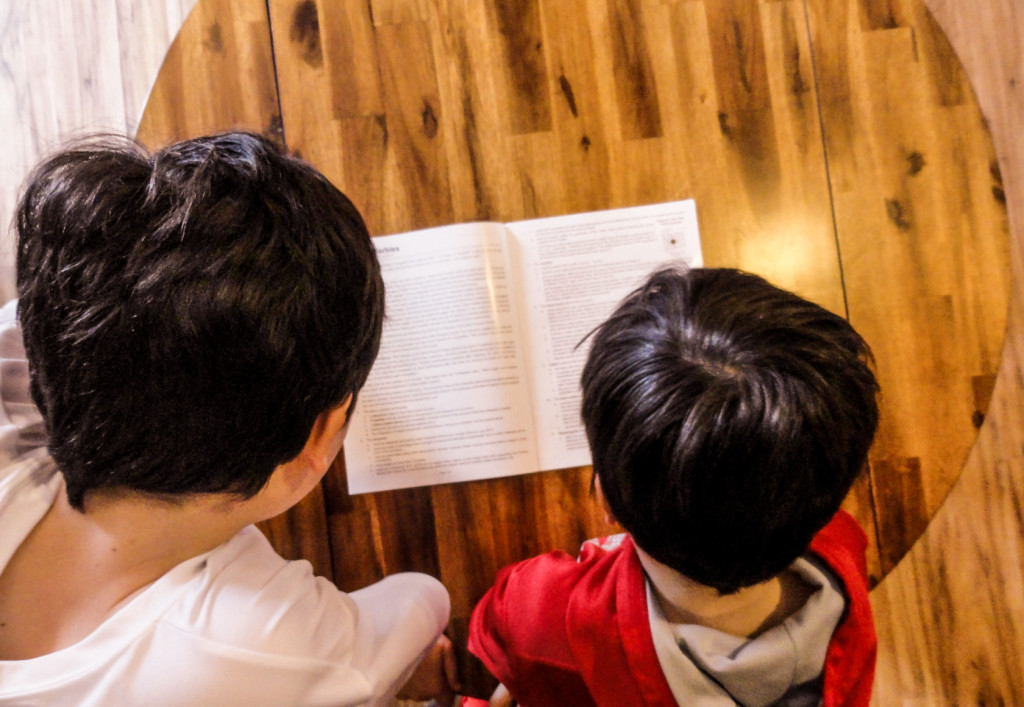 This year was the first time the structure held up in competition—but even if it’s successful, it’s destroyed in the stress test, meaning the kids have to rebuild their entire project before the state competition.

Mark Bertorelli called the project “really frustrating,” but also said, “We know how to do it because that’s all we’ve been doing for three years.”

“We would have quit this problem after the first year, but we didn’t,” said Paul Bertorelli. “We did it for another two years.

“I love this problem,” he said. “I wouldn’t have it any other way.”

Negotiating sibling rivalries lends a heightened degree of difficulty to the task, but overcoming those relationship hurdles has helped the children develop diplomatic and empathetic skills that they wouldn’t otherwise have had.

As child development experts emphasize that schoolkids need more “grit” and executive function abilities, they’d be hard-pressed to create an activity that so thoroughly provides them.

“You kind of have to tell somebody their idea is not a good idea, and that there’s an idea that might be better,” Paul Bertorelli said.

“You get to work for months, and then, the day of the competition, you’re so proud because you did it as a team together.” 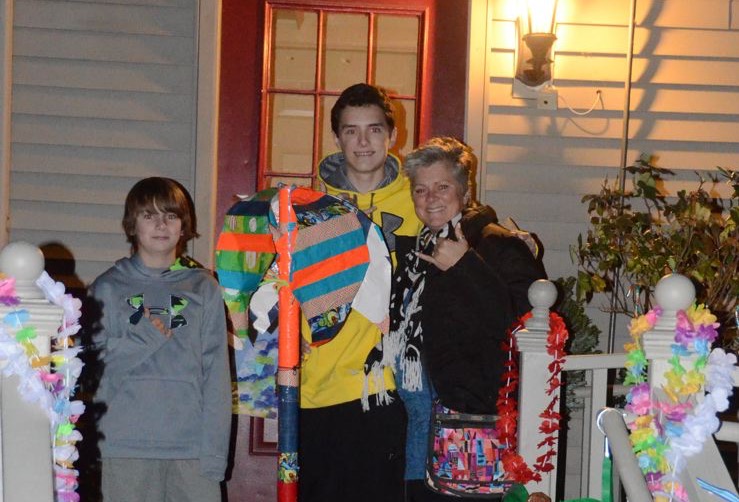 ‘An amazing, collaborative expanse of people’

Tracey Ricci, a nurse who coordinates the Haddonfield Odyssey of the Mind program, said it is her “only experience with a program that engages every aspect in your personality.”

Her 11-year-old son, Chase, is an athlete who “learned more from Odyssey than playing lacrosse,” Ricci said.

“You learn to step out of the limelight and step back into it with four or five other people.

When Chase’s elementary-school team didn’t advance in the competition, he became an assistant coach to his mother’s high-school team at Haddonfield. Ricci said it’s not uncommon for participants to find other ways to stay involved in Odyssey of the Mind. Volunteer judges may be former coaches whose children have aged out of the program. Some are former students who return to be officials. 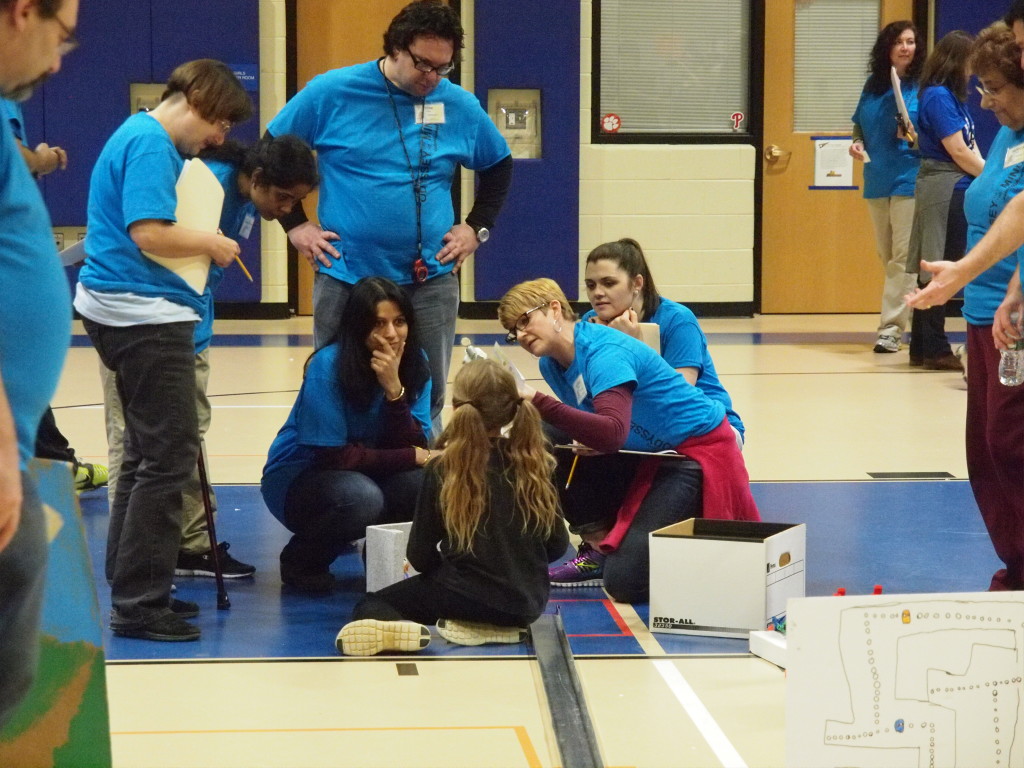 Ricci describes them as “this amazing collaborative expanse of people” around whom “sportsmanship is so uniquely discussed.

“Other teams are cheering you on and they’re your competitors,” she said.

“Ultimately, it’s getting to the high point that your team can get to. It may lead to an award. It may not, and that’s okay.”

Ricci counts herself as one of the atypical Odyssey of the Mind coaches.

Her involvement in the program was tied to Chase, but her older son, Colin Hough, also had been along for the ride—even as he battled a rare juvenile cancer.

When Colin died in late 2014, practices started the very next week, and Ricci was there for them.

Knowing the toll that the disease had taken on the family—Ricci, a nurse, cared for her son personally at home for three years—Hough had told his mom “do not give this up.

“Had he not said that, I’m not quite sure I would have done that this year,” she said.

“This entire season I wondered, ‘What the hell am I doing?’ because I drive to his school every day. We practice in the classroom of his favorite class, environmental science.

The perfect capstone to that year, then, lies in bringing Hough’s memory and all that it instills to the community that has supported them through it all.

When the Riccis and their teammates drive over to Haddonfield Memorial High School on Saturday morning, they won’t be going to practice; they’ll be going to compete.

And in a tournament that measures success in the experiences and friendships it inspires, they’ve already won.

The 2015 New Jersey Odyssey of the Mind state final tournament will be held at Haddonfield Memorial High School Saturday, April 11.

The main entrance opens at 8 a.m.; an awards ceremony is scheduled for 6 p.m. (all times approximate). There is no admission fee. Guests are advised to know their team’s problem, division, and competition times.