Trending
You are at:Home»Business»Keg & Kitchen Raises a Beer Garden in Haddon Twp.

Owner Kevin Meeker says his communal fireplace will be a unique attraction on Haddon Avenue. 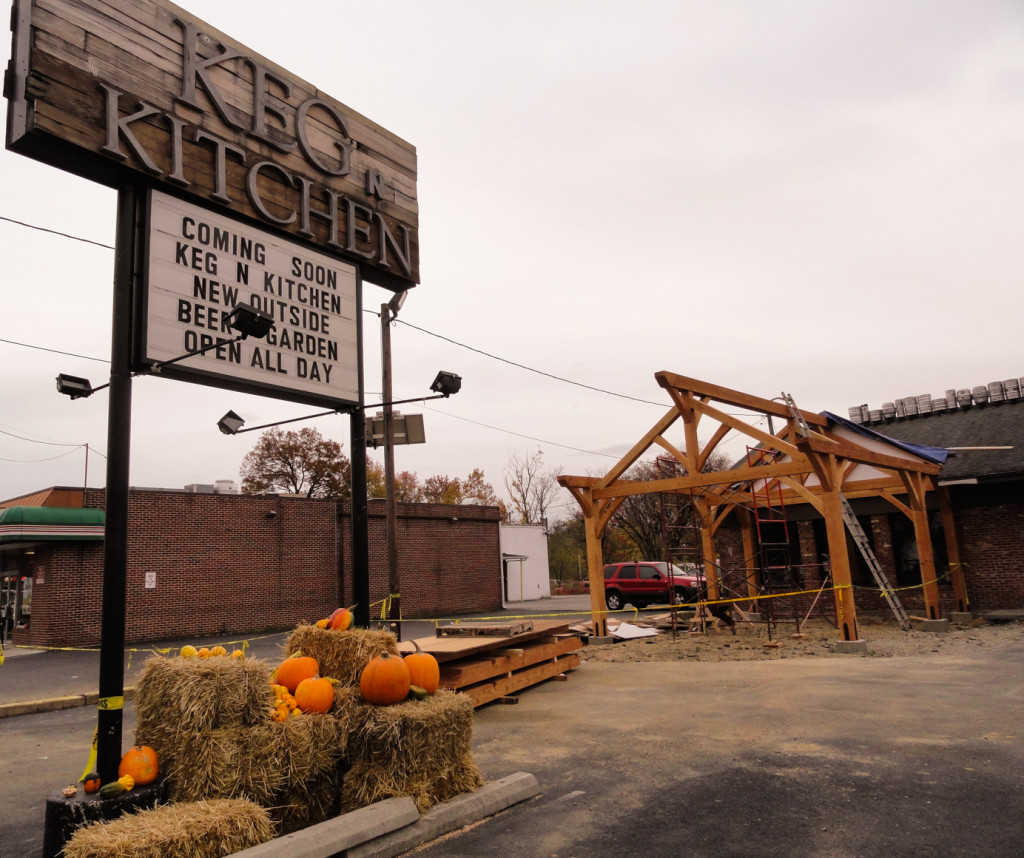 If you’ve ever wondered how the eponymous beer barrels got up on the roof of Haddon Township’s Keg & Kitchen, it’s a story best told by designer-builder David Dowling.

“I always wanted to be a part of American kitsch,” the Irishman confessed.

Restaurateur Kevin Meeker, who owns one of the few Haddon Avenue bar-restaurants that doesn’t belong to the P.J. Whelihan’s family of establishments, bought into the idea as a simple change that allowed the building to stand apart from the others on the road.

“When we put this place together, we did it without drawings,” Meeker said.

“It was a handshake. [Dowling] knows I’m open to his crazy ideas.”

Soon after, Meeker knew the move had paid off when a table of octogenarians told him, “We came in because we saw the beer barrels on the roof.”

Now the Keg & Kitchen roofline is recognizable from a distance, even to commuters on the PATCO Hi-Speedline. Meeker hopes that his latest collaboration with Dowling—an outdoor beer garden in the front lot of his establishment—will have the same effect for commuters on Haddon Avenue.

“I really want it to be a place where it’s not cookie-cutter,” Meeker said. “I’m hoping it’s something that adds to the neighborhood; adds to the avenue.” 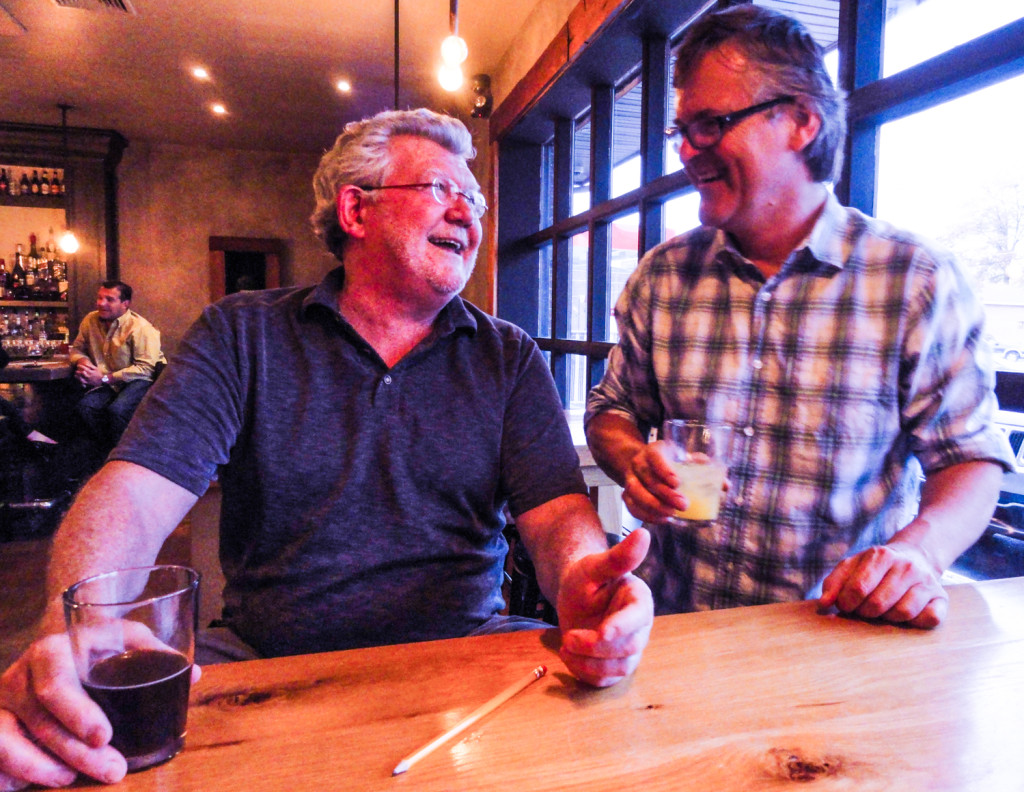 The decision to sacrifice even two or three parking spaces on a property, the rear lot of which overflows most weekends, is one not taken lightly.

But with hammers ringing in his backyard as the Albertson Village apartments take shape, Meeker believes that creating a community attraction within striking distance of the new housing project will pay for itself in foot traffic.

Meeker said his beer garden will be “something different” for customers who “don’t want the old sports bar” and aren’t afraid to sit and mingle.

“It’s a forgotten group of people [who]sit around the fireplace,” he said.

“Coming from Europe, this is what we do,” Dowling said. “We go to a bar to entertain ourselves.”

There’s entertainment hewn into the very bones of the structure as well: Dowling pointed out that much of the labor force of his projects, which include Philadelphia beer garden Frankford Hall, comprises moonlighting theatrical and film carpenters.

Amish-built and delivered from Mid-Atlantic Timberframes of Ronks, PA, the beer garden is framed out with locally sourced wood, and will be topped with a corrugated steel roof underpinned with black lattice. Living walls will add an organic touch that Dowling said will reflect what’s happening inside the bar and will contribute to the welcoming atmosphere.

A multi-function fireplace will serve as a combination chimney and furnace, with heated stones on either side. Meeker anticipates that the structure will seat 50 or 60 people. 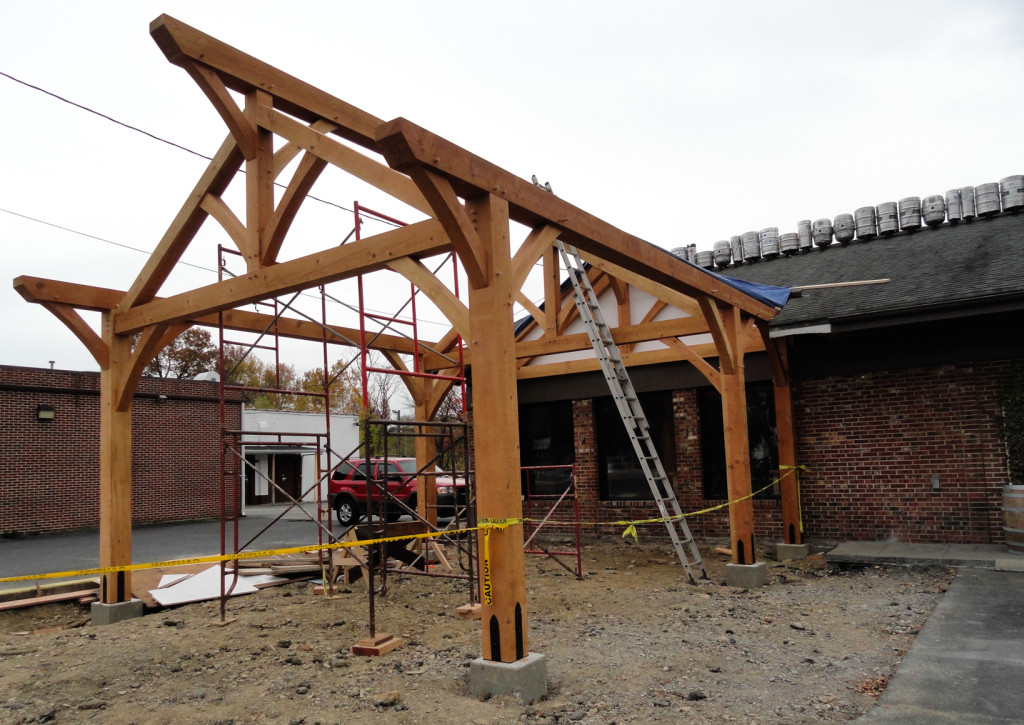 Dowling said his intention is to create “a wonderful meeting place” that is “comfortable yet rustic.

“People in these spaces have less inhibitions,” he said.

“Communal tables [are]constantly introducing new groups instead of having people in small parts looking for their privacy.”

Aesthetically, the trick for Dowling is to “rough it up a bit” once the construction is completed, the better to blend the beer garden in with the surrounding neighborhood.

He spoke of working to create a space “that’s empathetic with the history of the place.

“Normally with [new]structures, they’re very clinical-looking,” he said. “It’s going to be hard to determine its age.”

“I like to have it develop,” he said. “The restaurant on Cooper River, everything is predetermined. I don’t have the flexibility that I’m used to.”

Meeker said that although the beer garden will have some early adopters throughout the winter as it nears completion, he will formally christen it with “a big blowout in the spring.”

“Right now, because it’s so late in the season, it gives us a lot of time to develop and decide how we want it to be,” Meeker said.