Trending
You are at:Home»Business»Loudo Musical Instruments: an American-Made Guitar is Born in Collingswood

Luthier Peter Brown has been on a 20-year mission to reinvent the electric guitar. In 2019, he launches his own brand in the New Jersey tradition of companies like Danelectro, Guild, and Kramer. 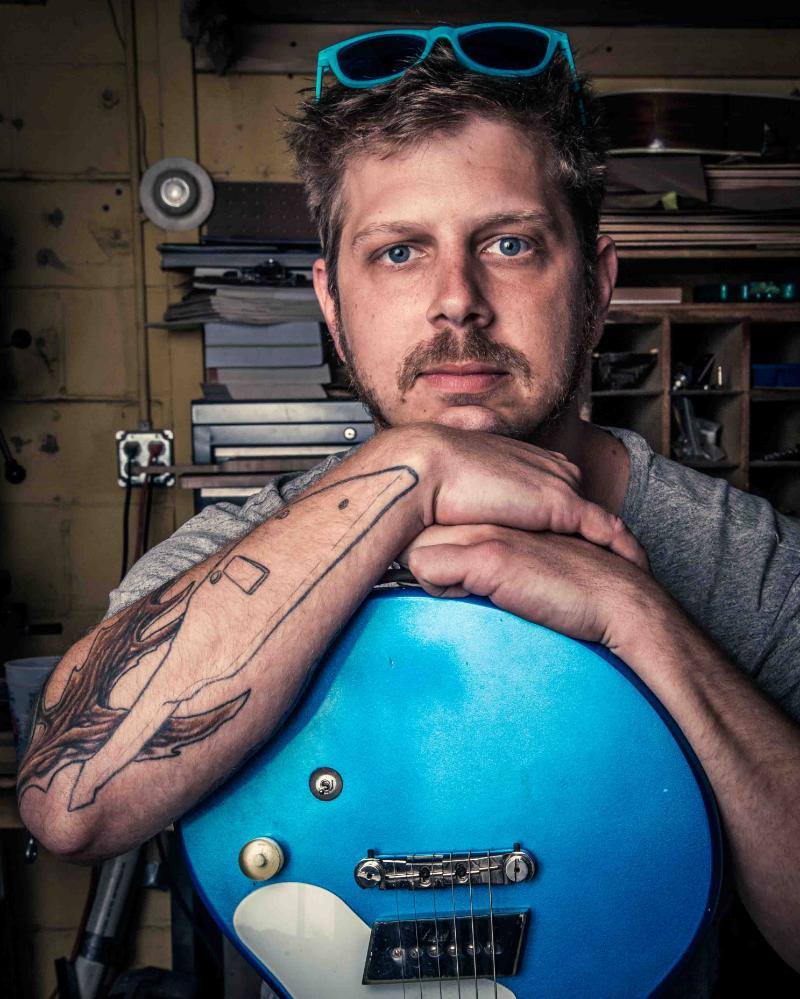 Before he’d ever learned to play a guitar, Peter Brown was wrenching on one.

At 14, he took apart his Squire Stratocaster, and then hastily reassembled it when he saw his mom’s reaction.

During his junior year of high school at Paul VI, a trip to the Martin Guitar factory only further piqued his interest in luthiery — the construction of guitars.

After abandoning a music major at Rutgers-Camden for want of funds (“I got a note that I made the Dean’s List the same day I got the [tuition]  bill,” Brown said), he spent nine months tuning pianos until the monotony wore him down.

It wasn’t until Brown discovered the Roberto-Venn School of Luthiery in Phoenix, Arizona, that he finally found his calling.

He sold his 1968 Ford Mustang for admission fees and a Greyound ticket, and set off for the Valley of the Sun.

“I was just young enough not to get into bars, which was perfect,” Brown remembers. “Any free time I had, I was at the school.

“What surprised me the most was how easy it was,” he said. “Everything just kind of made sense.”

At Roberto Venn, Brown trained himself to work long hours, performing complicated technical guitar repairs and honing in on elements of instrument design. He began to form his own theories about the craft of guitar-making, and set out to explore some of its mysteries.

“In the guitar industry, there’s a whole lot of mojo with how things work,” Brown said. “People know a little bit, and whatever you can’t explain becomes mojo. It seems to be one of those ways people sell stuff.

“I see it as a science,” he said. “If your mechanic tried to sell you on mojo, you wouldn’t take your car there.”

In the right circumstances, however, a little mojo can leave a lasting imprint. In winter, Arizona is “a drifter’s paradise” in winter, Brown said. He encountered people of every stripe at its drum circles.

One of them took a shine to his ideas about guitar-making, and told him, “You’re laudo,’” which his classmate interpreted as Latin for “praiseworthy.” 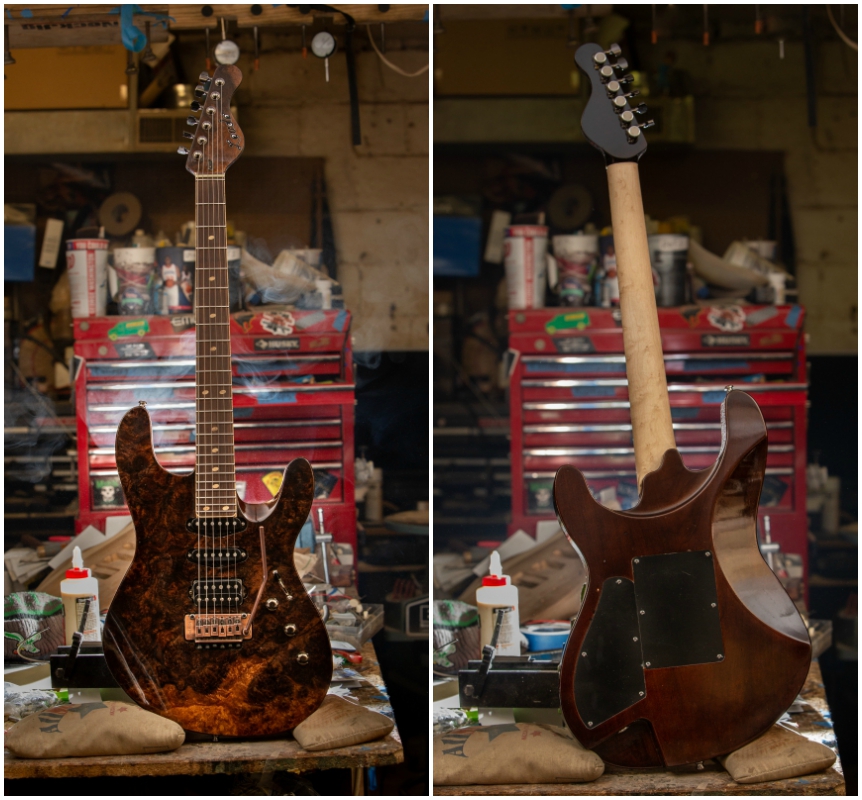 “I liked that a lot,” Brown said, and put the name in his back pocket.

He would spend the next 15 years restoring and rebuilding guitars, all the while refining the designs of his own instrument models.

Six-and-a-half years after that, Brown has finally built the infrastructure around the Loudo brand, and will begin delivering his first made-to-order guitars this month.

As a luthier, Brown’s chief influence is Leo Fender, the father of the American electric guitar, whose work he admires for its practicality and innovation.

The Imperium, Brown’s first Loudo guitar model, is inspired by an S-style guitar not unlike Fender’s Stratocaster, but with a hollow body that relieves weight, a fret-side neck cutaway for greater access, and a recessed input jack that mitigates cable damage. He’s designed a special version for left-handed players, a market that Brown says is frequently overlooked.

Brown wants the Imperium to be a mix of the familiar and the exotic. Its figured wood tops will be made of maple and mahogany, and its high-quality tonewood backs from ash, Spanish cedar, poplar, and limba. Necks will be built from maple, limba, “and any exotic woods you can get your hands on,” Brown said.

“Most luthiers build stuff that’s so off-the-wall that the market’s very limited, or they build stuff that’s regurgitated,” Brown said. “The fields I’ve studied aside from woodworking—jewelry-making, welding, CAD, metalworking, electronics design—there’s so many different facets of it.

“From doing years of repair work I’ve seen it all,” he said.

Brown also takes pride in sourcing as many of his components domestically as possible, and the Loudo is designed and built in America. Its truss rods are fabricated from Pittsburgh steel; his mother Ursula hand-winds the pickups.

Citing New Jersey’s heritage of guitar-making by companies like Danelectro of Red Bank, Guild of Hoboken, and Kramer of Neptune, Brown wants to put his Collingswood workshop on that same short list.

“There’s so many people in this guitar,” he said. “The whole musicians’ community in this area has gotten behind this project. It feels good to be able to contribute to that scene.” 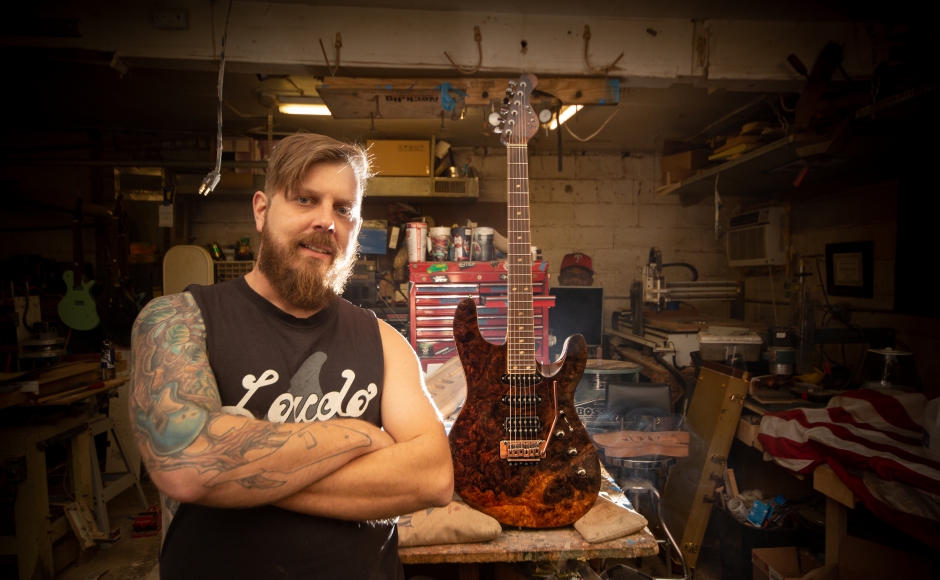 Perhaps most significant of Brown’s achievements with the Loudo Imperium is the versatility of tones it achieves without the use of after-effects.

Its sonic variations are engineered into the pickups themselves, and optimized via onboard electronics.

One of the first musicians to play the Imperium is Zach LoPresti, a longtime friend of Brown’s and Loudo’s first brand ambassador.

A talented improvisational player with the bands Gnarbot and Out of the Beardspace, LoPresti said the Imperium allows him to switch among a variety of feels on the fly.

“I enjoy playing a variety of styles that often require different guitars to get the job done properly,” he said. “The Imperium is a joy to play because it takes the best design features of guitars I’ve owned and loved for years, and combines them into one instrument.”

The Imperium’s design touches, like its cutaway and jack input, are inspired by years of live music, and reflect insights gleaned from working on myriad instruments and with different types of players, LoPresti said. Those features aren’t lost on veteran players.

“Pete has worked closely with thousands of local musicians for almost two decades, taking apart and rebuilding both super-common instruments and one-of-a-kinds,” said. “This has given him insight into what works for people and what doesn’t.

“[Brown] is not afraid to take practices that have stood the test of time and tweak them creatively to generate something new and inspiring to the musician, even if it takes a longer time to produce,” he said.

Shortening that timeline will be the work of Loudo shop manager Elliott Doyle of Glenolden, PA, a former motorcycle mechanic whose role it is to help Brown expedite the build-outs.

“The biggest part of me managing all this is to help Pete strike a better work-life balance,” Doyle said. “Pete spent six years developing the processes to build a guitar in a day. In 2019, we can focus on making everything happen in the amount of time where he has a little bit of his life back.”

Doyle and Brown said their skills and personalities complement one another’s. The longtime friends have played music together and toured the East Coast on motorcycles; sharing a business is the next dimension of their friendship.

“Together, we bring the correct toolsets to make anything we want to do successful,” Doyle said. “It’s nice having somebody who has all of your weaknesses as strengths, and vice-versa.”

At $1,400, the Imperium is priced like a hand-crafted instrument, and not a starter guitar.

“It’s not for the beginner,” Doyle said. “But if you are a beginner and you get this, it’s the only guitar you’ll ever need.”