Trending
You are at:Home»People»M4.1 Dover Earthquake Felt in South Jersey

The cause of the seismic event is as yet unknown to the U.S. Geological Service, but is believed to have been a natural occurrence.

A magnitude 4.1 earthquake that originated outside of Dover, Delaware Thursday evening is an uncommon occurrence, but likely a benign one, according to a spokesperson for the U.S. Geological Survey (USGS).

“We are aware that people are freaking out right now,” said geophysicist Jessica Turner. “We do know that Delaware does not get earthquakes very often.”

The quake was reportedly felt throughout Delaware, Maryland, parts of South Jersey and the Philadelphia region, according to the USGS “Did You Feel It?” map, which charts earthquake accounts. 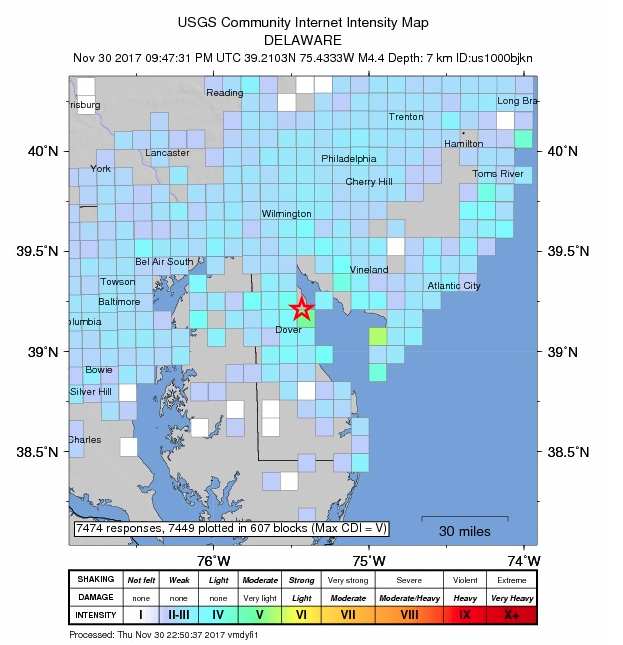 The USGS “Did You Feel It?” map of earthquake reports for Dover. Credit: USGS.

Around 6 p.m. Thursday, Turner said that scientists were still working to identify the origins of the quake.

Unlike other areas of high tectonic activity, fault lines beneath Delaware are not well mapped, she said.

Turner also said the earthquake was likely a natural occurrence and not prompted by any activity like fracking, but that reports are preliminary.

“We’re pretty early on in the process right now,” Turner said. “I think this is a natural earthquake as far as we know.”

Although a magnitude 4.1 earthquake is uncommon for the region, it will likely not have damaged much, if anything.

Aftershocks are possible, but would likely be less severe. The USGS rated the Dover event a “green” alert, which means a low likelihood of casualties and damage, with unreinforced brick masonry and reinforced masonry construction most susceptible.

“All the aftershocks are is that the Earth is trying to get back to normal,” Turner said. “It could just be the Earth has a little bit of stress in this area and it needs to be released.”

Residents who felt the impact of the quake are invited to log their details with the USGS “Did You Feel It?” form.