Trending
You are at:Home»People»Matt DeSanto Takes Record-Setting Wheel of Fortune Win in Stride

After breaking the game show’s single-game record on Friday, the modest family man is back at the office. 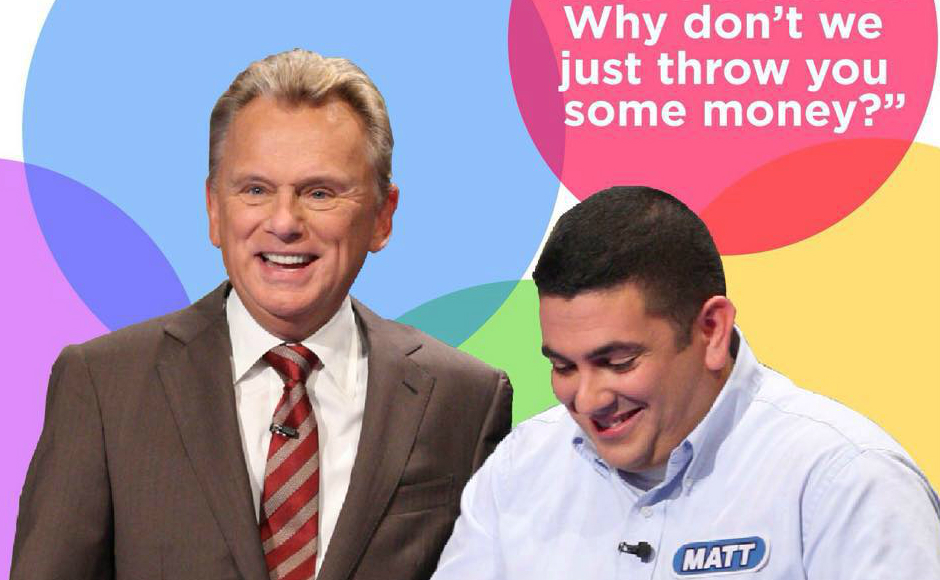 It’s 8:00 on a Monday morning, and Matt DeSanto is headed back to the office for another day of work, where his will most surely be the most sought-after story of the holiday weekend.

That’s because the South Jersey native became a national news story with his record-setting performance on Wheel of Fortune Friday night.

DeSanto took home almost $92,000 in cash and prizes, sweeping every round of the regular game, and even stunned audiences with his one-vowel solving of the game’s second toss-up puzzle.

But after a whirlwind weekend of congratulations from friends and strangers, segments on local news stations across the country, and a request for comment from Today, DeSanto is doing his best to tamp down the excitement and “take it in stride.

‘Can you defer me for a little bit?’

DeSanto’s cool demeanor could easily be misinterpreted until you consider the rollercoaster of stops and starts that got him to the winner’s circle.

He’s “fairly certain it was an online form submission” that earned him an invite to a Wheel audition in Virginia in February 2014. But when ice storms knocked out the power at his Malvern, PA home, DeSanto felt uncomfortable leaving his wife, Jennifer, and young sons, Joseph and Luke, to make the trip.

“I contacted [the producers and said], ‘I am not flaking, [but]can you defer me for a little bit?’” he recalled. “They said, ‘Sure, we’ll put you back in the queue. And then in July I got an e-mail again that said, ‘We’ll be in Brooklyn next week.’”

Auditions were held in blocks of 50, DeSanto said, and included simulated game play, hangman puzzles, and on-camera interviews. After making it through two rounds of hopefuls, the producers left the room to confer, and returned to dismiss the group.

“[They said], ‘If you get a letter from us in a couple of weeks, then you’re invited to be on the show,” DeSanto said. “If not, then the dream is over.”

After a couple weeks of checking the mailbox in vain, DeSanto couldn’t resist calling, just to make sure he hadn’t missed his chance. He was told the letters from his audition group hadn’t been mailed yet, “so I thought, ‘there’s still a chance,’” he said.

Finally, in August, the letter he’d been waiting for arrived, congratulating him for being selected as a contestant. Another came in mid-October, inviting him to Los Angeles by the end of the month. The family made some quick childcare arrangements, and caught a West Coast flight.

‘Those studio lights are hot’

Wheel of Fortune taped six shows on October 30, and DeSanto’s was the fifth game played that day. From 8 in the morning until their names were called, DeSanto and his fellow contestants tried to make the best of their nerves, and encouraged one another to all take home some money.

“We realized it’s us against the wheel, not us against each other,” DeSanto said. “When we got out there and started playing, I was more nervous because those [studio]lights are hot.”

After the first toss-up puzzle, DeSanto had paid for his flight.

By the second, he’d surprised everyone with his one-letter solution.

After the third and fourth, DeSanto had accumulated nearly $23,000 in cash and almost as much again with two vacation packages.

“Here’s a shovel; here’s some cash,” Sajak said, adding that the other players had “kind of run into a buzzsaw.”

(DeSanto said he was told afterwards that his tally was a “main-game record,” and that there have been four million-dollar winners on the show and other players who have won more than $100,000 in cash and prizes including the main game and bonus rounds.)

“I didn’t put it together because I was really trying to solve the puzzle,” DeSanto said. “I didn’t have a great grasp of that margin of victory. I was really rooting for my co-players.”

The full episode of DeSanto’s appearance is available on YouTube (above).

Whether his luck or skill had run out by the end, DeSanto wasn’t able to solve the final puzzle. He took one look at the letters, and, stumped, simply thanked Sajak for a good time. The flabbergasted host told him, “Well, say something!” but DeSanto could only come up with half the answer.

“Would it have been nice? Yes. Was I trying for real to solve it? Yes.” DeSanto said. “If I know it, I know it; otherwise it would take me more than ten seconds, and that’s all you had. I’m good. It’s been fun.”

Even sitting on the news of his victory for two months wasn’t difficult to manage, DeSanto said.

“You can tell people ‘Watch me on the show, it was fun, I did well,’ but they said, ‘Please don’t talk about dollar amounts,” DeSanto said of his instructions from producers. “I just interpreted that as ‘Shut your trap.’”

His winnings, however significant, will be taxed as significantly, DeSanto said; and although the vacations will be fun to plan, his family has very practical intentions for the extra money: preschool tuition for their boys.

“We even joked, my wife and I going out there,” he said, “if you win money: preschool. We’re very lucky in that regard.”

In fact, from top to bottom, DeSanto said, the entire experience has been a lesson in managing expectations.

“I expect nothing and hope for the best,” he said. “You get an e-mail…which was more than I thought I’d get. You can’t make it; you ask for another day, they say yes. I thought, okay, they’re really cool. It would seem like things are bouncing in my favor, but don’t get too excited. It seems to bounce into place, but [I’m] still not thinking I’m going to go sweep puzzles.

“Then you start playing, and it’s a very quick blur,” DeSanto said. “It’s a half an hour you’re onstage and offstage.”

DeSanto similarly regards his moment in the sun as likely to be just as fleeting.

“I’m sure someone [else]will do something exciting soon, and they’ll be the next hot topic.”