Trending
You are at:Home»People»Millennials Might Not be Fleeing NJ, But They’ve Still Got Generational Problems

A new report from a Trenton thinktank and Rutgers graduate students challenges the conventional wisdom around New Jersey’s millennial drain, and urges new policy solutions around it. 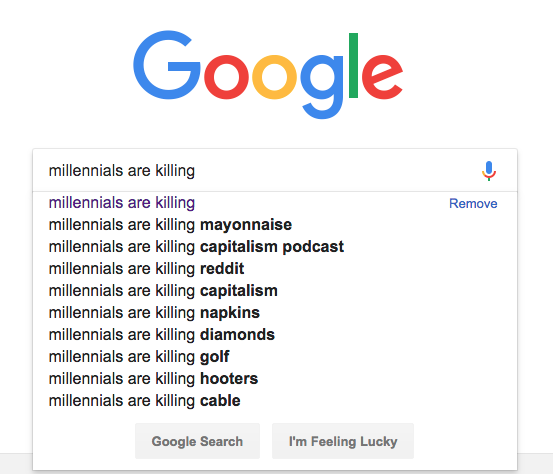 But in the digital age, perhaps none has become more of an epithet across every sector of American business and culture than the term “millennial.”

Defined as the age cohort of those born in the United States in the 20 years between 1980 and 2000, the millennial generation has been blamed for downturns in every sector from banking and home ownership to chain restaurants and cable television.

Shifting social attitudes bear their own sets of problems for various commercial industries, but when such assumptions begin to influence public policy, different consequences emerge.

The apparent millennial evacuation of New Jersey has been framed as a loss of talent, labor, and future prospects for economic growth statewide.

But what if young people aren’t jumping ship in record numbers—or at all?

The investigation started out as an examination of “the general convention that millennials are fleeing New Jersey,” said Brandon McKoy, Director of Government and Public Affairs at NJPP. 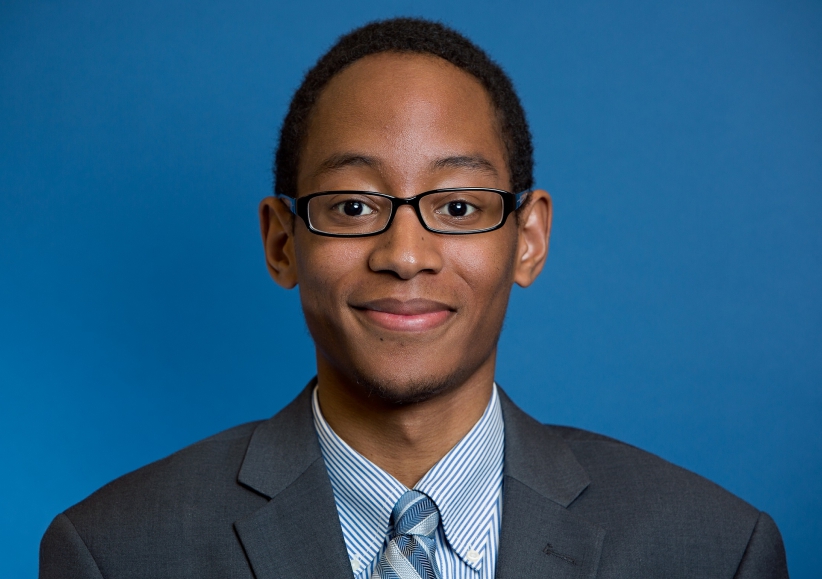 “There seemed to be this idea that millennials fleeing was a new phenomenon that we needed to tackle, and this report kind of pushes back on that,” McKoy said.

“It doesn’t mean that millennials aren’t facing important problems; it’s saying, ‘Let’s be smart, and let’s refine what the problem is.’”

As defined by the report (and elsewhere), those problems include an unsustainable debt burden and an inability to afford the costs of rents or a mortgage.

New Jersey millennials are the most likely in the nation to cohabitate with their parents, the report notes, with 47 percent of them doing so as recently as 2014. The state also ranks 14th nationally in greatest average college debt, with 61 percent of the Class of 2016 carrying student loans.

“Both are issues that afflict the entire millennial generation, but are important in New Jersey, which touts one of the best educated populations and the highest rate of parental co-residence in the United States,” the study notes.

So where does the millennial deficit enter into the conversation? 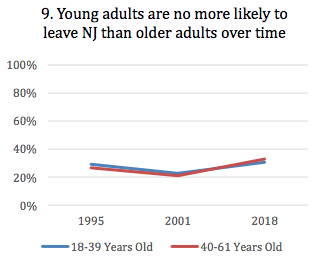 For a start, New Jersey’s population growth hasn’t kept up with national trends.

As a result, millennials comprise less of the New Jersey population (30 percent) than they do in other states (32 percent is the national average).

But historically speaking, they’re not leaving the state in record numbers.

Across a 12-year analysis, the study demonstrated “only a 0.4% difference in millennial in-migration rates.”

Just 6 percent of the state’s millennials left between 2008 and 2016, and most of those were college-aged (18 to 22). Perhaps more significantly, the data showed that “young adults have expressed a desire to leave the state at the same rate as their older counterparts for the last twenty years,” according to the report.

Plus, those numbers are comparable with circumstances in other of the northeastern United States, including New York, Connecticut, Pennsylvania, and Massachusetts, suggesting either a regional or demographic trend that isn’t isolated to New Jersey or its young people.

“Young people move around,” McKoy said. “They go and experience life. They go find job opportunities that they’re interested in. When you can go to really good colleges within three hours, that’s just going to happen.

“It’s a hard thing to say we’re going to fix that,” he said. “The goal should be to make New Jersey so amazing that they want to come home when they’re done.” 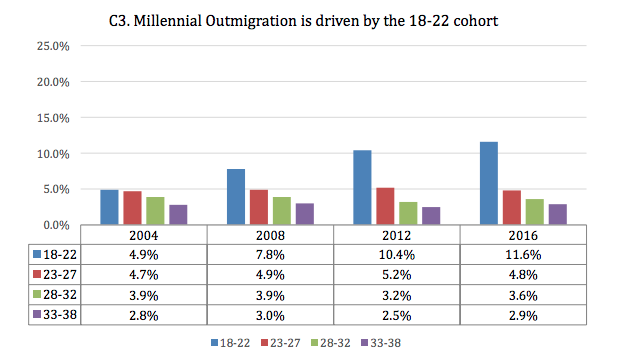 Most of the young people leaving New Jersey are college-aged students. Credit: NJPP.

On a qualitative note, the report also contains interviews with millennials about their favorite aspects of life in New Jersey (unsurprisingly, the state’s diner-and-shore culture drew special mention).

McKoy said these offer cues the state should take about how to differentiate its culture for young people.

“When you go elsewhere, you realize what is missing,” he said.

“I think we do ourselves a disservice when we don’t highlight our unique attributes and assets, and try to chase stuff that’s not central to our foundation of who we are.

“We are a bedroom-community state that’s girded by these two major economies of New York and Philadelphia,” McKoy said. “We need to provide affordable homes in interesting communities and cities, and we’ve got to move people affordably and reliably [via mass transit].”

McKoy’s chief objection to the millennials-are-fleeing narrative is that it’s been used to justify shortsighted policy decisions that don’t support creating a more affordable state for all New Jerseyans.

“I think a lot of industry associations have used this rhetoric of millennials fleeing to push for tax cuts,” he said. “I think that’s a mistake. It’s about more than this trickle-down austerity budget where we’re going to give away a bunch of tax credits to a bunch of companies and hope for the best. 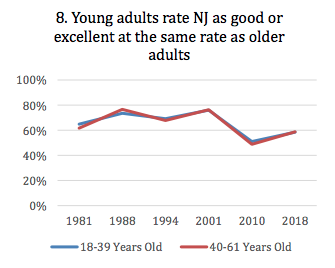 Millennials’ attitudes about New Jersey track closely with those of other residents. Credit: NJPP.

“What’s going to help millennials is a state government that invests in the infrastructure they rely on every day,” McKoy said.

“Make sure NJ Transit is as reliable and affordable as it used to be.

“Make sure our public colleges are getting enough general support from the state.

“It’s not all about cutting spending, or taxing our way out of the issue,” he said.

McKoy also cautioned readers of the NJPP study against taking away the wrong message from the report. Even if there’s no millennial shortfall, that doesn’t mean there aren’t concerns specific to their demographic.

“This is sort of a tough issue to communicate,” he said. “We’re not saying ‘nothing to see here’ as in, ‘no action to take.’ This is all about refining how we understand problems in this population space.