A new hatchery will allow the Camden County Mosquito Commission to drop thousands of tiny fish in stagnant water sources throughout the county, offering a native solution to its mosquito problems.

By Matt Skoufalos | Photos by Abby Schreiber and Matthew Scheuerer 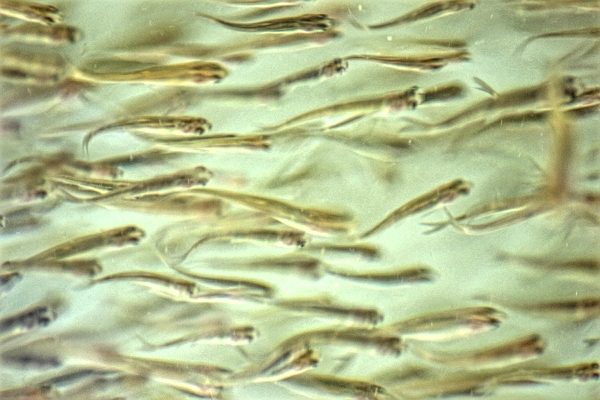 The biggest weapon in the war against mosquito-borne illnesses in South Jersey is only a few inches long.

The fathead minnow, which is typically used for stocking ponds before adding larger fish like bass, is a prolific breeder that feasts on insect larvae, and has been used as a biological insect control mechanism for years.

On Wednesday, Camden County imported a truckload of the fish to a new hatchery in Lindenwold. Officials say they will significantly improve mosquito control efforts throughout the southern part of the state with less reliance on chemical treatments.

As many as 650,000 fish have been distributed in the southern counties of the state annually. The new facility in Camden County will spare local environmental workers multiple, hours-long drives to restock their inventories.

“We’ve been fighting mosquitos as a state for 100 years,” said DEP Commissioner Bob Martin. “These are just steps we’re taking to stay ahead of it.” 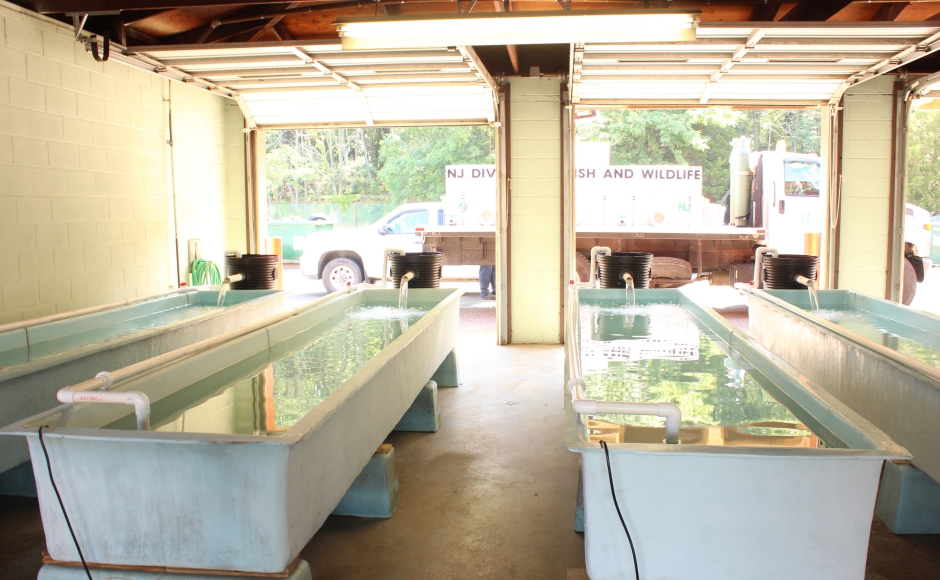 Jack Sworaski, Director of Environmental Affairs for Camden County, said inspectors from its mosquito commission originally got the idea to create the local hatchery after seeing some unused tanks in the Hackettstown facility.

Its multi-tank design helps prevent the spread of disease among the minnow population. In the wild, the fish themselves are “not going to be big enough for anyone to be interested in fishing them,” Sworaski said.

“If there’s a kill-off, we can restock [local waterways],” he said.

Craig Lemon, Superintendent of the Hackettstown hatchery, said that half the 40,000 fathead minnows with which the Camden hatchery will be initially stocked will remain there to be bred; the remainder will be distributed throughout the region. 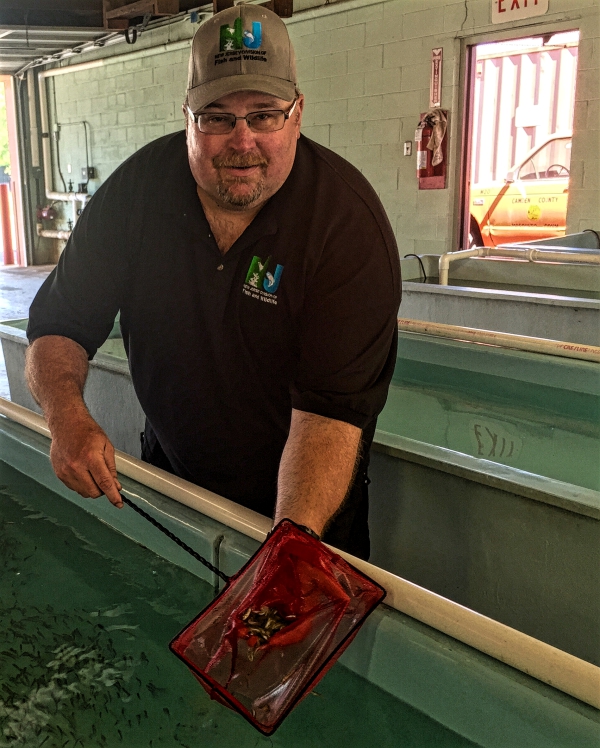 The fish are “hard to hold for long” in warmer temperatures, Lemon said, but become more tolerant of such environments in the wild.

“They’ll find their niche,” he said. “This is a transfer station.”

Lemon said the minnows are ideally suited for the task of insect control because they naturally exist in freshwater reservoirs, eat mosquito larvae, and propagate quickly.

“Fatheads will breed three times per summer, and live about three to five years,” Lemon said.

“Their offspring will breed this summer, too.”

The Camden County hatchery will also stock gambusia, a non-native, tropical guppy that is another natural predator of mosquito larvae. 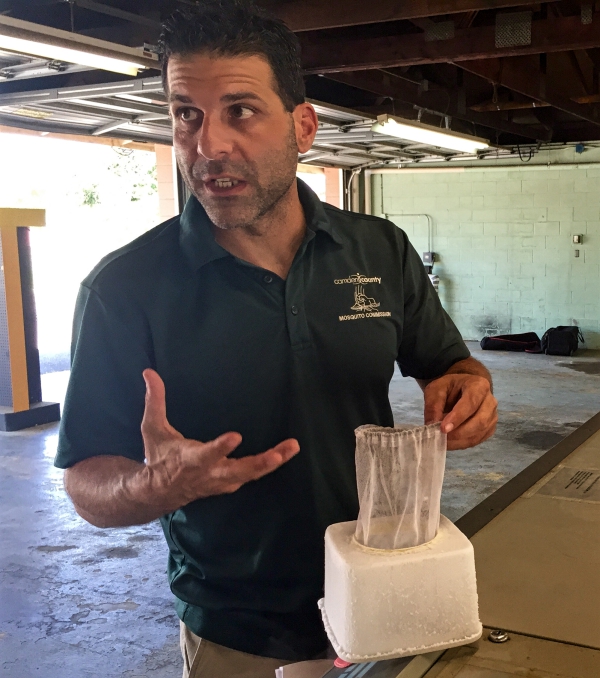 Dump as often as possible

As much as the commission gets requests for local sprays of insecticide, those treatments only kill adult mosquitos.

“We have spots that aren’t drying down,” Radano said. “Fish last and eat larvae.”

The commission also targets known breeding grounds with larvicidal “dunks” and motorized, battery-powered traps. Inspectors create “stinkwater,” a fermentation of grass and water, which lures the insects into a trap that is then harvested, frozen, and returned to the county laboratory for investigation.

The most common of the hundreds of subspecies of mosquitos in New Jersey is the culex, and the bugs do play a role in the local ecosystem, said biologist Lauren Segreto. As adults, mosquitos are pollinators, and as larvae, they’re a food source. County staff are hoping the minnows will take advantage of the insects’ second environmental role, but the most effective method of prevention remains clearing out pools of standing water.

“Everyone thinks if we go spray, it’s going to solve all of our problems,” Segreto said. “There’s no possible way they could spray every day. People need to dump [vessels of standing water]as often as they can.” 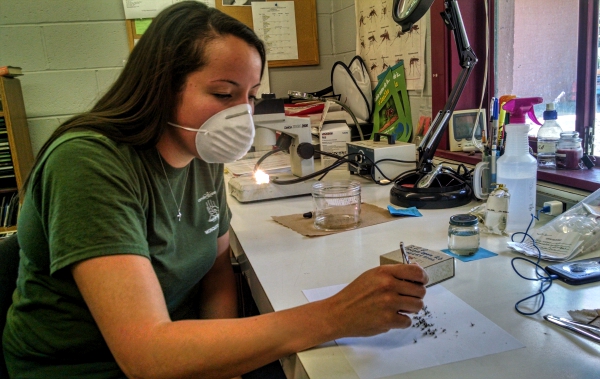 Not all mosquitos feed on humans, and only two are known carriers of the zika virus: the Asian tiger mosquito, which also carries West Nile virus, and the aedesi aegypti, or Yellow Fever mosquito.

Segreto said the former is “very ineffective” at spreading the disease, and the latter “is a more infrequent spreader.”

Many county representatives pointed out that there have been no cases of zika virus in New Jersey and no locally transmitted cases anywhere in the United States.

Segreto said New Jersey residents are at far lower risk for mosquito-borne illnesses than people in other parts of the world because their standard of living is far higher. 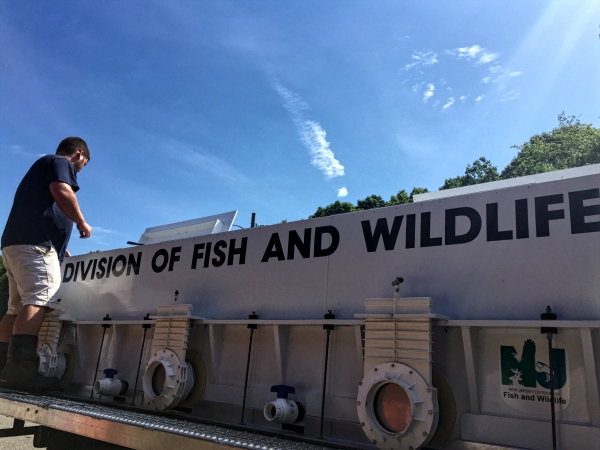 “We have screened houses, air conditioning, bug spray; everything we need to contain it,” she said.

Radano encouraged residents to “eliminate areas [of standing water]that are hard to get to,” including bird baths, gutters, and overturned planters.

He said the minnows should be helpful in neglected and stagnant residential swimming pools, another side-effect of New Jersey’s foreclosed and abandoned property woes.

Another of the most effective adult mosquito deterrents is a simple solution.

“Stick a fan out there,” Radano said. “It blows them away.”