Trending
You are at:Home»Business»New Chef, Same Address at Nunzio’s by Michael DeLone in Collingswood

After Chef Nunzio Patruno closed down the restaurant that bore his name during the COVID-19 pandemic, his one-time apprentice is making his own way on Restaurant Row. When he first met his culinary mentor, Nunzio Patruno, Michael DeLone was a young line cook joining the kitchen staff of the Monte Carlo Living Room in Philadelphia.

At that time, the Monte Carlo was already practically an institution in the city, approaching year 20 of its 25-year run in Old City, and turning heads with its decidedly European approach to Italian cuisine.

DeLone was a young chef coming off a stint in Manayunk that saw him advance from garde manger, to pasta duties, to working the line under Patruno’s tutelage.

He stayed there for four years, absorbing the wisdom of the veteran executive chef before moving on to Le Castagne in the Rittenhouse neighborhood, where he worked as a sous chef and, eventually, executive chef. But DeLone credits Patruno with helping shape his approach to the business at a young age.

“What I respect the most, and what I got out of it, was his knowledge; his hands-on technique,” DeLone said. “Coming from a high-volume place, learning how to butcher and fabricate fish and meat, and make sauces and pastry, and have all that at his fingertips really blew me away. That taught me, and pushed me to get better.”

Some 20 years and a few more experiences after the fact, DeLone was closing in on his own restaurant on Passyunk Avenue when he got a message from Patruno: “Call me.”

“I hadn’t talked to him for so long,” DeLone said. “He reached out to me and said, ‘Do you know anyone looking to buy a restaurant?’ We just jumped into this.”

Since that conversation, DeLone has followed in Petruno’s footsteps, not only culinarily, but as a chef with a solid reputation in the city who’s making the jump from South Philly to South Jersey. Now, after a little less than a year in Collingswood, he’s working to distinguish his own approach to Italian cuisine from that of his forebear. 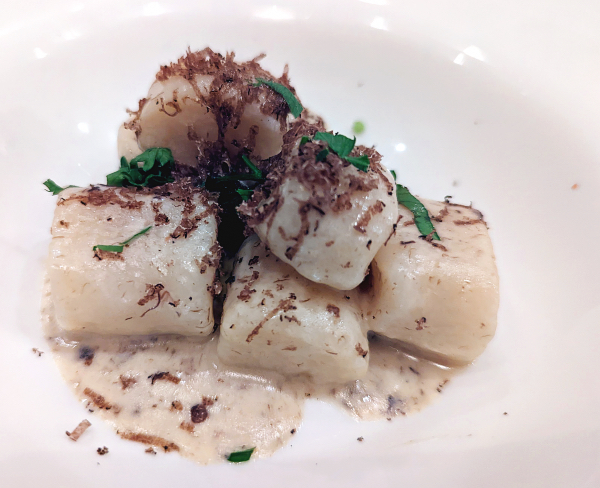 “Ever since Nunzio came over, he put this place on the map,” DeLone said.

“He was one of the first to jump in over here.

“It was always a nice, inviting neighborhood; a tight-knit group,” he said.

Since Petruno closed down Nunzio’s Ristorante Rustico during the novel coronavirus (COVID-19) pandemic, however, DeLone said his former customers haven’t necessarily picked up on the changes, or that Petruno was no longer in the kitchen there.

“By the time I opened back up, you’re two years forgotten,” DeLone said. “When we first turned the lights back on last year, we were getting a lot of his old customers in, and there was a lot of confusion.

“I tried to keep some of his classics, with my spin on it, but they really weren’t grasping it,” he said. “It was kind of an uphill battle.”

Although DeLone said he’d always planned to overhaul the elaborate interior design at the restaurant, which is modeled after Petruno’s hometown of Castellana Grotte, he’s closer to a total rebranding within the next year. 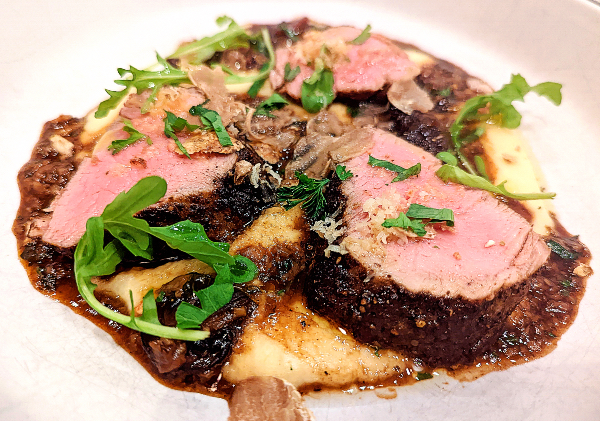 Along the way, the chef also learned to trust his own instincts in the kitchen, and break away from the legacy dishes that he believed Petruno’s followers would want.

Those results, although slow to emerge, are starting to show themselves.

“I’m still treating this as a new restaurant, trying to build on getting the word out.”

DeLone is keenly aware of the prevalence of Italian cuisine not only in South Jersey, but expressly on Restaurant Row in Collingswood.

He distinguishes his dishes from traditional recipes by trying to coax novel flavors from ingredients in ways that restaurant-goers might not have come to expect.

“It’s not your classics,” the chef said. “I think that just keeping it different, maybe adding one different ingredient, really changes things. I’m really into fresh ingredients, local, and new and different. We want people to come experience what we bring over here.”

To DeLone, “different” means pushing the menu “a little more coastal,” with pastas that feature touches from squid ink, saffron, citrus, and black pepper to reveal the character of the dough. A wood-fired grill adds char to proteins and vegetables; whole-fish plates showcase the chef’s skill in the kitchen as well as the freshness and quality of the ingredients.

A recent, truffle-inspired, prix fixe menu revealed DeLone’s versatility and subtle treatment of an ingredient that can be an overpowering centerpiece to build around. 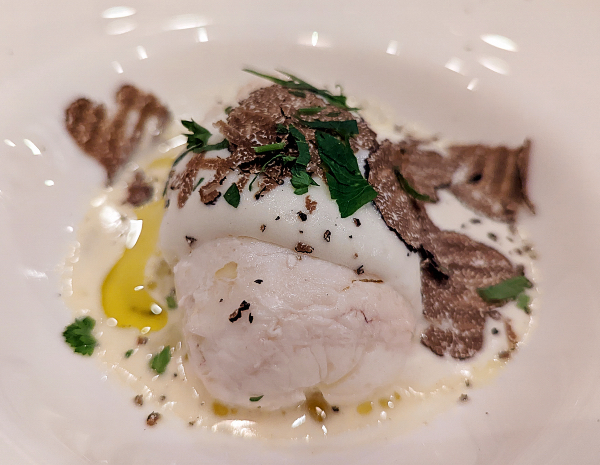 From truffled eggs on toast, to a filet of sole with scallop mousse, truffles, and beurre blanc potatoes; to chocolate truffles with vanilla mousse, caramel, and gold leaf, the chef showcased his talents with the aromatic delicacy through five courses, and didn’t miss a step.

“I’m not reinventing the wheel of Italian food, but it’s a more refined Italian,” he said.

“I’ll learn ‘til the day I die about food, but I’m not trying to come up with something that someone didn’t already do.

As if he needed any other evidence that it was time to follow his own perspective, DeLone said he heard it from the proverbial horse’s mouth about a month-and-a-half ago, when Petruno came in for dinner.

As the two chefs chatted tableside, the old maestro gave his one-time apprentice his full vote of confidence.

“He said, ‘There’s only one thing left to do, and that’s rip the name off the window,’” DeLone said.