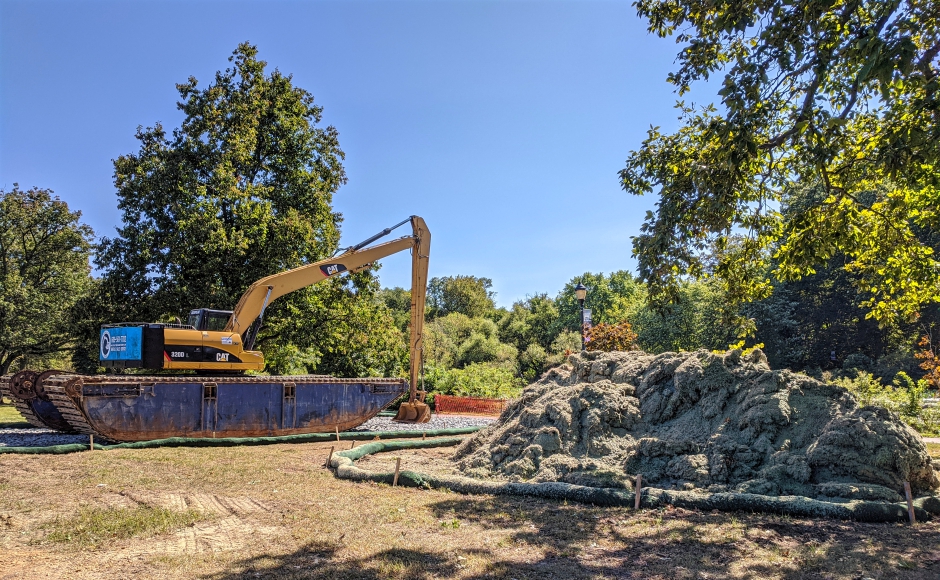 The initial phase of the $20-million, three-phase Newton Creek waterway improvement project, first announced in August 2018, has been underway for the past three months.

In late summer, dredging equipment from Mobile Dredging and Video Pipe (MDVP) of Chester, Pennsylvania began to line the banks of the waterway, scouring the first of some 257,000 cubic yards of silt from its depths.

Since then, two bodies of water—“Pond Number Two,” situated at the intersection of Bettlewood Avenue and North Newton Lake Drive in Collingswood, and the nearby Nichols Pond—have been mechanically dredged and completely restored. Dredging in a third section of the waterway between Bettlewood and the White Horse Pike also has begun.

These changes are coming more than a century after Newton Creek and its surrounding parkland were created as part of the Works Progress Administration in the 1930s. At the time, far fewer houses and paved surfaces occupied the landscape there.

But its builders also unwittingly ridded the area of swampland, which is important to the ecological health of the waterway, and the 80-plus years of environmental changes that followed only compounded those problems.

As a result, Newton Creek has been plagued by ongoing issues, including the impact of residential development, stormwater and sewer outflow, and runoff from fertilizers that boost algal growth in the waterway.

The dredge is intended to improve the flow and quality of water through the creek, rehabilitate the surrounding parkland, and manage stormwater in a flood-prone area, said Camden County Parks Director Maggie McCann Johns. These improvements also are intended to create recreational opportunities for future generations and safe habitats for local wildlife. 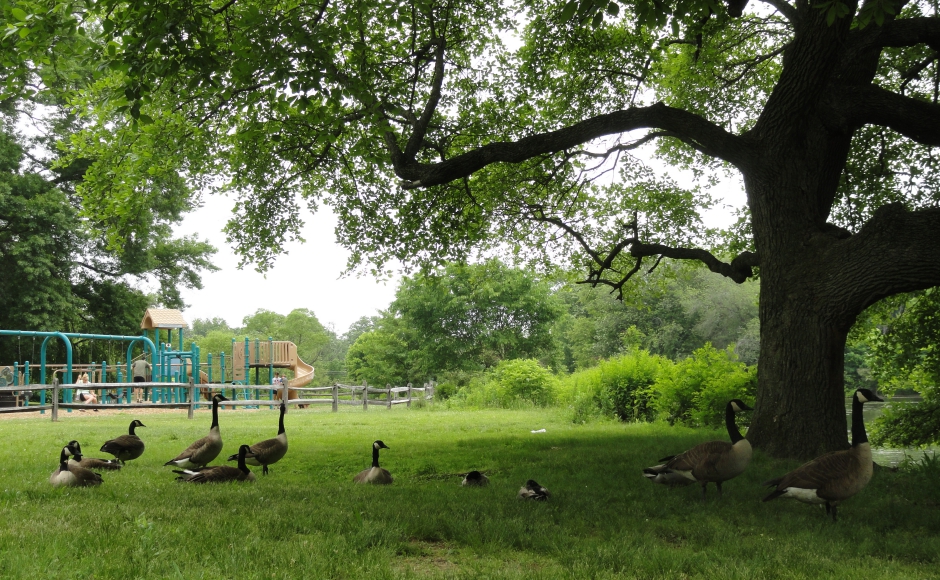 Throughout the summer and fall of 2020, crews worked as many as 12 hours a day, six days a week on the project.

These efforts are largely weather-dependent, so if the winter is mild, the work could continue, said Camden County Municipal Utilities Authority (CCMUA) Director Scott Schreiber.

However, per New Jersey Department of Environmental Protection (NJDEP) permit regulations, dredging can only occur for six months consecutively, which means the latest that work could continue into the spring would be March 15, when it would be halted again for the spring spawning season.

Dredging would next resume in July 2021, continuing for six months at a time until the project nears its estimated completion date in 2022. The work is being financed by the county at minimal interest on a 30-year loan from the New Jersey Environmental Infrastructure Trust.

When it’s completely done, the creek will be dredged to a five-feet depth in its center, Camden County Deputy Administrator Dominic Vesper said.

Hydraulic dredgers pump a slurry of silt and water from the bottom of the creek beds at Newton Lake and Peter Creek into mechanical dewatering stations at the Newton Lake Park boat ramp (White Horse Pike and Newton Lake Drive) in Collingswood and the Oaklyn Cougars football field (220 West Cedar Avenue).

Flocculants, which help bring loose particulate contaminants together, have been added to the slurry to thicken it before reintroducing it to the creek after treatment. (Environmentalists in the Newton Creek Watershed Association had advocated for flocculants.)

Newton Lake Park has been largely open throughout the project, save the dewatering site at the White Horse Pike and the Newton Lake Park boat ramp. Access to the water has been prohibited during dredging activities. 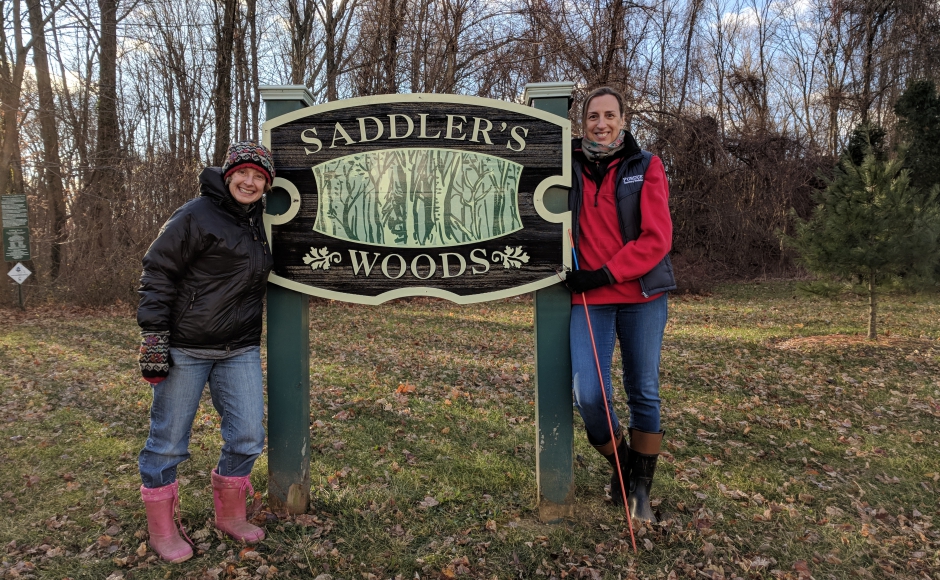 Throughout the public participation phases of the project, a handful of engaged residents have kept a close eye on the plan and its potential impact on local wildlife as well as on community stakeholders.

Some 20 members of the Newton Creek Watershed Association (NCWA), who hail from four communities that border the waterway, are physically monitoring the dredging project.

By all accounts, the relationship between concerned residents and the county has been extremely cooperative and positive. NCWA member Lorraine Prince said the group has no complaints about the process to date.

“We haven’t had to be barking watchdogs, we’ve been simply watchdogs,” Prince said.

Schreiber said he’s proud of the county’s community engagement efforts around the dredge.

“I feel like we’ve really done our best to incorporate public comment and feedback on an ongoing basis for the project,” he said.

The only mishap so far came at the end of September, when a heavy day of rainfall flooded Nichols Pond, contaminating the yard of a property on nearby Belmont Avenue and bringing down an old oak tree. The pond, which had been dammed at Merrick Avenue in preparation for dredging, “jumped its banks in a big way,” according to NCWA, which suggested that “some forethought would have made this preventable.”

“The subcontractor needs to answer for that,” Prince said, worrying that the same crew could overlook comparable conditions during the county’s upcoming restoration project in nearby Saddler’s Woods.

“We know [the crews]  have no intentions of hurting anything. But if the subcontractor is just as careless in Saddler’s Woods as they were in Nichols pond, then we’ve got a lot to worry about,” Prince said. 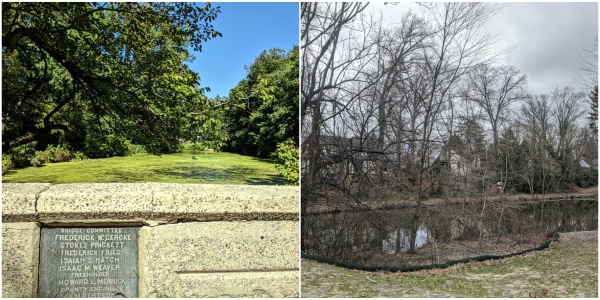 Nichols Pond before and after dredging in 2020/2021. Credit: Matt Skoufalos.

Schreiber said that the county, the construction manager, and the contractor in question responded promptly to address the flooding, and have since created a “wet weather plan” to prevent future incidents.

“We’ve taken it very seriously,” he said. “The real issue is that the pond and lake sections were above their banks, so there really wasn’t anywhere for the water to go.”

One of the places most heavily affected by the project, Oaklyn Cougars Field, lies at the very edge of the project, along Peter Creek in Oaklyn.

The field, which borders the Oaklyn Public Works depot at the end of West Cedar Avenue in Oaklyn, is the site of youth football and cheerleading games and practices. Given the toxic components of the silt extracted from the waterway, remediation of the field before children return to play there is another chief public concern.

The site was chosen because it is one of the few nearby open areas large enough for dewatering the larger sections of the creek, Schreiber said. No children will be using the field during the dredging process, Oaklyn Mayor Greg Brandley said, adding that he is unaware of any long-term effects of using the field for dewatering.

In November 2020, Cougars Field was leveled and paved over with asphalt, and environmental protections were established in preparation for the 2021 dredging season. McCann Johns said the field will be restored with upgraded amenities after the project concludes. The county government, NJDEP, and the contractor are all concerned with containing the dewatering process and removing dredging sediment from the site.

“We feel very confident that will not be problem,” Vesper said, adding that environmental testing was done at Cougars Field prior to securing the permit for the dewatering site. 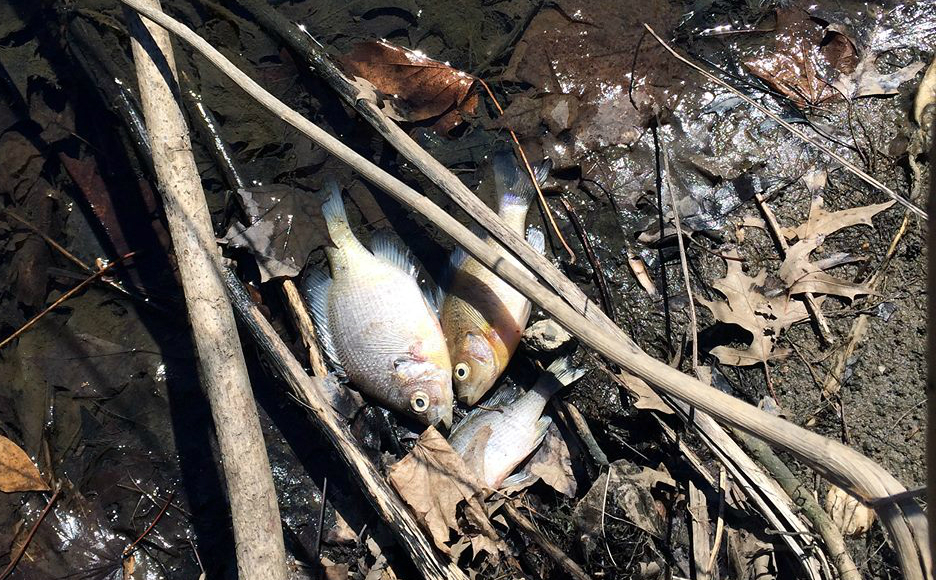 Photos of a fishkill in Newton Creek. Credit: Lorraine Prince.

Life on the waterway

Since 2003, when he started fishing Newton Creek, Lewis said he’s seen the issues the waterway poses for anglers.

Vegetation can overwhelm the creek, adversely affecting water quality and its navigability by boat. Furthermore, its current fish population isn’t required to be relocated during the dredging, and Lewis is worried that if they’re not rehomed for the project, they may not return to their current quality and size for years.

Lewis is also watching how the project manages the remaining habitat structures that comprise the shoreline, including lily pads, riparian reefs, and the dense vegetation in which other animals make their homes.

McCann Johns said that although it’s possible the dredging may negatively impact aquatic species in the short-term, the project will benefit the species overall in the long term.

Schreiber promised that the county will be following NJDEP guidelines for the protection of marine life, and are working closely with MDVP to ensure that the project adheres to tight controls.

“This is a highly regulated project,” Schreiber said at a public meeting in early September. “We’ll be working closely with our construction manager and with Jerry and his team to make sure that, at all times, we’re complying. 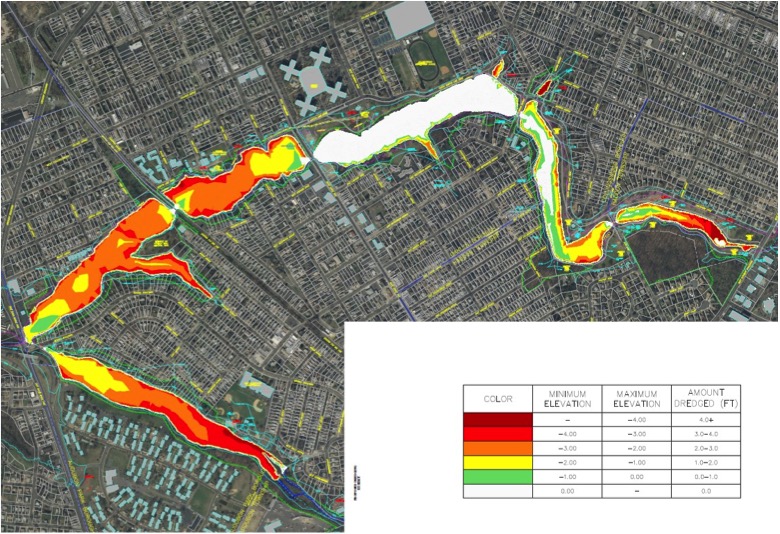 “We very much value our relationship with the DEP,” he said. “We don’t intend to do anything to harm those standards during this project.”

Lewis also asked officials how they would meet the expectations of those residents who haven’t been following the project closely, or who may be more concerned about property values, recreation, and aesthetics than environmental aims.

He worried that after the work is concluded, residents whose properties extend to the banks of the waterway may be unclear on their individual responsibilities for helping to preserve the riparian buffers at its edge, thus preventing erosion.

“There’s expectations and there’s going to be realizations,” Lewis said.

“As we have explained the project the last couple of years, I think we’re meeting all the expectations that we set out to meet in order to complete the project as designed,” Vesper responded. 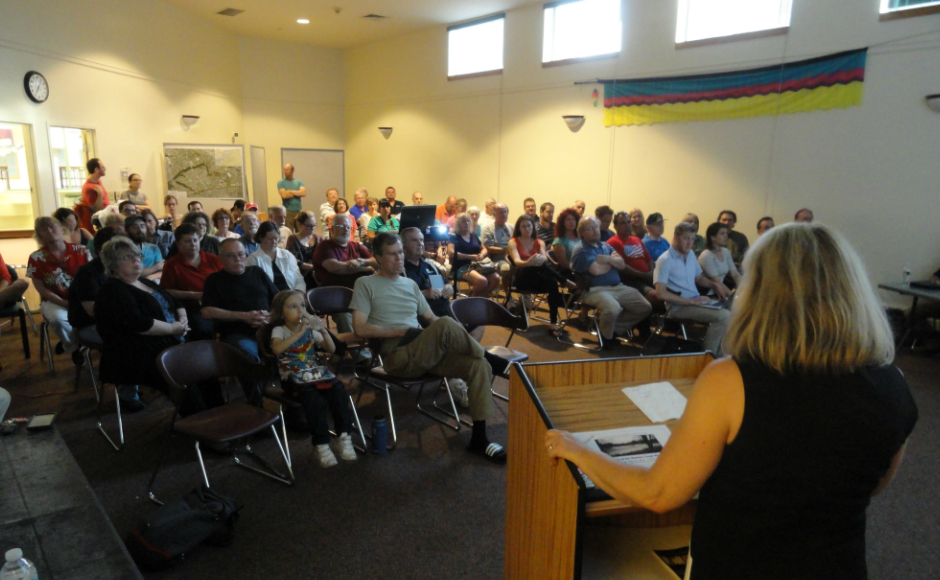 Concerns about the state of Newton Creek have been on residents’ minds since 2015, when the county first held community conversations about its cleanup. Credit: Matt Skoufalos.

‘I care about all lakes, but this is my lake’

The most severe environmental issues, especially those deeply linked to climate change, never could be solved by individual actions alone.

A 2017 study from the Carbon Disclosure Project (CDP) found that since 1988, 100 companies have collectively accounted for 71 percent of all global greenhouse emissions, the primary driver of climate change.

In order to avoid meaningfully changing their own practices, those same companies have gone to great lengths to deflect responsibility for those emissions onto individuals.

However, individual people can have a significant impact on this dredging project, as stormwater runoff from lakefront properties and those in the adjacent neighborhoods cause so many of the environmental problems there.

Prince has lived near Newton Creek in Collingswood for more than 35 years; in the last five of them, she’s become an expert on local environmental issues by working with NCWA.

“I care about all lakes, but this is my lake,” she said. “This is the one I choose to care about, and that I feel like I can do something for.”

“This is what excites me about being involved in environmental things, because this lake is something I can have something to say about what happens,” Prince said. “This is hyperlocal stuff, and that’s where people can make a difference in their environment.”

Prince encourages residents to use rain barrels and rain gardens to redirect stormwater away from the creek. Pointing rain gutters to their lawns, rather than the street, helps recharge underground aquifers rather than overwhelming the lake. Prince also advocates for discontinuing use of fertilizers and pesticides, which can eventually travel into the creek, contributing to algal growth.

Volunteers aren’t the only ones motivating interest in these environmental issues, however. The Camden County Office of Sustainability, Division of Environmental Affairs, and Parks Department also lead waterway clean-ups and educate residents on best environmental practices.

“We’re really at an advantage in Camden County, with the taxpayers, the residents, and the environmentalists who have an interest, who have told us what to look for, and what to be careful [about],” Vesper said.

“So, when we educate the public, in my opinion, we have increased our team members by those who are keeping an eye on it and giving us what they’d like to see as the educational piece to go out to the residents to let them know what’s going on,” he said.

“If you’re looking for any kind of [volunteer]  activity, you can find it just at the end of the street, where the water is running into the storm drain,” Prince added.

Residents with questions or concerns about the project can call the Newton Project Hotline at 856-583-1297, e-mail newton@ccmua.org, or attend any of the monthly public meetings at which project updates are delivered.