Trending
You are at:Home»Government»NJ Assembly Hears Lobbying on FY2016 State Budget in Collingswood 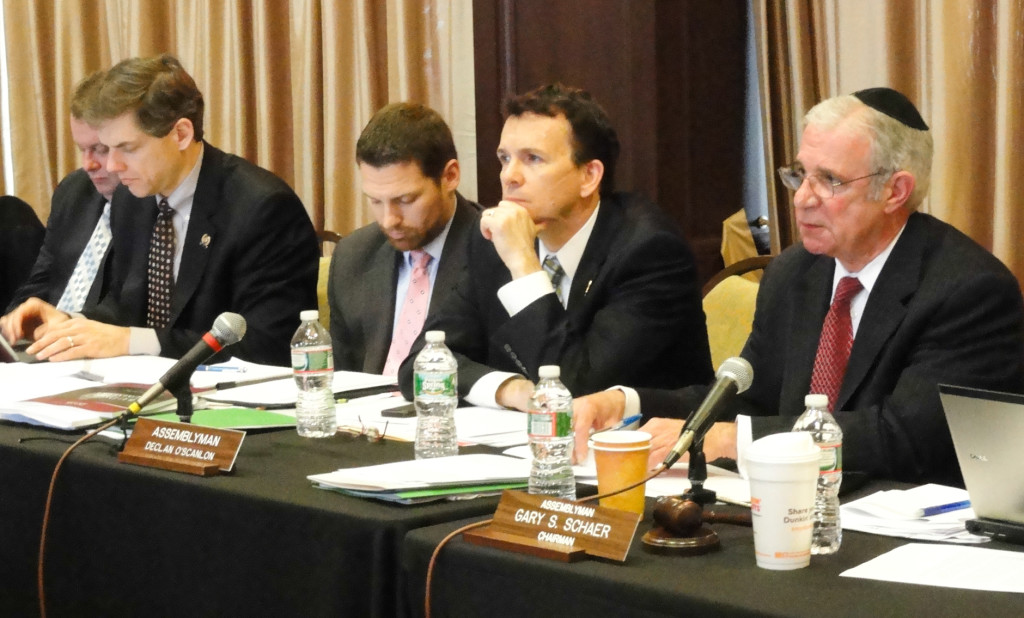 On the second stop in their 2015 statewide budget tour, New Jersey assemblymen and women heard remarks from lobbyists, organizers, and business executives on the $33.8 billion financial package at the Scottish Rite ballroom in Collingswood.

A roster of some 25 speakers delivered more than three hours of public testimony on Wednesday, asking the panel to dedicate funds for a number of causes.

Parent and professional advocates for charter schools from low-income areas of the state, including Trenton, Vineland, and Camden City, asked the committee to equalize funds for the parallel instruction they offer.

Dale Caldwell, CEO of Village Charter School in Trenton asked the assembly to reconsider the date from which state aid is calculated for charter schools, saying that an October enrollment cap doesn’t take into account students who switch school districts before the end of the school year.

“Wherever the kids go, the dollars would follow,” Caldwell said. “A budget reallocation that incentivizes quality education needs to be a part of this budget.”

Caldwell also argued that charter schools should be allowed to negotiate directly with educators instead of with public-school teacher’s unions, suggesting that waste inherent in the system doesn’t reward district or individual performance.

“So often it’s been a battle between unions and charter schools because they think we’re taking their money,” he said. “If charter schools are doing better than the local district, I think there’s some real examination of why that is.”

Judy Savage, Executive Director of the New Jersey Council of County Vocational-Technical Schools, asked the assembly not to forget about the needs of trade-based schools in New Jersey, for which even level funding from the state does not address rising costs.

Locally, the money for these schools comes from county freeholders who “are generally facing their own spending caps and rising costs,” Savage said, which especially hurts trade programs that require ever-increasing consumables such as food, chemicals, auto parts, and cosmetology products in their annual operations.

Savage said that 20 of 21 county vocational-technical schools are slated to receive less aid as a result of such policies despite an 8 percent statewide enrollment increase. 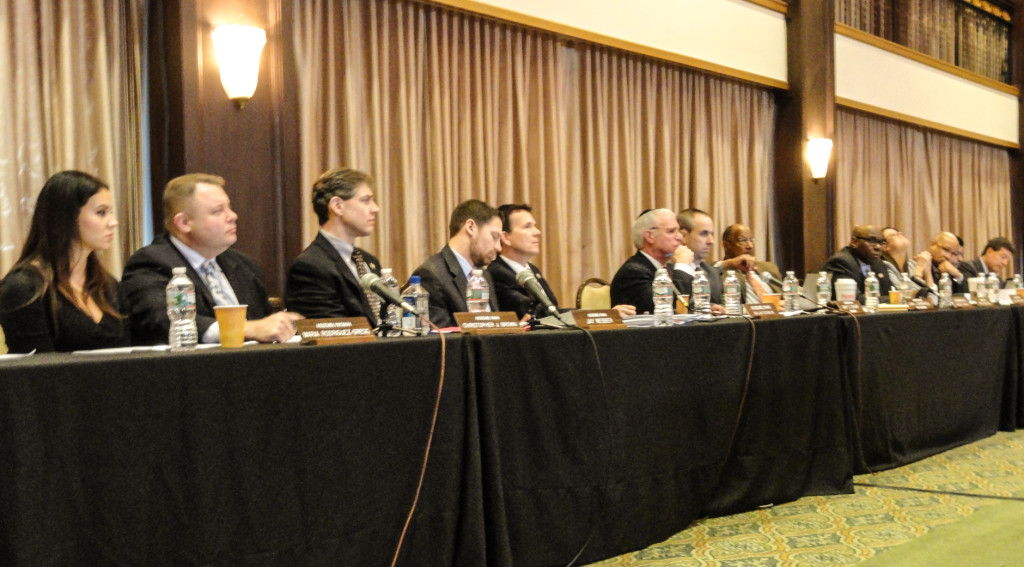 Deborah Cornavaca, Legislative Director for the New Jersey Working Families Alliance asked the assemblymen and women to take the state Economic Development Authority (EDA) to task for failing to effectively report the outcome of billions of dollars in corporate incentives provided by the state.

“There’s been a reliance by this administration to cut business taxes to subsidize growth,” Cornavaca said. “New Jersey now owns the record…for giving away corporate tax breaks. The Department of Revenue has not provided the information necessary for us to evaluate the efficacy of these programs.

“New Jersey Working Families is requesting a full and complete moratorium on any further EDA grants until there is compliance with your existing laws for the reporting on these programs,” she said.

Comavaca’s remarks were met with broad interest. Although Republicans and Democrats differed on approaches to stimulating the state economy, the idea of attaching more detailed reporting to the incentives appealed to both camps.

“I agree that we just have to find a way,” said Assemblyman Declan O’Scanlon (R – Marlboro); “argument is not substantive enough. You can’t make the definitive statement that our business tax cuts haven’t worked. They may very well have worked. We just don’t know.”

“We in the legislature as well as the executive have been guilty of not attaching expectations to the outcomes of these programs,” said Assembly Chair Gary Schaer (D – Passaic). Schaer likened New Jersey to a $33.8-billion corporation in which he might not have chosen to invest, but is nonetheless a de facto shareholder.

“Where we are right now seems to be questionable in terms of what is the plan besides hoping more revenues come into the state in terms of economic development,” Schaer said. “Unfortunately, things are not changing.”

Assemblyman Jay Webber (R – Parsippany) said that he would be interested in finding ways to help incentive dollars make their ways to small business owners rather than “major corporations who tend to get the attention.

“Smaller businesses don’t get access to those subsidies or even those tax breaks,” Webber said. 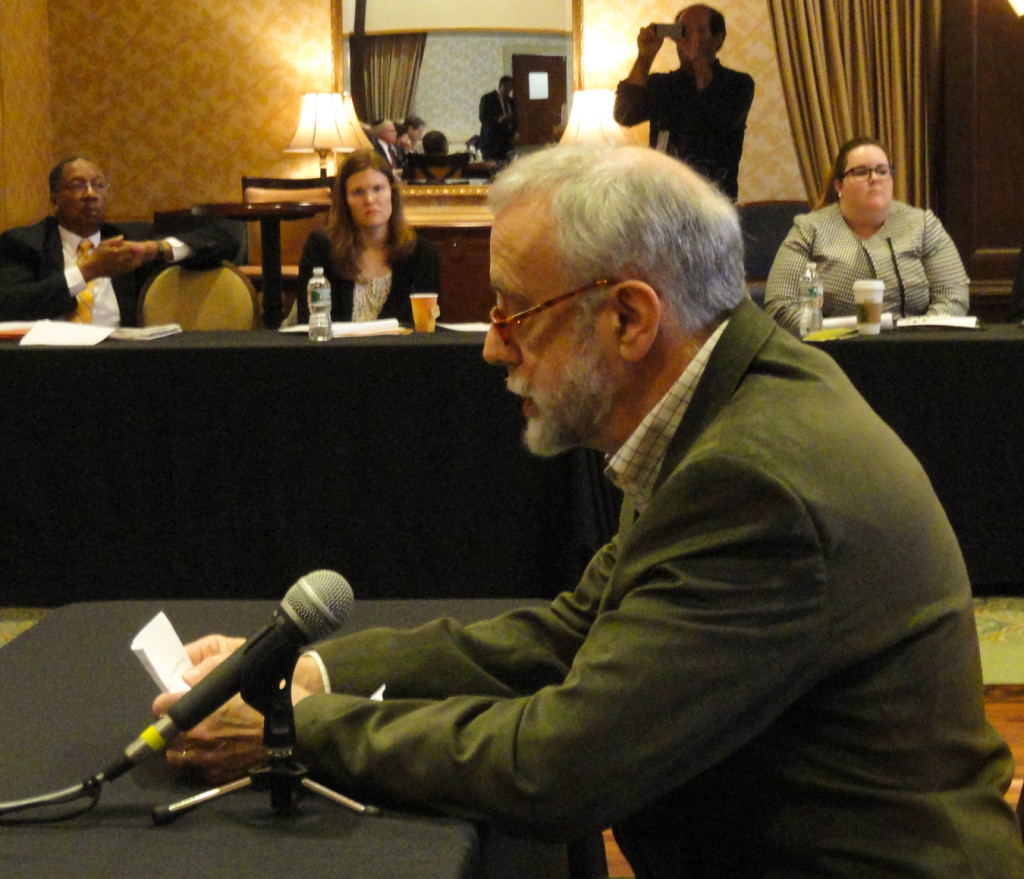 Advocates of historic preservation also took their case to the panel, arguing that the dollars allocated for the maintenance and rehabilitation of the state’s historic places is insufficient to keep up the fight.

“It’s so little in the proposed budget that it may threaten the existence of the trust,” said Jack Abgott of Preservation New Jersey.

“The state’s own agency has identified capital needs of well over $700 million in this state, so $10 million a year is just a start.”

Abgott pointed out that the matching grants capital programs that benefit state historic preservation are “perfect private-public enterprises” and “a worthy and a necessary investment for the future of this state.

“Historic preservation is a lot more than just our heritage or places to take school field trips or museums,” Abgott said. “It’s actually an economic issue. Every planning study of the last 30 years shows that historic interests are a stimulus for creating tax income [and]interest in viable towns.

“There’s not a planning official in this state at any level that doesn’t consider historic preservation part of their arsenal for creating a better New Jersey,” he said, adding that when such places are abandoned, the loss is “total and final.

Historic architect Margaret Westfield, whose efforts helped get the Champion School in Haddon Township on the national register of historic places, said that the maintenance of historic places often gets overlooked in conversations about open space and farmland preservation.

“You guys need to go back and look at the way the money’s being split up,” Westfield said. “They’re all good things to accomplish but you need to give preservation its fair share.”

“We’re talking about a shrinking part of a shrinking pie,” said Chris Perks, a trustee of the New Jersey Historic Society. “The community is used to seeing about $6 million a year. That money gets spent in New Jersey. It doesn’t go anywhere else.”

“Only your historic buildings are what give your communities that character,” Perks said.

“Without a million-dollar state grant, we probably wouldn’t be in this building,” added contractor Theodore Nickles of Haddon Heights. “The town mothers and fathers insisted on preserving the main street [of Collingswood]. This town is vibrant now because of historic preservation.”

Assemblyman John F. McKeon (D – Madison) noted that the assembly is “working on a bipartisan implementation bill” that he described as “a work in progress” as far as establishing an allocation for historic funds. The bill is making its way through the agricultural subcommittee, McKeon said. 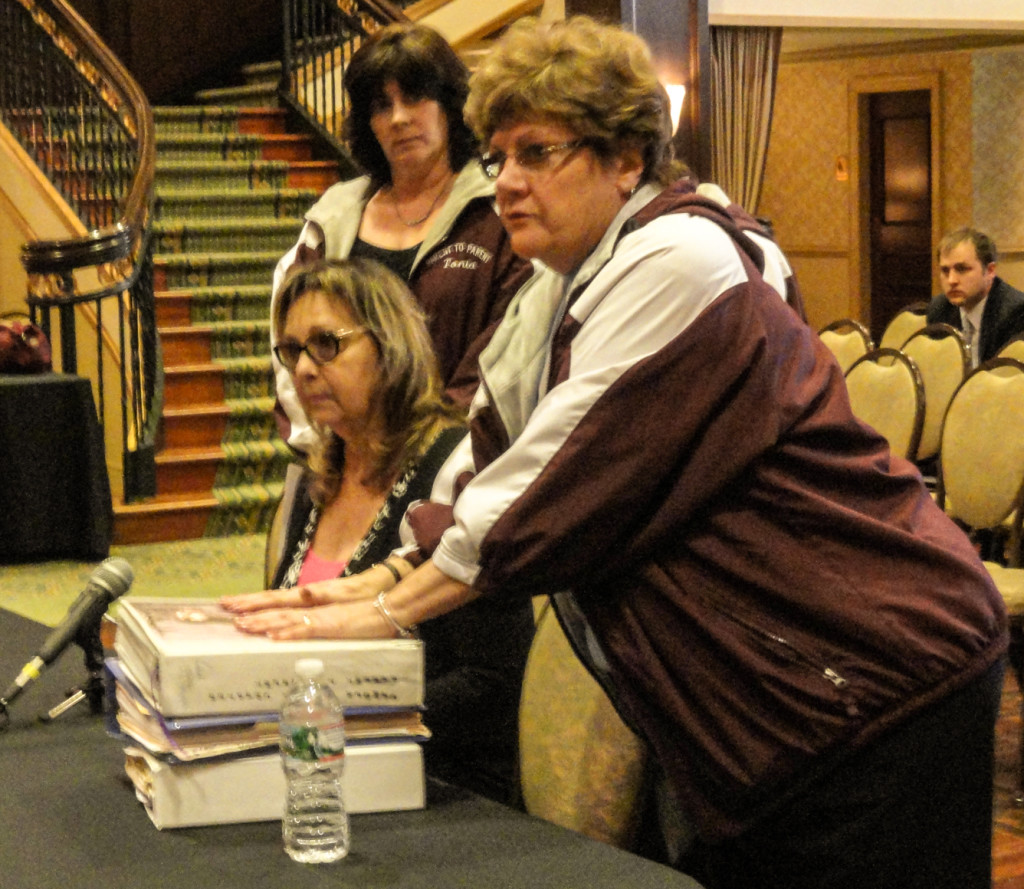 The panel also heard multiple discussions on the need for dollars to support drug and alcoholism treatment and recovery, from counselors to parents to executive leadership.

Alan Oberman, CEO of the John Brooks Recovery Center in Atlantic City, asked the assembly for a special, $6-million appropriation to keep the doors of his facility open. Oberman said that with the closure of multiple casinos in the city, from which Casino Redevelopment Authority operating revenues are principally sourced, the existence of his programs are threatened.

“My residential treatment center represents approximately 10 percent of the beds in New Jersey,” Oberman said. “If I don’t find the ability to build a treatment center, we will be closing this summer.”

Oberman said that his center has an option on five acres in Mays Landing, on which he has begun site planning. But without additional funds, New Jersey will lose one of its largest and oldest recovery facilities for addictions.

“The state is not well-equipped to handle what we’re facing right now,” Oberman said. “We have a long history of low reimbursement rates and no funds for capital equipment. Many times the clients are literally lining up on the street.”

“Treatment works but it can be incredibly difficult to access due to its many barriers,” Furlong said. “There is just a small window of opportunity when the addict is willing to be admitted.”

Leaders from the Parent to Parent Citizens Advisory Committee from the National Council on Alcoholism and Drug Dependence New Jersey presented three binders full of local obituaries from Camden, Gloucester, and Burlington Counties; deaths due to substance abuse. Three of them had lost children to the epidemic.

“Southern New Jersey clearly lacks the capacity to meet the demands for the overwhelming number of people who need treatment,” said Tonia Ahern of Parent to Parent, who criticized “this odd division” between the access to funding afforded to facilities in the northern and southern regions of the state.

“There is a constant push and pull between north, south, and central,” Schaer responded. “Our responsibility is to ensure that no other children are lost to overdose.”

After the meeting Schaer remarked that the panel “learned a lot” from the morning’s testimony. As to whether it will effect a shift in policy, he said, “we need to see what’s planned for the budget” to know whether the committee “will recommend a shift in priorities.”