The project will remediate an old municipal dump, connecting the Cramer Hill neighborhood to the Cooper and Delaware Rivers for the first time in 70 years. 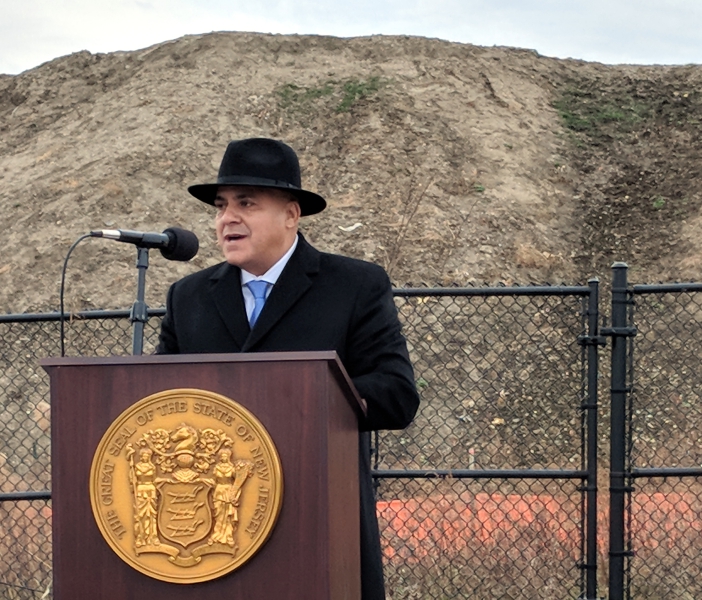 Camden Mayor-Elect Frank Moran grew up in the Cramer Hill neighborhood, two blocks away from the site of the Harrison Avenue landfill.

The city’s municipal dump was the closest thing to green space for kids in Cramer Hill, he said; a mountain of garbage that stood between them and the banks of the Delaware and Cooper Rivers.

When Moran and his friends wanted to go fishing, they had to forge trails with their bikes through the brush along the way.

“We made what we could of this circumstance growing up.”

But now, after a decade of multi-agency planning, and thanks to a $25-million allocation from the New Jersey Department of Environmental Protection (NJDEP), “the dumps” will be transformed into a 62-acre waterfront park in the next two years.

Outgoing NJDEP Commissioner Bob Martin said the project has been a priority for his eight-year tenure under Gov. Chris Christie, and that the agency “wanted to make sure that we finished this and we moved it forward” before he left office. 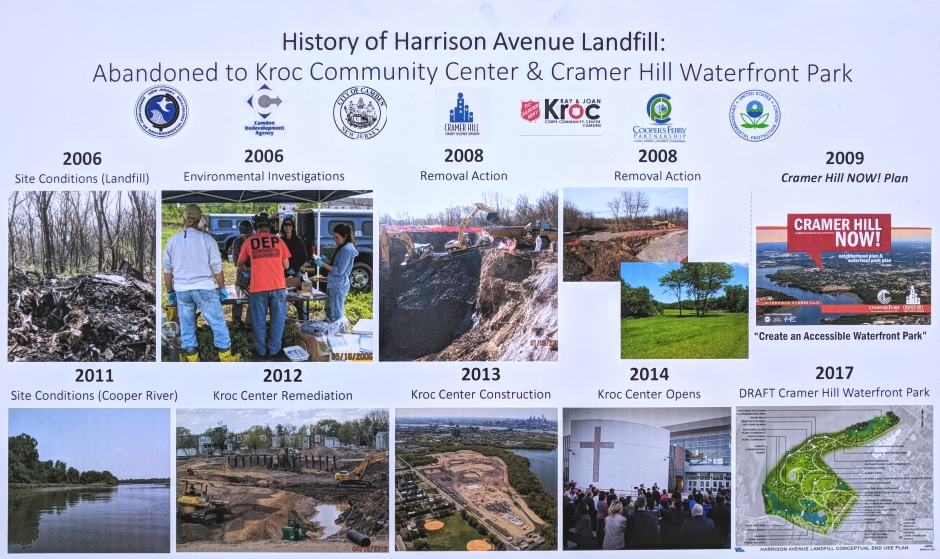 A history of the Harrison Avenue Landfill. Credit: Matt Skoufalos.

“We spent over $26 million of hazardous discharge site remediation money to help clean up the site you’re standing on as part of the Kroc Center,” Martin said Wednesday at a press conference announcing the project.

“Probably the most important thing to us is the emphasis of the quality of life; making sure there is a future for the children of these neighborhoods,” he said.

After the remediation is complete, the Cramer Hill waterfront park will feature one mile of stabilized shoreline along the banks of the Delaware and Cooper Rivers, freshwater tidal wetlands, a fish pond, and recreational trails throughout. 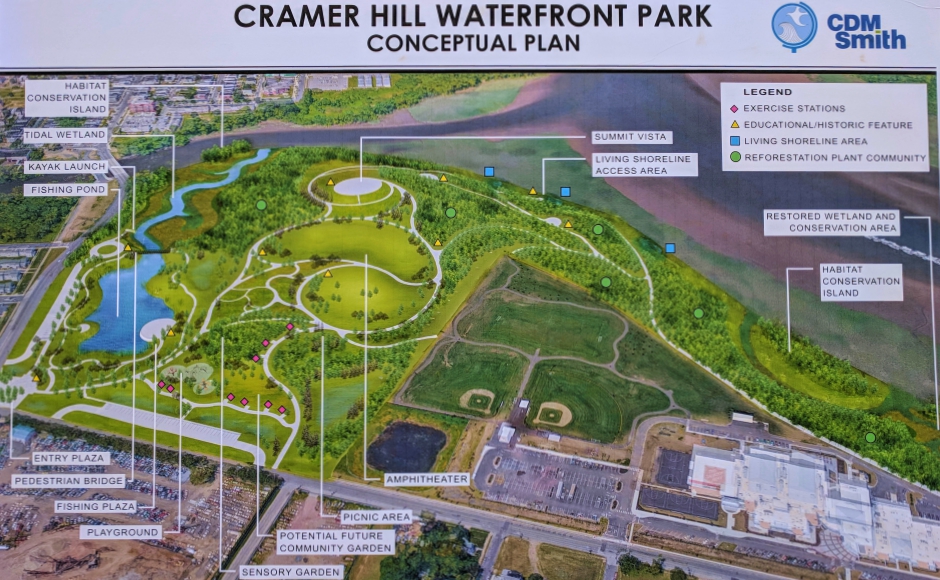 Most of all, it will give residents of the neighborhood access to the Camden waterfront for the first time in 70 years. Moran called it “an opportunity to enjoy the recreation that’s to come.

“This is going to give you a view of the Philadelphia skyline; all those benefits that really develop the soul of an individual,” he said.

Camden County Freeholder Carmen Rodriguez, who also grew up in Cramer Hill, said she hadn’t known the neighborhood had any body of water until she was in college.

“There was no waterfront,” Rodriguez said. “It didn’t exist. We have beautiful places [in Camden]  that we just cannot access.” 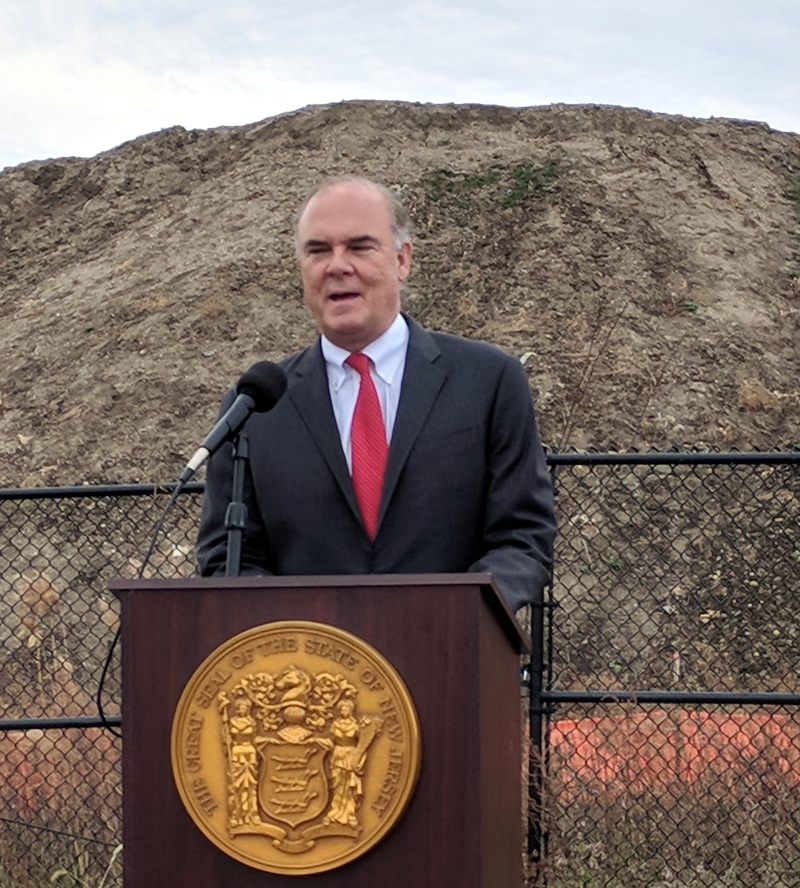 Rodriguez, a former science teacher who oversees bilingual education for the Camden School District and is the liaison to the county health department, drew a direct line between the city’s environmental issues and the instances of asthma among its children.

In converting brownfield sites to usable space, she said Camden is preserving its youngest citizens’ futures.

“We know that a healthy community requires those spaces in order to be healthy and well,” Rodriguez said.

“To have a better community, this is what we must invest in.”

Frank McLaughlin, Camden Lead for the NJDEP Community Collaborative Initiative, Office of Brownfield Reuse, said the landfill contains “everything people threw out from 1952 to 1971.”

Studies begun in 2006 revealed that the site was chemically “more like a compost heap,” he said, as most of the organic solids there had broken down.

Cleaning it up means digging up more than 300,000 cubic-yards of solid waste, which will be buffered with a two-foot cap of clean soil, and reburied. To put it into perspective, 221,000 cubic-yards of waste was excavated to build the Kroc Center, McLaughlin said.

“Eventually, we’re going to have a linear parks system” in Camden, he said, adding, “It’s not a problem of vision” but one of financial investment. 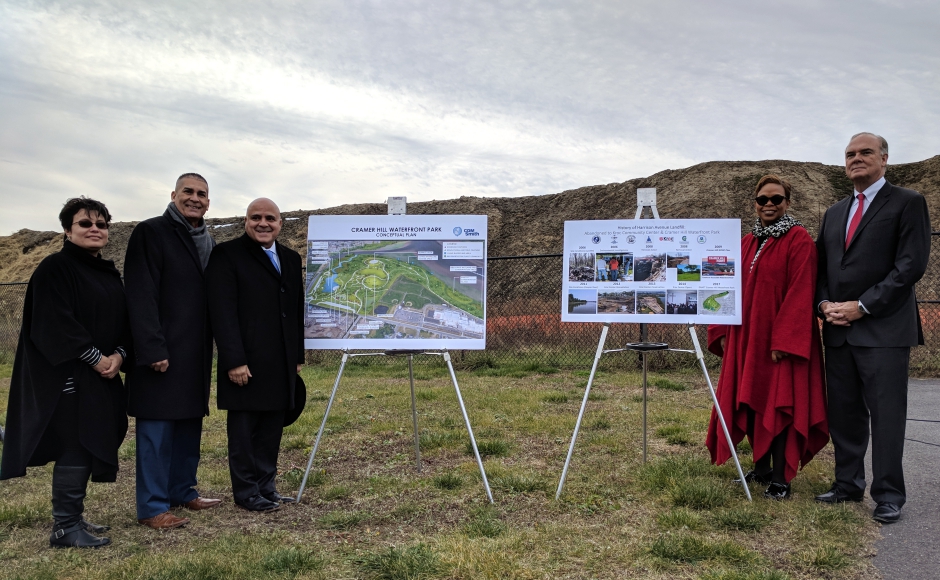 Elected officials celebrate the announcement of a $25-million plan to turn the Harrison Avenue landfill into a waterfront park for the Cramer Hill neighborhood. Credit: Matt Skoufalos.

“This is the largest contaminated site in the history of Camden, and it sits as a barrier between the Cramer Hill neighborhood and the beautiful Delaware River waterfront,” McLaughlin said.

“It’s an ecological treasure and an important revitalization project.”

Sarah Bryant, Director of Community Initiatives for Cooper’s Ferry Partnership, said converting the landfill into a park has long been a piece of the Cramer Hill Now! neighborhood redevelopment plan, and was appended to the city’s master plan.

Camden has moved on a number of parks-related projects, and more still are in the works. Last week, the city opened the final phase of Phoenix Park in South Camden; last year, it opened Cooper’s Poynt Park, and in the spring of 2018, will open the Cramer Hill Nature Preserve, a 35-acre urban forest on the border of Petty’s Island and Pennsauken Township.

McLoughlin said he’d next like to tackle the former Knox Gelatin site in North Camden; Bryant said Cooper’s Ferry is working on making the former Camden Laboratories building in Whitman Park into a recreational space. Her colleague, Caroline Gray, said that property is a popular spot for illegally dumping trash; to curb it, the agency launched CamdenReports.com, a website for residents to log dumping and flooding concerns.

Martin said the state began soliciting bids for the Cramer Hill cleanup this month. NJDEP hopes to award a contract for the project in early 2018, with work to begin in the spring.