The first New Flyer Xcelsior CHARGE NG comes online this June, as the state transportation agency begins a three-year pilot project en route to the planned electrification of its entire fleet by 2040. 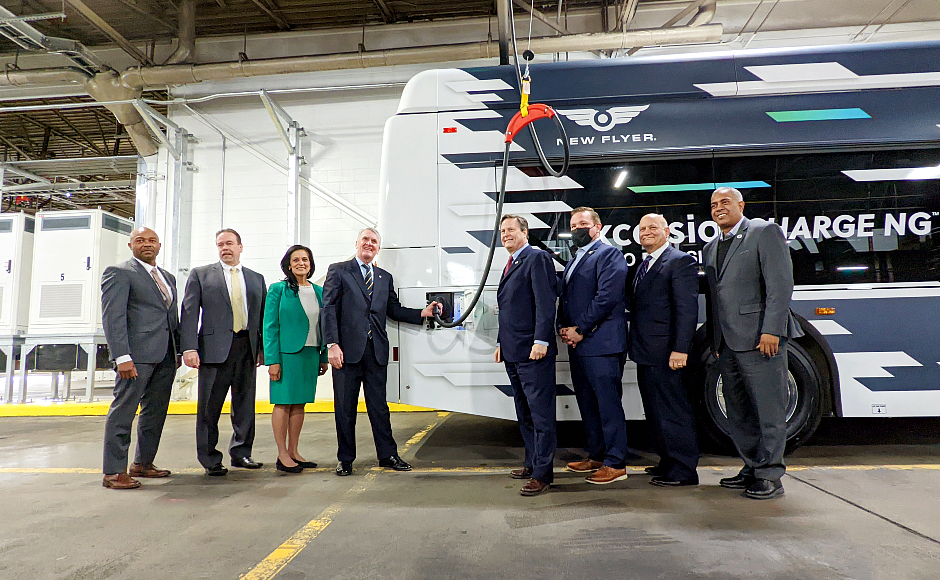 The first fully electric transit buses in New Jersey will enter service this summer in Camden City, as NJ Transit takes initial steps to converting its entire fleet to zero-emissions vehicles by 2040.

On Tuesday, leaders from the state transit agency, the Amalgamated Transit Union (ATU), and government officials previewed the bus and its charging infrastructure, which will hit the road in June as part of a three-year pilot study.

The CHARGE NG can carry 70 riders (38 seated and 32 standing), is wheelchair-accessible, and features 38 charging ports for passengers as well as an onboard infotainment system.

NJ Transit President and CEO Kevin Corbett said that Camden City and Newark were selected to pilot the electric bus programs based on longstanding environmental justice issues in both cities, as well as usage potential.

To date, NJ Transit has regained 50 percent of its pre-pandemic ridership statewide, a figure that Corbett said jumps to about 60 percent in the area of Camden City. “It’s a short enough route that it won’t get stranded, and can make repeated runs, and it starts close to the Newton Avenue garage [in Camden City],” Corbett said.

The electric bus can maintain eight hours of range and requires five to six hours to fully recharge.

Its range between charges varies based on several factors, including weather and roadway conditions, and driver ability, said Mike Kilcoyne, NJ Transit Senior Vice-President of Surface Transit and General Manager of Bus Operations.

“The steadier they drive it, the further they’ll go,” Kilcoyne said. “They’ll make shorter runs when it’s cold; the bus draws more power to heat, and heat escapes with doors opening and closing.”

Camden City also benefits from a level topography, which could extend the 250-mile, theoretical range of the bus on a single charge. Kilcoyne estimates it will travel 175 miles per day on routes that will be rotated to gather different data throughout the course of the three-year study. NJ Transit plans to roll out new electric buses throughout the state every couple of years until 2040, when its 2,500-vehicle fleet is slated to be fully electrified.

Its initial contract with New Flyer covers eight buses, with an option to purchase as many as 75 more.

Kilcoyne said the batteries on the electric buses have roughly a six-year lifespan.

Although there’s no combustion engine to maintain, each wheel is powered by its own electric motor, making the vehicle all-wheel-drive at startup.

New Jersey Assemblyman Bill Moen (D, NJ-05) described the bus electrification project as a “first-of-its-kind” pilot program that will influence the future build-out of zero-emissions mass transit in the region.

“This is going to create the waves that we need around the state and globally,” Moen said. “We’ll get a jump start on perfecting large-scale electric bus infrastructure.”

Camden County Commissioner Jeff Nash echoed Moen’s sentiments in emphasizing the need for New Jersey “to build out an electric infrastructure that will support a growing electric vehicle industry.” 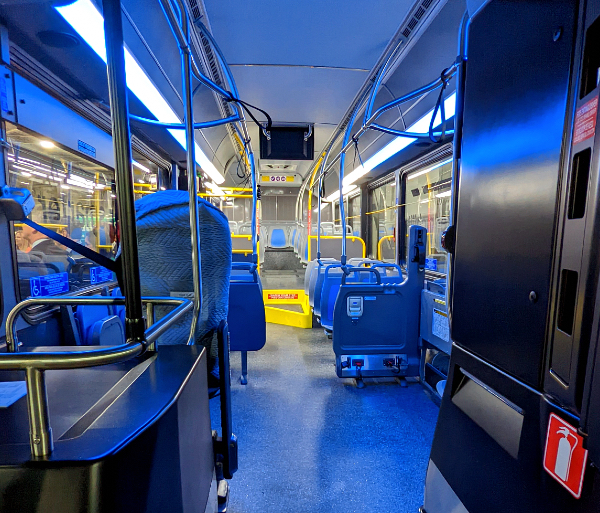 In his remarks, U.S. Congressman Donald Norcross (D, NJ-01) drew a direct line between American energy independence and global conflicts that have historically been associated with the economics of the fossil fuel industry.

“Imagine a world where we weren’t as dependent on oil and gas, given what’s going on,” Norcross said.

“The more we electrify saves the planet, it saves lives, and sets us away from some very bad players and their war machine.”

Orlando Riley, chairman of the ATU New Jersey State Joint Council, said electric buses could do a lot to improve conditions for workers who maintain the NJ Transit vehicle fleet.

“When I was a mechanic and we would run buses, the garages would fill up with smoke,” Riley said. “It’s incredible to think that they could work without breathing in toxic fumes.”

As he inspected the Xcelsior CHARGE NG, Pablo Gonzalez, President of ATU Local 820 of Union City, said that his drivers don’t know much about zero-emissions transit vehicles. Like other logistics professionals, they’re also in short supply, Gonzalez said.

Whether the novelty of operating an electric vehicle might inspire more would-be drivers to consider the profession, he did agree that the zero-emissions fleet would be welcome to professionals and commuters alike.

“At the Port Authority, there’s so many buses circulating that they’re always complaining about the smoke and fumes,” Gonzalez said.