The plan would increase earnings 75¢ this year, then another $1 annually through 2023, indexing annual increases to the rate of inflation. 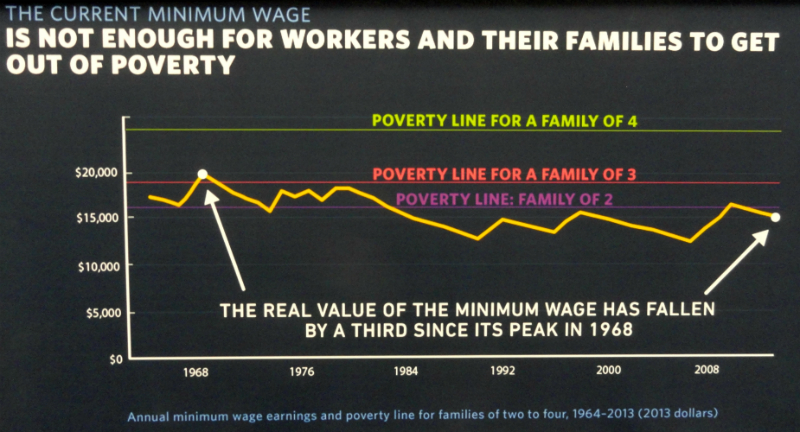 The minimum wage in New Jersey is $8.38 per hour; at the federal level, it’s more than a dollar less.

That translates to an annual salary of $17,430, or some $9,000 less annually than what could be considered a living wage for a childless adult.

It’s nowhere near enough to get by in a state with a cost of living more than 30 percent above the national average, and some of the highest rents in the country.

Some 973,000 New Jerseyans, or 11 percent of the most densely populated state in the union, live in poverty, U.S. Congressman Donald Norcross (D-NJ) said Thursday. Before an audience at Camden County College, Norcross spoke about the need to “level the playing field” for Americans who have been robbed of “the dignity of work” by jobs that do not pay a living wage.

“You can’t afford to get sick,” he said. “There are no holidays. There certainly isn’t a vacation. And you’re not thinking about how you’re investing in inversions to keep more money in your accounts.”

Flanked by long-time minimum-wage workers who all teared up or wept openly when discussing the humiliations of their financial circumstances, Norcross outlined a graduated plan to elevate the federal minimum wage to $15 an hour by 2023 and index cost-of-living increases to the rate of inflation thereafter. 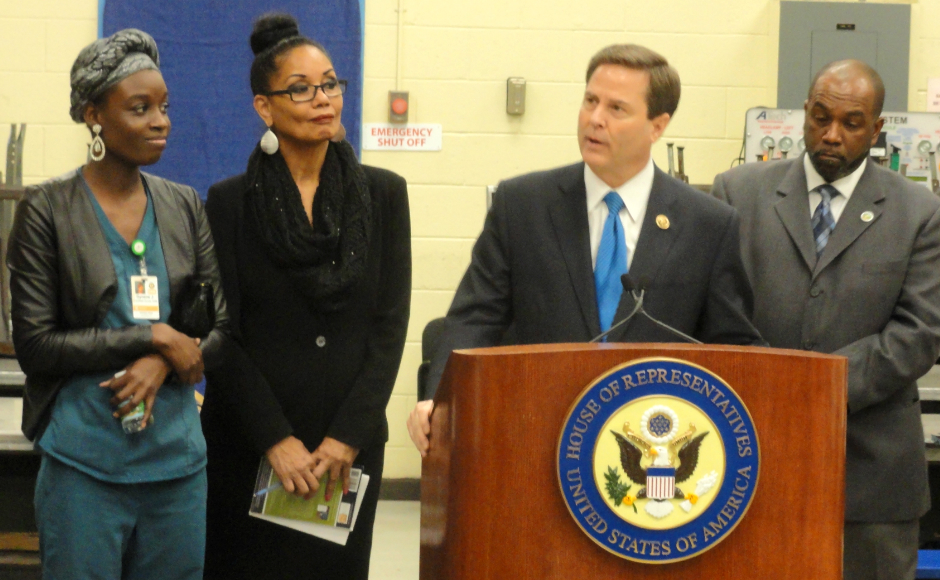 Dubbing it the “Fight for 15,” the congressman said that his bill would lift millions of Americans out of poverty, reduce government spending on social services, and incentivize small businesses who exceed the minimum-wage threshold with a tax credit of 50 cents on every dollar paid above the minimum wage.

The definition of “small business” is tied to the Affordable Care Act standard (fewer than 25 employees), he said.

“There’s enough money being made,” Norcross said. “There’s enough profit. It’s where it’s being shared. Obviously it’s doing very well for those at the top of the food chain; it’s those at the bottom who have been losing ground over the last 30 years.

“We have plenty of those tax breaks for those who are doing just fine,” he said. “This is about creating the dignity of work so that you can take care of your family.” 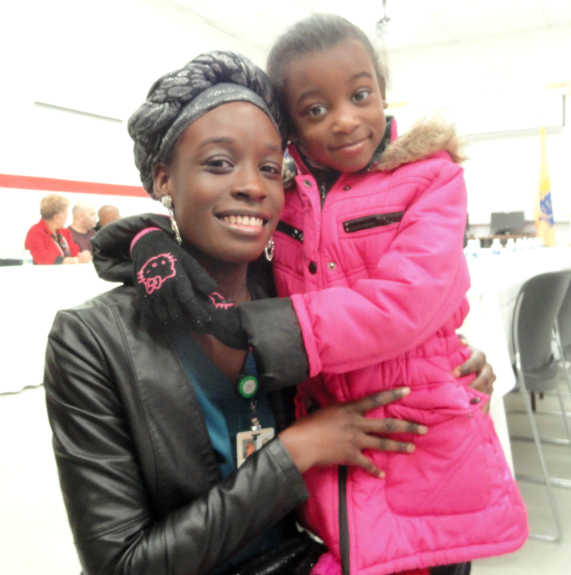 ‘I often find myself scraping by’

Gynene Jonas of Gloucester Township took the podium to describe how she left behind an $11-an-hour job because it didn’t afford her enough money to make ends meet.

Today, Jonas makes $12.64 an hour—a rate she said she owes to the strength of her union—but spends $1,200 of her $1,400 monthly take-home on recurring bills for herself and her 6-year-old daughter, Priscilla.

“Can you survive off of $200 a month with you and a child?” Jonas said. “I often find myself scraping by.”

A certified nurse assistant who works in a nursing home, Jonas said her work is demanding, and she often struggles to stifle the anxiety brought on by her finances so that she can care for her patients with a positive attitude.

“At the end of the day, I just want to be able to come home and take care of my family,” Jonas said. She fought back tears as she described foregoing a winter coat so that she could afford one for her daughter. 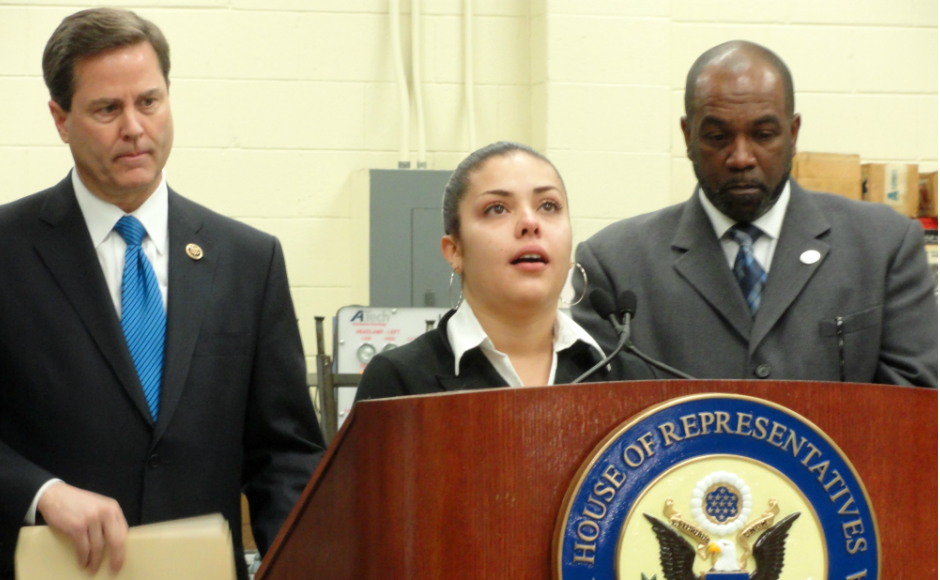 “There’s something fundamentally wrong in America if we have to make that choice,” Norcross said after Jonas concluded.

“Henry Ford understood that if you don’t pay your employees enough, they can’t buy your products,” he said.

Princess Marrero of Camden described the stress of raising her five children in a homeless shelter because they can’t afford rent on her salary.

Her voice faltered as she told a story about her 7-year-old son offering to sell some of his toys “to take care of Mommy,” or how depressed she felt telling him she didn’t have a spare dollar to buy him a soft pretzel.

“I want to live a life, not a struggling life,” she said. “I’m tired of it. I just want a better life for my kids.” 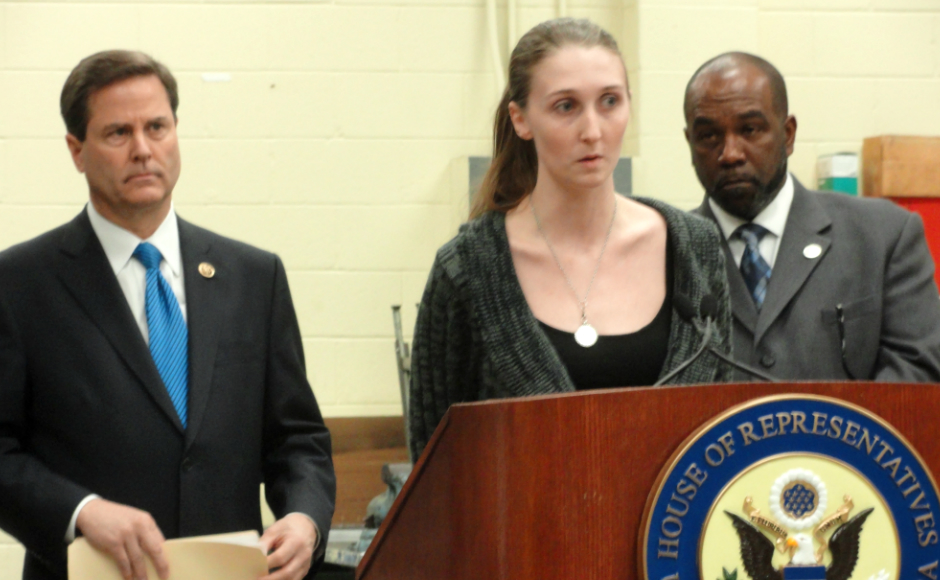 Katherine Underwood of Brooklawn has worked in retail for nearly a decade, but even after having risen to the rank of assistant manager, still only makes $1.30 more per hour than the cashiers hired for seasonal help at her workplace. Her husband was diagnosed with cancer, and gave up his job to stay at home with their child while he recovers.

“He’s in remission, but I can’t pay the bills,” she said.

Durane Talley of Camden, whose daughter was just born in October, said even finding a job is an obstacle, to say nothing of navigating the support systems that are in place to assist him.

“A guy of my stature, looking the way I look, I get turned down a lot,” Talley said. “I’m scrambling. I don’t know what to do. They might not call me back.

“It’s hard to be a man in this society,” Talley said. 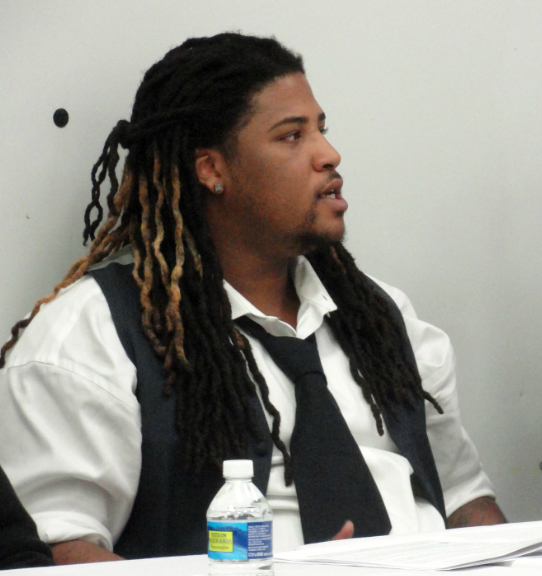 ‘You can’t pay your bills with eight bucks an hour’

“When I first got into the working world, you thought of going to work in a retail space, going to work at a restaurant, as just a starter job,” said Camden County Freeholder Jonathan Young.

“Fast-forward to 2008, all these people are out of work, and your minimum-wage job becomes your primary income.”

Sixty percent of jobs lost in the recession were middle-income jobs, Young said; 59 percent of the jobs that have replaced them are minimum-wage jobs.

Young said he didn’t believe pass-through costs from minimum-wage employers would substantially eat into their profits “if they have to charge a quarter more on a Big Mac or an extra nickel for a small fry.

“You’re sharing the responsibility, and you’re creating a more stable economy,” he said. “The more money a person makes, the more they’re willing to go out; the less they’re willing to be on government assistance. You delete a whole lot of problems.” 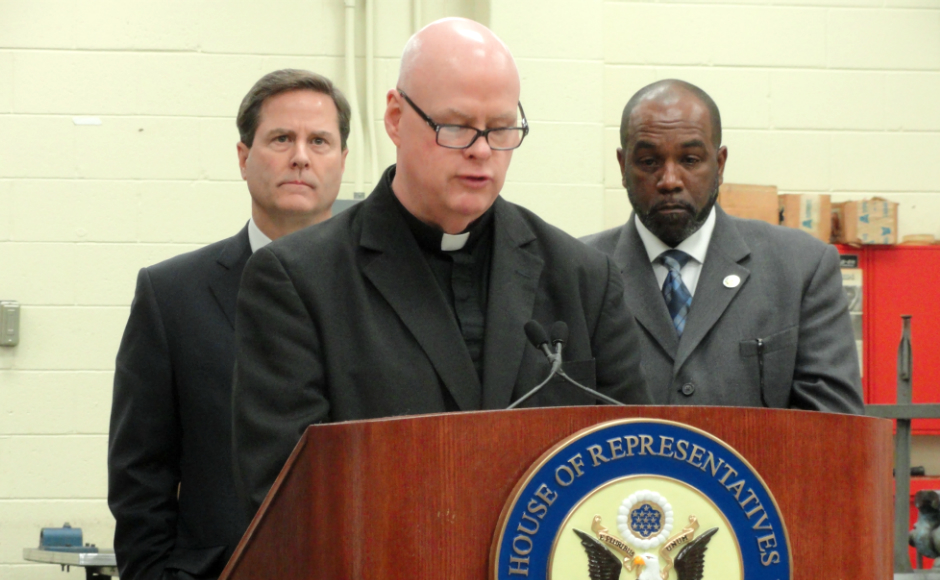 “To refuse or withhold it can be a grave injustice,” Hughes said.

“There is no greater benefit that we can provide to the workforce than a healthy living wage,” he said. “Wage increases significantly improve the viability of families and their ability to offer a nurturing environment to their children. To prevent such opportunities is a sin before both God and humankind.”

Hughes cited the perspective of Pope Francis that “labor is ‘not a mere commodity,’ but through its use provides ‘its own inherent dignity and worth.’”

Gloucester County NAACP President Loretta Winters echoed those sentiments in describing a higher minimum wage as being necessary to close “the opportunity gap.

“We are the greatest country in the world, and the barometer by which we judge that is how we treat the poor,” Winters said. “Whether you’re poor, middle-class or rich, everyone will benefit from this.”