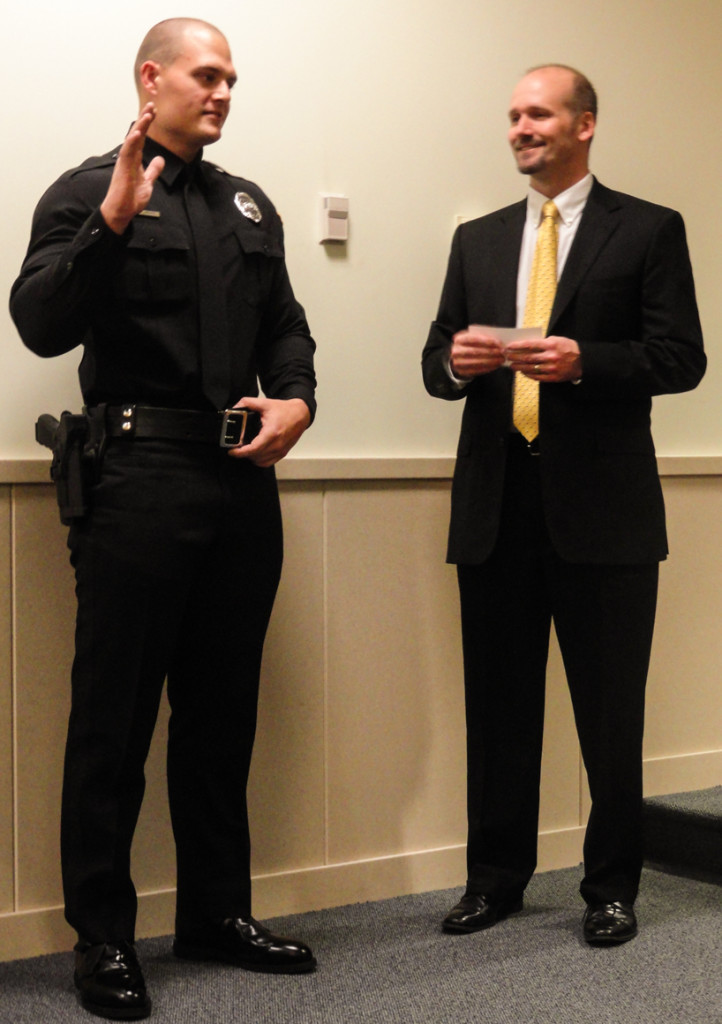 Police activity was the running theme of the inaugural meeting of the 2015 Oaklyn municipal government.

Freshly sworn-in Council Members Dorothy Valianti and Charles Lehman cast some of their earliest votes of the year in the unanimous appointment of Patrolman Anthony Abbate, who took his oath of office as a full-time borough policeman Monday.

Abbate, who has worked part-time with the department for a year, is the son of retired Oaklyn Police Chief Joseph Abbate’s cousin.

“[He] will be an asset to the department,” the retired chief told NJ Pen. “Great guy.”

Anthony Abbate also shared the spotlight with Patrolman Matt Olivieri, whose new K-9, Enzo, was introduced to the public at the meeting.

Even James Rafferty, elected Council President that evening, took the occasion to demonstrate his support for the Oaklyn police department, which was out in numbers to support the expansion of its ranks.

“I truly want to thank the police,” Rafferty said. “I want them to know, and I think I can speak for everyone, that we as a community, we as a council, will do everything in our power, legally, to protect them.

“It bothers me what happened to those two New York police,” Rafferty said, alluding to the murders of slain NYPD officers Rafael Ramos and Wenjian Liu, whose deaths have become a national storyline. 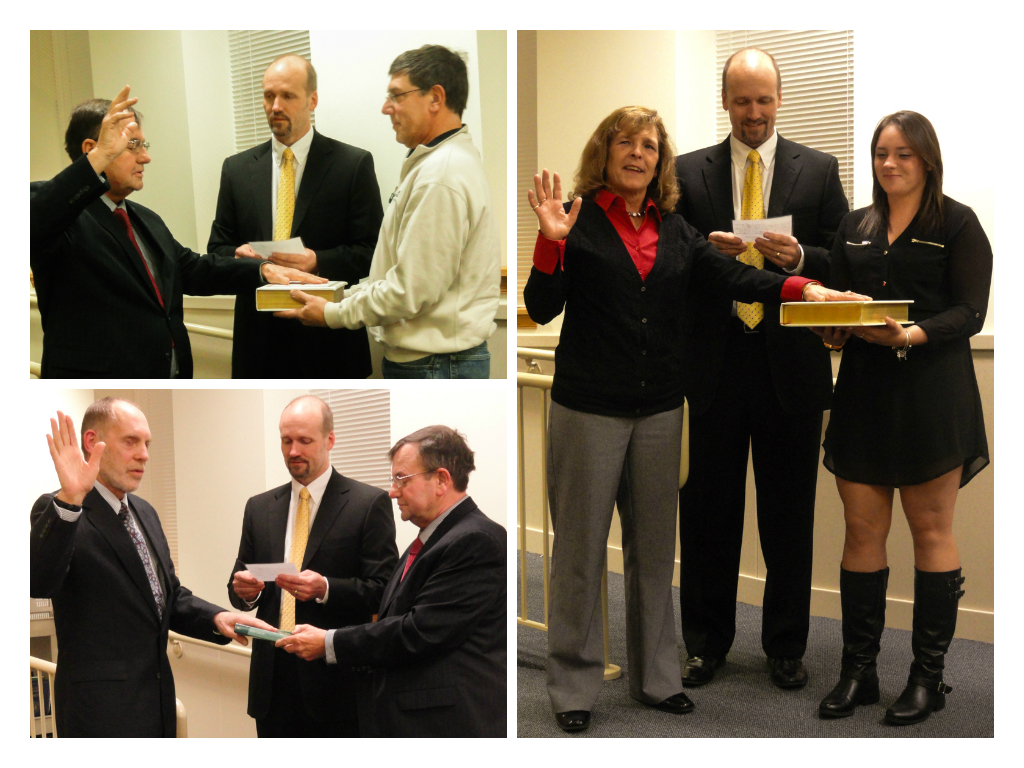 “I think they know but I want to say it publicly: that we are 100 percent behind our police department,” Rafferty said.

“I feel safe every day out there,” he said. “[Oaklyn Police] make the community not only safe, but they’re concerned with how it looks, how it’s presented.”

Oaklyn Police Chief Mark Moore said that the addition of Abbate and the new police dog will mean a lot to a small department that “had been greatly reduced” in the past five years.

“We’re getting great support with the mayor and council,” the chief said. “It’s really needed to up our staff.”

In small, tight-knit towns like Oaklyn, law enforcement often has a close relationship with the community it polices.

A testament to the strength of those bonds can be found in the example of K-9 Enzo, whose very presence on the force is owed largely to contributions from local businesses and residents.

The 18-month-old German Shepherd represents the revival of an Oaklyn police dog program that had been dormant since the retirement of K-9 Bruno, who “just passed away January 1” at the age of 14, Forbes noted at the meeting.

In budget-strapped times, town council okayed the move with the understanding that the police department would raise the funds to pay for the dog, his gear, and the refitting of a vehicle to transport the K-9.

Even with several thousand dollars of donations, ongoing costs mean the project is still in need of financial support.

“We hit enough to get the dog and to get the program started and get the car outfitted, but money’s always an issue,” Olivieri said; “maintenance on the vehicle, food and vet bills with him. We’re working on getting a [Kevlar] vest donated.”

Olivieri’s commitment to the program isn’t just financial, either. After 14 years on the force, he said the 16 weeks of K-9 handler classes was “the hardest thing I’ve ever done.”

Police dogs typically live with their handlers, so even after those long classes are over, Olivieri’s job of socializing Enzo with his family and dog continues. 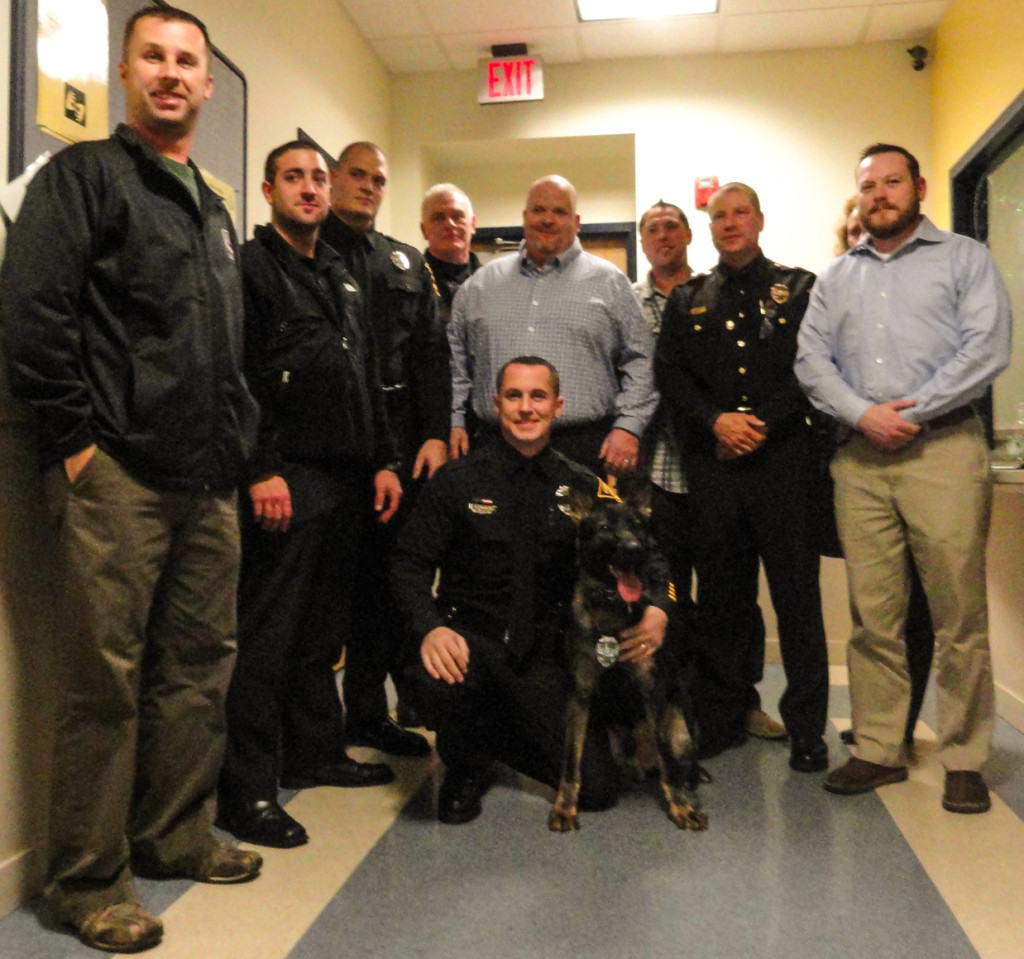 The two also will train monthly to reinforce Enzo’s mastery of commands in criminal apprehension, agility, tracking, and article searches.

Initially, Enzo will accompany Olivieri on routine patrols; the two will also be available for specialized deployments.

“I’m a car guy,” Olivieri said. “Shelby’s my number one, but I couldn’t name a male police dog ‘Shelby.’”

*CORRECTION: An earlier draft of this story mistakenly identified Anthony Abbate as the nephew of Ret. Chief Joseph Abbate.