Day laborer Jose Ortega, 38, was killed immediately, prosecutors say, in what was most likely an accident. OSHA is investigating Mancuso Contractors and Carl Pursell, Inc.

Prosecutors said in a statement that Ortega “was killed immediately in the collapse” of building debris at the site of a Blockbuster Video demolition site. Preliminary indications are that Ortega perished in an accident, authorities said, but noted that the investigation is ongoing.

The victim in a Cherry Hill building collapse Friday was a day laborer who had been employed just two weeks by a contractor with a history of safety violations, according to the federal Occupational Safety and Health Administration (OSHA). 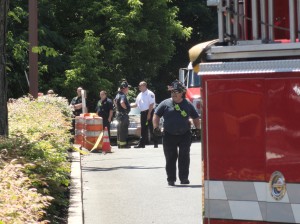 A rescue operation became a removal operation Friday afternoon as emergency crews from Cherry Hill and Camden City responded to the scene of a fatal construction accident. Credit: Matt Skoufalos.

According to a spokesperson for the agency, OSHA is investigating Mancuso Contractors, of Maple Shade, NJ, which employed the worker killed in the demolition of a Route 38 Blockbuster Video, and Carl R. Pursell, Inc., of Berlin, NJ, the contractor of record on the $29,200 demolition job.

Both businesses have a history with OSHA. Both are non-union shops.

Mancuso was  fined more than $5,000 for five separate counts of safety violations in 1999 and 2000, according to OSHA documents.

OSHA has cited Pursell in 12 separate safety incidents since 2007 and has levied more than $27,500 in initial fines.

Neither company could be reached for comment on Friday. 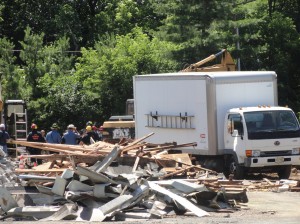 The scene of a building collapse at a Cherry Hill construction site Friday. Credit: Matt Skoufalos.

Cherry Hill Fire Director Patrick Kelly said that falling debris struck and then buried a worker at the site of a former Blockbuster Video store that was being cleared to make way for a Super Wawa on Route 38.

Technical rescue units from the Camden and Cherry Hill Fire Departments responded to the scene at 12:34 p.m. Friday, Kelly said.

Although crews arrived within four minutes of receiving the 9-1-1 call, they soon realized they were  dealing with a recovery, and not a rescue situation, he said.

A backhoe operator who was also on the scene was transported to a nearby hospital with complaints of chest pains.

No cause of death has been determined in the incident.

Investigators from the Camden County Prosecutor’s Office are joining OSHA in the investigation. Neither of the victim’s names have been released pending notification of their families.