The three-year project will be ready to make its public debut Saturday morning. 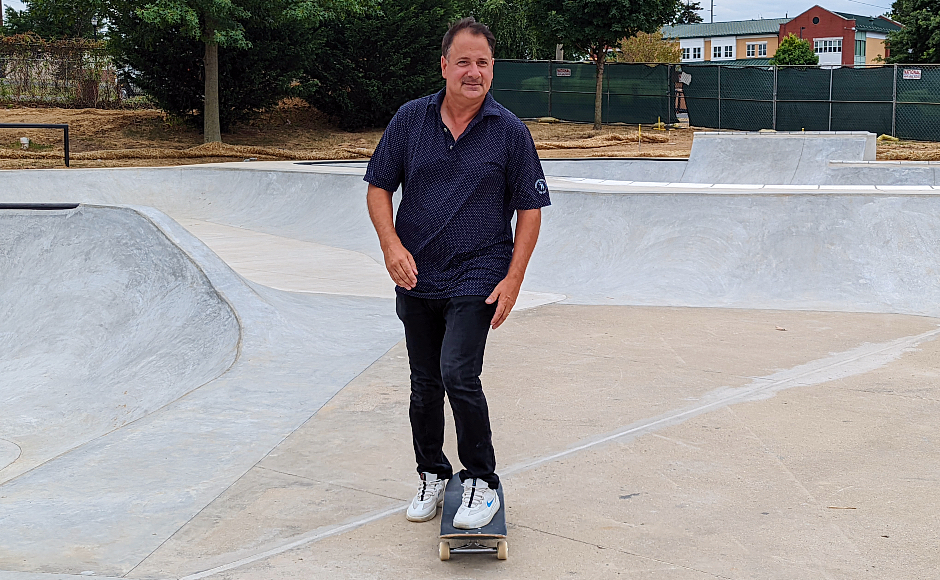 Even at 46, Marco DiBattista doesn’t look out of place on a skateboard.

The Pennsauken Committeeman grew up skating in Philadelphia’s Love Park long enough ago to be affected by the city forcing its skaters into what became the concrete playground beneath the I-95 overpass in FDR Park.

But on an overcast Tuesday in July, he beamed like a teenager again, gliding nimbly around turns and up sidewalls at the soon-to-be-opened, newly refurbished Pennsauken Skate Park.

On Saturday, the township will cut the ribbon on a three-year, $640,000 renovation project that has seen its prior skate park, a small, street-style installation with elements geared towards novice skaters, expanded into a fully concrete course with transitions, skateable objects, ramps, and bowls.

DiBattista, who spearheaded the project, said it was one of his first initiatives as liaison to the township parks department after joining the municipal government in 2019. An unofficial survey of which township amenities received the most use revealed that the township skate park was quietly packing in crowds.

“As a lifelong resident, I knew we already had this park that was here,” DiBattista said. “As a skateboarder, I knew the park wasn’t a super-desirable type of design, but it served a really good purpose.” 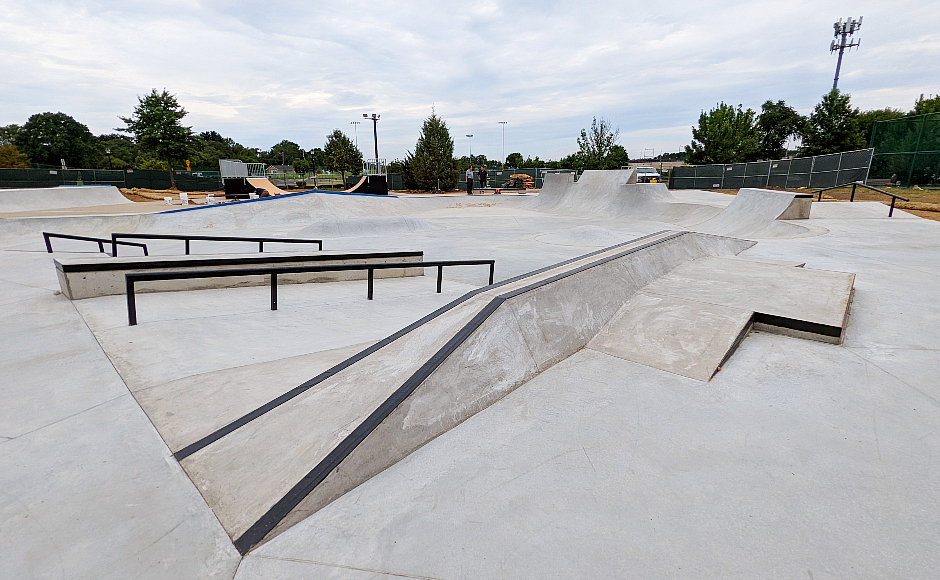 DiBattista made the case to his colleagues on the township government that refinishing and upgrading the park could elevate an amenity that already distinguishes the community from its neighbors.

It took three years to find the funds, bid the work, and complete the project.

Skate parks are hard to come by in South Jersey: Cherry Hill briefly had an indoor park that was nationally renowned in the 1980s, and Maple Shade currently boasts a small park with a vertical bowl.

Until Camden County pushes ahead with its plans for a park as part of its broader parks initiative, Pennsauken’s will be the go-to destination for many skaters outside of Philadelphia.

The township put the project out to bid, which was won by American Ramp Company of Joplin, Missouri, the contractor that had laid out the original skate park design. Its crew comprises skaters who’ve been on the job for 20 years or more, like foreman Matt Gadsby and workers Geoffrey Hall, Tony Miorana, and Clay Shank. 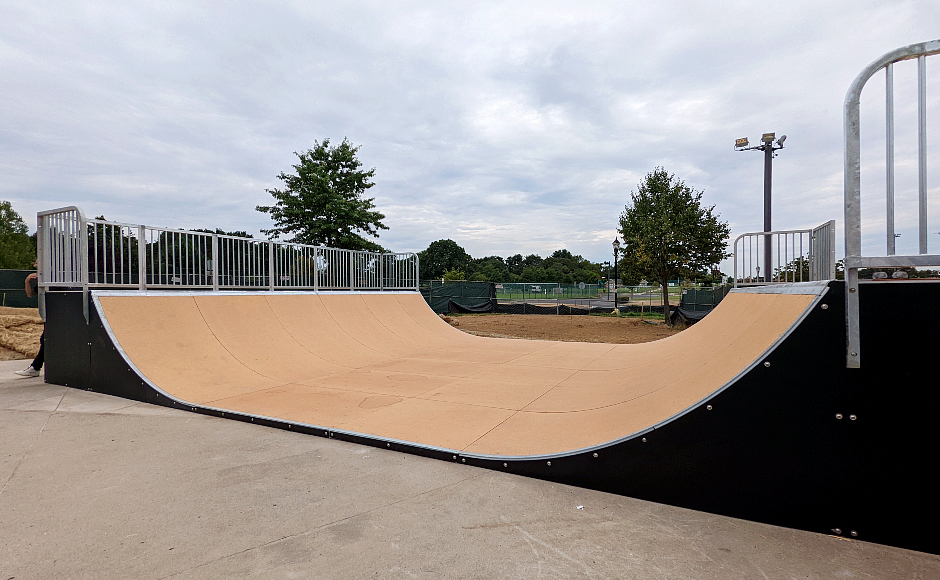 Although the park won’t officially open until Saturday morning, DiBattista said skaters from as far as an hour away have been anxiously monitoring its progress, with some even hopping the fence to get an unsanctioned preview.

“We understand that when you build something like this for your community, it’s a giveback,” he said.

“It gives kids who don’t play soccer, football, basketball, a place to express themselves. It’s a meeting place.

“I love all sports, but there’s a different type of blood in your body when you’re [skating],” DiBattista said. “You’re happy when somebody does a good trick. You’re not competing. It’s a great life lesson. There’s something unique about that.

“Skateboarding has no boundaries – race, sex, religious belief — none of that stuff exists here,” he said. “It’s a true gathering of people who have that mindset.”

DiBattista said that Pennsauken will work to establish a trust to fund future repairs to the park as well as partnerships with the Pennsauken Alliance on Substance Abuse (PASA), and other activities to help support programming at the space. 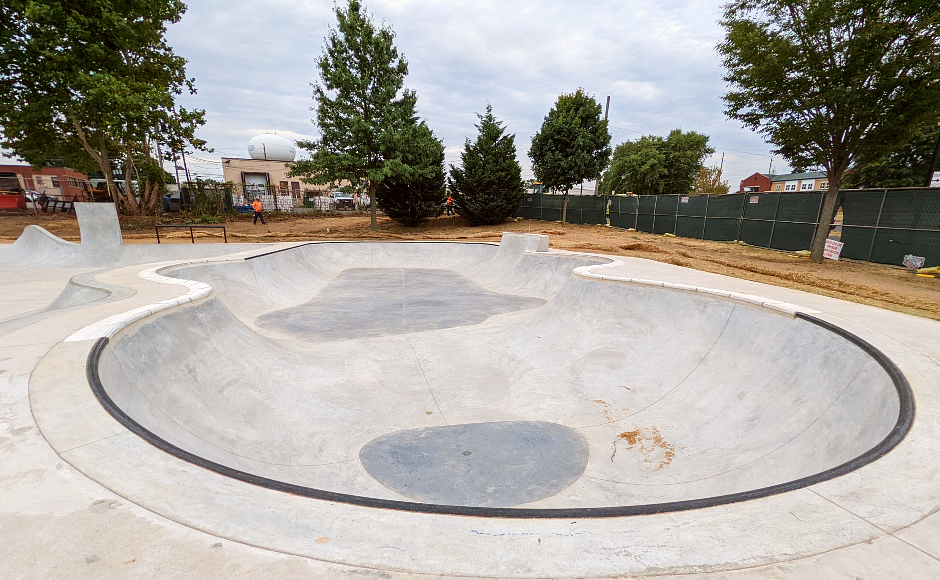 The bowl at the Pennsauken Skate Park transitions from four to six feet in depth and boasts pool coping as well. Credit: Matt Skoufalos.

The skate park renovations are of a piece with upgrades to other amenities throughout the township, including the 49th Street park, Tipton’s Pond, pickleball courts, and the soccer complex.

“Eventually we’ll have some walking pathways; we’re talking about adding another basketball court.

“These are assets to our community,” he said.

Pennsauken Mayor Jessica Rafeh said the Township Committee “has been behind this project 110 percent.”

She praised DiBattista for his vision in taking the park “to a whole new level,” sentiments echoed by Deputy Mayor Nicole Roberts.

“I could not be more thrilled about this skate park,” Roberts said. “Marco’s excitement about this project is certainly contagious. I’m thrilled for all of the kids that will be able to come here and enjoy it.”

Committeemen Vince Martinez and Patrick Olivo said the park reflects how Pennsauken has prioritized investment in its outdoor spaces and community activities. 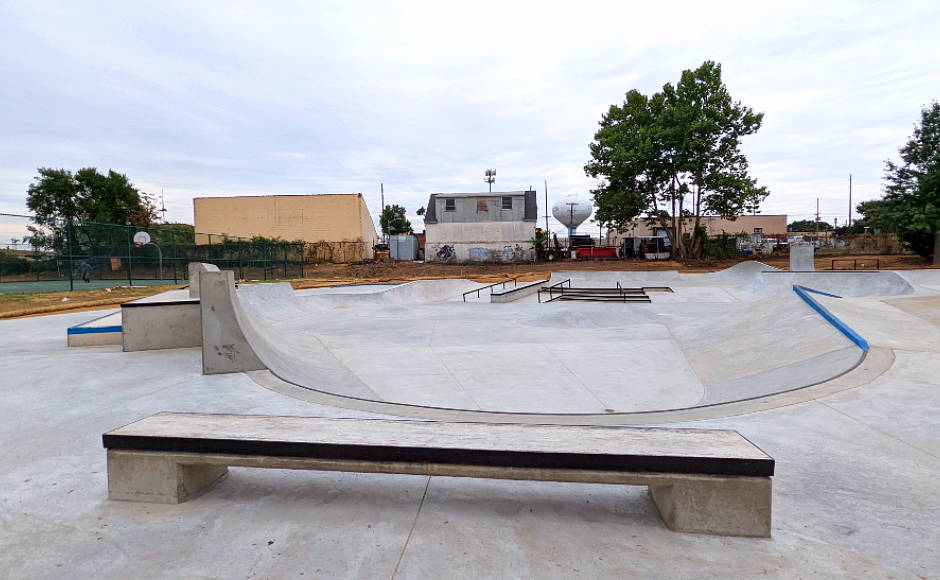 The Pennsauken Skate Park as seen from the park entrance. Credit: Matt Skoufalos.

“This is something special,” Martinez said.

“This skate park shows we’re committed to providing unique experiences for our residents and visitors to Pennsauken.”

“I think the skate park is a great addition to the Pennsauken Community Recreation Complex,” Olivo said. “It’s great for our youth.”

“We want to set the bar as high as we can go,” DiBattista said.

“We don’t want to compare ourselves to anybody else; we just want to put ourselves as high as we can,” he said. “It will be, piece by piece, a way to grow this town for our residents.”

The Pennsauken Skate Park is located at 1606 Bethel Avenue in Pennsauken. Its grand opening is slated for 11 a.m. Saturday, July 30, with a cook-out, music, and giveaways. For more information, follow the park on Instagram.