The project was approved by a vote of 9 to 5 with one abstention. Opponents said the decision betrays the purpose of the commission; supporters said it will bring local jobs and energy resiliency. 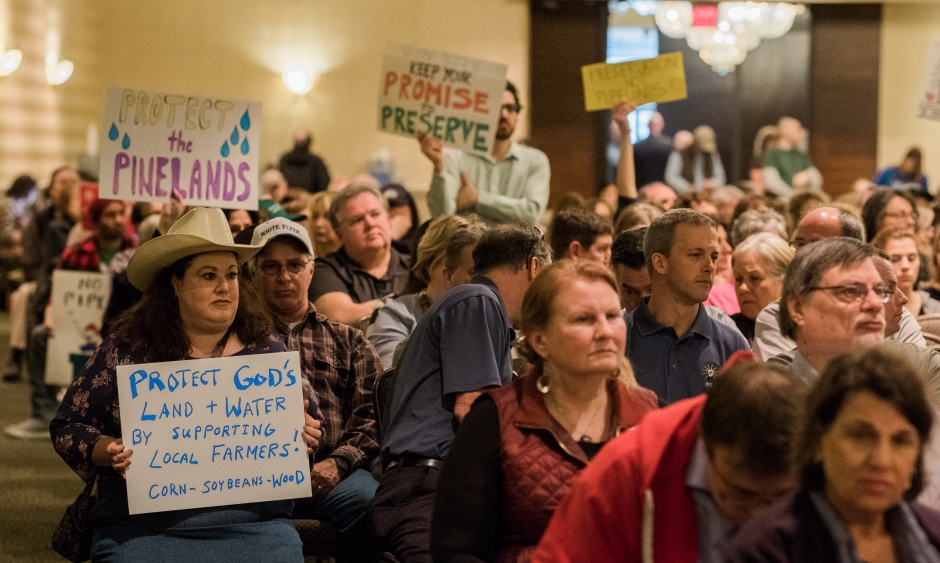 Taken inside a packed ballroom at the Crowne Point Plaza hotel in Cherry Hill, the vote passed 9-5 with one abstention over the vocal objections of a roomful of protestors who shouted over the proceedings and sang “This Land is Your Land” over the eventual vote.

At the top of the meeting, Commissioner Mark Lohbauer attempted to table the vote, arguing that public comment had been stifled at earlier meetings, that the project contained “contradictions in material facts,” and that commissioners needed more time to consider the issue.

His motion foundered for a second in dead silence until Commissioner Candace Ashmun, who was remotely teleconferenced into the meeting, offered one up. That motion failed 9-6, foreshadowing the eventual lines along which the project approval vote would similarly fall.

As it did, protestors turned to lyrics from the Broadway musical, Hamilton, hitting the refrain, “History has its eyes on you,” while the room chanted, “Do the right thing,” bringing the meeting to a standstill for five solid minutes. Commissioners on the dais checked their phones and sat back, waiting for them to run out of steam, and New Jersey state troopers at the front of the room buffered a media horde that jockeyed and braced to get a better shot of the action.

“This is what democracy looks like,” the chants continued.

Pipeline protesters turn to #Hamilton after a vote to table the pipeline vote falls short, 9-6

Finally, Lohbauer leaned into the microphone, pleading with the public to be allowed to continue the meeting. They quieted only when he asked to read a statement from Ashmun that charged the commission “to show the state, country, and the world, that we are up to the task” established by the commission’s comprehensive management plan (CMP) enacted 30 years ago.

“Setting a precedent to allow this line to cross the forest area will forever haunt future commissioners,” Lohbauer read.

Arguing that the vote should be allowed to carry forward, Commissioner Alan Avery said that the commission has “literally done almost nothing else” for the past five years.

“I think the information that’s been provided to us in some instances is beyond the scope of what the court remanded us to do,” Avery said. “It was a very narrow issue with regard to process and consistency with the Pinelands CMP. We were asked to look at the source of gas or the size of the pipes, I think they’ve been asked and answered by BPU. I would like to resolve this today.”

“If I had to listen to public comment, we figure it would be about 30 hours,” Galletta said. “I’ve been listening to this since 2012. I have personally enough information to make my decision.”

As the body announced it was moving to discussion on the project, the crowd again reared up with a resounding, “no.”

In the discussion that followed, Lohbauer led a vigorous opposition to the project, reading letters from former commissioner Fran Witt, and cautioning his fellow board members that approving the project establishes a precedent that can expand future development.

“Commissioner Witt pointed out to us, and he was right when he said this, that the CMP is not anti-development,” Lohbauer said. “It does not exist to block all development, but rather to make sure that development happens where it should happen and doesn’t where it should not.

“The forest is not just trees,” he continued, reading from a letter from Witt. “It’s a conglomeration of trees, plants, soils, and habitat. It’s a filtration system that cleans and preserves the groundwater that is beneath the trees, beneath the roadway. It’s all precious and it’s all protected. It tells us that such development must primarily serve only the needs of the pinelands.”

Lohbauer argued that the project does not primarily serve the needs of the pinelands, but rather would be used as “a throughway” from Philadelphia-area energy companies to the New Jersey coast, “and in the process, denigrate the forest.” Instead, he said, local residents will bear the risks of the environmental impact of the project, as will the preserved wilderness itself, while its chief economic value will go to a multistate corporation with customers throughout the energy grid. 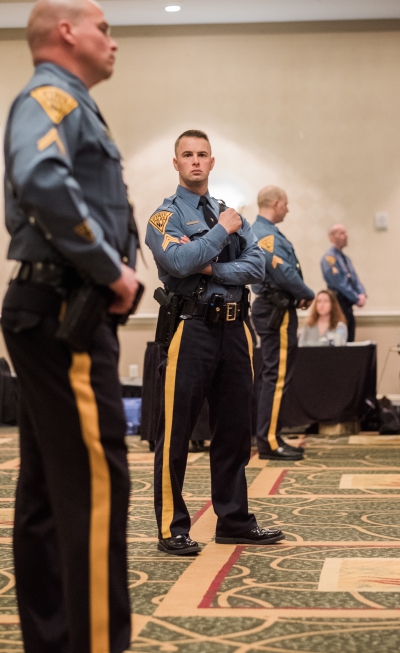 “This is exactly the lateral development that people who authored the CMP warned us against,” Lohbauer said.

“We will be setting a very low bar that any utility will be able to point to and get approval of lateral development through the pinelands.”

Lohbauer said 60 percent of the costs of the project would be paid by BL England customers who buy energy from New Jersey Natural Gas, of which he said 142,000 live in Cape May and Atlantic Counties and only 20,000 in the Pinelands.

At 380 billion-cubic-feet per day, he added that the volume of gas the pipeline is designed to handle is four to five times the amount needed to fuel Beesley’s Point.

“The facts in the record show us that this pipeline does not primarily serve the needs of the pinelands,” Lohbauer said, continuing to read from Witt’s letter.

“Who bears the risk of harm from installation disturbances, spills of benzanite slurry, spills of contaminated test water? Removal of a 10-mile-long swath, 24 inches in diameter, of forest-area soil? Possible puncturing of clay layers that will end up draining wetland habitat? Leaks of methane gas immersed in the aquifer. Who would bear the risk of detriment? Exclusively the pinelands; primarily the forest area.”

Lohbauer also pointed out that the agreement does not stipulate that the work necessary to execute the project—horizontal drilling, pipe suppliers, and contractors—need be sourced locally.

“They are not required to do this,” he said.

Anticipating the foregone conclusion of the final vote, which mirrored the response to Lohbauer’s motion to table, the crowd drowned out the final tally approving the project with a chorus of “This Land is Your Land,” before most filed out. 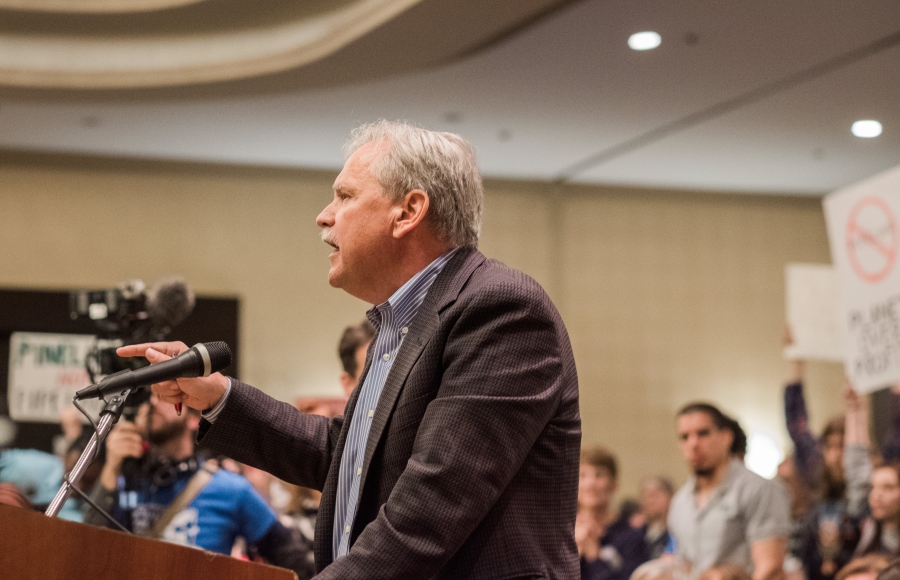 The first commenter out of the gate, environmental watchdog Bill Wolfe of Bordentown, blasted the commission for shifting the public comment portion of the meeting to after the vote.

He said the issue would now become one for the courts and the 2018 gubernatorial campaign.

“You violated your trust,” Tittel said. “Your legacy is disgraceful. We’re going to take you to court and beat you again.”

Not all in attendance were opposed to the project. A contingent of energy workers shouted their support of the project, including Kenny Colon of Millville, an operator at Beesley’s Point. A Cumberland County resident, he drives through the Pinelands on his daily commute to work, and said he hopes the project will create local energy resiliency.

“I do see both sides,” Colon said. “We support reliability.” 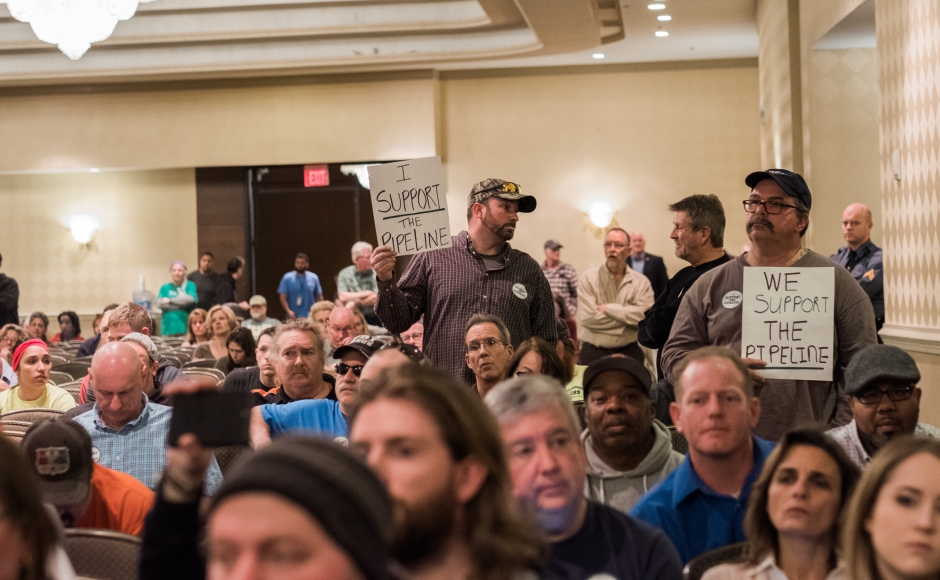 With the planned shutdown of the Oyster Creek power plant in 2019, Colon said the closure of Beesley’s Point would rob area residents of needed energy generation.

“A major storm takes out transmission lines, you have no electricity, no wood stove, you could freeze to death,” he said.

Colon said that if Beesley’s Point is converted to use natural gas, it would shed its reputation as one of the dirtiest coal-burning plants in the state.

Then there’s the economic considerations, the implications of which he said would be far more immediate locally.

“Say they close the plant,” Colon said. “That money goes away. I talked to my wife. We’d have to move.”

Lena Smith, regional organizer for Food and Water Watch, called the question a historic one that she said was tainted by political interference statewide.

“This is really a plan from powerful people in New Jersey to make us continue our dependence on fossil fuel,” Smith said. “Governor Christie’s office has interfered, as has the BPU [Board of Public Utilities]. We see [New Jersey State] Senator [Stephen] Sweeney pushing this on from behind the scenes.” 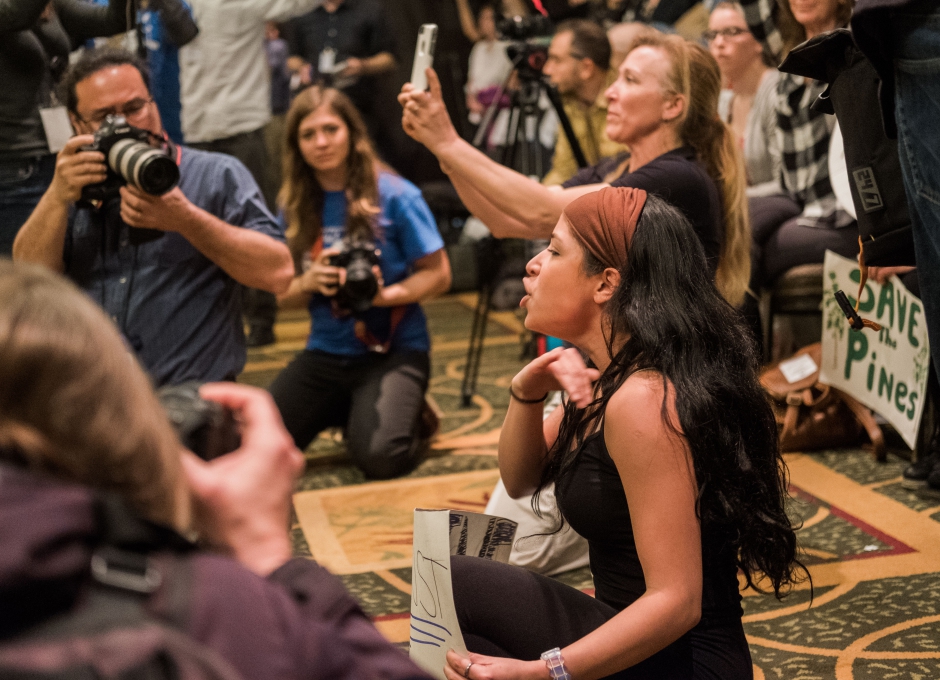 A protester seated at the floor of the Pinelands Commission vote. Credit: Tricia Burrough.

Smith argued that the economic benefits of the project are creating “a false dilemma” between job creation and preservation and energy resilience.

The capacity of the gas the project would generate “is not needed” locally, she said.