Trending
You are at:Home»Business»Plans for Cooper River Restaurant Taking Shape

Restaurateur Kevin Meeker and Chef Tony Clark hope to be in their new digs at Cooper River Park by the fall. It’s been six months since they won the county bid to renovate the former Lobster Trap building in Cooper River Park, and although the project is heading towards a late summer opening, restaurateurs Kevin Meeker and Tony Clark are no closer to settling on a name for their concept.

“It’s a difficult thing to name a restaurant,” Clark said. “You want to make sure it’s perfect. Usually it hits you in the head, a good name.”

As yet, however, nothing has taken root. So Meeker is looking to crowdsource a solution:

“I am offering a year full of dinners if someone comes up with a name,” he said; “12 dinners for two.”

(See below on submitting your suggestions to Meeker–ed.)

Family recipes with a lighter touch

In the months since announcing his partnership with the county, Meeker said he and Clark “have tightened up the concept,” for the restaurant, which he describes as a family-style eatery that will be “moderately priced” and “seasonal.”

He expects the menu to be comparable in price point to the dishes at his Haddon Township bar/restaurant, Keg & Kitchen, while bringing in “a little bit of the Philadelphia Fish and Co.,” his former Center City restaurant.

“I want to do some seafood that we don’t do here,” Meeker said. “Tony has a lot of things that he wants to incorporate. He lived in Vietnam, China, Spain, and he’s got a lot of ideas that we can work in there that will be stuff for foodies.” Clark said he is building the menu around family recipes, modified with a lighter touch.

For example, as the private chef of Norman and Suzanne Cohn for a decade, Clark picked up a matzoh-ball-and-chicken-consomme dish that he swears by.

“I think it’s going to be things like that,” Clark said. “I want things people remember [from]growing up with their grandmother’s cooking. But then once I get started, I want to put my twist to it, too.

“I want to try to take a lot of the good items that we grew up with and cook lighter,” he said. “I really want to concentrate on healthy food.”

The staff roster for the project is starting to round into form, too. Meeker said he is in talks with a wine and spirits writer who will help plan menu pairings, as well as another owner-operator “who used to run some restaurants in the city.” Clark said he plans to bring aboard some staff members from his Four Seasons days, including his longtime sous chef.

“We’re building a really nice team,” Meeker said, adding, “The waiting has been killing us.”

“I’ve opened and owned 11 or 12 restaurants, and I’ve had more people that I don’t even know say to me, ‘I can’t wait for that place to open,’” he said. “I had no idea how many people knew that it existed.”

Clark said he “would have loved to be open for the summer,” but knows too well the number and nature of the delays that can crop up along the way.

“I’ve opened a few restaurants, and not one has opened the day that they’ve said they’re going to open,” he said.

For Clark, the opening date, whenever it comes, will mean that he relocates back to his New Jersey hometown from across the river in Philadelphia for the first time since he graduated from Audubon’s Paul VI High School in 1980. He said he’s just begun apartment-hunting in the area.

“We’re excited to get back,” Clark said. “It’s something that I’m so pumped up about, to be back home in that area for the first time. I think I’m ready to show off. 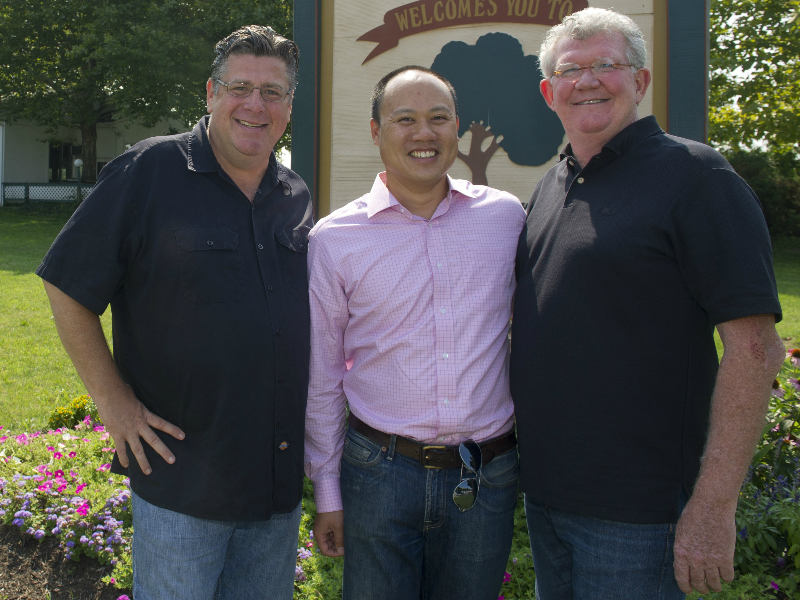 The ‘crown jewel’ of the county park system

Camden County Freeholder Jeffrey Nash called the restaurant “an important component for the $20 million renovation to Cooper River Park,” which he described as “the crown jewel of the county’s great park system.

“It’s the most used park and an economic engine,” accounting for some $10 million in annual economic activity, Nash said.

“When regattas come to this thing, it fills every hotel, every restaurant, and to have a quality park along the river is a great amenity,” he said.

“That’s why it’s so important for the park to have bank stabilization, proper viewing stands.

“It’s why we’re investing so much time and money to improve the park,” Nash said, including river dredging that is scheduled for August 2016.

Meeker said those county dollars are a worthwhile investment for Camden County residents as well as for out-of-towners.

“You’re going to be getting your money back,” he said; “It’s not a free ride. The dredging, the park improvements; just think if no one did anything. What they’re doing is bringing a place for people to go and meet.”

The exterior look and feel of the 7,500 square-foot riverfront eatery will include stone and copper accents designed in keeping with other structures in the park, including the Camden County Boathouse, foot paths, and signage, Nash said.

“Because we spent a considerable amount of time putting together a plan for the park over the last five years, we wanted it to match the aesthetics of the park and the river,” he said.

Clark agreed that the surrounding location will be both a draw for guests and an inspiration to his efforts.

“Every weekend, just being part of that, to have a nice little yard outside the restaurant…I want to do outdoor cooking eventually, put a nice grill,” he said.

“I’m a Four Seasons graduate, so detail is important, cleanliness is important, making sure that you’re on top of it every single day,” Clark said.

“When they throw me a beautiful restaurant, we’re going to keep it that way.”

(Want to throw your hat in the ring for a year’s worth of eats? “Like” the NJ Pen Facebook page and offer your best suggestion in the comments beneath the link to this article.)