Retired U.S. Marine Cpl. Joseph Logue, Jr., who was wounded in Afghanistan, will move to the borough with his family into a refurbished home provided through the PNC Homes for Wounded Heroes program. 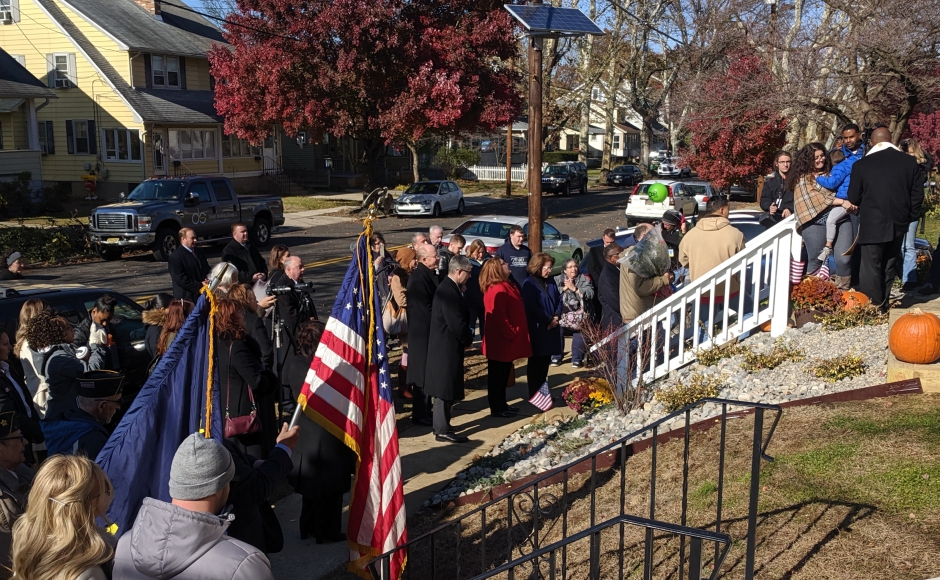 Collingswood is known for its reputation as a welcoming community, but its newest residents, the Logue family of Drexel Hill, Pennsylvania, were met in their neighborhood Wednesday morning with added fanfare.

Joseph Logue, Jr., a retired U.S. Marine Corps Corporal and Purple Heart recipient, was handed the keys to his new home as a gift from the PNC Homes for Wounded Heroes program.

The Logues are the fifth military family to have received a donated home through the program since 2014, said PNC Regional President Joe Meterchick in a ceremony at the Collingswood Church of Christ.

“This is a day that everyone here should feel great about,” Meterchick said. “We wish you and your children many years of happiness in your new home.”

The Richey Avenue twin, which dates to 1924, was extensively renovated over the past year, with upgraded flooring, woodwork, fixtures, cabinetry, landscaping, and outdoor fencing.

In addition to a mortgage-free residence, the Logues were also gifted a year of free cable and internet service, a season pass to Roberts Pool, and memberships to the Tatem-Shields American Legion Post for 2020. The cost of their relocation from Drexel Hill will also be covered.

Collingswood Mayor Jim Maley described the event as “a reflection of the kindness of Collingswood on steroids.

“We’re really thrilled that PNC selected this as the location for you and your family,” Maley told Logue, Jr. “It’s a great community activity. The whole region has been chipping in to help.”

One of the only people to know about the surprise ahead of time was neighbor Donna Cordrey, whose family resides in the other half of the duplex to which the Logues’ new home is connected.

Cordrey discovered something was up when real estate agents and PNC reps first checked out the property in 2018. They’ve been working on it for a year; she kept the secret for the entire time. 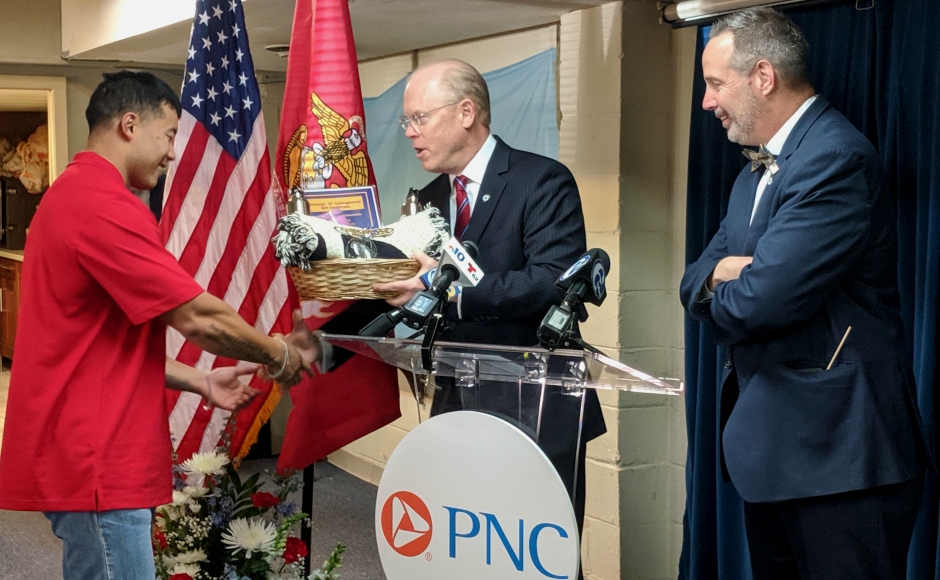 “It’s fantastic,” Cordrey said. She praised the block as “a great neighborhood to raise kids in.”

Joseph Logue, Jr. was born in South Korea and came to America when he was adopted by a U.S. Korean War veteran.

The Upper Darby, Pennsylvania resident enlisted in the USMC during his senior year of high school, and served from 2010 to 2015.

Trained as an Abrams tank gunner in the 2nd Battalion, Logue, Jr. and served in Afghanistan from 2012 to 2013.

In the course of action, his vehicle hit two improvised explosive devices (IED’s). Logue, Jr. was wounded during the second blast, for which he received a Purple Heart, among other medals and citations for combat action, good conduct, and service in the global war on terrorism.

His military career has made it difficult to return to work, Logue, Jr. said, describing “a lot of flashbacks and anxiety.”

He’s laying the groundwork for a sociology degree, but during the transition to civilian life, Logue, Jr. said he’s most focused on raising his children. The family is delighted to be doing so in a walkable town like Collingswood.

“We’re ready to be part of the Collingswood community,” said Erjola Logue, Joseph’s wife and mother to their sons, Charles and Jason. 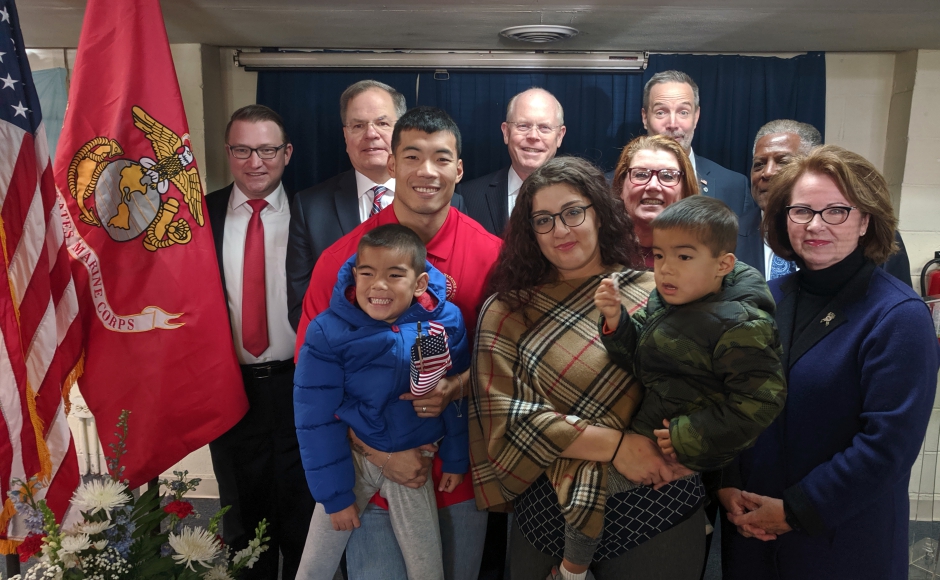 During the ceremony, Logue, Jr. thanked his family, including his mother, who was watching the proceedings via cell phone from her hospice care.

“If it wasn’t for them adopting me and bringing me to this country, I wouldn’t be able to give back,” he said.

Logue, Jr. applied to the Homes for Wounded Heroes program three years ago after hearing about it from a friend who was selected for one of its prior donations.

Nonetheless, the news that his family had been given a new home was stunning.

“It’s incredible; it’s above and beyond,” he said. “I’m still in utter shock about all of this.”