Robert J. Spavlik, 49, faces multiple charges and is being held on $125,000 bail after the incident.

A 49-year-old Oaklyn man who told police he was out of money and facing removal from his home was arrested Thursday after an alleged daylight robbery at a neighborhood gas station.

At 1:42 p.m. on June 12, Oaklyn police said Robert J. Spavlik entered the shop area of the Gulf gas station in the 700 block of the White Horse Pike.

Once inside, he allegedly hit the station attendant several times with a slapjack, and stabbed at him with a large kitchen knife. 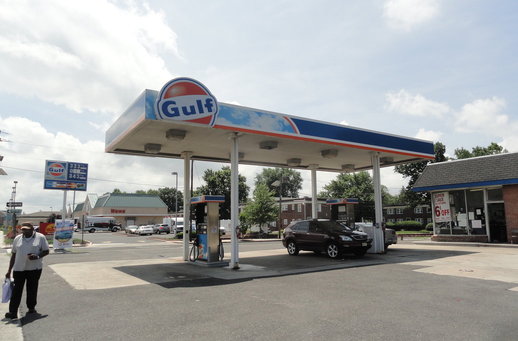 According to Oaklyn Police Chief Mark Moore, the attendant reportedly fended off Spavlik by grabbing the knife. Once he had control of the weapon, Moore said, the attendant surrendered a handful of cash, and Spavlik allegedly fled the scene.

Spavlik was apprehended three blocks away after a foot chase. The attendant suffered minor lacerations to his hand, but refused medical attention, police said.

Spavlik was charged with armed robbery, aggravated assault, possession of a weapon, theft, and resisting arrest. He was remanded to the Camden County jail on $125,000 full-cash bail.

Gas stations have become popular robbery targets in South Jersey, especially those near highway interchanges. Moore said that the most recent, nearby incident that he could recollect had occurred in Mt. Ephraim at the end of May, and that that suspect had since been apprehended.

With the frequency of such crimes on the rise, Moore encouraged citizens to “be more vigilant” and contact police at the first sign of trouble.

“Give us a reason to look into things,” he said.

Moore also added that service stations could do better by their employees by not leaving them to work shifts alone in such a climate.

All information provided courtesy of the Oaklyn Police Department. An arrest is not a conviction.