Philadelphia native Marie Gilbert blends her scientific background with enthusiasm for the supernatural and a love of writing.

Each of those is a title earned, not bestowed. The Audubon resident and grandmother of nine describes herself as “a super-heroine stuck in a grandmother’s body, and lives without indication to the contrary.

Gilbert has just published Roof Oasis, the first in a planned series of novels incorporating supernatural and science fiction elements in an apocalyptic, galaxy-spanning setting.

She spoke with NJ Pen about her introduction to steampunk, her South Philadelphia upbringing, and the ideas that helped jump-start her work. 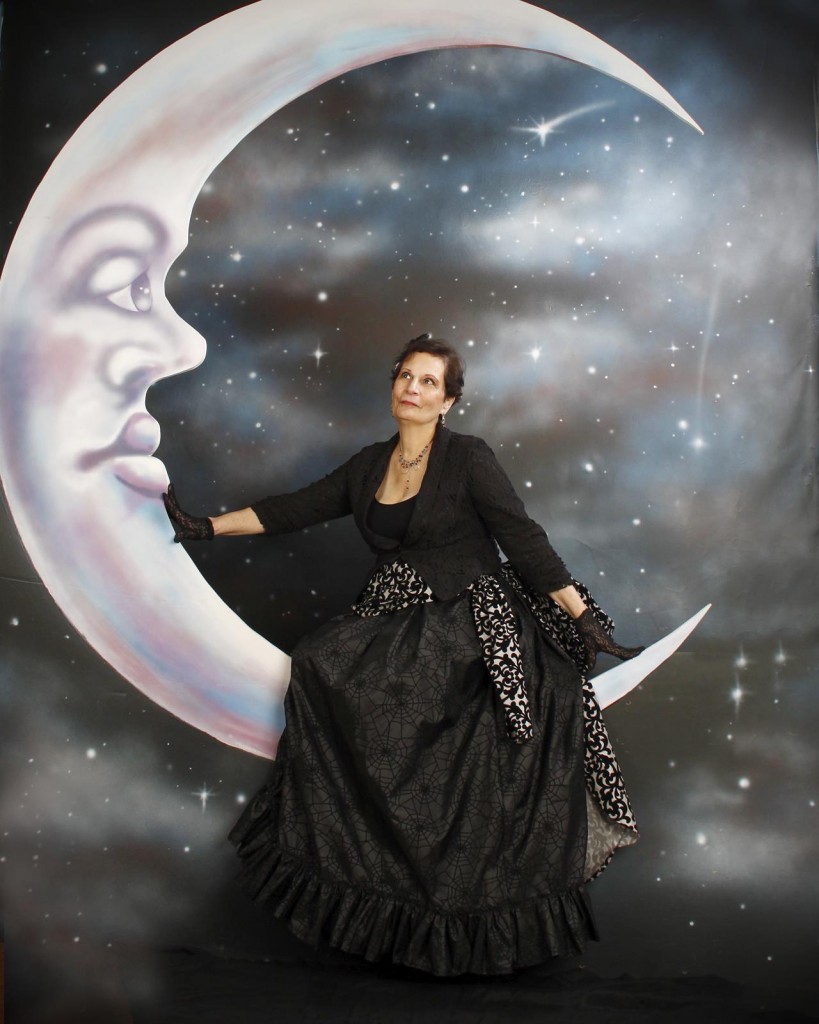 NJ PEN: How did you pick up the nickname “Steampunk Granny”?

GILBERT: I was working at the Academy of Natural Sciences.

I was the manager of the changing exhibit hall. I was the coordinator for the birthday party program, and I was part-time staff where they had the live animals, and I did the safari overnights. Plus, I was the mummy expert.

When I retired, it gave me more time to concentrate on my writing.

My granddaughter Allie Gilbert, also of Audubon, the oldest of my nine grandchildren, at the time was going to Moore College of Art & Design.

One day she came over to the museum. I was ready to flop on the couch because we’d had a busy day.

She said, “You’re coming to Dorian’s Parlor with me.” She drags me home, dresses me up in a steampunk outfit, hat and everything.

NJ PEN: For those who have never been, what’s the vibe of a steampunk gathering?

GILBERT: Anything that could be powered by steam is now on the table. Just think of Jules Verne; that type of atmosphere. Most of the outfits we wear are based on classic Victorian outfits with a few additions.

I’ve never seen anyone get drunk or misbehave. The men are very mannerly, and talk to you like they would in those days. People are getting to dress up the way they like to dress up. They have all kinds of shows going on, acts, music acts, magic acts, stage shows. It’s really nice to go somewhere where you can dress up, you can enjoy yourself, and be treated like a lady in the bar atmosphere.

I was hooked. I started going to the events with her, and because I have a blog, I started promoting Dorian’s. And now there’s more and more older people coming. One of the writers from the South Jersey writer’s group started calling me Steampunk Granny. 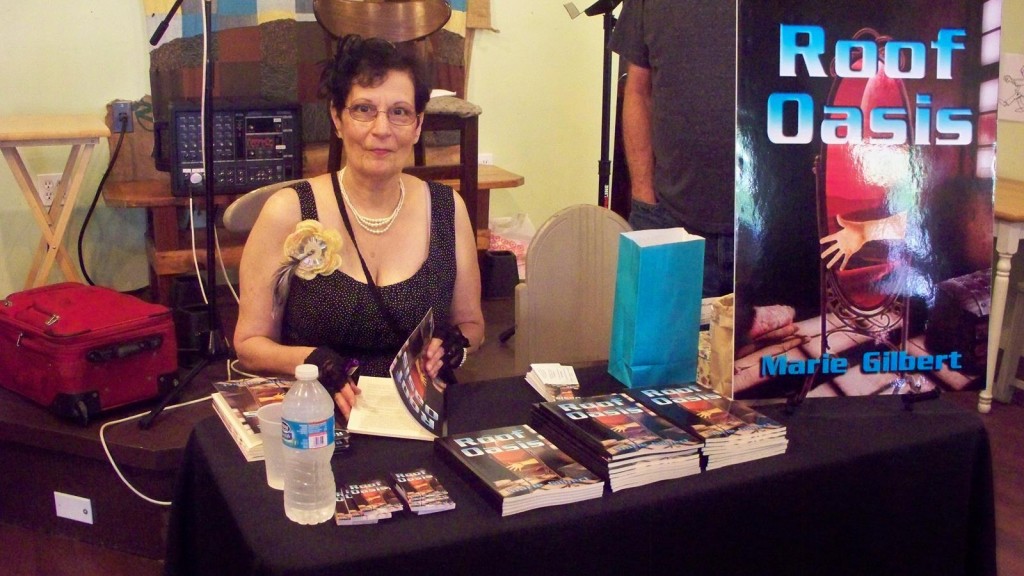 NJ PEN: So it was the social manners that you liked most?

GILBERT: I think it’s more the Victorian-meets-science. I liked some of the outfits and some of the gadgets. This one man came in dressed as a British soldier, but he had a mechanical arm, and he built this himself.

I think that was one of the Renaissance Eras. Industry was starting; it was a time when people looked out. [Now] we’re too busy at war and not enough exploration.

NJ PEN: Is that why the events of your story center on the fallout from a future world war?

GILBERT: I figure if I did it too soon, things are so political, people will not even read into the back message. If you go into the future, it’s far away removed so they can think about it.

I see what’s happening in the world around me, and it’s scary. I feel that we’ve lost our country to corporations. They get a bigger vote than us, and it’s really scary. This hatred of poor people; they’re trying to make people enemies of each other. Divide and conquer.

My father survived the Depression. He warned me before he died, “The corporations are taking over the government.” He said, “They are going to control the people because if you don’t do what they want, you don’t get stuff to survive.” That’s what you do first. As long as you have food and water, you can fight them.

That was the basis for this book: how easily a group of people, even one person, can take control.

NJ PEN: There are a lot of science fiction elements to your story—robots, aliens, space travel—as well as horror elements like demons and zombies. How do you weave all of those things together? 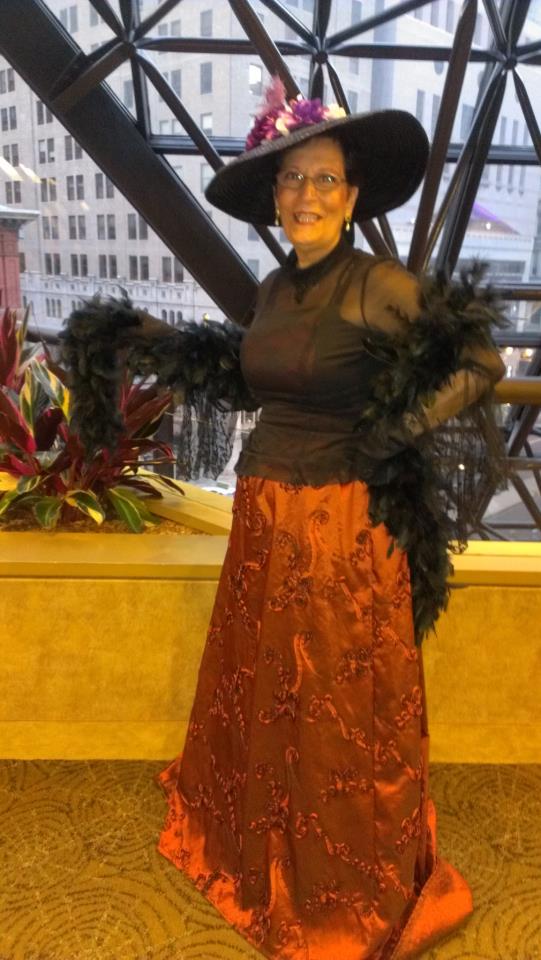 GILBERT: I was brought up during the 60s. I was born in 1947. I saw the space program. I grew up during this time. Thinking into the future is easy for me because you had Star Trek, astronauts landing on the moon. There was a hope that we could explore and go further. I think we were meant to start here and not stay here; keep going.

The main characters are twins, Michael and Lucy, raised by a father who’s a very brutal man. It’s their story of survival when the apocalypse does happen. Also, there’s an alien here. It fits in perfectly because I do believe there’s life on other planets. If you can find life in the most extreme conditions on Earth, you can find it elsewhere.

The Russians have a research station in Antarctica. They were drilling so deep that they found a frozen lake. In this frozen lake, they found bacteria. The world said, “If you bring this up, we don’t know if we would survive it.”

I’m saying to myself, “You get an evil man, he brings this up, you can mutate this and use it to your advantage. He started dominating the world, breaking up families, making slaves or soldiers. He started using biowarfare to destroy his enemies.”

NJ PEN: Is that where the zombies come into play?

GILBERT: It’s universal. You use the form of a zombie and get people thinking, “What happens if we have another Sandy or Katrina?” The government can’t help you.

I belong to the Zombie Squad. They helped Homeland Security do a fake zombie apocalypse to see if the police, fire, and ambulance would be able to handle a catastrophic event. The Zombie Squad teaches you how to “bug out” if you have to leave your house; how to survive until help can reach you. They teach you how to make your house secure for any kind of disaster.

We’re under siege and nobody realizes it. The indigenous people knew how to survive. It’s we modern folks who don’t know how to survive a catastrophe. I would say my eyes were open to a lot of the things happening from my father and working at the Academy.

NJ PEN: You’ve written a lot about your parents and your upbringing in their South Philadelphia grocery store on your blog (under the title “Surviving My Gene Pool”). What was your neighborhood like?

GILBERT: We grew up in South Philly in a grocery store. We had to keep up our first honors, work in the store, do our homework in there.

[It was at] 15th and Porter, near the Spectrum. I went to a Catholic School all 12 years. I was a Goretti Gorilla. We were called that because we didn’t take s–t from anyone.

NJ PEN: How do you feel life in South Jersey compares with that experience?

GILBERT: I think South Philadelphia people are smart and streetwise. I moved here specifically because I wanted a yard bigger than this table. I wanted trees and birds and bugs and bees. Whatever happens in the big city trickles down into suburbia.

Plus, the South Jersey Writers Group. Everybody helps each other. My editor for this book is one of the members. This other writer, Glenn Walker, got me the gig writing for this Canadian pop culture site, Biff! Bam! Pop! So we all help each other.

Marie Gilbert will be signing copies of Roof Oasis at the Berger Building in Philadelphia (229 Arch Street) this Saturday, August 30, from 11 a.m. to 2 p.m.