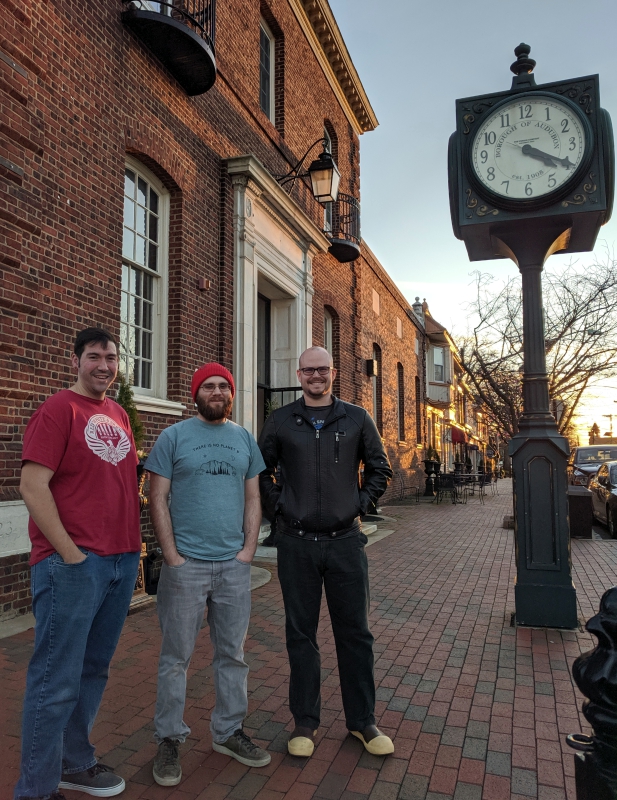 After weeks and months of questions, inspections, and strangers pressing their noses up to the windows, brewers Chris Bauman, Erik Hage, and Stephen Picone will welcome customers to Audubon’s first microbrewery, Red White & Brew, next week.

By the time the official grand opening rolls around on December 14, the brewers may finally stop hearing about their protracted timeline.

Much of that is owed to hours spent bringing the historic Audubon National Bank up to code after a change of use (it last operated as the Audubon Auction House).

All three did most of the work by themselves while also holding down full-time jobs.

“We built our own [oak trim]  bar, made our own glycol cooling system, fitted out our own fermenters, did this entire floor,” he said.

“We built our own cold room from scratch, turned another vault into a cold room, re-did the bathrooms.”

Putting in the work deepened their relationship with the property “because there were so many things we got the pleasure of re-doing,” Bauman said.

It also led to some surprises along the way, like removing a basement’s worth of drop ceilings and antique fire suppression systems, and grinding down its floors—only to discover they couldn’t brew down there.

As they chipped away at the work, Bauman realized they’d turned the corner when “the building” became “the brewery,” in their conversations. 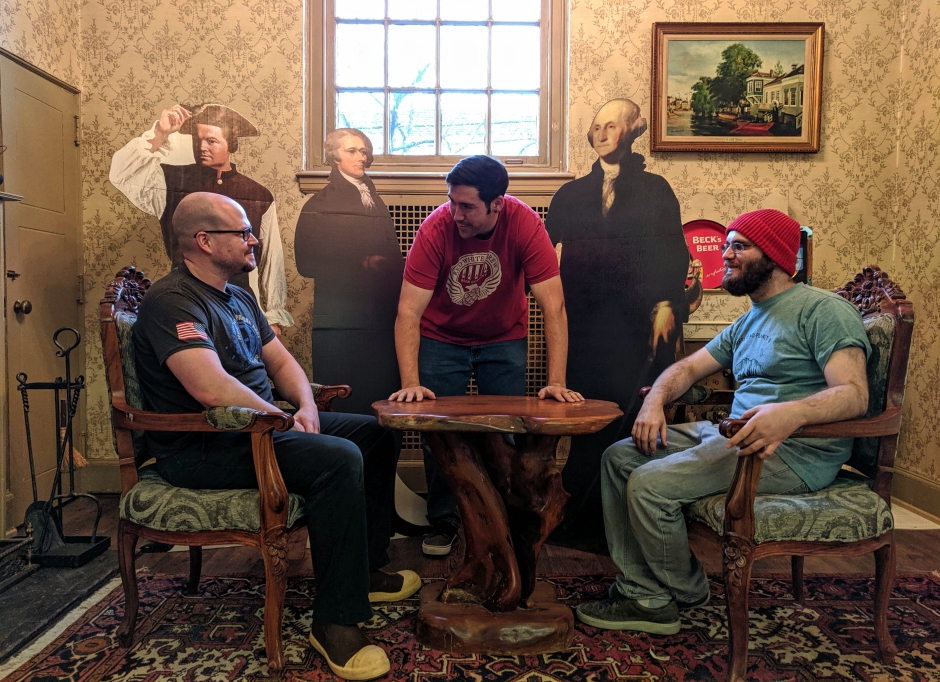 There’s more yet to be done to get the space where they’d like to take it, most of it cosmetic renovations, including those planned for the second floor of the property.

But plenty of the character of the 1923 bank still shines through in their efforts.

“You’ll see the mechanics of the door, the original 1920’s clock.

“You have the walk-up window, he original [bank]  president’s room, the old Audubon train station sign,” he said. “Plaster crown moulding; we did everything we could to preserve that.”

Its vaulted ceilings and high windows let in a substantial amount of natural light, brightening up the space considerably during the daytime. It also showcases the half of the first level that’s been given over to brewing operations, which, like the fit-out of the space, is a hands-on, D.I.Y. affair.

Bauman, Hage, and Picone will brew weekly on its three-barrel system, which puts Red White & Brew squarely in the downtown nanobrewery category, effectively producing just enough beer to be consumed onsite. The system will expand its capacity as the business grows in volume, Bauman said, but the brewers’ approach is to produce “standard recipes brewed correctly.

“Small breweries are almost like pizza places,” Bauman said. “Every town’s going to have one. Sometimes you just want plain pizza done correctly.”

From a flavor profile, “We’re going to be more of a malt house than a hop house,” he said. “We’ll probably never see more than two IPAs at a time.” 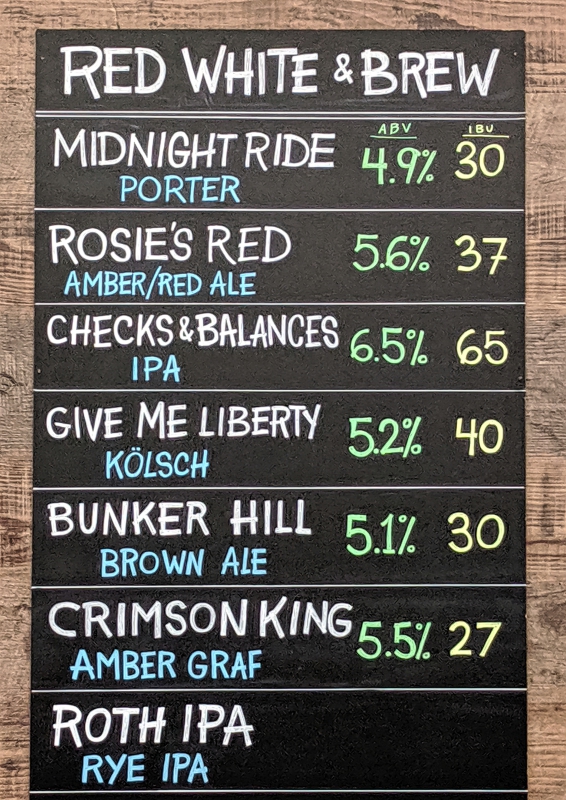 The tap list is built around four mainstay varieties, all within 5 and 7 percent ABV: Paul’s Midnight Ride Porter, Rosie’s Red (Amber) Ale, Checks and Balances IPA, and the Give Me Liberty Kolsch.

For opening day, the Bunker Hill Brown Ale, Roth (Rye) IPA, and Crimson King Graf will round out the roster.

After years of investment into the project, Picone said he’s excited to create new recipes and present them to an audience.

“One of the things we’d really like is to introduce people to what [craft beer]  can be,” he said. “That’s one of the best parts.

“I’ve always liked the creativity aspect; making something that’s a twist on a classic, or my version of a classic,” he said.

The brewery tasting room holds a capacity of 60 patrons with fixed seats for 32 and another 20 to 30 in the open areas. A mix of round tables, high-tops, and a bar rail is offset by a smaller, conversational alcove. Meanwhile, The President’s Room, the former head office of the bank, features a wall safe, fireplace, and cut-outs of American historical figures.

It’s all in keeping with the name and branding developed to establish the business in a community that describes itself as “the Most Patriotic Small Town in America.”

“We’re not history buffs, but we’re all fans of American history,” Bauman said. “I make the correlation that American craft beer has had a revolution in the industry.

“We’re really fortunate to be in the states making beer because we have freedom to roam and all kinds of access to different ingredients,” he said. “We’ve seen what happens when you don’t have the smaller-batch craft stuff. We’ve seen what it does to bring this smaller industry online.” 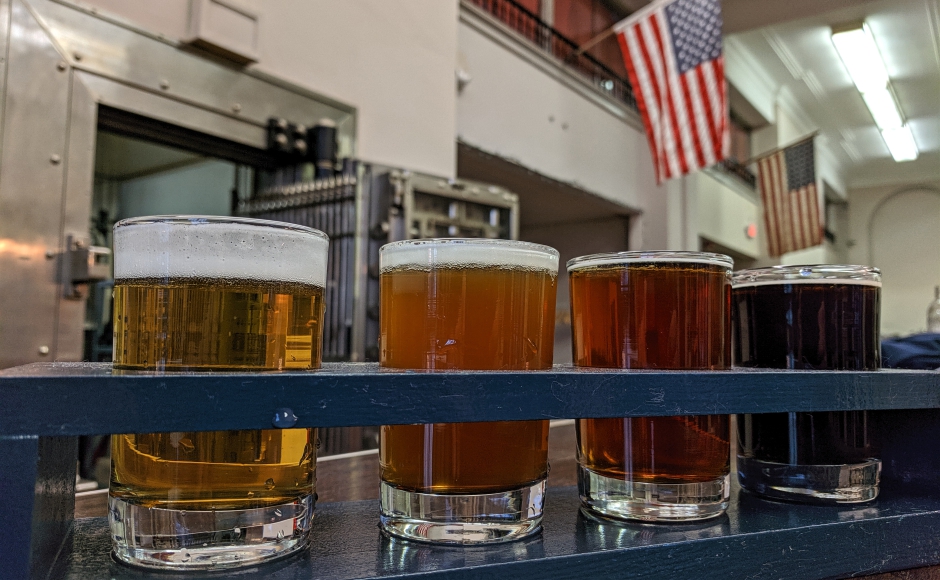 The brewers are most anticipating the chance to establish Red White & Brew within the broader business community of West Merchant Street.

Bauman wants to collaborate with neighboring businesses on recipes, and noted that Red White & Brew has already hired several part-time employees from Audubon and the surrounding communities.

“We want to be long-term here,” he said.

“We’re trying to make partnerships with everyone.”

Red White & Brew is located at 100 West Merchant Street in Audubon. Hours are 6 to 10 p.m. Thursday and Friday, and noon to 10 p.m. Saturday. Sunday hours will be added soon.

Click here to support our work with an NJ Pen subscription.