A second-story fire on the White Horse Pike forces two households from their residences and shuts a hair salon with smoke and water damage. No injuries were reported. 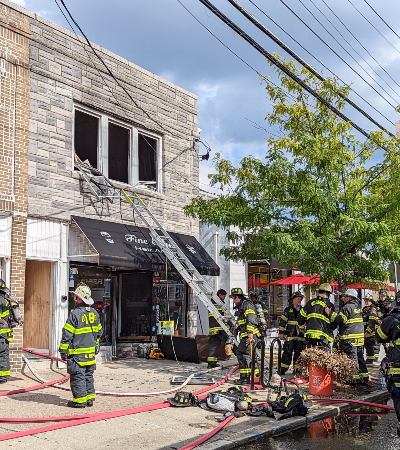 Scene of an apartment fire on the White Horse Pike in Haddon Township. Credit: Matt Skoufalos.

Two households were displaced by an apartment fire that shut down a block of the White Horse Pike in Haddon Township Saturday afternoon.

Assistant Westmont Fire Chief John Young said companies were dispatched to the 600 block of the White Horse Pike at 3:13 p.m. for a report of a building fire.

They arrived to discover smoke and fire showing from a second-story apartment above the Fine Edgez Hair Artistry salon.

Within about half an hour, the fire was brought under control.

Although the flames were contained to the second-floor unit, the salon below and a first-floor apartment in the rear of the building sustained smoke and water damage, forcing tenants out.

Fortunately, no injuries were reported to either residents or firefighters as a result of the incident. The residents were relocated temporarily by the American Red Cross. The fire remains under investigation by the Haddon Township Fire Marshal.

Westmont firefighters were supported on the scene by companies from Audubon, Bellmawr, Collingswood, Haddon Heights, Oaklyn, and West Collingswood Heights, as well as by EMTs from Mount Ephraim and Cherry Hill, and support services from Cherry Hill Rehab 13.

As first responders worked to clear the scene, neighbors on the block watched the commotion from the other side of the White Horse Pike, which was shut down in both directions. 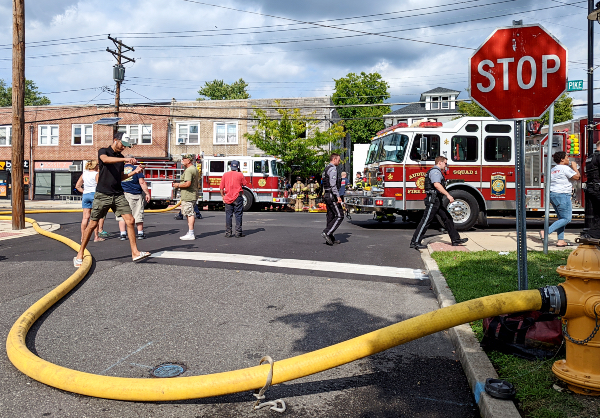 Justin Ajuba of Effizzi African Hair Braiding, located next door to Fine Edgez, said he had been working on clients when someone knocked on his door yelling “Fire, fire!”

“We had to just get everyone out,” Ajuba said.

“It’s a bit of a shock for everyone,” he said, “but everybody’s okay.”

Neighboring businesses on the block were fortunately spared anything beyond minor smoke conditions, which were ventilated out.

Despite the commotion, Ajuba said his clients were taking the events of the day in stride.