The Board of Education member and longtime borough resident replaces outgoing Commissioner Mike Hall, who announced his retirement effective December 5. 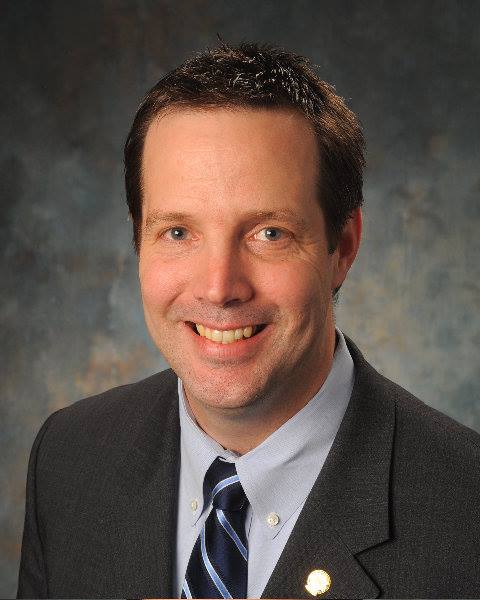 Collingswood didn’t have any borough government candidates up for the vote during Tuesday’s election, but local leadership will see a new face join the trio of commissioners in December nonetheless.

The borough announced today that long-serving Commissioner Mike Hall will be replaced with Board of Education member Rob Lewandowski.

The move was precipitated by Hall’s decision to step down from his post ahead of the May 9, 2017 borough government election.

The former Collingswood fire chief and 11-year borough commissioner will continue his career in the private sector, but is relocating with his family to Ocean City, New Jersey.

Lewandowski, a member of the Collingswood Board of Education since his election as a write-in candidate in 2014, has also previously served on the borough planning board. He will fill Hall’s post as Commissioner and Director of Public Works, Parks and Recreation on an interim basis, and intends to run for election with his fellow commissioners in May.

“I’m just really grateful for the opportunity,” Lewandowski said. “I hope the people who know me know that I love Collingswood, and the people who don’t, that they’ll learn that’s the case.”

Lewandowski, who works as the communications director for the New Jersey Laborers’–Employers’ Cooperation and Education Trust, is a 14-year Collingswood resident, husband to Barbara Katz-Lewandowski, and father to three school-age children. He said the appointment offers an opportunity to connect with residents from throughout the borough, and likened it to the caretaker role that coaches and other volunteers share in “a community of doers.

“The role of commissioner is something that is a big deal and isn’t a big deal because there’s so many people in our community that are doing things to help out,” Lewandowski said.

“What makes this so exciting is to be part of a team of 14,000 community members who care about our town,” he said. “I’m so thankful to be given this opportunity to serve as commissioner. I’m going to try to do my best to improve quality of life and provide services.”

Hall agreed with that assessment, citing the myriad groups of volunteers who color life in the borough as making the role of local government easier.

“At the commissioner level, we just have to support the good ideas they come forth with [through]funding or logistics and coordination from department heads,” he said.

“I think that’s what makes life here better than [in] most  [places].”

Hall said that Leonard and Maley, who first invited him to campaign with them 11 years ago, should offer his replacement a similarly smooth transition.

“Back in the day, the fire chief used to get involved in everything,” Hall said. “Once retiring from the fire department, it was a no-brainer to work with them again. Instead of sitting at the table as a fire chief, I was sitting there as a commissioner.”

Hall admitted that stepping back from his political role will take some getting used to. He will be on hand to help participate in the borough tree-lighting and holiday parade, in which he’s either marched or driven a fire truck since its inception, before stepping down from his position on December 5.

“The town’s been very generous to me and my family,” he said. “I wish everybody well. I’ll be around.”

Collingswood Mayor Jim Maley called Lewandowski “a natural and great fit” who “brings a little something different” to the borough commission.

“There’s a new energy that comes with somebody new being in it,” Maley said. “He’s younger, so he’s got a little different view of everything. At the heart of it all is that he loves the town, he’s dedicated to the town, and he’s been giving to the town for years now. That has always led to great leadership and making more great things happen for our town.”

Maley said all new commissioners face “a bit of a learning curve,” but that Lewandowski’s experience in the labor industry would be leaned upon in upcoming infrastructure projects. He also said Lewandowski’s character would help him sort through unforeseen obstacles.

“He has the basics that you need to make a successful commissioner, which is dedication to working hard and a love of the town,” Maley said.

Lewandowski will vacate his position on the Collingswood Board of Education, to which voters added a full slate of challengers on Tuesday. The board will designate his replacement according to its own process, Maley said.

Commissioner Joan Leonard said Lewandowski’s energy and enthusiasm for the borough will be an asset to the community.

“What I hope from this is that people will continue to show their interest and be motivated to be part of all of the levels of public service,” Leonard said, citing Hall as “a top role model” for the same.

“Collingswood has a great history, and I want to see that we keep preserving our history while we move to the challenge of the future, which is upgrading our infrastructure,” she said. “We’re going to continue to promote volunteerism as a part of that to keep everybody in the mix with what they really love in Collingswood, which is the community spirit.

“I’m hoping that all the things we do are big things in the end,” she said.

Lewandowski will be sworn in as commissioner in a special meeting December 19.