Neal Rochford took his oath of office Tuesday, returning with fellow commissioners Jeff Kasko and John Moscatelli. All three won an uncontested election May 9 in which Rochford was the top vote-getter. 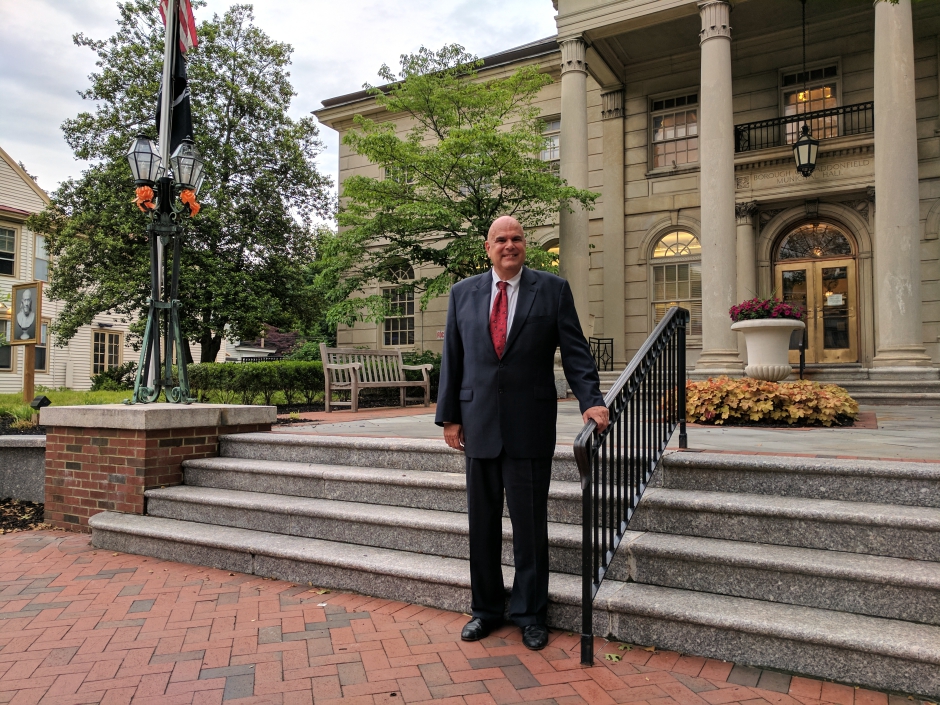 Four years later, all three were returned to office in an uncontested election.

Their commissioners said their ability to work together is a shared strength, but left the question of which would be mayor to the polls.

On Tuesday, the commissioners renewed their oaths of office, as the local government re-organized along nearly identical lines. 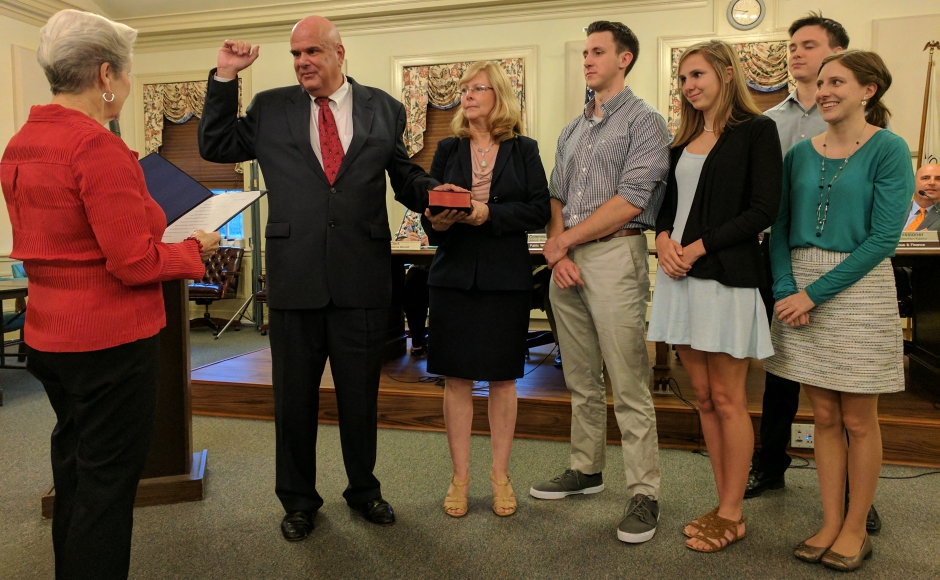 In his first official capacity, Rochford complimented the work of his fellow commissioners, and promised steady, non-confrontational teamwork would be the hallmark of their leadership.

He praised Kasko for shepherding the borough through its purchase of the Bancroft property, water utility sale, and library renovations, and Moscatelli for his commitment to a robust roadway replacement program.

Turning next to his own agenda, Rochford ticked off a handful of key issues, from continuing the roads program to sustaining the local business district. Redevelopment and cultural preservation are foremost on his itinerary, with plans for the future of historic Boxwood Hall and the Bancroft parcel near the top of the list.

A redevelopment plan for the Bancroft site hasn’t yet been finalized, but Rochford said he’d like to put the finishing touches on it by the fall of 2017. As for Boxwood Hall, “we have to make some decisions,” the mayor said. 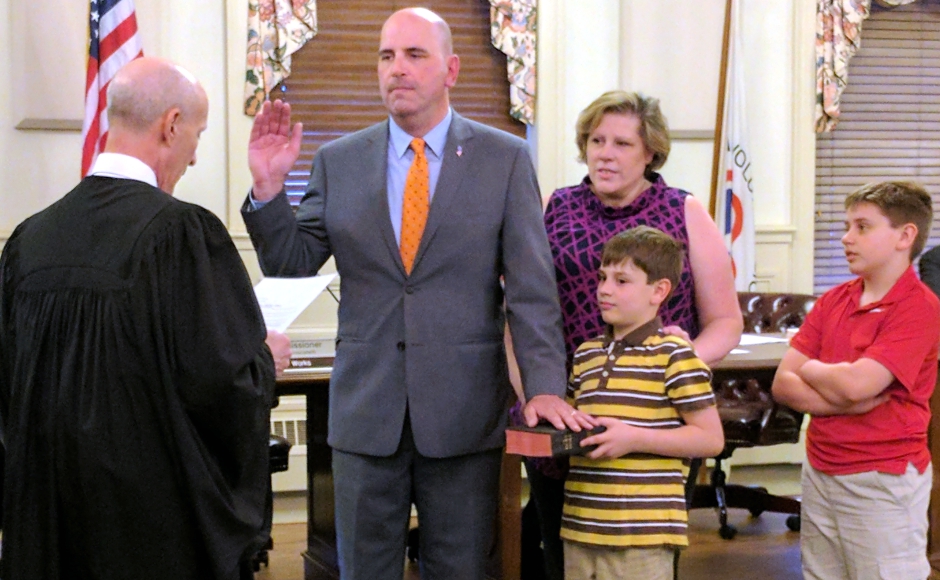 A group of residents has proposed transforming the property, which was bought by the borough to quash a development plan, into the Boxwood Arts Theatre and Cultural Center.

That plan has faced objections from local preservationists (as reported by Kevin Riordan of Philly.com) who appeared at Tuesday’s government meeting with an attorney to publicly decry the project.

Rochford noted the “difference of opinion” and promised the issue would be examined thoroughly.

“We’ll take a good hard look at it,” he said. “We’re not going to take any shortcuts.”

Rochford described himself as both a lifelong borough resident and a believer in a progressive approach to its stewardship. The mayor said he wants Haddonfield to continue to attract “a vital group of people” who are excited to live there.

“If we can manage things in a positive way, we can keep this town hopping,” Rochford said.

That includes supporting the long-term sustainability of a business district that he believes can be more business-friendly. Recently, the borough passed an ordinance relaxing parking restrictions for downtown eateries, which Rochford said was a necessary move to attract restaurateurs.

“The way people’s buying habits are, we’re really going to have to put our heads together to get the right mix of stores that have staying power,” he said. 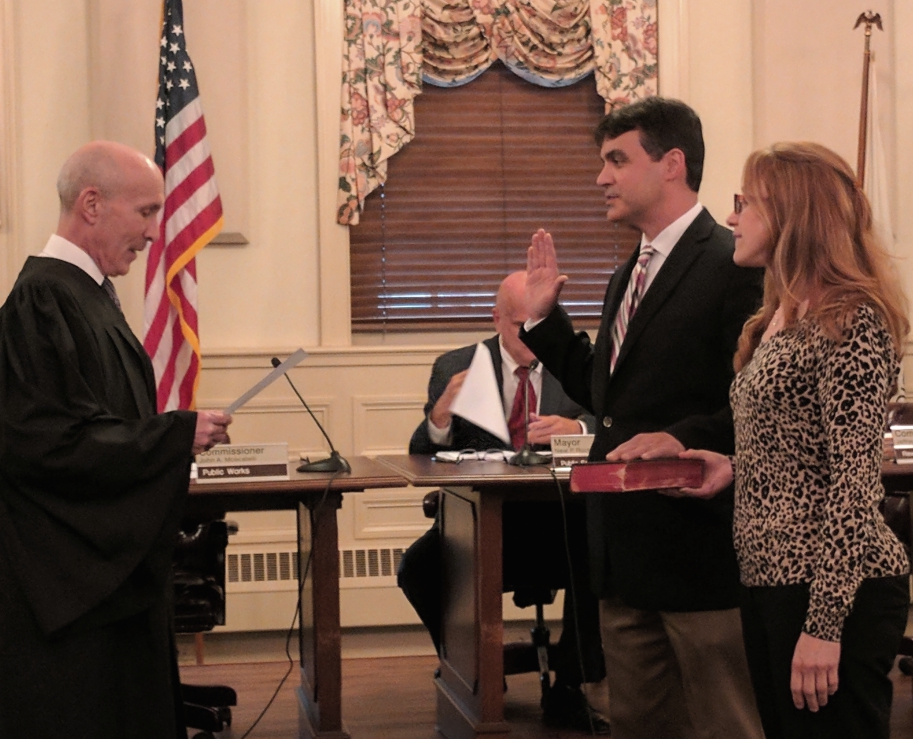 Haddonfield Commissioner John Moscatelli takes his oath of office after having been re-elected in May 2017. Credit: Matt Skoufalos.

The mayor said he also has an eye on impending retirements in the borough police department, technological efficiencies of the local government, and finding ways to keep costs low to retain generational residents who want to retire in Haddonfield.

“The best people that I have worked with and work that I’ve done is at the local level, right here in Haddonfield,” he said.

“It has been a high honor for me, and a privilege, to serve as mayor and commissioner of this great town,” he said.

“I pray, as always, that we will listen well, make good decisions, and move forward to get things done for the people of Haddonfield.”

“I’m looking forward to another four years of working hard and getting a lot accomplished for the town,” he said.