Trending
You are at:Home»Arts»Rowan Students Tackle ‘Music of Social Justice’ in Concert Series

University band director Joseph Higgins said the works are intended to connect audiences, students, and faculty on topics that are relevant and that can be difficult to put into words. 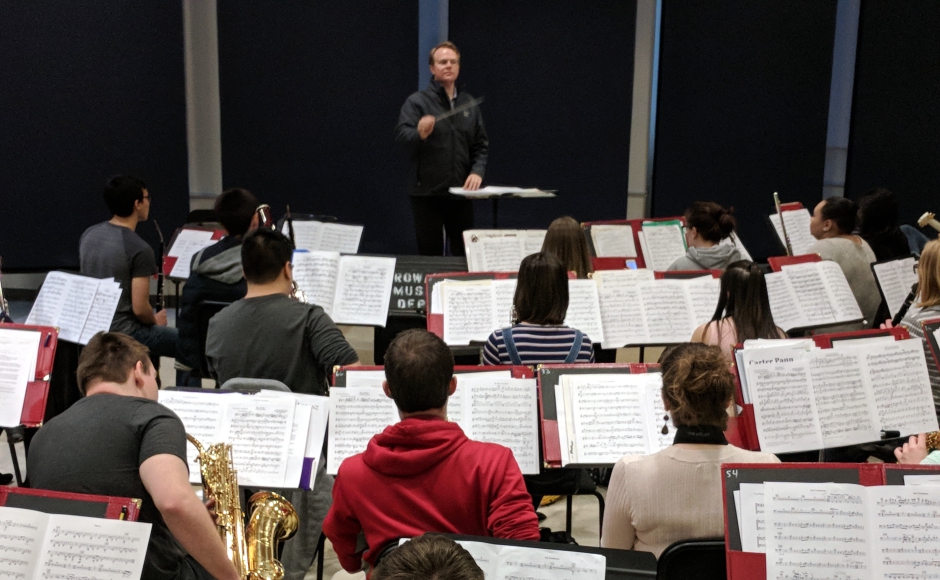 It’s Presidents Day, and the Rowan University wind ensemble is picking its way through Leonard Bernstein’s Slava! A Political Overture in a practice room at the Glassboro campus.

Band Director Joseph Higgins leans in once or twice, adjusting a piccolo here, a trumpet there, settling on which parts of the score should be voiced by which instruments in the room.

It’s just one of the many ways in which the group is working to draw contemporary parallels in the themes of the music for its spring concert series, “Music of Social Justice.”

“It started with us wanting to do any kind of broad theme that an entire college of performing arts could latch onto,” Higgins said. “I’ve been tired lately of going to band concerts where it’s just a bunch of pieces put together. It seemed like a waste of an opportunity to really explore some timely theme or social attitude with our students.

“It connects academically; obviously, it connects politically,” he said. “Every week there’s something happening in the news that can tie into one of the pieces of the theme.”

Those themes sprawl from immigration to labor equality to gender and civil rights. Many of the pieces of music will be unfamiliar to general audiences, but they fit a relevant contemporary context as well as a historic one.

Venezuelan-born Ricardo Lorenz will be on hand March 5 to hear the Rowan wind ensemble perform his 2008 work El Muro, which describes the political walls that divide people and the music that brings them together. 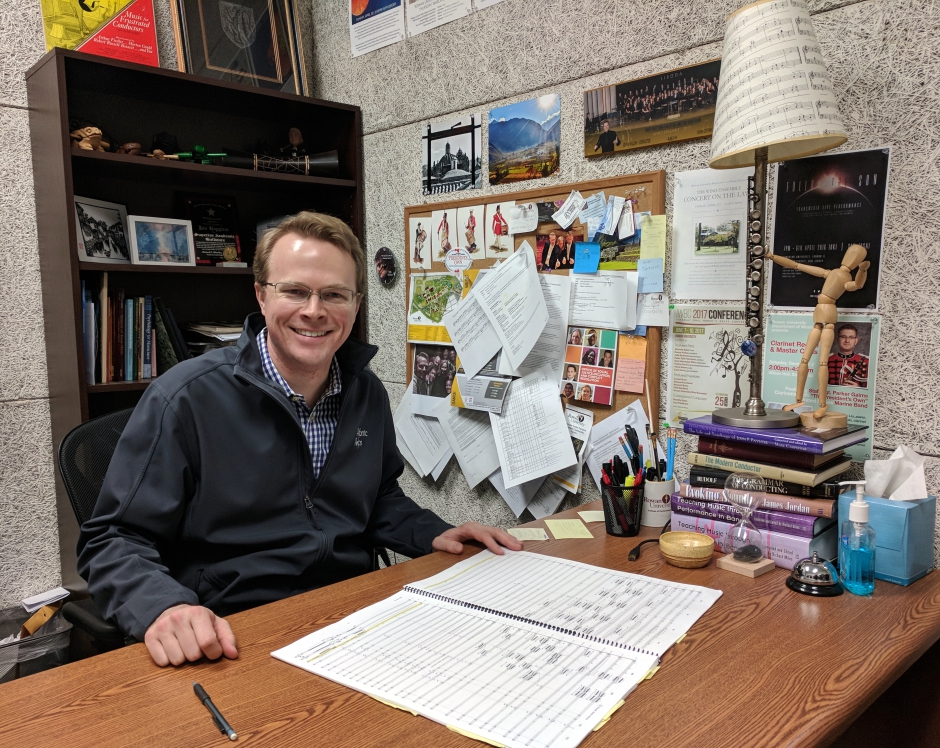 “Every concert, we end up with the audience talking about the issues, if not the music,” Higgins said.

“But we’re not discussing any policies. We’re using our medium; what we can handle.

“We’re looking at how music breaks down barriers between cultures. By the end, you’ll have a nuanced and rich look at some of these ideas.”

Higgins said curating the selections for his students, many of whom are studying to be music educators, was an exercise in the diversity of composers whose works are typically performed.

In professional orchestral settings, they may only encounter works by white composers intended for white patrons; in the university, Higgins sees an opportunity to broaden their musical vocabulary.

“One big discovery for me and for a lot of my colleagues is what a variety of composers have written a lot of quality pieces that I had not heard of,” he said. “Most of my students are going to be music teachers; hopefully, they’ll go forward with the thought that this is normal.” 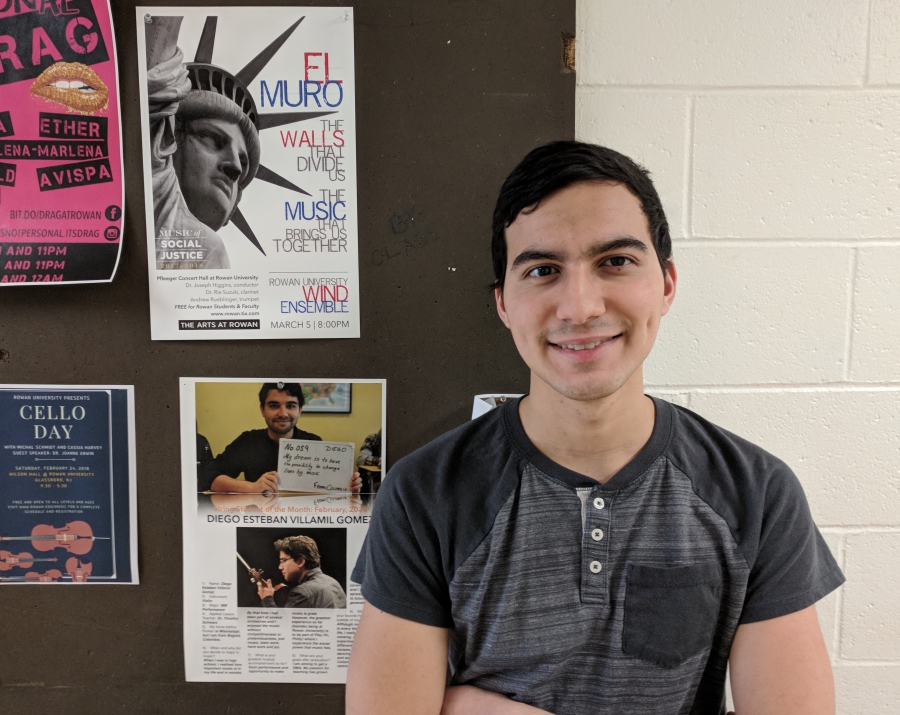 Shawn Garrone of Egg Harbor Township is one of them.

An oboist and English horn player, Garrone said the selections are topical, and that the student performers are looking forward to bringing their own experiences to them.

“All music is social commentary,” he said.

“It doesn’t matter that the composer didn’t write it now, you can still apply what they meant at those times to what’s happening now; that’s what we did with this programming.”

Whether the works are understood as commentaries on specific events, Garrone said audiences will still leave with some emotional impression from the exchange “because everyone gets to listen and there’s no condition placed on it.

“You can’t separate your emotions from your performance, so even when you’re performing a piece that was made a long time ago, who you are as an individual is going to affect how you would play that piece,” he said. Percussionist Garrett Davis of Pine Hill said the mixed-media performances, which will include narration, extensive program notes, and visual accompaniments, will “really add to the next level of the meaning.

“I think it’s really cool,” Davis said. “Each song has its own meaning in these concerts.

“Anyone who comes in expecting to just hear some band music, the narrations put together the last puzzle piece.”

Rowan clarinet professor Rie Suzuki, who is accompanying the ensemble on a new, Jonathan Leshnoff-commissioned concerto for clarinet and winds, said the program is “not just a collection of pieces.

“Sometimes people avoid this type of theme, and then just play it safe—Beethoven, Mozart—but something in this theme definitely makes you think,” Suzuki said. “As a bicultural person, I can bring my experience, and I can see both sides. Luckily, the musical field is a language; upon that, this is definitely the way we communicate.”

Higgins is sensitive to the notion that discussing complex issues at the root of concepts like social justice can be fraught with difficulty. But the emotional directness of music outstrips what can be achieved in even some of the most productive classroom dialogues. 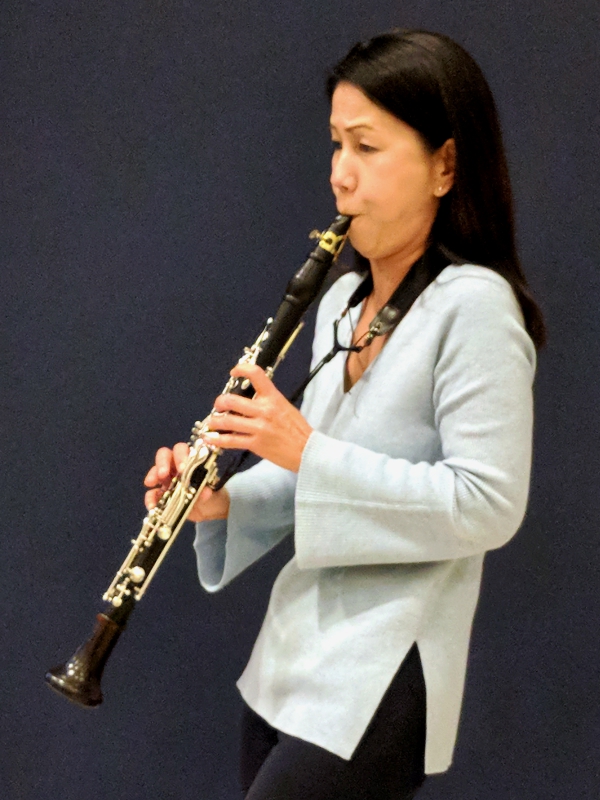 “What’s so nice about the music is you don’t have the words,” Higgins said.

“You fill the notes or the words you’re singing with your own expression.

“So they’re really participating in this immigrant story; in painting the pain of the Birmingham bombing.

“They may never know what that kind of pain feels like, and I hope they don’t,” he said.

“But there’s some empathy that you get from sharing a piece of music like that with an audience and the energy that you get.

“They will have a better idea of what the person who wrote that piece was trying to express.”