Trending
You are at:Home»People»Run for GMO Labeling Takes Family from Alaska to Collingswood

Father and son runners Brett and David Wilcox will conclude their transcontinental run in Ocean City on Saturday.

It’s 2,887 miles from Sitka, AK, to Collingswood, NJ, and the Wilcox family has covered just about every one of them on foot.

For the past seven months, Brett Wilcox and his son David have been running across the country to raise awareness of genetically modified organisms (GMOs) in the food supply. At 15, David Wilcox will become the youngest teen transcontinental runner in America when his journey concludes in Ocean City on Saturday. 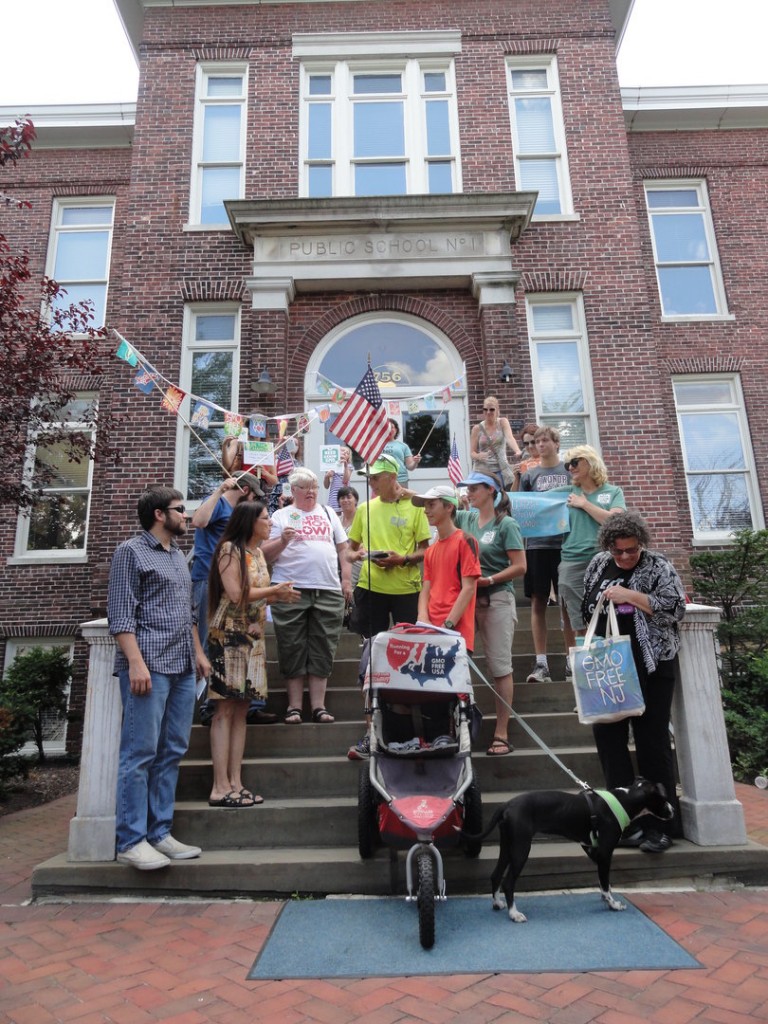 En route Thursday, their journey took them from Philadelphia into the heart of downtown Collingswood, where they were received at the steps of the Old Zane School building by a crowd of supporters.

In 2012, when Thomas co-founded GMO-Free NJ, she said she felt “pretty alone” in her principles.

Today, with genetically engineered food labeling legislation having been introduced in 26 states, including New Jersey, she feels connected to a larger movement.

“There are people educating themselves every single day” about GMOs, Thomas said. “We want accurate, truthful labels [on our food].”

‘It’s the past and the future connected’

Collingswood Commissioner Joan Leonard credited Thomas with mustering support for the issue of GMO food labeling, and ultimately, with getting Collingswood to become a stop along the Wilcox family’s journey.

“GMO-Free NJ is the first group of its kind in New Jersey and they’re Collingswood-based,” Leonard said. “Because they did it here, people stopped here.”

Leonard said that the centennial slogan of the borough—“building our future by restoring our past”—speaks to the issues raised by opponents of genetically engineered foods.

“Do you think 100 years ago we had to talk about GMOs? Or did we just grow healthy food in good soil?” Leonard said. “It’s the past and the future connected.

“We lose things along the way that we have to go back and revisit,” she said. 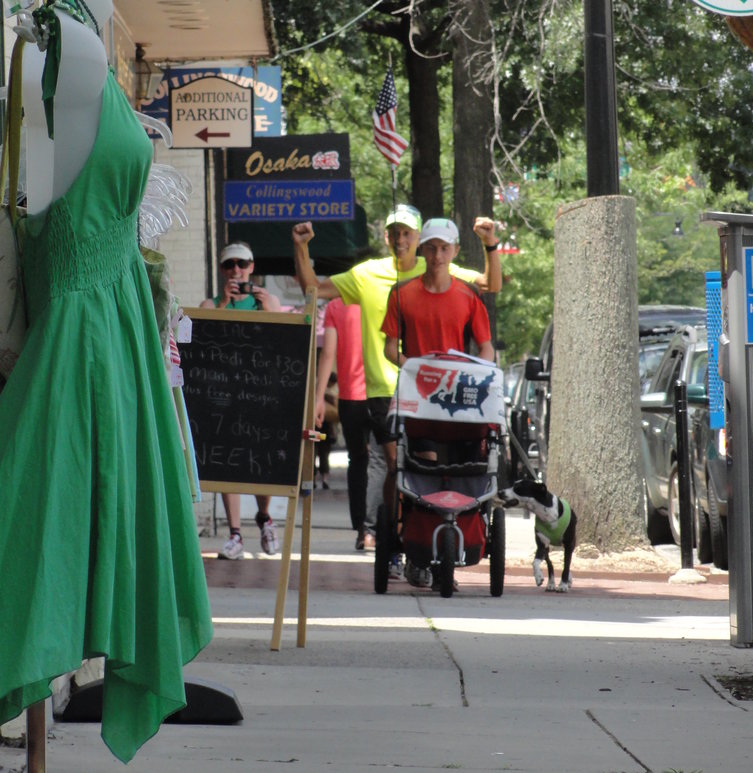 ‘You can’t replicate the experience’

Life in a 24-foot trailer is cramped for a family of four, said Brett Wilcox, and even moreso with two dogs. The family started the run with Angel, 15, and picked up Jenna, a bull terrier mix puppy, at a rescue shelter in Texas.

“It’s required of us to be extremely respectful of each other,” he said.

When they first began the run on January 18, Brett Wilcox said, he and David were only covering about 15 miles a day. That ramped up to 20 by March. Jenna runs with them for stretches at a time, and then hops into a jogging stroller when she needs a break.

The journey itself has been meaningful for the people they’ve met as much as the things they’ve seen, Brett Wilcox said. As they crossed the Ben Franklin bridge into Camden City, father and son passed out seed packets to residents and chatted with them about their cause.

“Really the memories [of this trip]are of the people who don’t make the news a lot,” he said.

Of course, there were plenty of moments of natural beauty, too.

“In Navajo Country in Arizona, I think I saw God there that day,” Brett Wilcox said. “David rounded the corner; there was something majestic about the size. The scale was something really beautiful.” 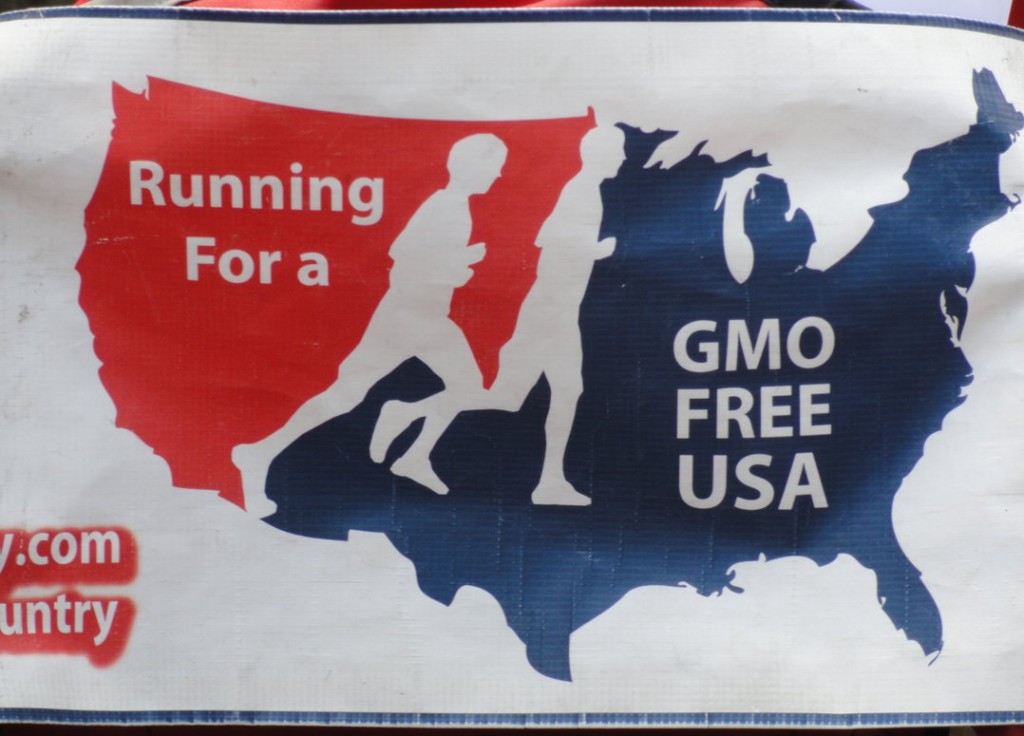 Together with her daughter Olivia, 13, Kris Wilcox has supported her son and husband on the cross-country trip, keeping them well supplied, and setting up the trailer in which the family sleeps.

Both parents quit their jobs to make the journey, and have been fund-raising along the way to complete it.

“The logistics are crazy,” Kris Wilcox said. “I’ve had to learn to be extremely flexible.

“We’re going to be working hard to pay it off, but you can’t replicate the experience,” she said.