Trending
You are at:Home»People»Ruti: a Message to You, Cyclists 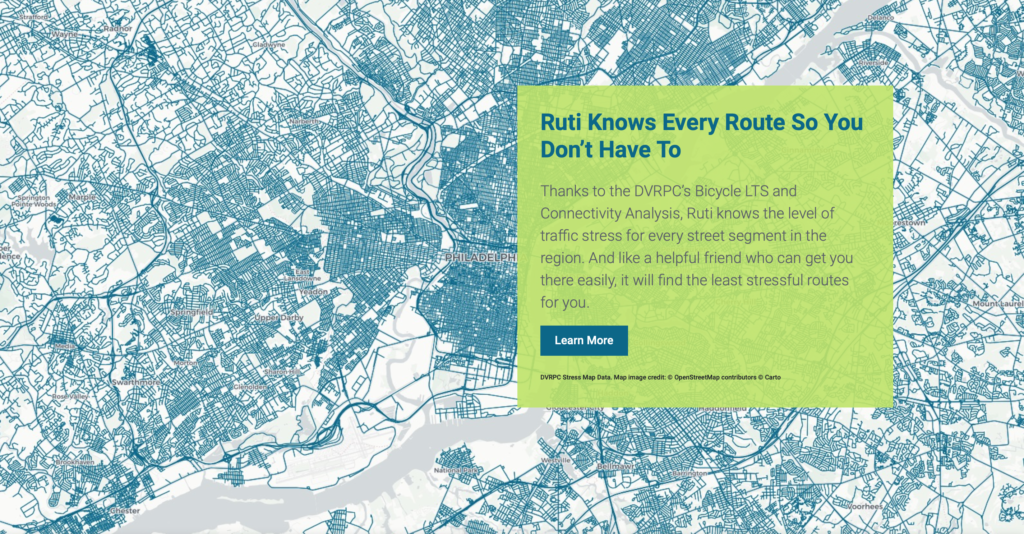 Included in that total were 85 pedestrians and 19 pedalcyclists, three of them younger than 18.

So far in 2021, New Jersey has already sustained one pedalcyclist death and 183 other fatalities, including 47 pedestrian deaths, in 177 separate motor vehicle crashes.

Given the intensity of roadway traffic for cyclists under even normal conditions, and the still-emerging nature of complete streets plans in many communities, bicycle riders generally welcome anything that eases the intensity of their commutes.

And that’s exactly what the developers of Ruti.bike are hoping their new planning tool will achieve. The text-message-based product helps bicyclists across the Greater Philadelphia metro area to find the least stressful ways to reach their destinations on the open road.

Ruti was created by the Delaware Valley Regional Planning Commission (DVRPC) in conjunction with developer Corey Acri of AG Strategic Design. It leverages DVRPC map and datasets and Acri’s work on the CyclePhilly app to put level-of-stress traffic analysis into a tool “that the average person can make sense of,” said DVRPC Senior Transportation Planner Cassidy Boulan.

“When people were riding more for recreation or looking for new activities for their family, we saw a lot of increased interest in low-stress routes—fewer cars, cars going slower —around the region,” Boulan said.

“We wanted to give people something where they can look up what routes are lower-stress for trips they want to take already,” she said.

LTS, or the Level of Traffic Stress, explainer. Credit: DVRPC.

“Level of Traffic Stress (LTS)” is a four-point road classification system based on an estimation of how comfortable any given street or corridor is for someone riding a bike to navigate. LTS scores range from a one (all ages and all abilities) to a four (only the bravest would attempt). Every road segment is scored, those scores are totaled, and LTS is calculated by balancing the length of each segment within the overall context of the trip.

Ruti compares recommended bike routes generated by the Google Routes API with the LTS maps produced by DVRPC, and then generates trip plans along a route it considers to be the least stressful, highlighting any high-stress segments of the route.

From the user perspective, cyclists register for the service, and then text “Hi Ruti” to engage with it. The service confirms their start and endpoints, and then produces step-by-step directions, a linkout to a map, and the option to get directions for a reverse trip. Ruti also uses DVRPC sidewalk inventory data to indicate where it may be possible to safely walk a bike, Boulan said.

“This kind of information allows cyclists to know ahead of time what their route will feel like, and make appropriate plans to navigate it,” Boulan said.

Ruti also prompts users to offer feedback on their trips as well as follow-up questions that can be used to refine its stress traffic analysis. The system launched last week, and developers are eager for real-world users to help them understand how it’s working. 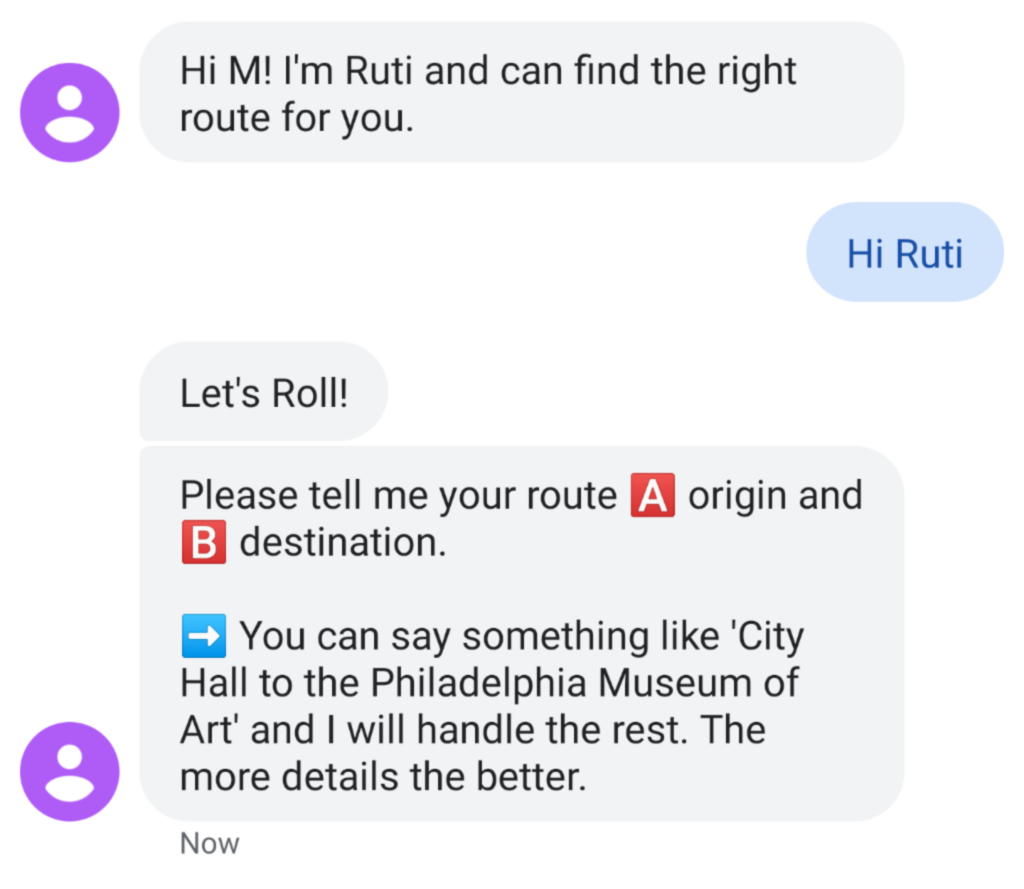 Sample of a text interaction with Ruti. Credit: NJ Pen.

“We’ll be evaluating, at different stages, if it’s achieving a level of success,” Boulan said.

“We don’t have a hard, exact number about what that is, but we certainly will be watching,” she said.

“We’ll see at the end of the summer where we’re at and what sort of adoption Ruti is getting.”

Future evolution of the project could include additional features like Spanish-language support, or a custom routing database that includes low-stress routes that might be “more out-of-the-way than Google would consider,” Boulan said.

Although Ruti helps cyclists to plan trips that keep them away from roads with a high volume of vehicle traffic, Boulan noted that the work of DVRPC to build bicyclist- and pedestrian-friendly roadways continues.

“One of the criticisms for Ruti is that yes, ultimately bikes and pedestrians need infrastructure,” she said. “We wholeheartedly agree with that, but as an agency that doesn’t own any roadway, we can’t stop our work.”