To many kids, the seasonal train ride is a novelty. To the grown-ups who volunteer, it’s a chance to be a kid again. 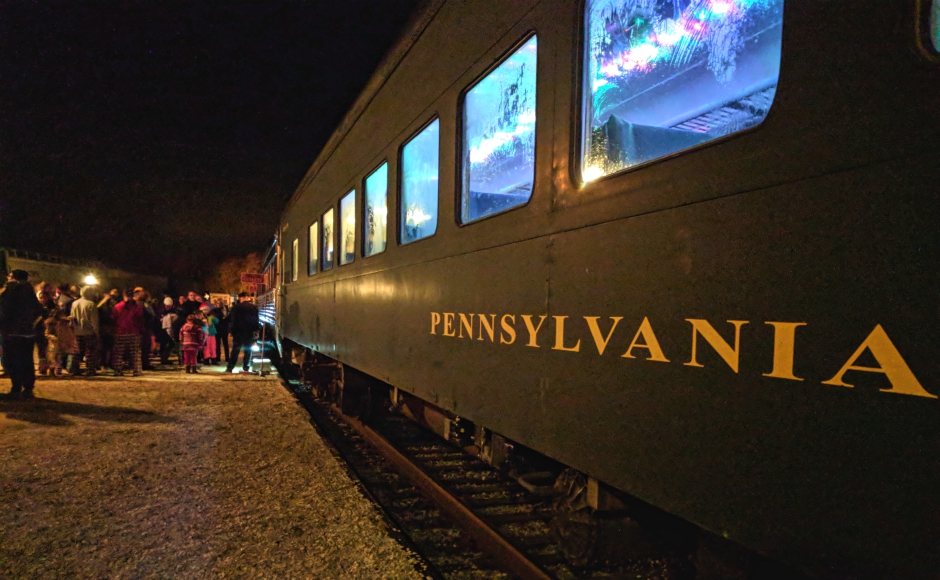 For some fans of Chris Van Allsburg’s The Polar Express, the Robert Zemeckis film adapted from his children’s book of the same name might be the closest they come to riding on a passenger train.

But for a few weeks every holiday season, operators of the Cape May Seashore Lines (CMSL) try to give them the real thing, converting a short leg of its freight railway into a recreational ride with vintage train cars.

With evening and daytime departures from its Tuckahoe and Richland stations through December 27, The Santa Express is largely powered by volunteer railway enthusiasts and holiday spirit. CMSL has hosted the rides for 22 years, and Paula Williamson of Haddon Township has worked as a ticket agent at the Tuckahoe station for 12 of them. 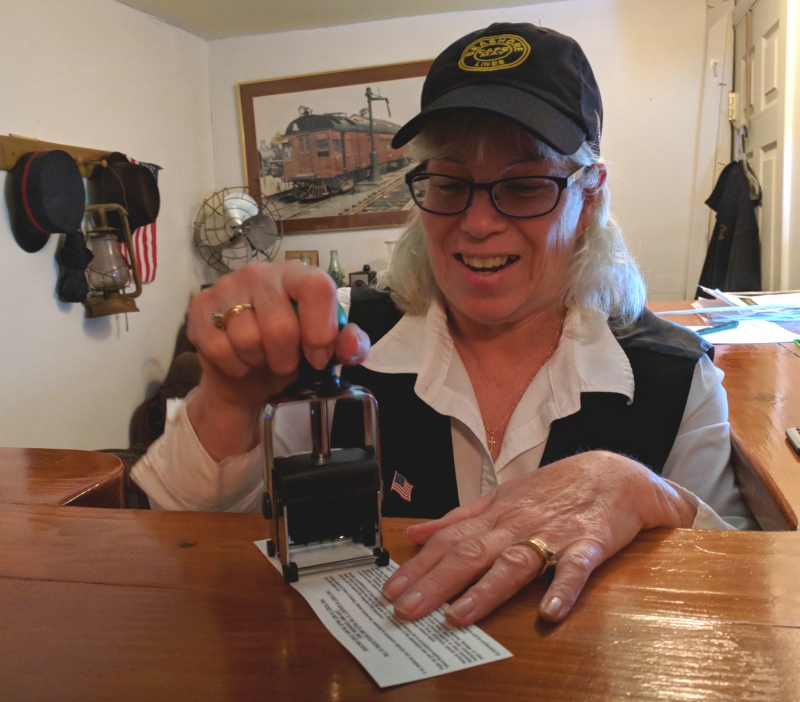 A member of the National Railway Historical Society, Williamson said there have always been trains under her Christmas tree.

But the Santa Express is special, Williamson said, because “everybody enjoys it so.

Ron Baile of Haddon Township has a similar feeling driving the 1968 diesel-electric engine at the head of The Santa Express.

Working as a volunteer engineer “is a child’s dream come true,” for the long-retired Verizon worker, but even the limited operations require “a lot of effort from a lot of people,” including some light freight work after the last passenger run, he said. 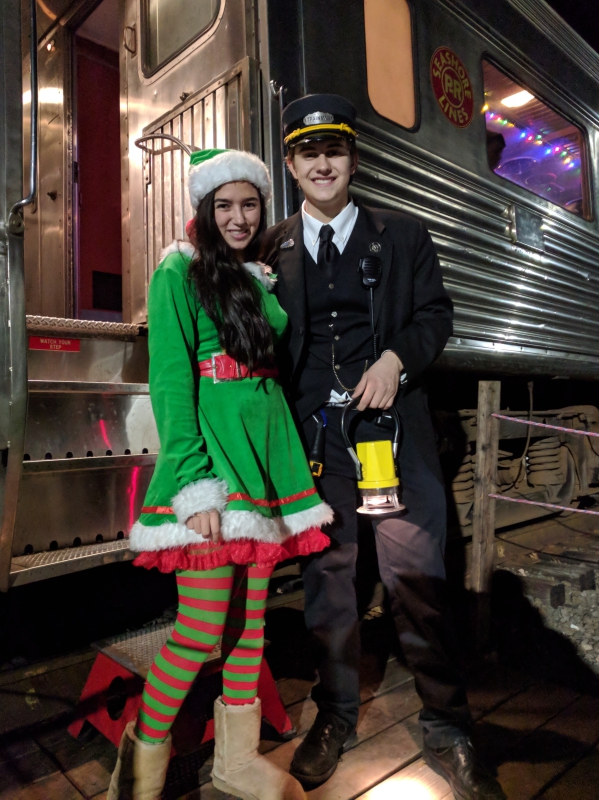 The 30-mile round-trip run from the Richland to Tuckahoe stations is about half-smooth, “the other half clickety-clack,” through “typical South Jersey pine and oak” forests, Baille said.

“You’ve got to learn your train every time you go out,” he said.

“Anyone can make it go; making it stop smoothly is the hard part.”

Santa’s helpers Gabriella DiMarco, 16, of Ocean City and Alex Chmelowitz, 17, of Mays Landing, haven’t worked the train service as long as Baille has, but said their experiences with the children onboard have created special, lasting memories.

When DiMarco met a four-year-old girl who was convinced that only elves and Santa could help her ailing cat recover from an illness, she deputized the child as an honorary elf to lift her spirits.

Once, he created a silhouette of an angel for a boy, and it turned out the child’s mom had died just a few weeks earlier. 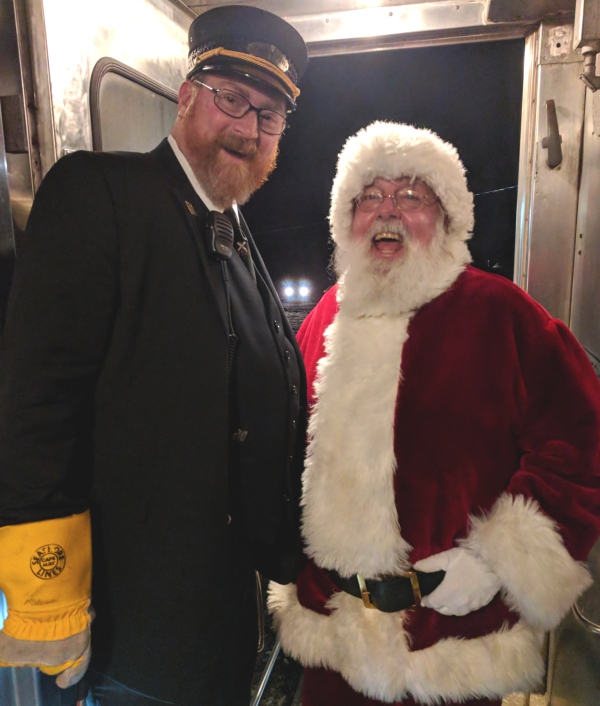 “He said, ‘How did you know?’” Chmelowitz said.

Moments like those are why Woodlynne native Paul Speas joined the Express three years ago as a Santa.

Speas, a retired Camden deputy fire chief and special education teacher, has played Santa since the 1980s, and said “instilling the spirit of Christmas in children and adults” is what it’s all about.

He travels throughout each car, taking a quiet, one-on-one moment with every child on the ride.

“I try to make it as real an experience as possible,” Speas said.

The Santa Express opens in Thanksgiving, but equipment maintenance and inspection starts in June, said Tony Macrie, President and General Manager of the Cape May Seashore Line.

For Macrie, who grew up in a generational railroad family, seeing kids enjoying the ride is the sole reason for it.

“What really gets to me is seeing children board the train, many of whom never rode a train before,” he said. “Up until 1981, this line used to run from Lindenwold to Ocean City, to Cape May.” 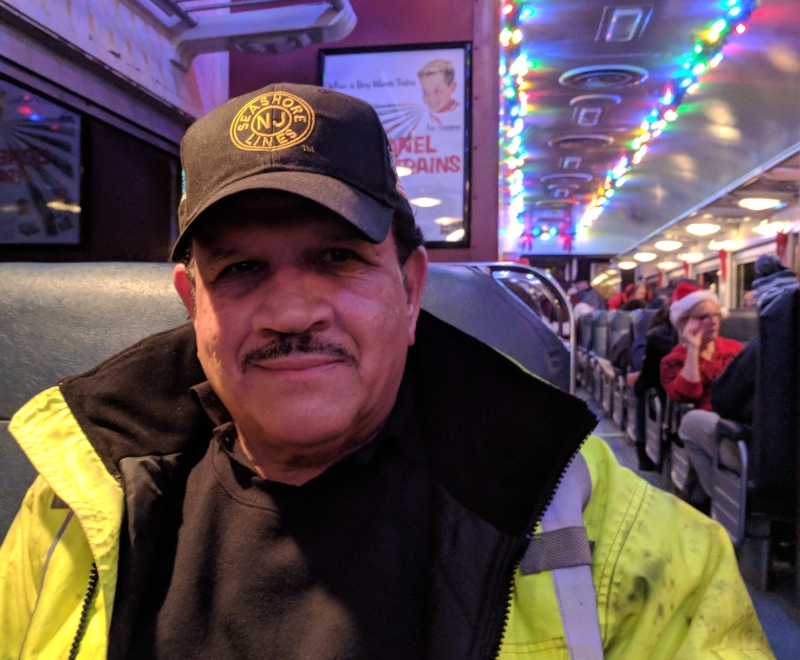 “The passenger business is a lot of fun,” agreed conductor Curt Hudson.

An Oaklyn volunteer firefighter, Hudson has been with the Santa Express since 2009.

He delights in giving children the full experience of train riding, including asking for their tickets with an air of sternness.

“You can tell they’re not prepared for this at all,” Hudson said, a twinkle in his eye.

“The whole thing is a show. We’re out here playing to what the kids’ expectations are.”

Joe, Brooke, and Milanna Pagliacetti of Washington Township were riding the Santa Express with Dale, Taryn, Jamie, and Colby Drayton of Atco.

The families said the train ride is one of their children’s favorites, and a chance for some low-stress holiday recreation. 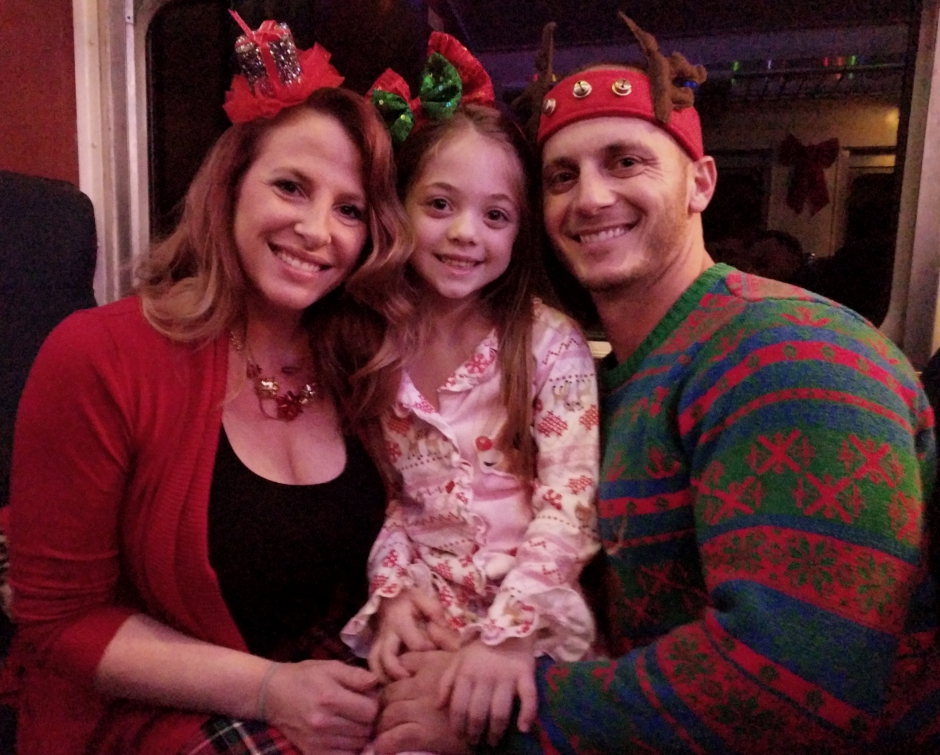 The Pagliacetti Family of Washington Township aboard The Santa Express. Credit: Matt Skoufalos.

“We hang out with friends,” said Joe Pagliacetti.

“We can wear our pajamas,” said Brooke Pagliacetti.

The Santa Express runs 10 more times before the end of the 2017 season.