Trending
You are at:Home»Arts»Science Fiction Theater 3000 Takes on ‘Hercules’ in Collingswood

For the third year in a row, members of the Collingswood Community Theatre have found their names attached to another terrible production.

This time, it’s the 1985 sci-fi/fantasy train wreck, The Adventures of Hercules; and, fortunately for them, members of the troupe have come not to praise the film, but to bury it. 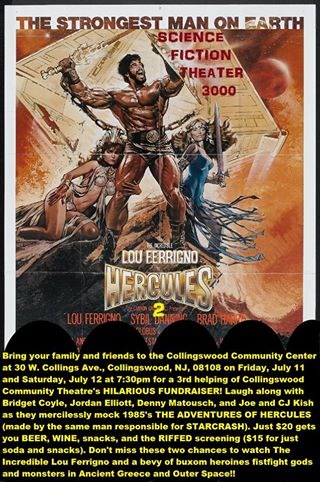 ‘The Adventures of Hercules’ is ripe for parody, and Collingswood performers will take it down this weekend at the Community Center. Credit: Collingswood Community Theatre.

In the tradition of the cable TV comedians that created the beloved-but-short-lived Mystery Science Theater 3000 (MST3K), the group will screen the film this weekend at the Collingswood Community Center, during which local actors will dismantle it with scripted wisecracks.

CJ Kish said the idea to do an MST3K-style comedy night occurred to him as “the natural step” in a town that already does live theater and outdoor movies.

Calling itself Science Fiction Theater 3000, the group has already tested the waters for this idea with its 2012 send-up of Starcrash, a foreign sci-fi film that sought to capitalize on the popularity of Star Wars, and last year’s Supergirl, to a positive response.

“We like to do different genres to keep it fresh,” Kish said. “It’s edgy enough to go over the kids’ heads, but the adults will get it. We try not to say anything overtly nasty.”

For the greater goof

The Adventures of Hercules stars bodybuilder Lou Ferrigno, and was written and directed by Luigi Cozzi, the same Italian B-movie cult figure behind Starcrash.

Cozzi also wrote and directed the 1983 Hercules movie (also starring Ferrigno), and a colorized re-release of GODZILLA that was released in 1977.

None of these works is known for the coherence of its plots, Kish notes.

“The storyline is that these rebellious gods have stolen Zeus’ seven mighty thunderbolts,” he said.

“He’s powerless without them, so he sends Hercules to retrieve them. They have hidden them inside these beasts and monsters so he has to fight these seven gods to get them back.”

But the camp quality of The Adventures of Hercules is exactly what makes it a prime candidate for mockery.

“I love making fun of movies,” Kish said. “To actually turn it into something that is performed to raise money is a great feeling for me—to use those mocking powers for good, in a sense.” 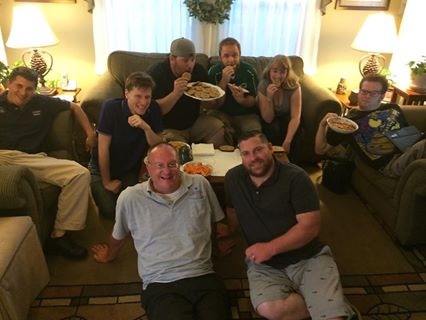 Collingswood Community Theatre actors prep for their live read of the gags written to accompany ‘The Adventures of Hercules’. Credit: CJ Kish.

The whole process is especially fun for Kish because he does much of the legwork on early drafts of the script with his father, Joe.

The two have developed a rapport as the co-creators of the performance, and after three years are honing their approach.

“We have a great time doing it because he and I are the ones who always watch the MST3K episodes over and over again,” CJ Kish said.

“Working with him is like working with another version of myself. We can tell which jokes are going to work and how much space to leave.”

Like the Kish’s, fans of MST3K—even some of the show’s former cast members—retail downloadable versions of their own spoofs on a site called RiffTrax.

The opportunity to take in a live performance, however, is something for which he thinks the area has an appetite.

“Even though the show has ended, I know there’s still a huge fan base and a huge following in this area,” CJ Kish said. “We see it as a way for people to enjoy that.”

Admission is $10; a $20 ticket also covers “all the beer and wine you need to deal with the movie,” CJ Kish said. All funds raised support the Collingswood Community Theatre.