Three years and hundreds of thousands of dollars in the making, the startup business aims to capture growing interest in the esports industry by facilitating school gaming teams and multiplayer VR lounges. 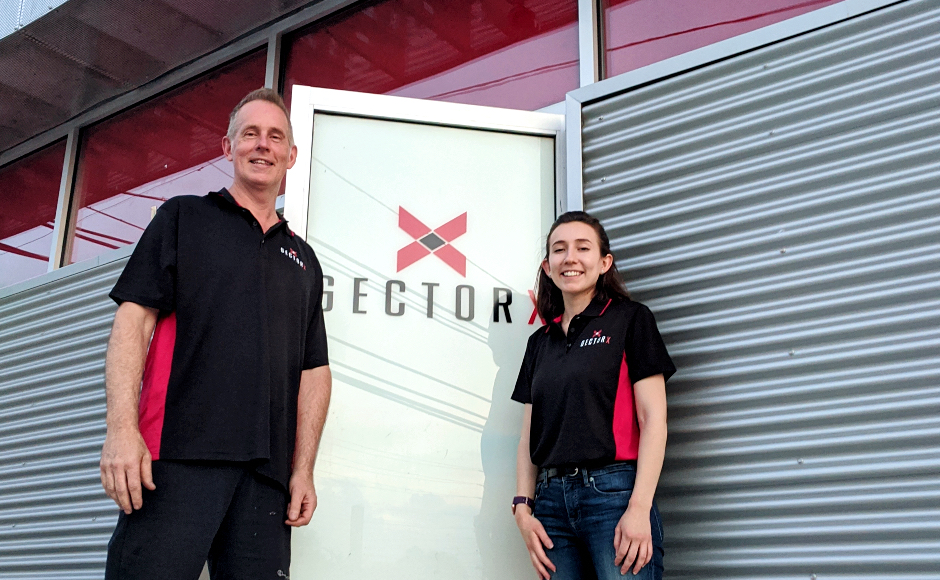 On approach, the former home of Magnus Computers in Cherry Hill may not look too different to those familiar with the hulking, concrete office building at 2101 Marlton Pike West.

Its familiar blue stripe has been retooled in a bright red, the parking lot is freshly paved, and a newly added elevator helps make property more accessible to those with mobility issues.

Stepping through the frosted glass doors, however, visitors are immediately transported into a facility that’s an entirely different computer-based business, one designed to provide a cutting-edge gaming experience for players of all ages.

Sector X, a name that Marketing Officer Dave Girgenti said was born in homage to sci-fi serials and Homer Simpson’s workplace, aims to be the first esports arena in Camden County; a destination for competitive gamers and those interested in virtual reality (VR) arcade simulators.

Conceptually, Sector X was founded as a drone racing enterprise, but the associated costs and complications of establishing that business—starting with 20,000 to 30,000 square-feet of isolated warehouse space—became too great to get off the ground. Pivoting to virtual and augmented reality (AR) games offered a shorter time to market and a lower barrier to entry.

It also afforded a natural opportunity to participate in the burgeoning esports market, which is projected to approach $1.8 billion globally next year, according to Business Insider.

The first-floor local area network (LAN) esports lounge at Sector X is designed to measure up to those high-performance expectations right from the jump.

Adding to the atmospherics, the cases that house the machines are outfitted with red LEDs that match the Sector X building décor, and tie into its custom-fabricated, wall-mounted visual displays.

“We made it really techy, really hip,” Girgenti said. 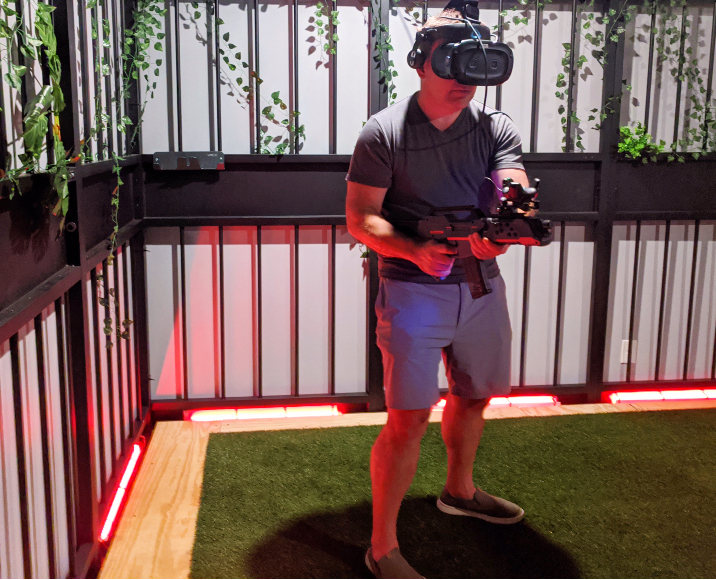 In addition to hosting esports competitions, the first floor of Sector X is available for corporate training and private events, supported by an in-house snack bar and outdoor patio area.

Players can hop in a virtual Formula 1 car and get the feel of zipping across international race tracks, or ride rollercoasters on the VR Slide, a sleek, black simulator that looks like a cross between a changing station and a piece of statuary.

Players can also try out handheld simulator games like Space Pirate Trainer and Beat Saber, as well as a multiplayer, VR dinosaur hunting experience, complete with haptic vests that vibrate when they take a hit, and a planned treadmill floor that allows roaming within even more immersive environments.

“We’re making Ready Player One,” Girgenti said. “As the T. Rex walks near you, you’ll feel the vibration coming through the floor: you feel it, you see it, and you interact with it.”

Virtual reality technology is becoming more available to home users, but they don’t all have room sufficient to play safely at home, or the capacity to add another player into the gameplay, Girgenti said.

“[We’ve got]  haptic vests, impact floors; things you can do here that you can’t do anywhere else,” he said. “Why do you go to Disney World?” 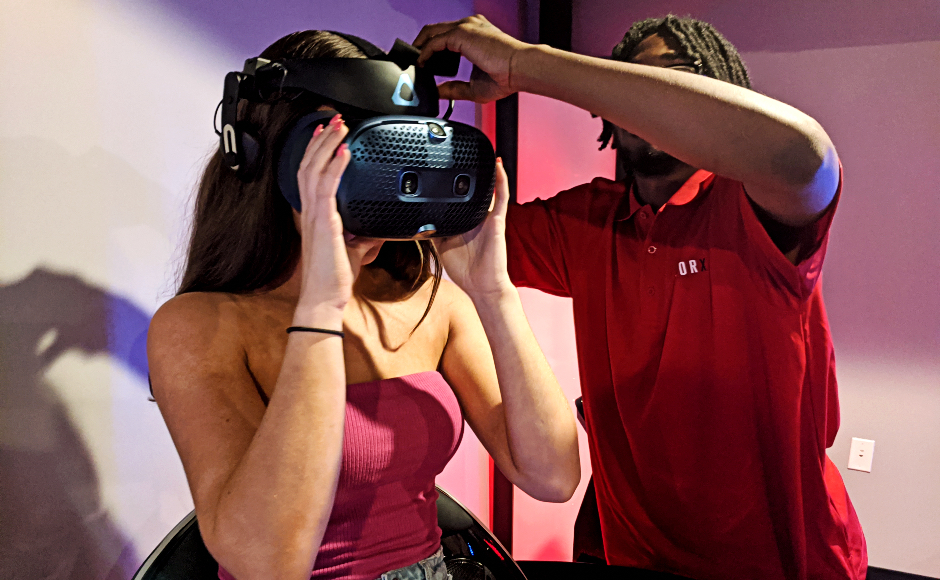 The Cherry Hill facility is intended as the flagship Sector X location; Girgenti said the brand intends to produce spinoff franchises as well as “a large stadium version” of the business, with a competition-quality experience.

“We’re like a party center,” Girgenti said; “we’re trying to compete with a Top Golf or a Dave and Buster’s.”

The ultimate goal of the facility, however, is to attract high-school and collegiate esports teams.

“We want to sign up 18 high schools and create a league to host tournaments,” said Sector X CEO Vic Stott of Lumberton.

Stott, who got his start in the audio-visual business, believes that Sector X could be a conduit to help young gamers learn professional skills that can enhance their on-camera presence, particularly when livestreaming their gameplay.

That’s another selling point for some of the partnerships he hopes to establish with public schools throughout South Jersey as they grow their esports clubs and teams.

“I want to see community aspect come back: esports scholarships, building custom arenas for schools, teaching how to set up AV equipment, and presence in front of the camera—that’s the things that are going to set us apart,” Stott said. 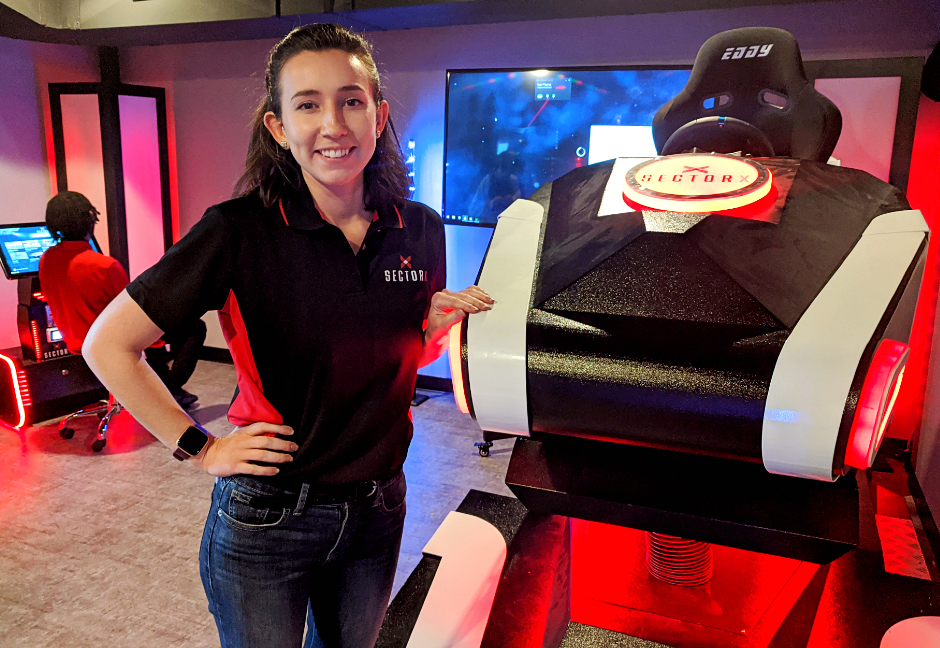 The business also has the potential to develop its own branded games: its in-house team is currently developing a Halloween-themed simulator that Stott hopes will be ready to roll out by the fall.

“We’re using the games that are out there now, but our end goal is to create our own,” he said.

“I want to build a brand; I want to create something.”

Heather Stott, Vic’s daughter, who is the GM and President of the business, believes “there’s a big market” for what Sector X offers, and she foresees a place for it within the broader context of experiential retail and amusements.

“People want something to do on a Friday or Saturday,” she said. “It’s something new for people to get out and enjoy.”

“Whether it’s axe-throwing or bouncing on a trampoline, people just need something to do,” Vic Stott said. “I think there’s enough business for everybody.”