Trending
You are at:Home»People»‘See Me Flags’ Highlight Pedestrian Safety Concerns Along Haddon Avenue

The pedestrian flags are a low-cost intervention to help people crossing the street in the Haddon Township business district feel safer. Critics say more wholesale changes are necessary to slow vehicle traffic there. 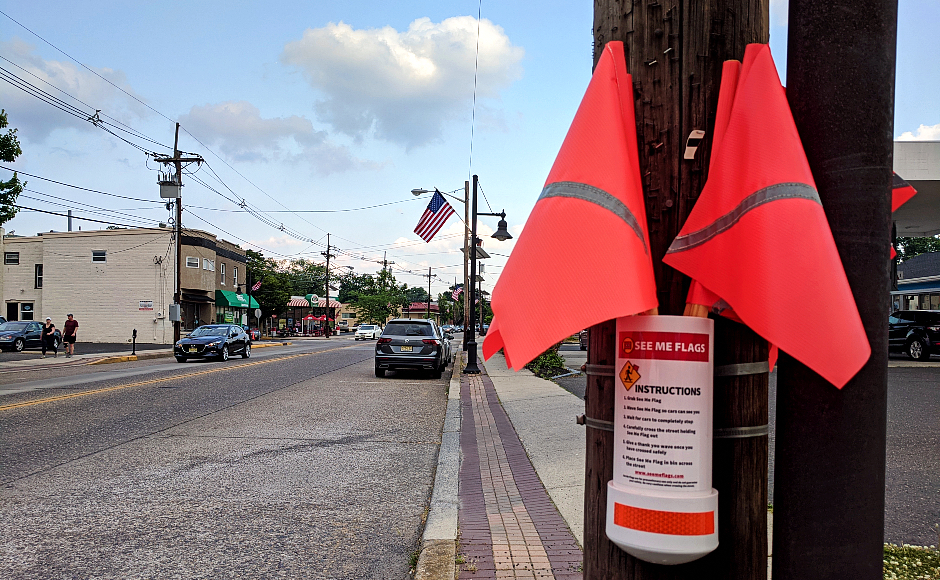 If you’re traveling on foot through the Haddon Township downtown business district, you might notice a small canister of flags fastened to a pair of utility poles at Haddon and Albertson Avenues.

Entitled “See Me Flags,” they were placed there to be used by pedestrians crossing from one side of Haddon Avenue to the other.

Kate Burns, who directs the Haddon Township Business Improvement District (BID), said she first saw the flags on a visit to Virginia, where Arlington marketing executive Grant Yoder launched the concept in an effort to draw attention to children crossing a busy street near his community pool.

The concept took root decades ago in communities like Kirkland, Washington, and Burns pitched it to the Haddon Township mayor and police department as an idea that might work here.

Her initial explorations seemed promising: two weeks ago Saturday, Burns said she crossed Haddon Avenue, waving one of the flags, and found that drivers took more notice of her in the crosswalk.

“Cars stopped because they thought I was someone official,” she said. “I put it there because of its proximity to Haddon Square, and thought maybe it would be easy for us to demonstrate how to use it at an event.”

Burns said her idea was to try out an inexpensive strategy to improve pedestrian safety crossing Haddon Avenue, which can be challenging given its high volume of daily vehicle traffic. As people begin to congregate more, and businesses reopen during the end stages of the novel coronavirus (COVID-19) pandemic, foot traffic there will only increase—along with the risks of injury to walkers and cyclists.

“There are people walking to events up and down Haddon Avenue, and it’s not just here in Haddon Township,” Burns said. “We were trying something to see if a small program like this would get through to people. We’re all pedestrians at one time or another.” 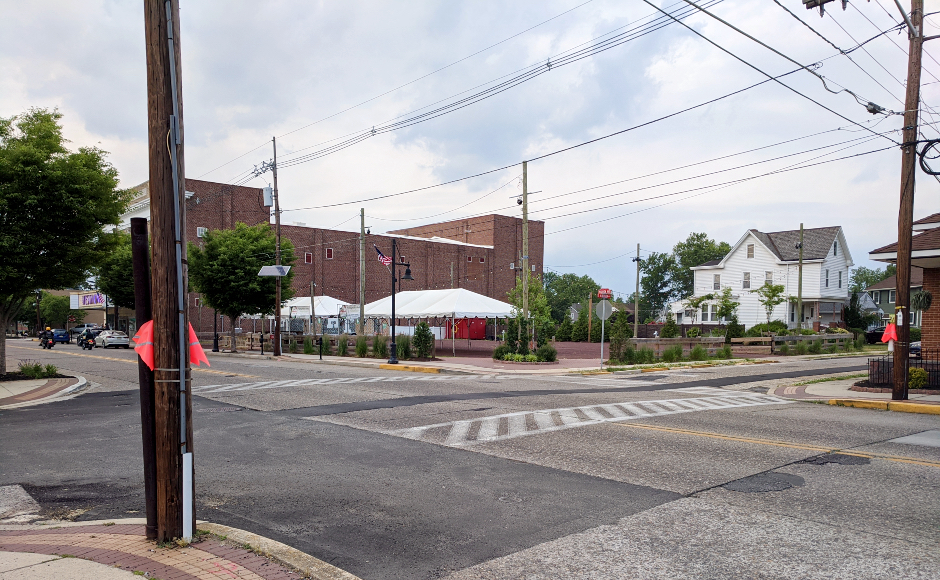 ‘You need to invest in slowing traffic’

The See Me Flag pilot launched without any public-facing announcement, however, and for some who encountered it without explanation or introduction, it raised a handful of critiques.

Collingswood resident Devin Turner said he appreciated the effort, but worried that the concept puts too much responsibility for safe crossings on pedestrians and not drivers.

Turner is a founding member of South Jersey Urbanists, a community group focused on pedestrian safety and walkable, transit-oriented development.

“It’s a question of how we’re perceiving pedestrians through this whole interaction,” Turner said. “Generally, we hear from drivers saying they appreciate this, not that pedestrians find it useful and would use it themselves.

“I appreciate the low-cost solution, but it represents an attempt to offload safety in the street to pedestrians and not everyone,” he said.

In many instances, using a flag hasn’t stopped drivers from striking pedestrians with their cars.

A 2014 Bloomberg City Lab story said that flag programs remain popular despite no evidence that they limit pedestrian deaths as much as improving roadway design does. Its author, Sarah Goodyear, concluded that “expecting people to carry flags so they can cross without getting killed… only increases the sense that being a person on foot is somehow weird or embarrassing.”

And in Provo, Utah, artist Susan Krueger-Barber even filmed herself crossing the street with a hand-sewn flag the size of a blanket, and drivers still failed to stop for her in the crosswalk.

“Putting in flags isn’t enough if you really want to start talking about improving pedestrian safety,” Turner said. “You need to invest in slowing traffic; in tightening roads in order to giving people comfortable spaces [to cross].” 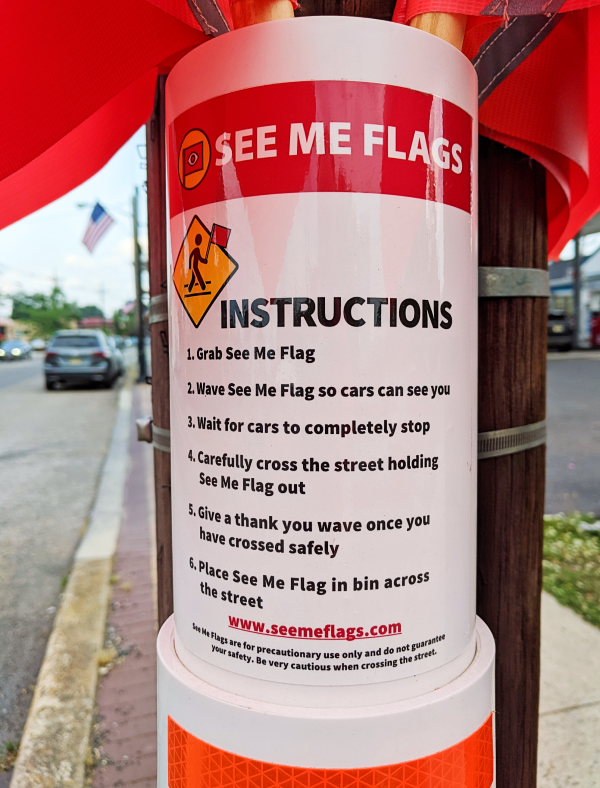 The Haddon Township municipal government could also enact a Complete Streets plan, a transportation design policy that requires roadways to be designed for users of all ages, abilities, and modes of transit.

Turner also pointed out that the specific intersection where the flags were installed in Haddon Township features an incomplete crosswalk that appears to have been a casualty of utility repairs.

“If we’re going to talk about anything at this particular intersection, painting the entire crosswalk would be a good start,” he said.

“I completely agree with the sentiment and the good intentions there.

“The major issue is they haven’t done a good job on keeping the crosswalk up to date,” Turner said.

While supporting the intentions behind what he described as “a small, tactical measure,” Haddon Township Commissioner Ryan Linhart shared Turner’s concerns with the See Me flags.

“My only concern is that it might give people a false sense of security, when they should just be using their heads when crossing the street,” Linhart said.

“When it comes to street design, that also plays a big role, and that’s where we need to focus our energy,” he said. “The idea is to indicate to drivers, pedestrians, and cyclists that this is a shared space.”

Linhart envisions the township implementing measures that are “more structural,” from signage and road striping to wider crosswalks. Haddon Township is working towards “a broader plan” for such work, and the commissioner noted that the municipal government has budget to do so.

He also said that road crews will complete the crosswalk striping at Haddon and Albertson once the road resurfacing work there is finished. 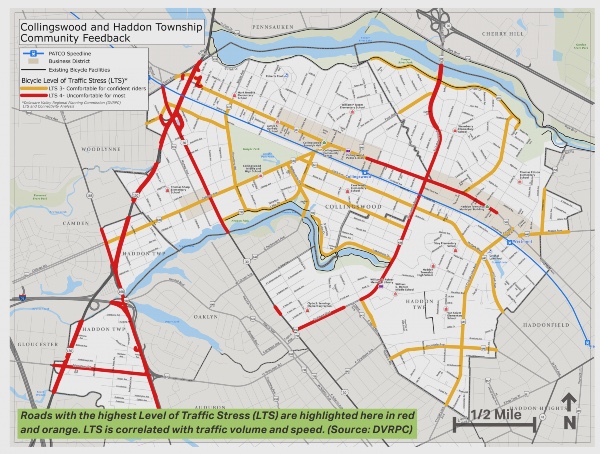 From low-hanging fruit to long-term planning

Making wholesale streetscape changes to a busy county road like Haddon Avenue takes time, money, and authorization from a variety of parties, and there are a number of barriers to doing so.

“That’s the whole purpose of doing a plan,” Kelly said. “Once you have a plan that’s endorsed by the regional transportation management stakeholders, they want to see the plans that they fund come to fruition with infrastructure and capital investment.

“With that said, we need more money, and there’s a lot of towns vying for this money,” she said.

In the meantime, communities should try to tackle “low-hanging fruit” in areas of driver and pedestrian education, Kelly said.

“Everyone should know what the laws are and how to keep themselves safe,” she said. “That doesn’t mean we’re putting the onus on pedestrians.

“We can have great crosswalks; we have to figure out strategies to slow the traffic down.”

Some of those concepts will be on display in July as part of the Delaware Valley Regional Planning Commission (DVRPC) experimental pop-up program. Connect 2020 organizers will add some temporary bicycle infrastructure along Atlantic Avenue, from Collings to Irwin Avenues, to get user feedback on how those solutions work in real-time.

“When we were doing the study, someone made the comment that they felt safer in Philadelphia because Philadelphia drivers are more accustomed to looking for pedestrians,” Kelly said.

“We have suburban communities where people aren’t accustomed to looking for pedestrians as our pedestrian population has been growing,” she said. “We have to slow these cars down, and that’s what these interventions do.”