Trending
You are at:Home»Business»‘Soon to be 95, Time to Retire,’ Says Haddonfield Cobbler

Quaker Shoe Repair owner James Spinelli will lay down his tools for the first time in 84 years September 1.

It’s only as Haddonfield cobbler James Spinelli approaches his 100th birthday that he’s acknowledging the possibility of taking a break from his life’s work.

“Soon to be 95 years of age, time to retire,” reads a handwritten sign in the window of Quaker Shoe Repair, the Tanner Street business that’s been his home and workplace for decades.

“84 years of shoe service + 74 years of being in business,” it continues.“Thank you, James David Spinelli.” 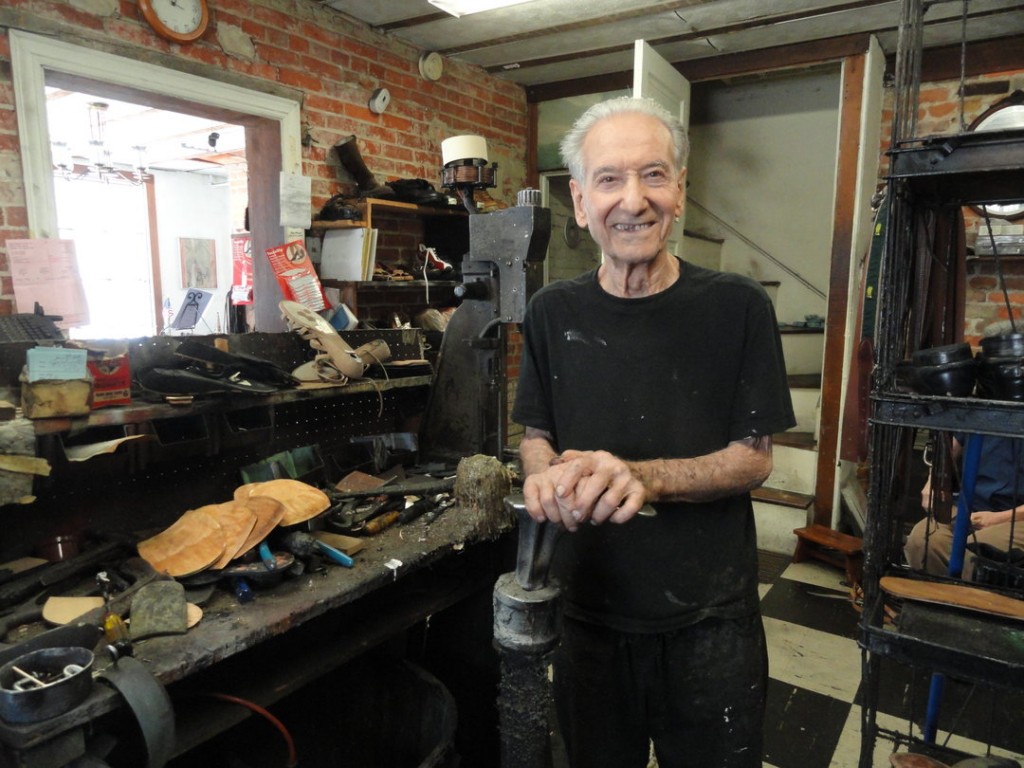 ‘I always felt like a servant to the public’

“I say soon because it’s a short time for me,” said Spinelli, whose working days begin at 7 a.m. and continue for the next 13 hours.

His birthday isn’t until January 25, but only a year ago at that time, the tradesman was giving interviews in which he deemed retirement a distant possibility.

Saturday is the final day on which Spinelli will be taking new items for repair so that he can fully retire September 1.

Although he admits that “over three-quarters of a century is enough,” Spinelli said he’s “a little hesitant” of retirement because he still would prefer to work.

“Once you’re into a business or a trade of any kind because of the necessity of working, you become very much attached,” he said.

“I never felt like a businessman. I always felt a servant to the public for their shoe needs.” 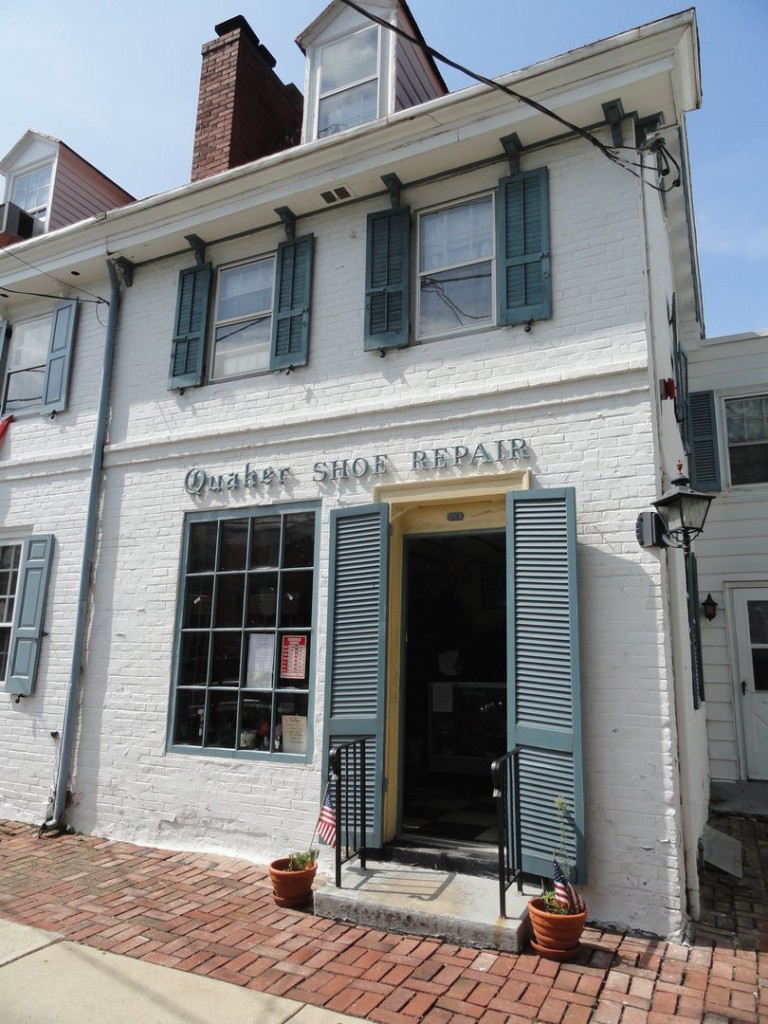 The Quaker She Repair building in which Spinelli has worked and lived for years. Credit: Matt Skoufalos.

‘Mother and Dad didn’t have much of anything’

Work has been a part of Spinelli’s life since the age of 11, when he was a Depression-Era kid growing up in Camden City. On the way home from a basketball game at the YMCA, he and a few friends passed by a shoe shop on Broadway and were offered jobs.

His wages were $1.50 per week, but as Spinelli recalls, “a penny and a nickel was a big deal to me because Mother and Dad didn’t have much of anything.”

When he was 14, Spinelli said the owner told him he’d “messed up a pair of shoes” and owed the shop $22 for his error. The only thing he could think to do was leave town.

“Mother didn’t have that kind of money,” he said. “I was running away from home with thirty-two cents in my pocket.”

Spinelli headed over the Ben Franklin Bridge to what he thought was the end of the road, and spotted a shoe shop at Market and 69th Street. The manager there told him, “Go back to school,” but on his way out the door, another cobbler directed Spinelli to the nearby Quaker Shoe Repair.

He worked there for five years, honing his craft for customers that included the Pennsylvania Ballet, until the owner, with whom he’d grown close enough to be included on family vacations, passed on. 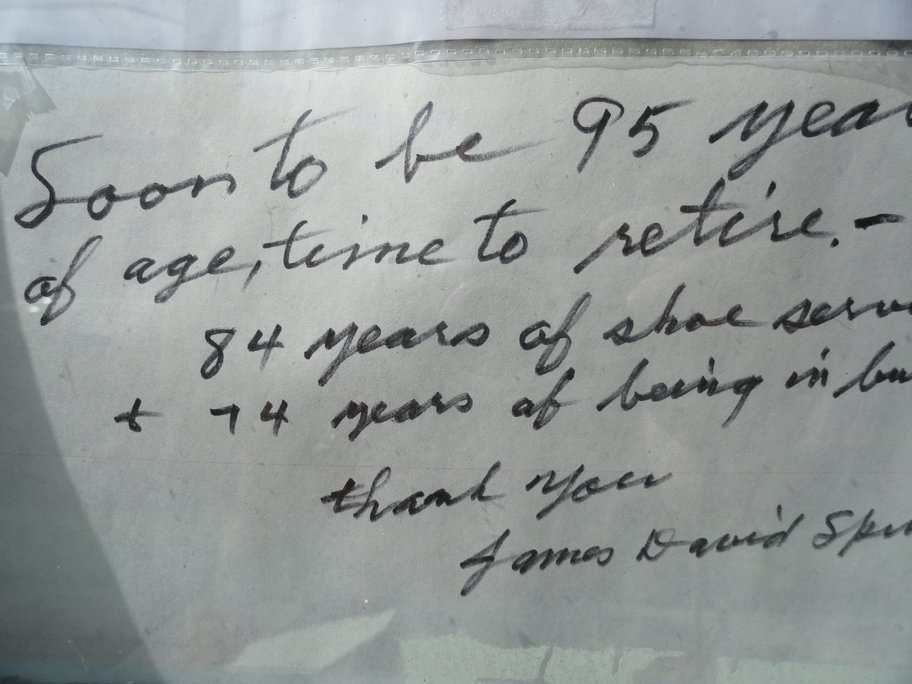 The handwritten farewell note from Spinelli that hangs in the window of Quaker Shoe Repair. Credit: Matt Skoufalos.

‘Do good, and good will come to you’

By then it was 1939. With a $500 loan from his father-in-law, Spinelli bought a partnership in a shoe shop at the intersection of Stratford and Haddon Avenues in Westmont.

The cash went to the United Shoe Machinery Corporation, which rented the cobblers their gear. Spinelli later bought the building for $1,200, and moved the business to its current location on Tanner Street in Haddonfield after that.

When Spinelli retires, he’s not sure what will become of the place. After a lifetime working, he’s not even sure what he’ll do himself, but don’t expect him to complicate things too much.

“I don’t reach out for happiness,” he said. “I feel the happiness is within the contentment with yourself in your daily living.

“Mother often said, ‘Do good, and good will come to you.’”

Spinelli spends Sunday afternoons visiting the grave of his first wife, who died in 1945. He enjoys opera and classical music; otherwise, he has no hobbies. He believes his greatest achievement to be his five children, and that they are all still on fine terms with one another.

When asked what he will remember most about his time in business, Spinelli spoke of treating his customers “like kin.