Twelve-year-old Layla Newton of Haddon Township and nine-year-old Peyton Brining of Mount Ephraim will compete on an international stage under the guidance of their Collingswood trainer, Eddy Torres.

For 10 days in March 2020, two of South Jersey’s finest martial artists will travel nearly 9,000 miles to the city of Pattaya, Thailand to compete in one of the biggest tournaments in their sport.

Now the girls and their families are trying to raise enough money to cover the cost of traveling to the competition with their trainer, Eddy Torres of Collingswood’s Team Taino Martial Arts & Fitness.

Both are decorated fighters for their ages, with championship belts and medals to their names, but Thailand will present the toughest test they’ve yet to see.

“They’re going to be the youngest girls to compete,” Torres said. “There’s going to be competitors from countries where they have to fight for money to eat. These girls are not coming out to play with them.”

To prepare, Newton and Brining train three to four hours a day, five to six days a week. On school days, they spend an hour on personal training, and then alternate among jiu-jitsu and muay thai classes. Torres supplements those efforts with conditioning stints, weight training, technique, and speed coaching.

He also handicaps Newton and Brining against larger and older fighters to compensate against their opponents’ potential advantages in height, weight, and skill. His philosophy is “make it hard in here so it’s easy out there.”

Brining has internalized the message. 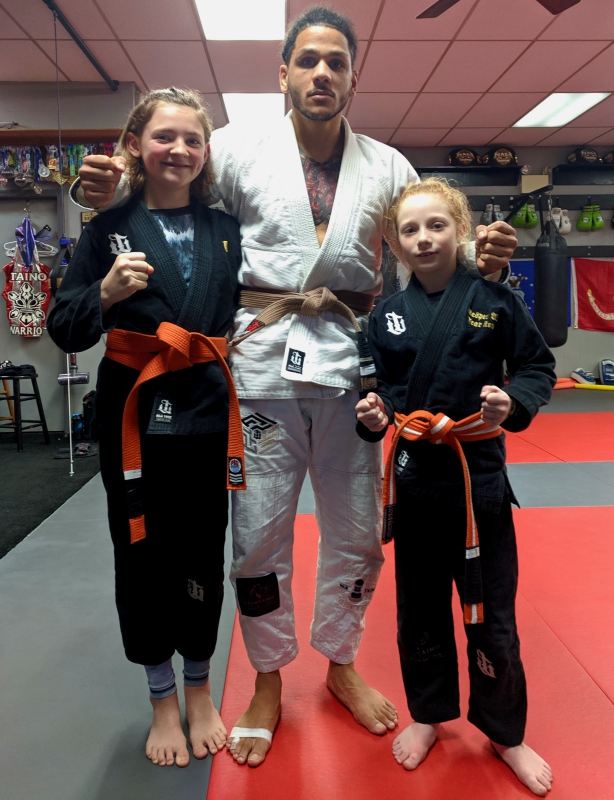 “These girls [in Thailand]  are like us,” she said.

“They’re training just as hard as us, so it’s a matter of how we put our work in, and if we win it here.”

Newton has discovered the limits of her perseverance just to come as far as she already has.

She almost gave up the sport after a year, but Torres convinced her that if she stuck with it, she would win.

That was four years and several victories ago.

“Now I want to be here every day,” she said.

“The first time that I took her to the gym, she wanted to get on the mats right away,” he said. “She didn’t want to wait for me to sign her up. She just took to it. She really enjoys it.”

Both girls cite UFC fighter Rhonda Rousey as their inspiration to take up the sport; Newton also likes boxer Amanda Serrano. But it’s Torres, their coach, who’s had the biggest impact on their outlook.

The former bouncer preaches discipline at school, at home, and in the dojo. For those who step out of line, a few sets of burpees quickly brings things back into focus. More than motivating through punishment, however, Torres simply doesn’t leave his students with any option to disobey; he just exhausts them.

That’s the mentality of a fighter raised by fighters; an uncle and mother who were both professional boxers, and a father who was a tai kwon do sensei. Torres still fights professionally in the Cage Fury Fighting Championships, a regional mixed martial arts league, and brings the lessons of those experiences to the dojo. 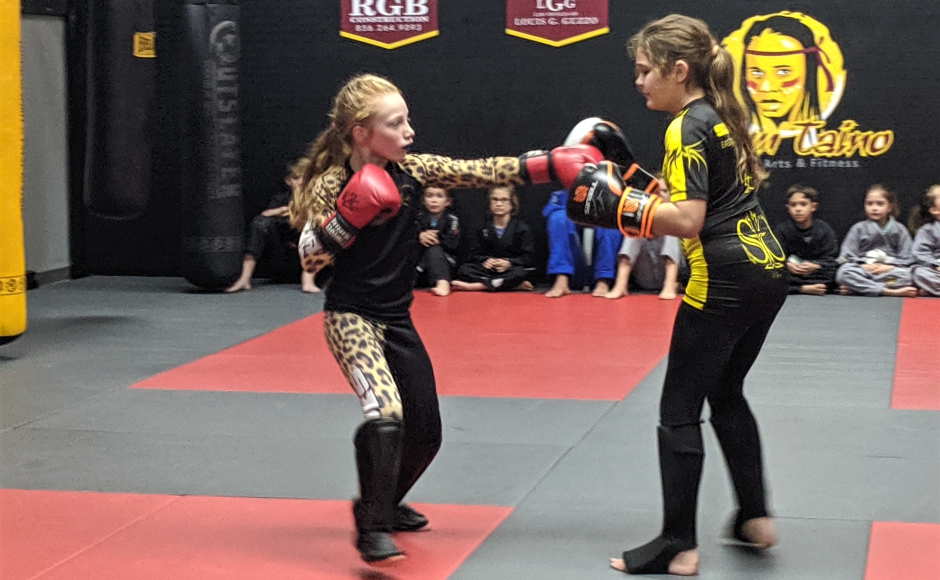 Torres is quicker to praise his students for a hard-fought loss than for an easy victory.

He emphasizes humility—in the Arawak language of native Puerto Ricans, “taino” translates to “we are humble”—and effort.

Perhaps most importantly, Torres teaches his students that it’s okay to be nervous when they step into the ring.

“It takes courage to even fight,” he said. “Before a fight, I’m always scared. I don’t care what nobody says. It’s a weird feeling. You don’t know what that other person is capable of doing.”

Brining has internalized that message. Despite her uncanny confidence on the mat, she’s described the challenge Thailand presents as “nerve-wracking.” Her solution is to dedicate herself to her process.

“When you’re fighting, it’s like, no mistakes; not many,” Brining said. “If you make mistakes, then they have time to counter. Then the more time it takes to get it right, they can have an opportunity. Here I block it all out.”

Newton described a similar feeling when she steps into the ring.

“At first I’m nervous, and then once it starts, I have fun and just do what Coach Eddy tells me to do,” she said.

“They are hard workers, no matter what,” Torres said of the girls. “It’s not like anything was given to them. Every day they work their butts off. They don’t have to.

“They’re smart girls,” he continued. “They could be great at math, but they can do this, too. They could be world champions.

“In my eyes, they already are,” he said.

To help raise money for the estimated $6,000 cost of their trip, the families will host a beef-and-beer at the White Horse Pub and Oak Bar from 3 to 7 p.m. Saturday, November 23. Those who can’t make the event can also support their cause on GoFundMe.