Trending
You are at:Home»People»South Jersey Women’s Group Marches for Peace in Collingswood

Formed in the wake of the U.S. presidential election and organized rapidly over social media, the South Jersey Women for Progressive Change took a message of peace to the streets Friday night. 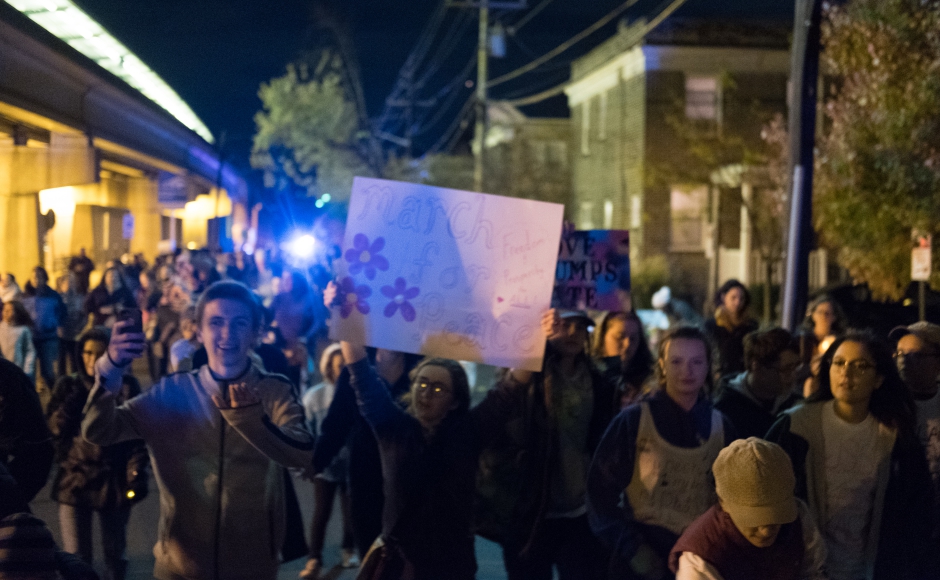 With the results of the U.S. presidential election still just a few days old, civic protests and demonstrations illustrating a national divide over the results have been held nightly from California to Connecticut.

As reported by CNN, they have varied in intensity, from Portland, Oregon where one man was shot, to Iowa City, Iowa, where marchers blocked highway traffic.

In Collingswood, a few hundred families took to the streets on Friday evening—calmly, and in large part, quietly—carrying homemade signs and luminaries.

Coordinated by the grassroots South Jersey Women for Progressive Change (SJWPC), the event was dedicated to social justice and the public representation of women’s issues, SJWPC co-founder Amanda Cohen said.

“It’s important to me to help spread the message of peace and unity throughout this community,” Cohen said. “I want to be part of a movement in which women empower each other to fight against sexism, bigotry and hatred.”

The group was formed swiftly after the election returns came in, and its numbers had ballooned to more than 1,500 by the end of the week. Its page invites “female South Jersey resident(s)” to help “make a transformative impact on the lives of women in a Trump America.”

“Let’s be the evidence that women are real agents of change and progress and that we won’t be diminished—not now, not EVER,” its statement implores. 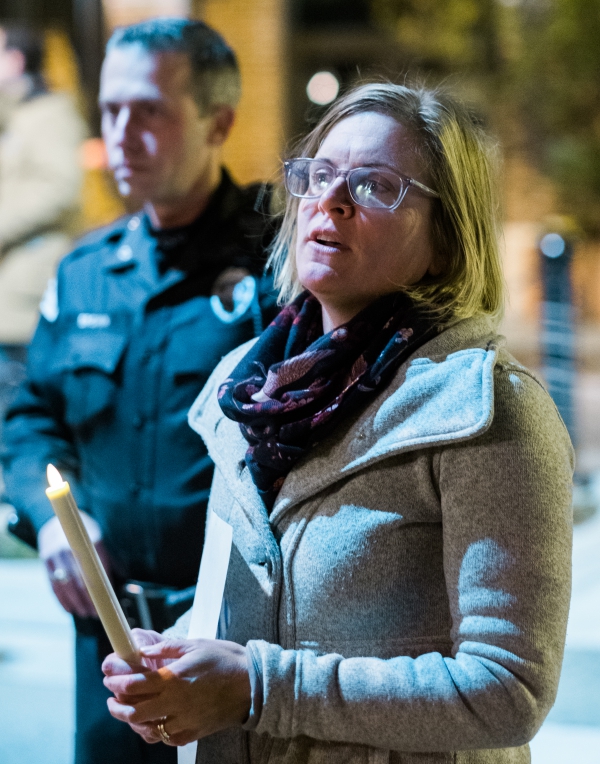 Although their rhetoric advocates transformation, change, and action, the group hasn’t yet produced a clear platform or agenda.

Friday’s rally was designed as a peace march, not a protest march, Cohen said, and was flanked and preceded by a Collingswood police escort.

The borough is no stranger to social justice causes, having held a pair of rallies this summer—first, a vigil for victims of the Orlando nightclub massacre, and a second for law enforcement in the wake of the Dallas police shootings.

“When you get a big group of people that want to express themselves that way, it’s our job to try to oblige it,” said Collingswood Mayor Jim Maley.

“They’re a group of people who just felt the need to gather as a community.”

Organizers tried to keep their event nonpartisan, Maley said, adding that the 40-minute march had a minimal impact on the downtown shopping and dining district on a Friday evening. The biggest goal of the event, as he saw it, was for participants to make space for their civil rights.

“I’m a firm believer that all politics are local,” he said. “All the concerns of the people last night are just to make sure that there’s not any groups of people that are hurt.”

All six of Friday’s event organizers are residents of Collingswood, where slightly less than 70 percent of the local population participated in the past election, favoring Hillary Clinton over president-elect Donald Trump, 5,113 to 1,698. Similar margins held throughout the reliably blue Camden County precincts, with 142,375 voters casting ballots for Clinton versus 71,020 for Trump. 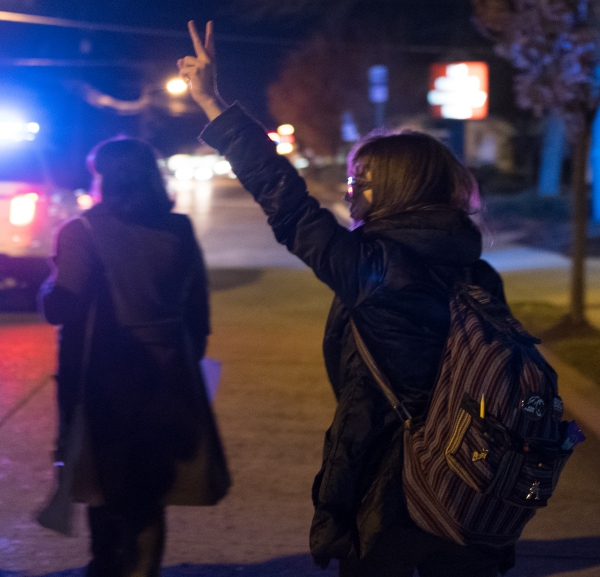 A protester throws up a peace sign in Collingswood. Credit: Tricia Burrough.

Turnout county-wide was robust, with some 225,000 (nearly 65 percent) of eligible voters hitting the polls.

“You don’t have to go far to see the differences [in political perspectives],” Maley said.

Parents walked beside children, and although the group is led and organized around women’s issues, men were visible participants in numbers.

Cohen describes herself as a politically active liberal “from a long of staunch democrats”; she has previously organized events in Collingswood, including a lactation rally for breastfeeding women at the borough farmers market. Confessing “a tremendous sense of grief and hopelessness on Wednesday morning,” Cohen said the impulse to organize seemed a better choice than “basking in anger and sadness” at the results of the polls.

“I think millions of American women woke up on Wednesday morning with a tremendous sense of guilt that we didn’t fight hard enough,” she said. “For so many of us, this election was a sobering reminder that half of this country doesn’t share our values and ideals. Social change requires action, and I’m hoping this group will be a springboard for women to get more engaged in civic causes.” 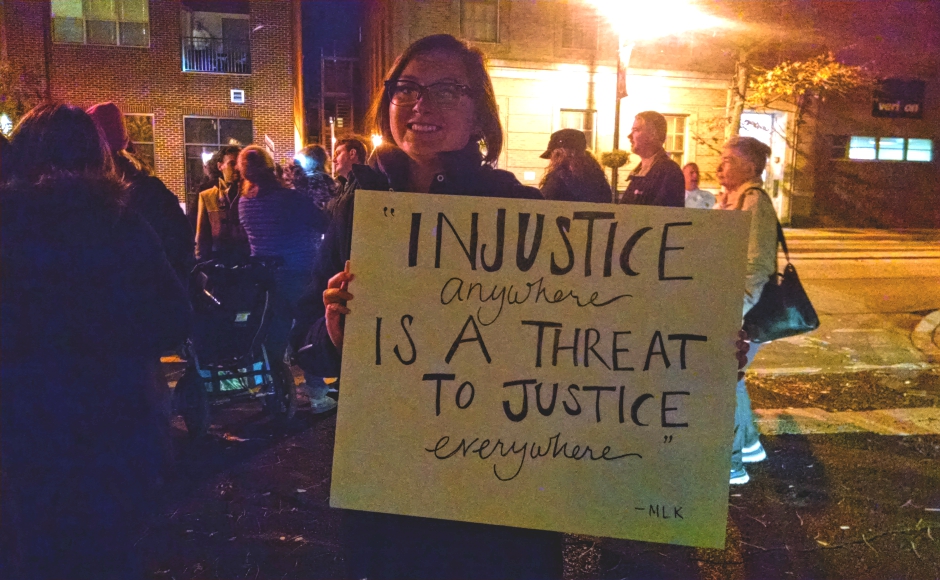 Elementary school teacher Emily Mason, another of the event organizers, said the event for her represented an opportunity “for families to heal together; to show that we’re better than this.

“There seems to be a lot of people who want to be active,” she said.

“I think it’s healing to gather together. It shows we’re not going to be silent.”

Ashley Affrunti of Westmont joined the march to make a statement against what she said is the broader scope of national inequality. Even though New Jersey is typically socially progressive, “injustice anywhere is a threat to justice everywhere,” she said.

“If you’re okay with one injustice, don’t be surprised if it comes back and affects you,” she said.

Affrunti said it isn’t important to her that the group necessarily holds a specific agenda; that simply gathering with other women in a place “where it’s safe to talk about feelings” would be enough.

The group will hold its first official meeting Sunday at the Unitarian Universalist Church in Cherry Hill.