Trending
You are at:Home»Government»Camden County»‘State of the Watershed’: Challenges, Solutions for Newton Creek

A brief history of the problems, conditions, and hopes for the future of the greenway connecting 11 local communities. 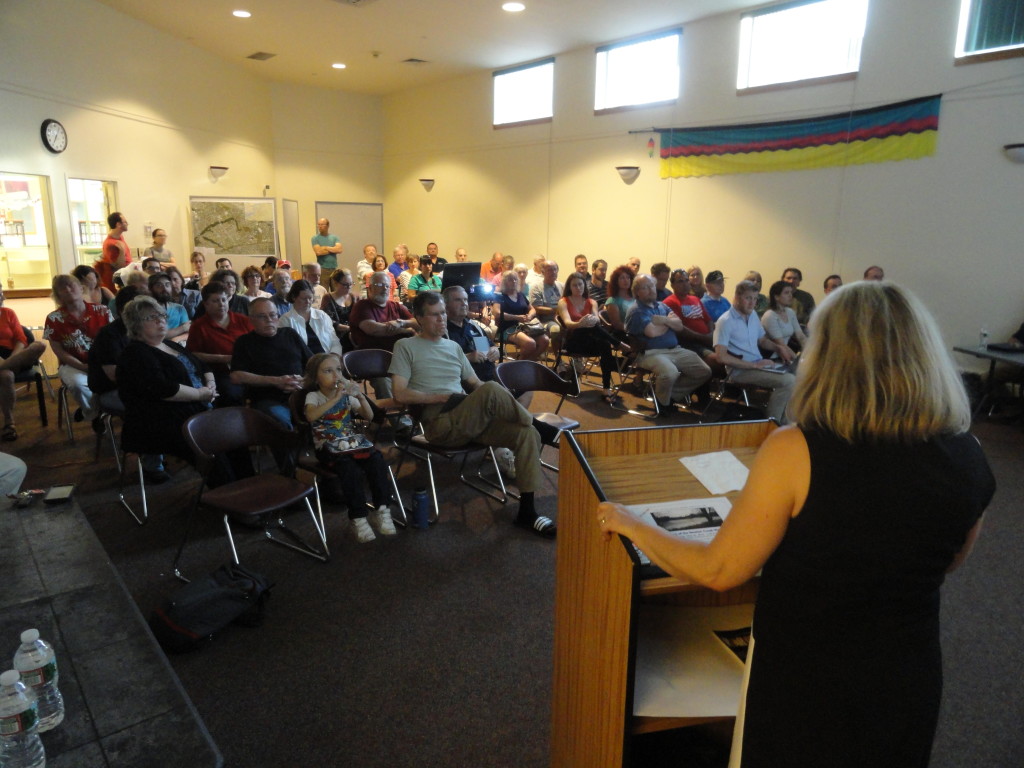 The Newton Creek Watershed is 13.6 square-miles of land that empties right into the Delaware River.

Its 3.8-mile drainage area touches 11 townships, is home to countless species of wildlife, and provides an amenity that many residents of Camden County enjoy and appreciate on a regular basis.

But after years of residential development, over-saturation of stormwater and sewer runoff, and a lack of funds dedicated to its maintenance, the watershed has deteriorated.

The problems aren’t irreparable; however, they will take time, money, and political will to address, said Lois Giovacchini, President of the Newton Creek Watershed Association.

On Tuesday, Giovacchini convened a “state of the watershed” meeting at the Haddon Township Public Library. A room packed with residents of its neighboring communities listened for some 90 minutes as environmental experts described the causes, current conditions, and proposed solutions to the problems of the watershed.

From woods to neighborhoods

“When our founding fathers came, this was a densely wooded area,” said Mike Haberland, Environmental and Resource Management Agent with the Rutgers Cooperative Extension of Burlington County.

After decades of development, however, the absorbent forest that once helped recharge local groundwater after a storm has been transformed into an area with 95 percent impervious coverage.

For decades, that stormwater has been eroding the local waterways and streams, even as the natural systems for recycling them have been subverted.

“We colonized this area for power,” said Andrew Donaldson, a senior environmental scientist at the York, PA engineering firm of Johnson, Mirmiran & Thompson.

In the 1930’s, Donaldson said, Newton Creek went from being a free-flowing stream to one impounded by mill dams, which trap sediments, and the waterway was “forever transformed.”

As development intensified, infrastructure built up with it, and the resultant sewer treatment plants became overwhelmed, Donaldson said. By the late 1970s, Newton Lake “didn’t have the natural flushing capabilities of a stream anymore,” he said.

Stormwater and sewage not only deposited chemical-rich runoff from lawns and septic waste into the waterway, but they also eroded the land it occupied.

“We’ve exceeded the state water quality standards,” he said. “We need to manage the nutrients and sediments that are entering the lake.”

“It’s getting way too many nutrients,” Souza said, including phosphorus from goose droppings. Every four birds generate as much phosphorus in one day as a home septic system, he said; for every pound of phosphorus, the lake will produce 1,000 pounds of algae. 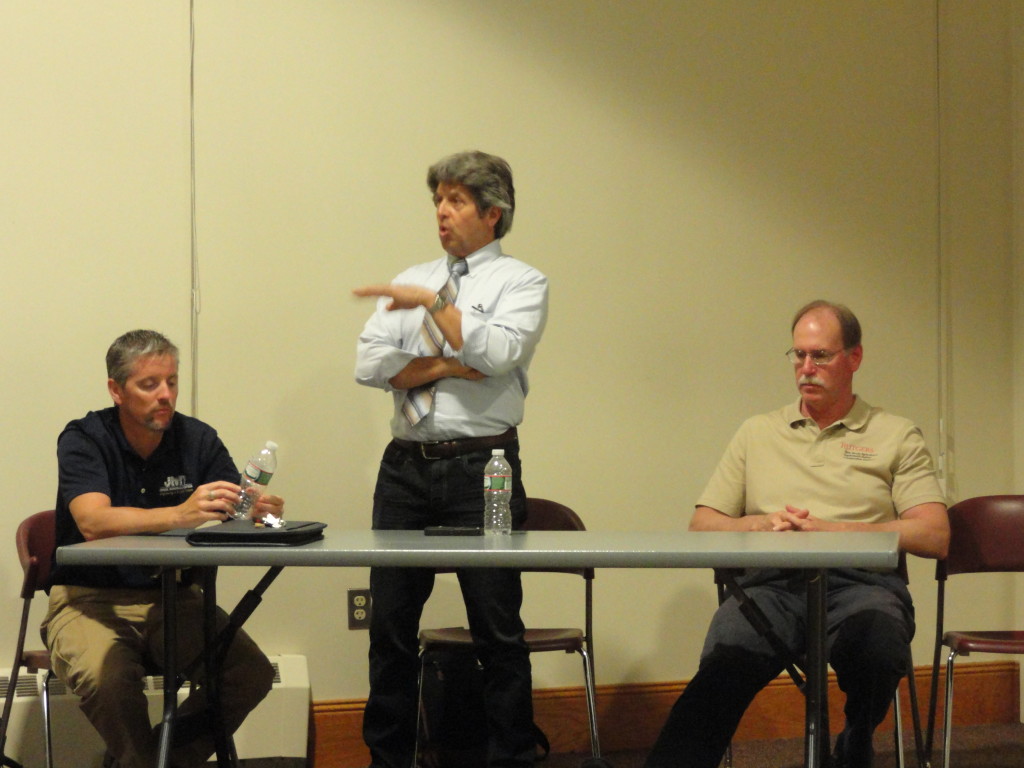 In order to immediately mitigate the impact of the environmental conditions in the watershed, Souza said, the first things to undertake are algae and weed harvesting, fungicide treatment, selective dredging, and aeration of the waterway.

“We have a five-year permit in hand to start dredging out this far eastern end of the lake [in Haddon Township],” Souza said.

“We’ll be removing all the sediment island that’s exposed right now. We’ll be using the Truxor and side-casting that up to one given location.”

The three-to-four-week process will cost $30,000, for which the Camden County government has already designated the funds. More dollars means that the process can be repeated elsewhere in the watershed, “targeting areas with the greatest density,” Souza said.

Princeton Hydro also plans to treat the lake with aquatic herbicides and algaecides that Souza said will target invasive species only, and which break down after 30 days.

“The objective is not to nuke the lake,” he said. “The emerging aquatic plants will not be affected by this herbicide.”

Souza also warned, however, that the sediment delta will regenerate “unless we are doing things to try to decrease the amount of loading into the lake.

“If you want to do away with this problem, you have to implement technically sound stormwater management,” he said.

Among such best management practices identified by Donaldson for that task are regenerating dense meadowland buffers along the banks of the river, stabilizing the shoreline to combat wind and wave erosion, and restoring the floodplain to its “appropriate sizing…dimension, pattern, and profile.”

He had no answer for either the amount of time or money it could take to employ such tactics, citing the need to finalize a master plan for the watershed, which is expected this fall. 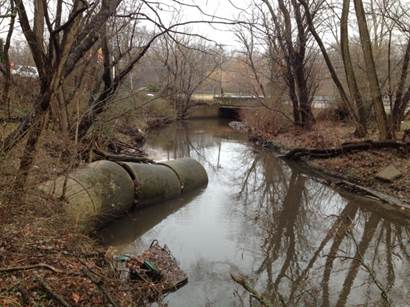 “We can’t handle this all in one chunk,” Haberland said. “We want to take some bites out of it.”

New state regulations governing the use of fertilizer will help, Haberland said.

Landscapers must be trained and certified in the application of fertilizers, which cannot contain phosphorus unless a soil test proves a need, or new turf is being laid. Fertilizer cannot be laid within 25 feet of a waterway, during the winter seasons or rainfall, and any excess must be swept up.

Haberland advocated for green roofs, such as the one on the Camden County Environmental Center in Cherry Hill, and the erection of rain barrels and rain gardens on private properties and throughout local communities. He also said that local governments need to get away from mowing their detention basins in order to create native meadow habitat.

“In Cherry Hill, we converted five basins to meadow, and they’re telling us we save them $20,000 a year in maintenance costs,” Haberland said. “If you plant a meadow, you’re going to attract good ecology,” he said; “a pollinator refuge.”

Landscape architect John Nystedt of the Delaware Riverkeeper Network, said that greening the stormwater infrastructure of local communities helps to address the problem in larger ways. He described the need to capture the 96 percent of annual rainfall that comes with small storms in bio-retention systems, the better to relieve stormwater systems in town. 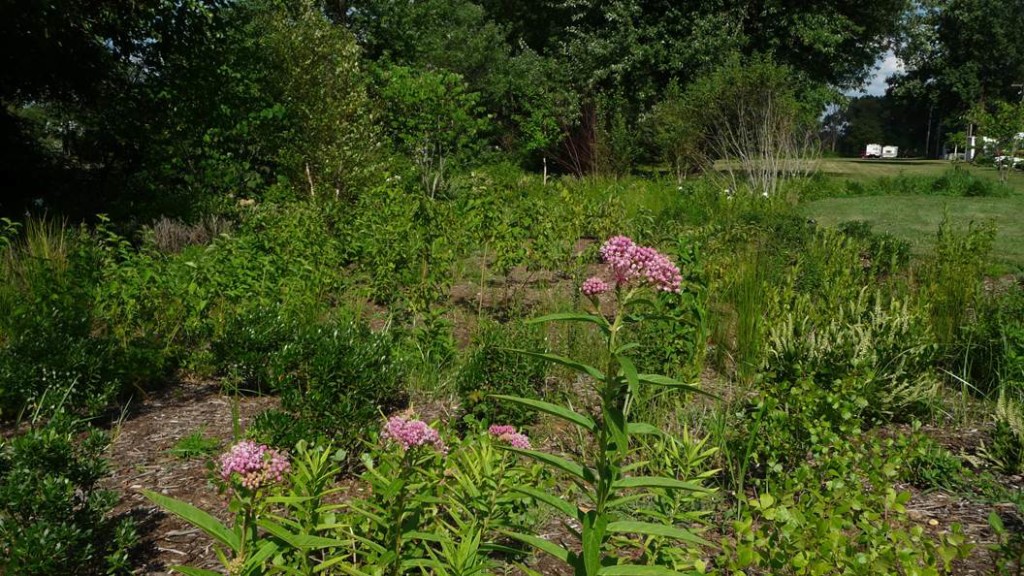 Rain gardens at Van Sciver Elementary School in Haddon Township and in Audubon Park have made an impact in their communities, he said.

The Riverkeepers also have a plan to revitalize the ecosystem along Newton Lake, and have already overseen the installation of a pair of rain gardens at the Haddon Township Environmental Center during the winter.

Beyond constructing such features, however, “we all have something to do,” Nystedt said.

“Do we have a washing machine that’s plugged into the creek? Do we have sump pumps that pump water into our sewer system?” he asked. “When it’s raining, people are also pumping their sump pumps into their drains where the toilet goes. It’s overwhelming the systems in town.”

At a local level, Nystedt also identified “cracked” or “underdesigned” sewerage overflows—such as those on Heather and Westmont Avenues in Haddon Township and Stokes Avenue in Collingswood—that are in need of repairs.

“Basically, it’s you guys going up to your commissioners and your public works and talking to them,” he said. “Feel free to get active and start to work on these issues. When you see a sewage overflow, call DEP.

“Be an environmental watchdog and advocate,” Nystedt said. “It helps everyone.”

‘What is the overall master plan?’

“It’s great to have all these spot ideas,” Forbes said later, but added that he and other leaders have been awaiting a master plan for remediation of the watershed for years.

“If we’re going to throw money at something, I want to do it in a way that we’re all going to benefit,” he said.

Forbes said that a proposal from Princeton Hydro to perform short-term maintenance on Peters Creek in Oaklyn was comparable to the cost of buying a Truxor machine itself, so his town council opted to just buy the machine for $130,000 with the hope of renting it to other communities.

“[Princeton Hydro bid] $12,500 for the week on an eight to ten-week effort, and then they’d have to come back and do it throughout the year,” Forbes said. “Our thought is that we can work in conjunction with the county.” 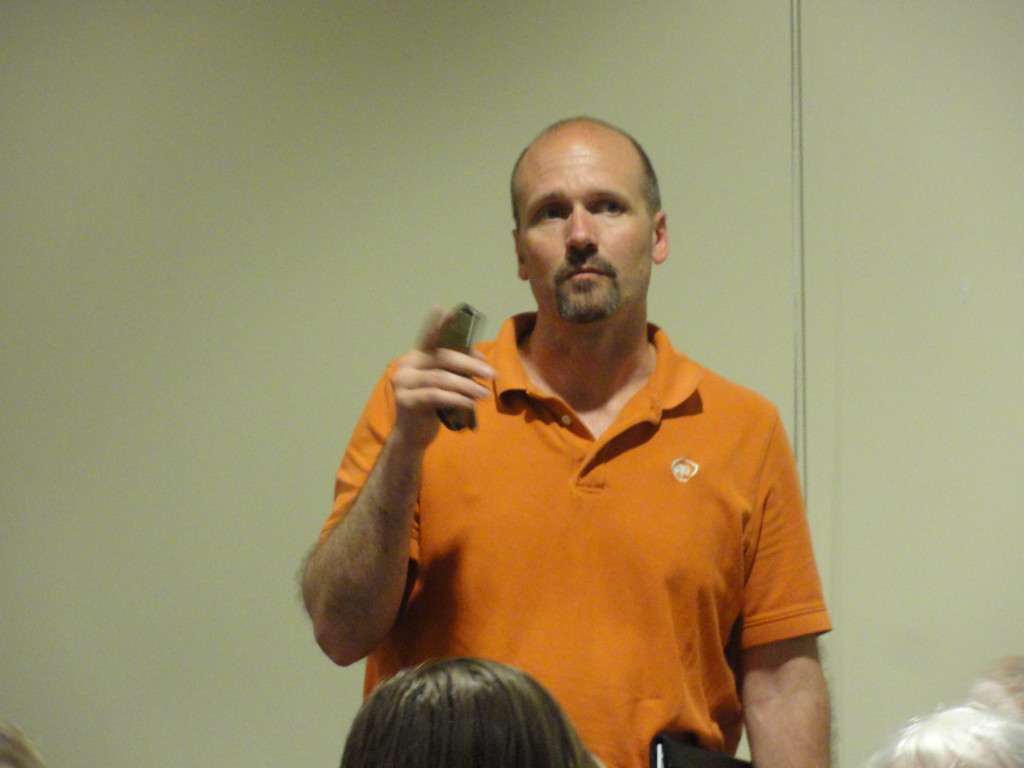 Forbes said the Truxor that Oaklyn will purchase can perform dredging, underwater harvesting, and piledriving to fix the seawalls of Peters Creek. But without the coordination of an overall master plan for repairing the area, he said the borough can only do so much to make an impact.

“There were some great ideas that came out of this today,” Forbes said.

“What’s the five-year plan? What’s the ten-year plan? Am I allowed to dredge? Nobody’s really giving me those answers yet.”

More than a few residents at the gathering complained that the immediate focus of the county government has largely been on the beautification efforts at Cooper River Park, which Forbes said makes sense for its economic impact.

“Having the longest and flattest and straightest body of water on the East Coast in the Cooper River is money in the bank,” he said. “When you start to get the money back, it can be distributed elsewhere. That’s the reason the county’s doing it, and I fully support it.”

However, Forbes also pointed out that towns like Oaklyn “were forgotten for years,” and the effects of that neglect are becoming apparent.

“It costs a lot of money, and not doing anything for years and years and years, that’s where we are,” he said. “It’s going to take years to get it back and then years to maintain.”

Although organizers criticized the over-development of Camden County as contributing to the problems of the watershed, local governments are forced to trend in that direction to keep up with the cost of services in the state, the mayor said.

“The way that the tax structure is in New Jersey with property tax, you’ve got to max out,” Forbes said. “We don’t have ratables. We can’t do anything but develop, and that’s what these towns are stuck with.

“If I can do something to lower your taxes, that’s what [taxpayers]want to see,” he said. “What are you doing that affects them directly? That’s what all the taxpayers are asking.” 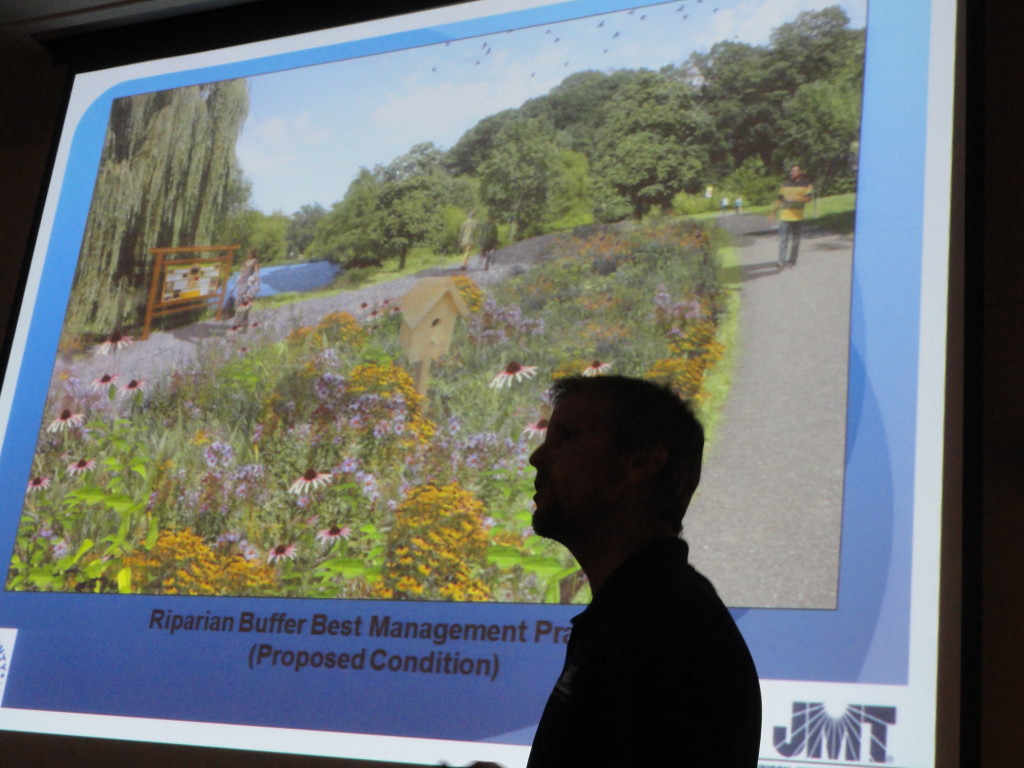 ‘All the municipalities need to come together’

Of those, he said Cooper River and Newton Lake are the top two.

“It’s got to be part of a multi-pronged effort to eliminate upstream sources [of deposits],” Kricun said.

“Fixing broken storm drain lines; raising the bottom of the lake. The key is to dredge in there now and also prevent re-sedimentation from the erosion sources upstream.

“The third component is we need the community to assist us,” he said. “The biggest part of the problem is the upstream scouring. Every little bit helps.”

Kricun also credited the Watershed Association and Riverkeepers with providing “the best advice” for agencies like the CCMUA in addressing the issues at work in the watershed. The next steps, he said, are for communities to mobilize as well.

“All the municipalities need to come together and say, ‘We need a plan.’”