A call for service at Extra Space Storage on Rockhill Road turns what was believed to be a routine incident into an escalated response. One firefighter was transported to the hospital for evaluation. 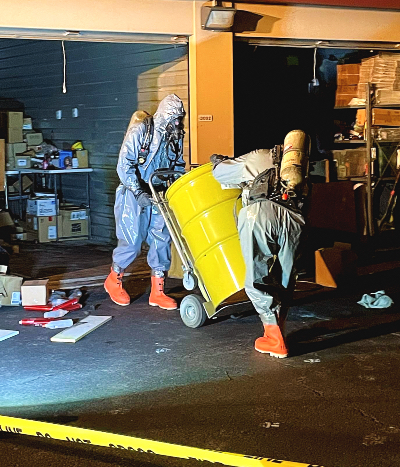 A Sunday evening fire at a storage facility in Cherry Hill became a hazardous materials (HAZMAT) incident in which firefighters worked to contain what they believe was a chemical fire.

First responders were called to the unit block of Rockhill Road around 6 p.m. August 7 for a report of a fire at the Extra Space Storage facility.

After isolating the incident to a single unit, firefighters began to experience signs of chemical exposure during their attack.

“You can get a sense that this is not a normal fire,” Callan said, citing the color and density of the smoke as key indicators.

“We took one firefighter, rinsed off his gear, and did a pH test on the water runoff to see if there was any chemical,” the chief said.

“There was nothing, but we err on the side of safety, and laundered all the gear [afterwards].”

One firefighter was transported to Cooper University Hospital for evaluation, and was quickly released, Callan said.

No injuries were reported, and the incident was brought under control within the hour. Hazmat team and support companies remained onsite until 11:30 clearing the scene.

The chief encouraged anyone tasked with safe chemical storage to follow regulations outlined in the material safety data sheets (MSDS) pertaining to their formulation.

According to Christopher Costa, Supervising Environmental Health Specialist with Camden County, the chemicals involved in the fire were ammonium persulfate, potassium persulfate, and sodium persulfate, which are used in various commercial processes.

Costa said that the chemicals were not stored irresponsibly within the facility, which bears the ultimate responsibility for the contents of its rental units.

He also confirmed that an environmental contractor was hired to oversee the proper disposal of the products in question as well as to decontaminate the facility.