Trending
You are at:Home»Police & Fire»Straight-Line Storm Rips Through Camden County

Locally, significant property damage was observed in a narrow path from Haddon Township to Collingswood, with fallen trees, closed roads, and downed power lines. No injuries were reported. 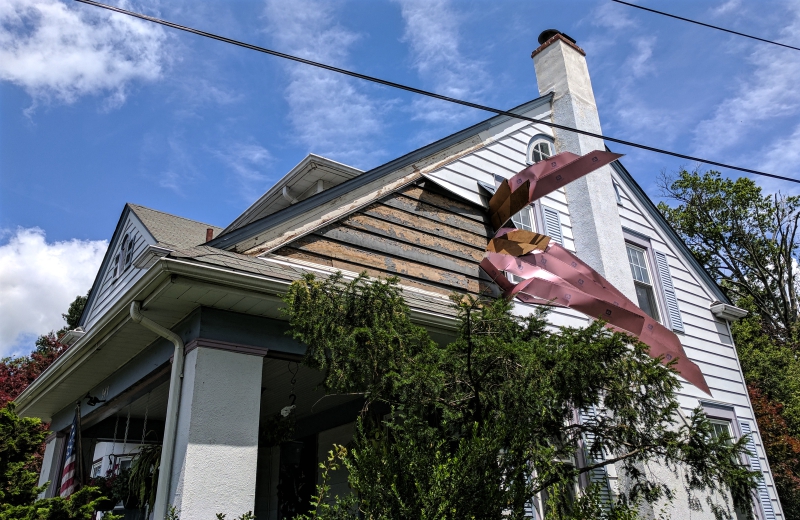 Siding ripped off the roof of a Park Avenue home in Collingswood. Credit: Matt Skoufalos.

A powerful straight-line storm that cut through Camden County early Saturday morning has left thousands without power and damaged a number of homes in several towns.

Collingswood Fire Chief Keith Davis said most of the damage his borough sustained has been focused in an area from Cuthbert Boulevard and Haddon Avenue all the way down to Linwood Avenue.

Camden County road crews were clearing fallen limbs around Newton Lake as well; according to statements from county officials, the damage extended as far south as Waterford Township.

Although the storm lasted just 15 to 20 minutes, it was powerful enough to uproot mature trees, knock down power lines, and damage a significant amount of property. More than a few roads were impassable for fallen trees, and multiple arborists were working to chip wood and pull branches off utility lines. No injuries were reported.

“We have a lot of trees down; wires down within the trees,” Davis said. 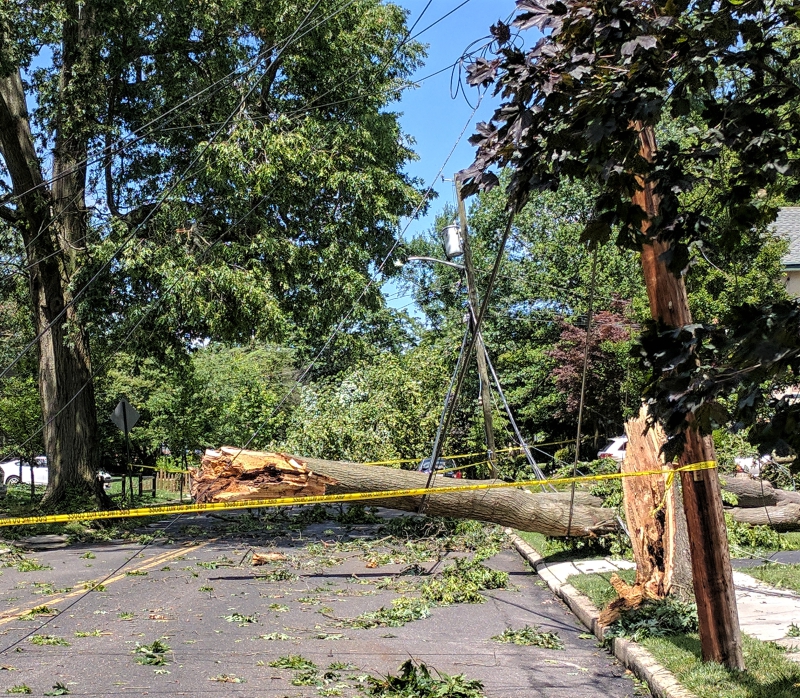 The chief advised residents to exercise caution, not only for the visible storm damage, but for the hidden dangers posed by live wires and loose branches that are still trapped in the canopies above.

Collingswood Mayor Jim Maley advised residents to “keep kids away” from areas with downed lines as well as to watch for trees with limbs that have broken.

“Power lines might be wrapped in trees; you can’t see them, and there’s a good potential that they’re still live.”

PSE&G has shut off power throughout most of the affected area while crews work to clear fallen tree limbs. By 1 p.m. Saturday, an estimated 1,300 to 1,400 customers in the immediate region were without power with no estimated timeline for its restoration.

Westmont Fire Chief John Medes said the storm had traveled through Haddon Township from the Collingswood border all the way through to Windsor Avenue on the Haddonfield border. 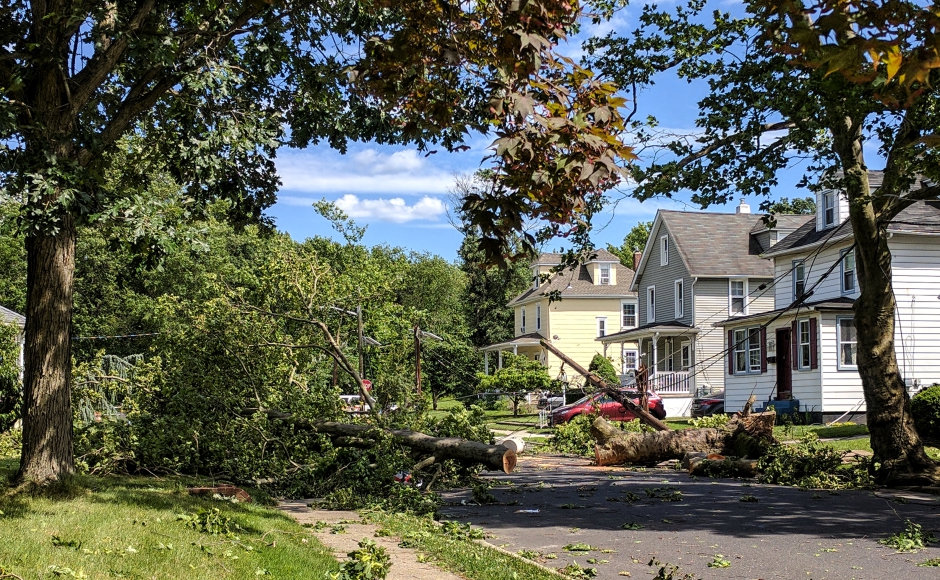 “Power’s out, roads are closed; right now we’re helping DPW get roads clear that don’t have power lines on them,” Medes said.

“These are full trees” that have fallen.

Haddon Township Mayor Randy Teague reported several utility poles had been snapped in half, leaving multiple residences throughout the township without power.

Homes on Lakeshore Drive, Emerald Avenue, and Strawbridge Avenue sustained significant storm damage, with an intersection at Emerald and Toledo Avenues among those impassable for a fallen tree. 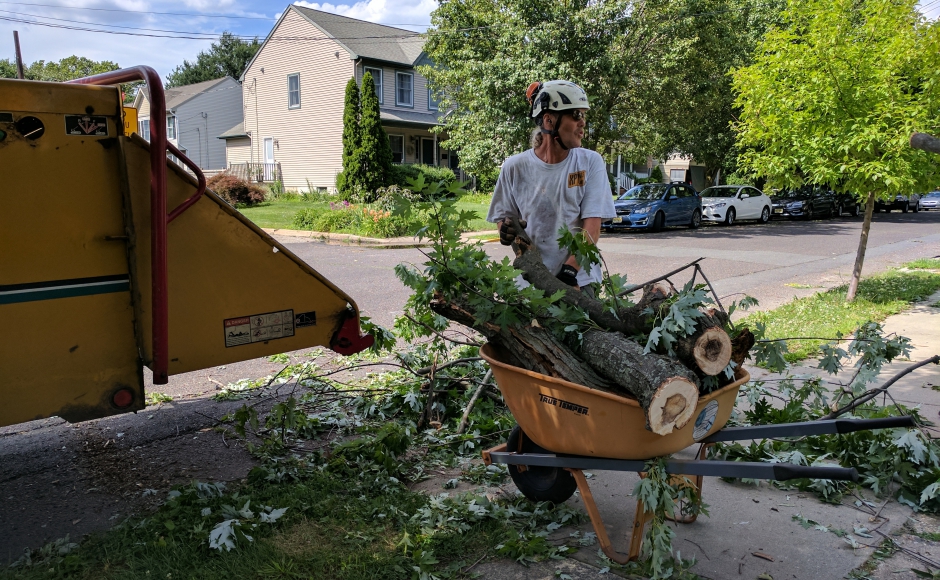 Teague said independent tree services had been hired to support the township public works crews in their removal of debris.

Late in the afternoon Saturday, chippers made their way through the streets, helping residents feed branches into the works.

In Oaklyn, outside of a handful of homes on Kendall Boulevard, much of the town was untouched by the storm, said Mayor Bob Forbes.

At least three houses were damaged, but none to the point of being uninhabitable.

“It’s weather,” Forbes said. “We deal with it when we get hit with it.”

It was a similar story in Audubon, where Mayor John Ward said one home suffered minor damage and an interruption to utility services. Aside from those isolated incidents, the borough “appear[ed] to have been spared,” he said. 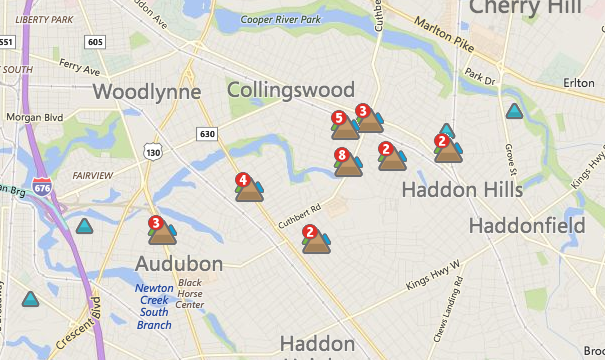 National Weather Service (NWS) meteorologist Al Cote said that the damage from the storm was more than likely caused by straight-line winds, but that a conclusion had not yet been made.

“At this point, it’s not really determined,” Cote said.

“It’s possible there was a small, brief spin-up of a tornado along the line, but at this point, we’re not going to consider it a tornado.”

Cote said NWS defines tornadoes in part by a radar signature that would indicate circular winds as well as the path of the damage.

Davis advised anyone who suffered property damage to contact the local government as well as their insurance agencies. 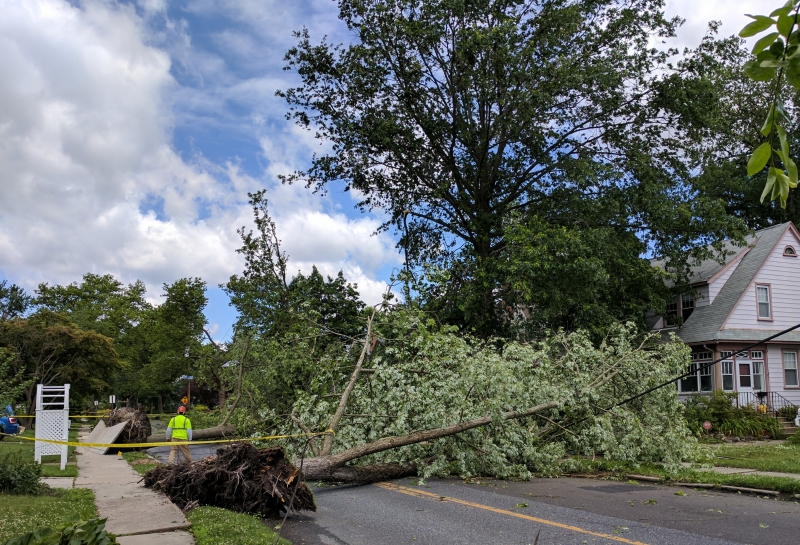 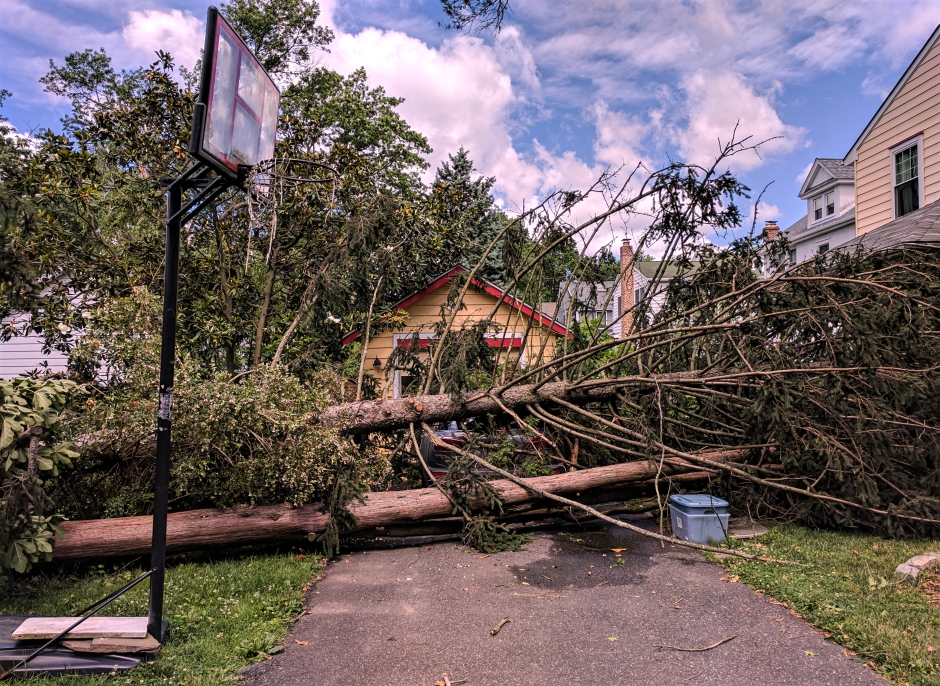 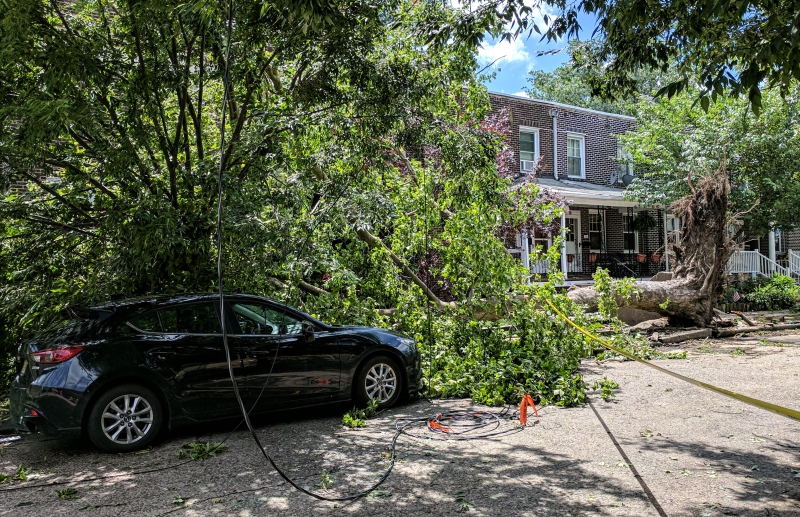 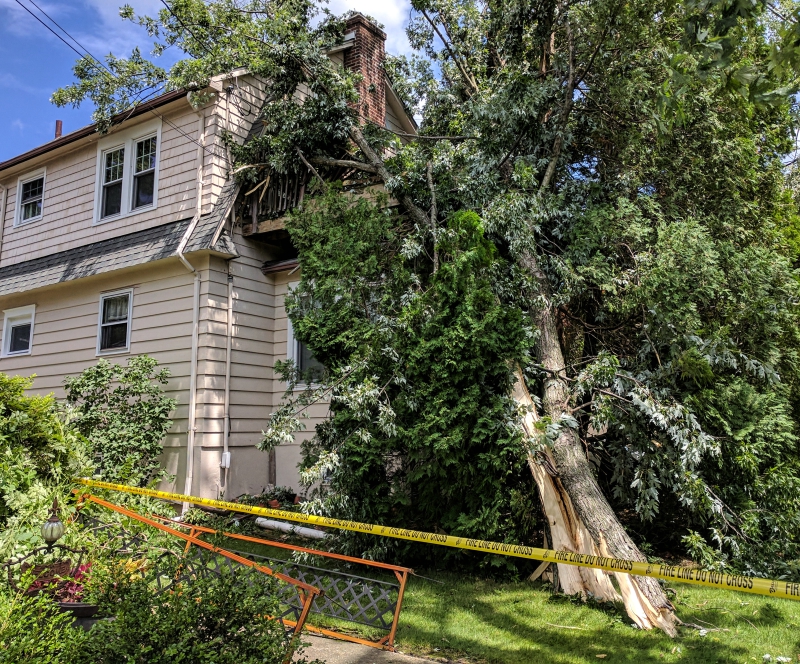 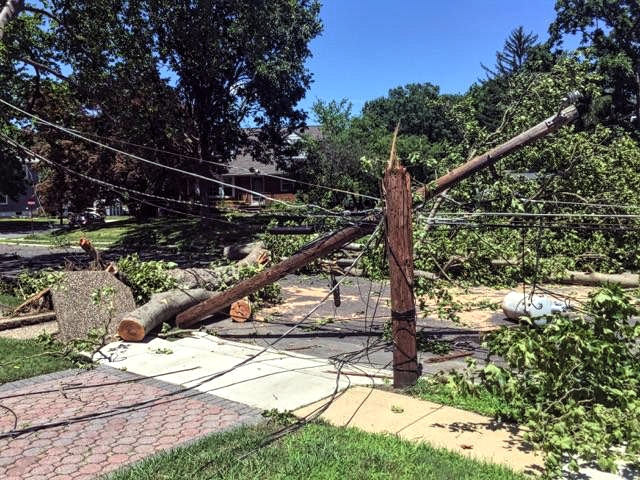 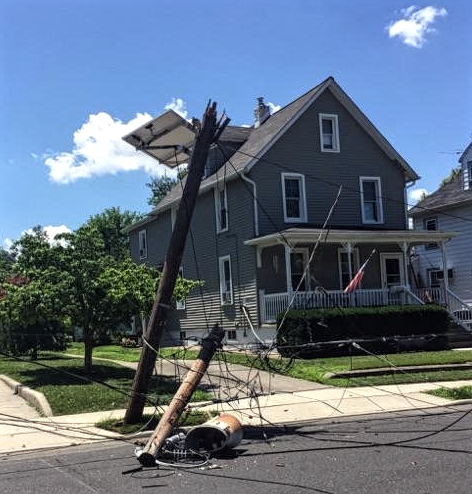 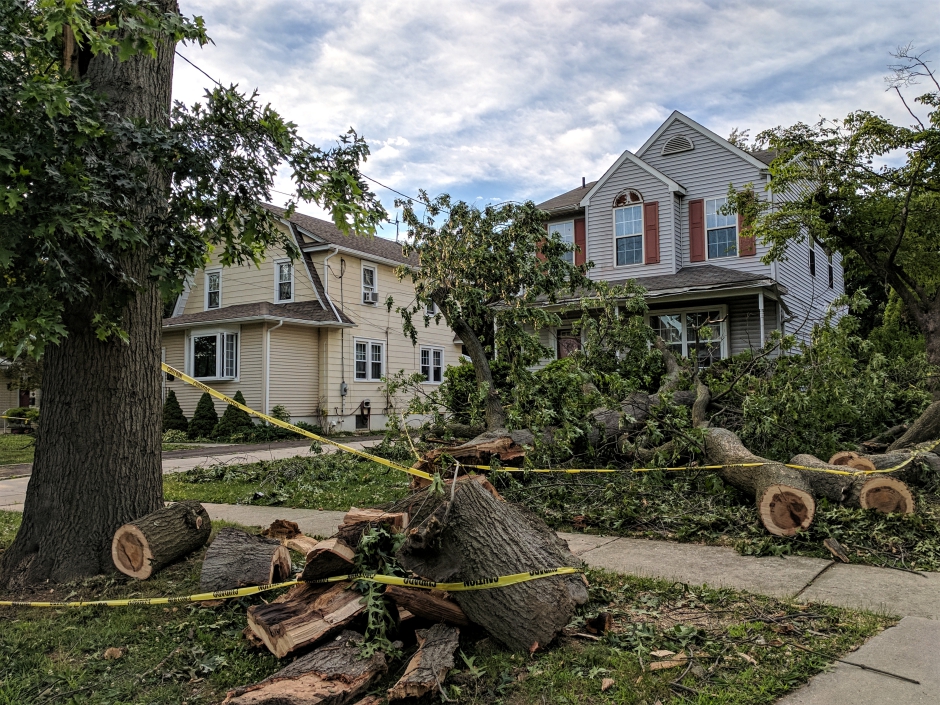