The Blackwood native makes his second appearance on the reality competition, bringing with him the goodwill and support of fans and coworkers at his home base, Hocus Pocus Tattoo of Oaklyn.

When season 14 of the reality competition show Ink Master debuts on Paramount+ next week, South Jersey will be well-represented among the artists vying for the $100,000 prize.

Blackwood native Chris Shockley, a traveling tattoo artist whose home base is Hocus Pocus Tattoo of Oaklyn, will make his return to the show, having first competed in its 11th season back in 2018.

At the time, Shockley finished sixth of 22 contestants. Now he’s hoping the additional years of expertise will catapult him to the title.

“The first time, I did way better than I thought I was going to do,” Shockley said. “I’ve been working on my craft, constantly trying to improve. Let’s see where I stack up again.”

Shockley describes his art as “pretty diverse,” with influences ranging from classical art forms to pen-and-ink portraiture. He credits his parents with exposing him to a variety of masterworks from an early age, and with encouraging his creativity.

“I started drawing when I was four,” Shockley said. “We were not the most well-off people, but my mom and dad put a lot of effort into getting me to see different kinds of artwork after they realized that was my passion.

“I just like art in general,” he said. “I love the idea of being able to express yourself.”

Shockley’s artistic talents took him through vocational school for graphic design and pre-engineering; despite flourishing in both programs, he didn’t like the idea of being stuck behind a computer all day.

After a year of skateboarding to local tattoo shops and “pestering people” to give him a shot, Shockley got his start at Empire Tattoo, at 17; he worked there for seven years before branching out on his own.

He met tattoo artist Jesi Dennison at Empire, and Dennison invited Shockley to join her when she opened up Hocus Pocus. When he’s not traveling across America and the world, Shockley always has a guest chair in Oaklyn.

“We’re his home base when he’s in Jersey,” Dennison said. “We love it when he comes back from places because he gets an opportunity to work with some of the best. When he’s catching things from them, we’re always picking his brain.”

Dennison said Shockley’s not only a talented artist, but also an egoless one. In an industry where client relationships are as important as artists’ abilities, he excels in translating ideas into artwork, and making his patrons comfortable throughout their experience.

“For probably 70 percent of our people, there’s definitely a story behind what they’re getting done, whatever it may be,” Dennison said. “If it’s a single tattoo, a sleeve, a combination of tattoos, they’re telling a story of something that’s personal and important to them, and I think it’s super-important to be able to tell that story.

“Chris is not only an amazing artist, but he’s also an open book,” she said. “He’s been a fabulous artist as long as I’ve known him. I think what he’s putting out is incredible.”

In the tattoo business, artists can form lengthy relationships with their clients. Some work exclusively with specific artists, and will travel hundreds if not thousands of miles to meet them.

Brennah Lambert of the vegan restaurant LesbiVeggies in Audubon hasn’t had to go that far to work with Shockley, but he has been her artist of choice for years.

Lambert estimates that Shockley’s responsible for “probably 85 percent” of the tattoos she has. She’s so comfortable with his work and demeanor that she doesn’t go to anyone else. 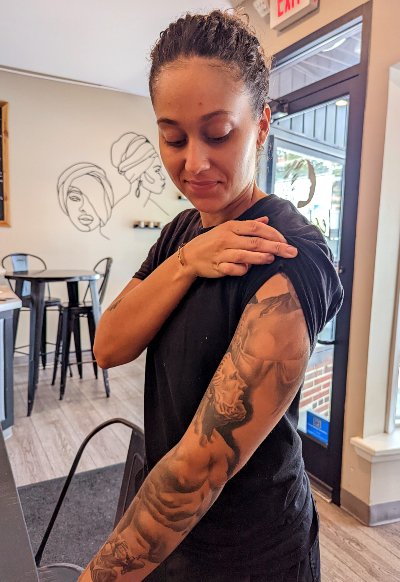 “He’s my tattoo artist,” Lambert said. “We have the same kind of vibe and energy.

“He’s a quiet dude, and I am too,” she said. “It’s a little relationship. I appreciate him from an artist perspective.

“People can draw and they’re good artists, but tattooing is a different thing.”

Although Shockley’s confidence in his abilities has grown with his time and experience, he still considers himself a student of the art.

Ink Master has given him the opportunity to interact with other of his peers as well as with more established artists whom he appreciates.

“I’ve never been starstruck until this season,” Shockley said. “You put your mask on, you put a smile on, and that’s it.

“[But]  Seeing Nikko Hurtado and knowing he was going to be one of the judges; I’ve looked up to this guy for years,” he said.

“Ami James; I remember when Miami Ink came out. I’m getting to meet these guys now.

“They’re going to be critiquing what I do,” Shockley said. “These are the guys who helped influence me to get into this; these are my peers who are judging my work.

“I never thought in a million years I could be one of the people who’s going to be on TV getting to be judged by some of the guys I’ve looked up to for years.”

Fortunately, Shockley said the judges were kind, and offered constructive criticisms of the contestants’ works. They’re aware that all the artists still have to make a living in the field, and focused their feedback on building them up rather than destroying them to create a television moment.

“There’s learning and growth, and that’s something I really appreciate,” he said. “You’re getting to learn from a whole bunch of artists who are amazing in their own right. It’s a beautiful thing, and it’s extremely humbling. Getting to see what everybody else is doing and how they approach a problem is mind-blowing.”

Shockley isn’t sure where tattooing will take him next. Having a moment on Ink Master, let alone a second appearance on the reality competition, shines a spotlight on his work that can be lucrative and career-elevating.

Whether he decides to open up his own studio, which he’s previously considered, or stick to touring, he knows he’s got the support of his Jersey friends and family behind him.

“They’re all rooting for me, hoping I do well,” Shockley said. “It’s been a weird adventure, but I’m going to try to figure it out along the way.”