Trending
You are at:Home»Business»The Factory Launches ‘Made in the USA’ Product Line

What does it take to create a product with 100-percent American-made components? Cherry Hill entrepreneur Tom Marchetty found out with his Factory Workers line of goods. 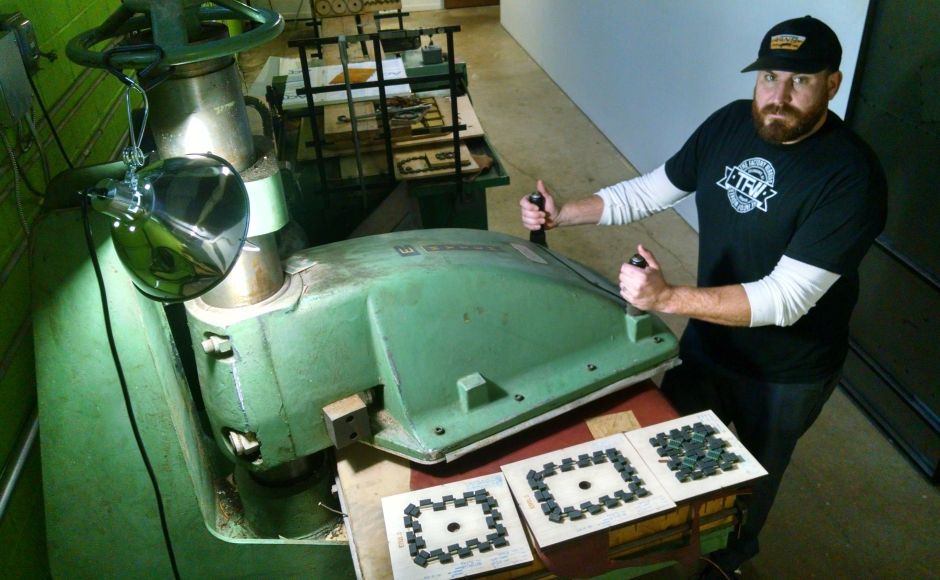 Tom Marchetty has had a front-row seat to the slow deterioration of American manufacturing.

As a teenager, the Cherry Hill resident saw equipment from shuttering workshops pile up in the Camden City warehouse of his family’s industrial repair and salvage business.

Filing cabinets that once held row after row of invoices from factories across the region became a dead-letter office.

The most frequent customers became those shipping off functional machinery to manufacturers who were opening up production facilities overseas.

“That’s when my eyes opened up,” Marchetty said. “I saw first-hand all these companies moving or just shutting down because they couldn’t compete with imported goods. And the mentality of everybody in the 90’s and 2000’s turned to ‘whatever I can get the cheapest.’ We got into a ritual of buying disposable goods.”

Marchetty didn’t stop collecting high-end woodworking, metalworking, welding, and machining tools, however. A few years ago, he put his considerable stockpile into service at a pair of makerspace locations in Collingswood and Cherry Hill, subdividing a former theater and office building, respectively, into business incubators and community workshops. He called them The Factory out of deference to the workers whose ways of life were lost with the closure of those production businesses. 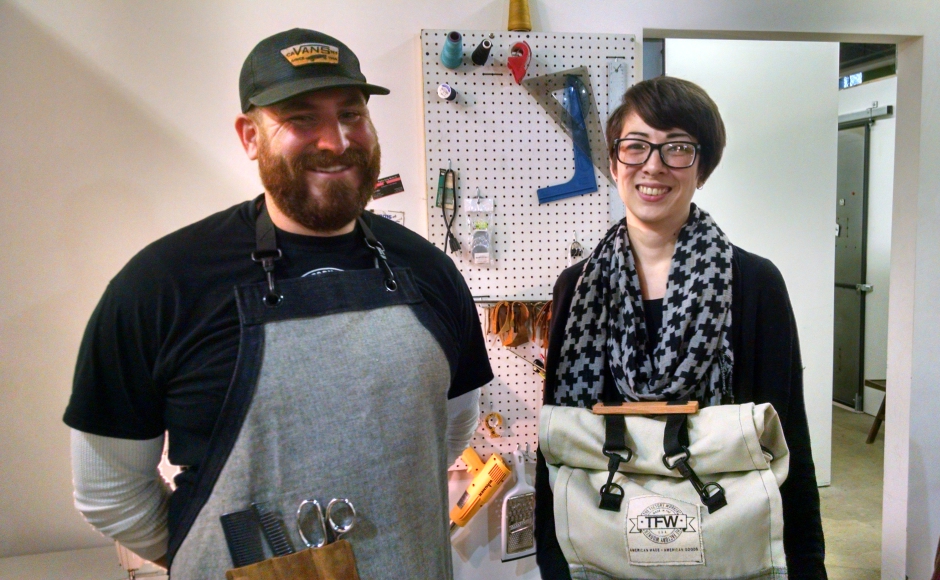 Among the equipment at his Cherry Hill location, Marchetty discovered old riveting and snap machines, a clicker press, and a roll dye former: gear used to make leather and textile goods.

He spent several months debating how best to put them back to work—and even longer searching for domestically made materials to use in the process.

Over the course of four months, Marchetty discovered just how many manufacturers promoting their products as American-made were actually importing many components. Those labeled “Assembled in USA” were more up-front about their sourcing, but Marchetty was on a mission to produce goods made entirely from domestic materials.

“Stuff wasn’t made in the U.S., so I would send it back,” he said. “The problem is there’s not much of a selection. Everywhere we looked, it was very discouraging, to the point where I almost did what my competitors were doing.”

To Marchetty, the American-made label is a mark of durability. His intends The Factory Workers line—the name is his nod to the collective efforts of American labor—to become an heirloom brand of goods strong enough to be handed down for generations.

The Factory Workers gear includes tool rolls, adult- and children’s sized work aprons, utility bags, backpacks, and totes. From the hardware to the fabrics, every element is produced in the United States and assembled by hand in his Cherry Hill studios. 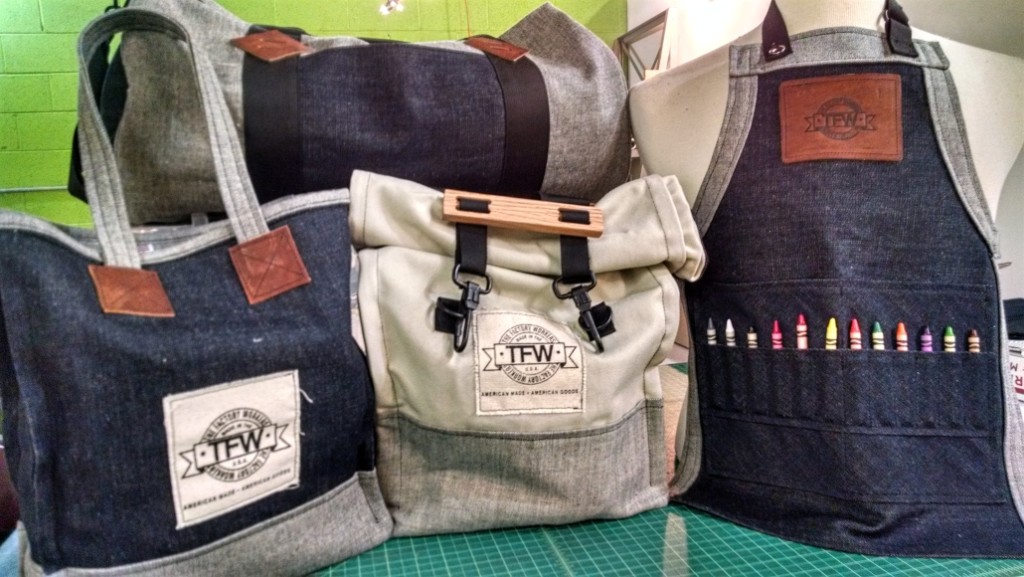 “Every time you purchase something from us, it’s helping run another factory,” Marchetty said; “a zipper, a rivet, a grommet, the leather, the denim—they all come from U.S. factories.”

Because The Factory Workers line is hand-made in limited quantities from high-quality materials, retail pricing is on the premium side, with individual goods ranging from $75 to $250.

“It feels good to be a part of this,” Marchetty said. “There’s not much profit in this. There could be, down the road, as we grow and expand. But right now everything is hand-crafted. We’re not mass-producing anything.”

Morgan Kato of Philadelphia is Marchetty’s chief collaborator. Trained as a mechanical engineer, she designs and fabricates The Factory Workers products with his input. She is aided by Sarah, a fashion designer and recent L.A. transplant who also works in a Philadelphia-based arts nonprofit. Both women believe in the market opportunity for the line as well as the intention of its “Made in the U.S.A.” philosophy.

“It’s something that manufacturing has moved away from,” Kato said. “It’s an important thing to keep going.”

“I’m really thankful to be a part of everything,” Sarah said. “I think it has a lot of history to it, and Tom’s passion for it is very encouraging and exciting. [Having been] involved with different companies that made things overseas, I see the benefit of trying to make things local and build up the economy within the U.S. Sometimes it costs a little bit more or takes a little more time, but the overall benefits are really good.” 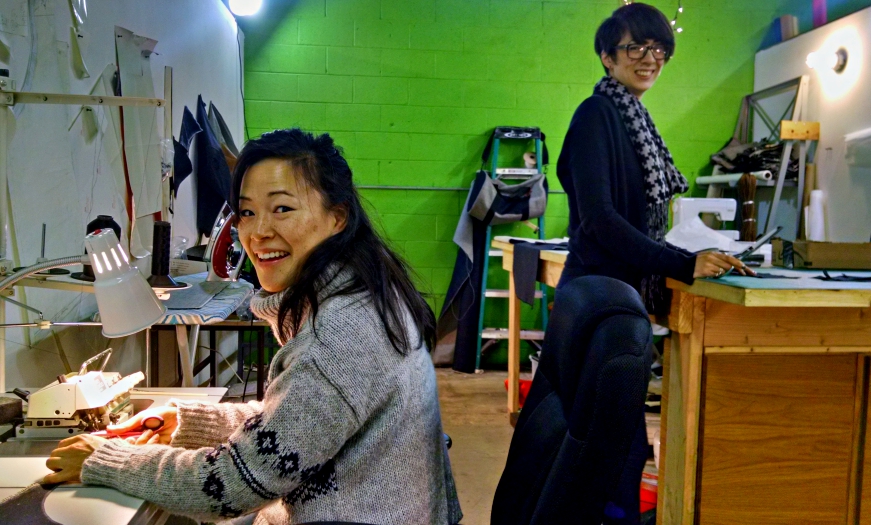 Kato said her focus has been on how to wring the most out of the materials she uses.

All are neutral-colored, machine-washable, and made with natural fibers.

Although the brand’s target audience is craftspeople and trade workers, the products are designed to appeal to “anybody who does any sort of artistic or creative work,” Kato said.

“We’re trying to figure out the best way to do things to accommodate the largest group of people,” she said.

Mitch Gorshin sees The Factory Workers line as fitting in well with the high-end, functional, everyday products he retails at his Haddonfield shop, Gorshin Trading Post. That’s why he pushed Marchetty to try them out on his shelves first. Customer interest was there almost overnight, he said.

“We’re not 100-percent U.S.-made in this store,” Gorshin said. “We carry stuff from Ireland, Italy, New Zealand, but I do try to feature locally-made and U.S.-made products, and this fit the bill. 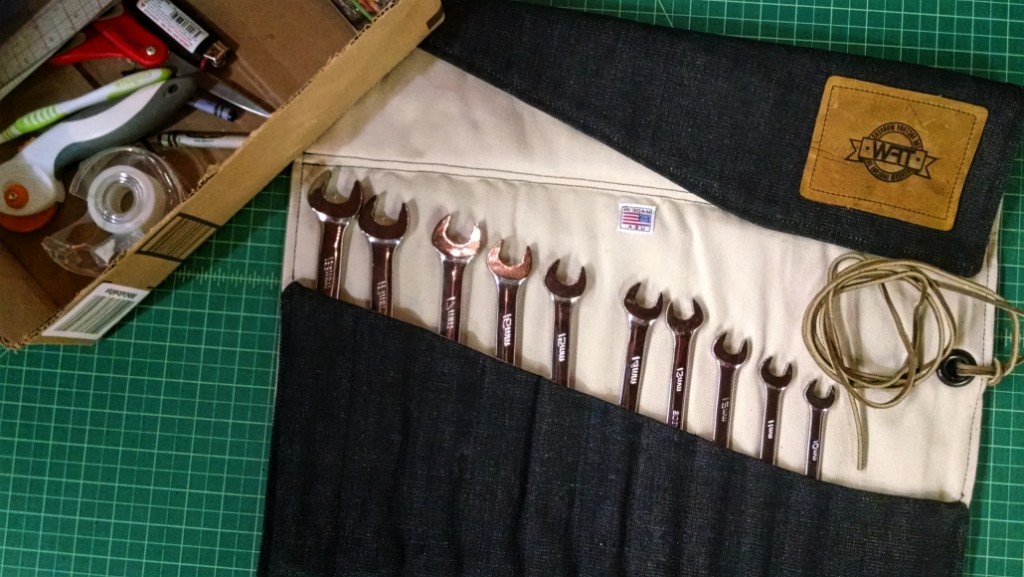 “It’s stuff you can use each and every day, and it’ll hold up,” Gorshin said. “It’ll stand the test of usage and time.

“[Shoppers] liked [The Factory Workers products] just as an item, but the story behind it put a cherry on top,” he said.

Gorshin isn’t against global goods. A world traveler, former Disney imagineer, and hotel designer in addition to being in the retail business, he’s seen the value of cultural traditions that are passed down through craftsmanship.

Whether in Italian leather-making, Japanese steelwork, or Indian textiles, Gorshin said there are “exquisite” products available from every culture on the planet. He charts part of the abandonment of American manufacturing to a cultural valuation of corporate ladder-climbing over these production processes. 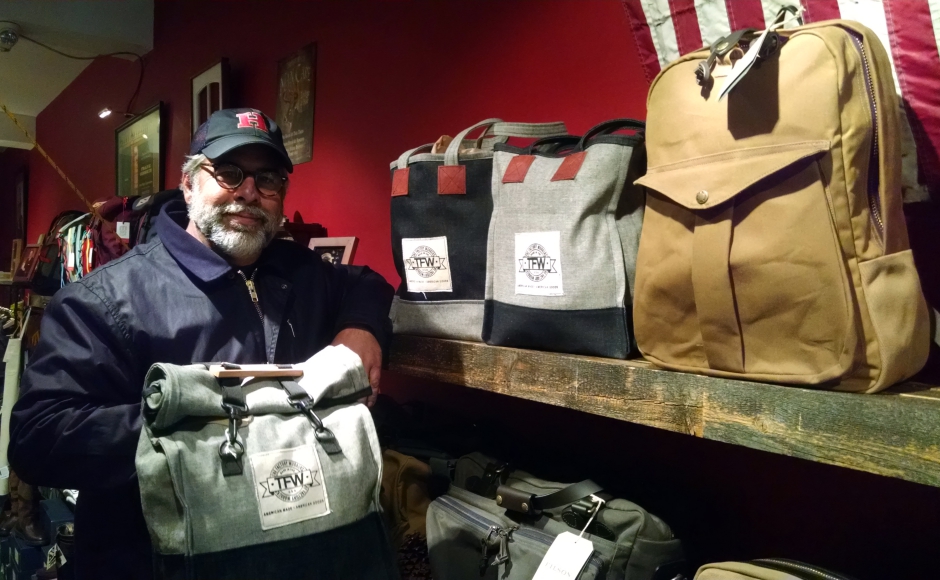 “We’ve stepped away from the world of manufacturing,” Gorshin said.

“People are seeking better margins, but the quality has gone down.”

“Great manufacturing comes from great learnings, whether it’s on domestic soil or it’s international,” he said.

“You put what you learn into something you want to make right here.”

“I’ve been in the factories that have closed up,” he said. “I see them turn into condominiums. Everybody needs to participate in trying to buy American-made things, because if not, we’re not going to have anything [made]in the U.S.”