Trending
You are at:Home»Government»Camden County»The Future of Camden County: a Master Plan

Planning Director Andrew Levecchia talks about the need for smart growth in Camden County, which in May released the first update to its land use plan in 40 years.

America is “a transient society,” said Camden County Planning Director Andrew Levecchia, full of people who are often moving from place to place.

Yet when it comes down to it, Levecchia said, most of those moves are only within 15 minutes of one another. 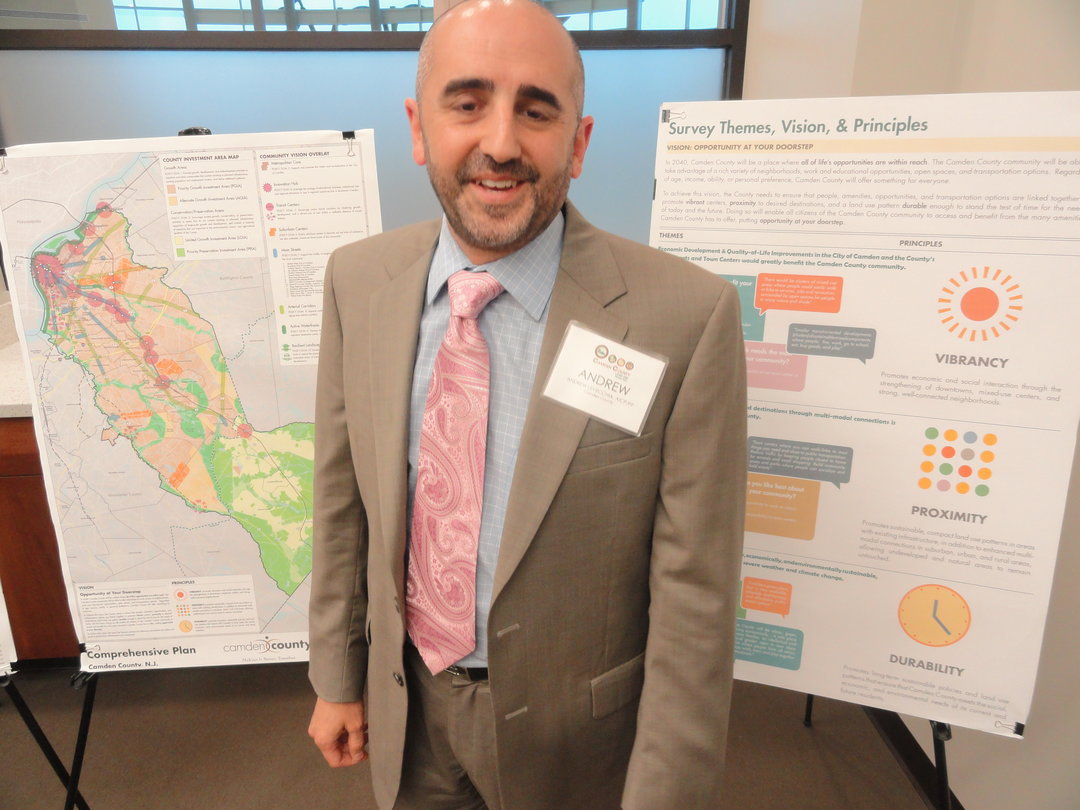 Camden County is “a comfortable place for people to live,” Levecchia said, not only for its cultural diversity and proximity to other major metropolitan areas, but also because it’s a transit hub with many, walkable downtown communities.

But most of the land in Camden County has already been developed, and much of its remaining greenspace is marked for preservation. So how can the county continue to chart a course for growth into the next 40 or 50 years?

Last year, county officials collected more than 900 responses to a community visioning survey designed to learn about residents’ priorities for the future development of the county.

Levecchia was one of the authors of that document. He sat down with NJ Pen to discuss the results of the survey, the reasons for updating the county master plan, and some ideas about what the Camden County of 2040 may look like.

NJ PEN: Why does Camden County need a master plan for its development?

LEVECCHIA: This is the first time in 40 years that the county is in the process of writing a master plan. We have 37 municipalities; [only]four have a paid planning staff. The others have consultants, and they’re good. We wanted them to have direction from a regional perspective.

The idea of our plan was to give municipalities and developers an idea of how growth can occur in areas that growth should be targeted in. Our goal was really to pick out some of the bigger centers [of the county]that were really successful and promote that style of land use. 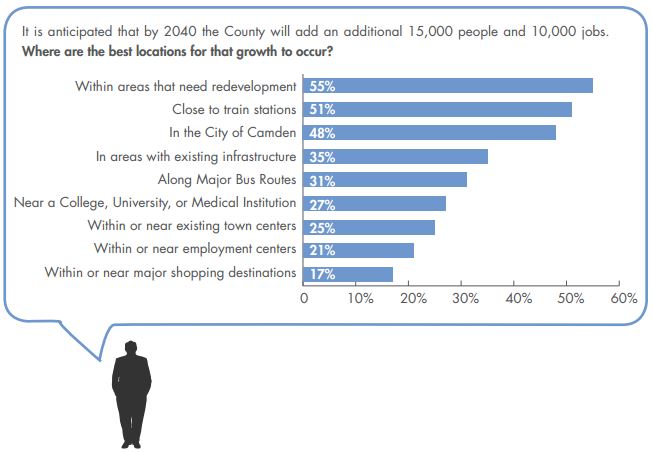 NJ PEN: How would you like to see developers and communities consider the plan in future land use?

I think people really value the environment as an amenity to their quality of life. Our natural corridors are one of the biggest [strengths]. People [here]understand the value of open space, of having a viewshed, of clean water, of having a place that’s clean and quiet. Preserving the natural environment is one of our focuses. We have a pretty aggressive farmland and open space preservation plan.

NJ PEN: When you look at Camden County from a planning perspective, what are some of its greatest assets?

LEVECCHIA: People are attracted to Camden County because of its proximity to the region we’re in. We’re closer to Center City than some of the suburbs of Philadelphia [are]. [We’re a] two-hour drive from New York, a four-hour drive from Pittsburgh, Boston, Baltimore. [It] puts us in a really good place for people to be. We’re not in an isolated area.

From a worker standpoint, the public transportation system is one of the better systems in the state of New Jersey. You have fixed rail (PATCO), the light rail (River Line), the line that goes to Atlantic City, and bus lines that go all over the county. If you can get to the Walter Rand transportation center [in Camden City], you can get anywhere in the state, and anywhere out of the state.

(Levecchia also noted that a proposed bus rapid transit system would connect Gloucester and Camden Counties with Camden City and downtown Philadelphia along Routes 42 and 55 and I-76 and 676—ed.) 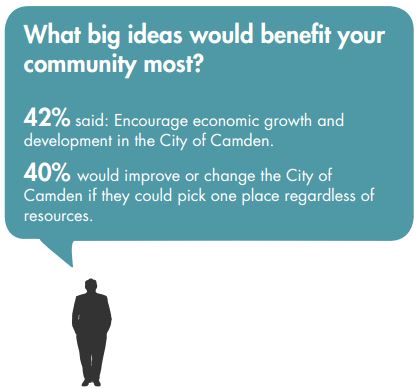 If you look at the relationship between transportation and infrastructure and job growth and commercial growth, the fact that we have a fairly new transit line and we have really good public transportation to the city of Camden, it would make one think that the resources are there for small or mid-cap companies to come and invest in the city of Camden because they can get people there relatively easily. The area has a lot of relatively well-educated individuals in the workforce that are attractive to employers.

NJ PEN: A lot of the new construction development or redevelopment within Camden County is focused on transit-oriented communities. Will that continue to be the case in the future?

LEVECCHIA: There are several transit stations within the county that are prime areas for development because of the transit infrastructure. If you look at the trends of the millennials (people born between 1982 and 2000), they’re the people that are driving less. They don’t see car ownership as an idea of independence as we did. And they see it as a burden because of the economics.

We have a number of seniors that live in the county as well. As you get older, if you don’t want to use your personal vehicle, the idea of transit-oriented-development is that if you have all your goods and services within a couple of blocks of where you live, you can get on public transportation and go anywhere.

The density of the community engages people: that old European model where you’d go to the French section [of a city]to buy bread or the Italian section to buy cheese. Re-creating that atmosphere where transit is the center of why we’re living here makes those communities that use more local resources. That changes the norm of getting in your car and driving 15 miles to go to a big-box store to get something that you need for your home.

NJ PEN: These transit-oriented developments often include some kind of commercial component. How important is that to their overall concept?

LEVECCHIA: Fifteen to 30 years ago, Voorhees Town Center was a viable mall, but you had to drive here. The mall said, “We need to change.” Instead of finding the right big-box [store]or the right retailer, they wanted to change themselves.

They’ve added housing, they’re bringing in restaurants. They’ve implanted some office and commercial space. It’s re-purposing the place to tell the public that this is a different way to use an old infrastructure that’s still viable.

Developers are trying to add more critical mass and get more businesses and people that are here from an 8-to-5 standpoint. The external stuff is a result of adding additional housing, which is changing what this place was–a sea of asphalt–to something that in the future can be used by a lot more people because there’s more people here.

NJ PEN: If you were to forecast what the county’s going to look like in the next few decades, what would be some of your safer predictions?

LEVECCHIA: I’m very optimistic about the city of Camden. I think a lot of people are working hard to make the city of Camden succeed. Through the eds and meds, through the transportation infrastructure, it’s really going to prosper in a way that it hasn’t for the last 50 or 60 years.

NJ PEN: How about a few “reach” predictions?

LEVECCHIA: I don’t think our population’s going to spike the way we would like it to spike. I think the likelihood is that people will move around within the county, but I think we’re far off from 650,000, 700,000 residents.

I don’t see our county changing much…and I guess it’s because technology is going to advance. More technology will be available for everyone: telecommuting; the ability to work from home. I don’ t have to own a car, I have more disposable income. If I live close to a transit line to get to work, I have those benefits.

I think in general we’re looking at a more technical workforce. You’re going to need technicians to service that technology, people to write the software. I think we’re in a good position to take those jobs. [Camden County has] the office space. We have the technology infrastructure. We have the educated workforce. We have good high schools, we have good colleges; we have a county college that stays on the cutting edge of educating people for the things that are needed.

We do attract a great diversity of people, [of]all education levels, all ethnic backgrounds, and all of that makes a strong community, a diverse community, and it makes it successful. We have a strong labor force [and]a strong professional force.

NJ PEN: What’s the next stage of the planning process?

LEVECCHIA: We’re going to be adopting four new elements over the summer: multi-use trail and bike plan, greenway plan, transportation, and land use. Those four plans really will provide not just a good guidance for how development should happen, but really a vision for where the county should go in the future. 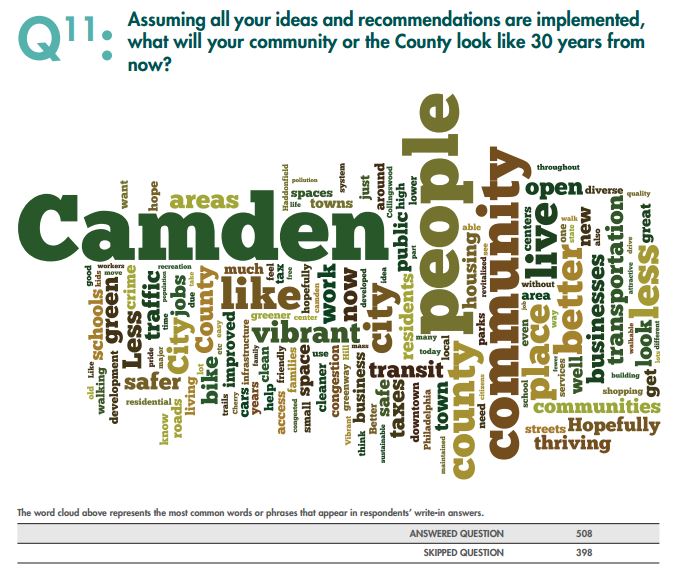