Signs advertising a race relations forum have been twice stolen from the Unitarian Universalist Church. Its organizers say the conversation needs to happen now more than ever. 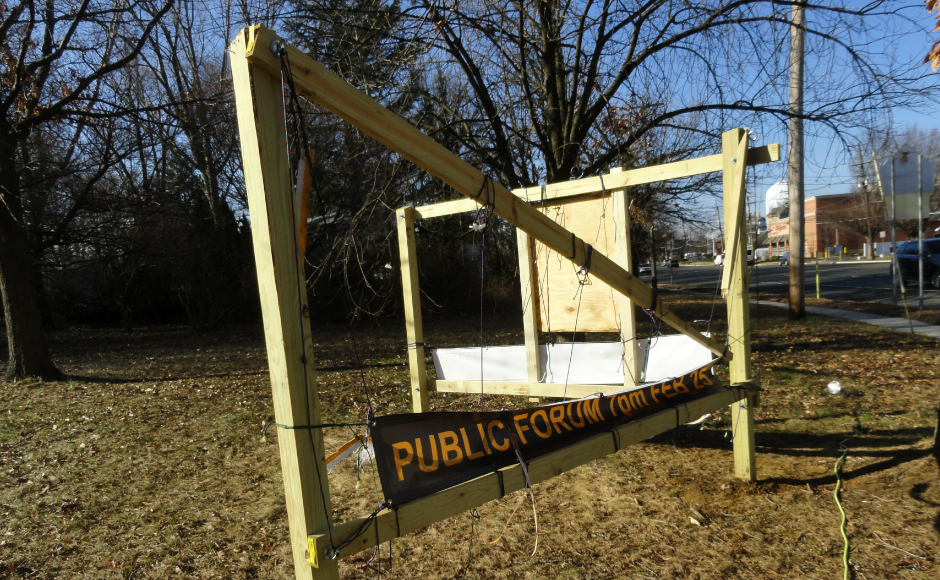 When they hung a pair of “Black Lives Matter” banners along the side of the road near their house of worship in Cherry Hill, members of the Unitarian Universalist Church (UUC) were advertising a forum intended to open a community dialogue on the subject of race relations in South Jersey.

After two sets of the banners were reported stolen from the church within a matter of weeks, forum organizers seem to have provoked the discussion they were after, albeit a few days ahead of schedule.

UUC congregants had erected a wooden framework along Kings Highway to make the banners visible to passing traffic, said Minister-in-Residence Jo Green. They were illuminated by floodlights and suspended from the frame by cord. The first time the vinyl signs were stolen, the cord suspending them was severed, but the surrounding structure was left intact. During this latest theft, the wood was shattered, and the floodlights were smashed, leading Green to conclude that the incident had more of an emotional charge.

“The first time it happened, we didn’t feel violated as much,” Green said. “I think someone wanted [the banner]; it was tidily taken down. This one was made to wreck. And they did it between midnight and 8:30 a.m.

“It wasn’t just cut down like the other one was,” she said. “There was anger and hatred against the sign. I would love to talk to the person or persons who did that to find out what is it about a sign that makes you so angry.”

Green said that her church is not alone in having “Black Lives Matter” banners ripped down; she said one UUC site in Reno, Nevada has replaced 13 of them. Closer to home, the UUC church in Galloway Township has replaced one as well. Green believes those reactions to be related to the discomfort of discussing race relations in America.

“It’s not a southern thing, it’s not an urban thing, it’s not a rural thing,” she said. “It’s happening everywhere. We’re still a divided nation since the Civil War. We haven’t resolved those emotions or we wouldn’t be having these reactions.”

Green acknowledged that hanging a banner with such a message carries political implications, but she insists its intention was to invite conversation, not confrontation.

“I think people see it as confrontational; we see it as opening our hearts,” Green said. “There might be some folks out there who are feeling unsettled or uncomfortable and who don’t know why. Those folks can come and talk to us.” 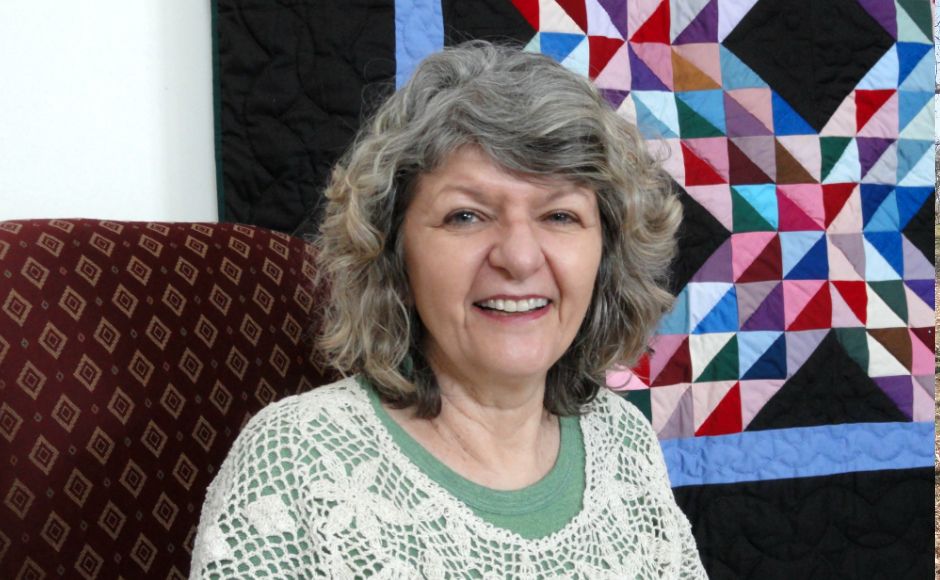 Congregant Rohn Hein, an organizer of the event, said its intention is to generate public discussion about “the underlying issues” behind the Black Lives Matter movement in a community that he feels is open to talking about it.

“Being a white church in a highly affluent suburb, a lot of people feel they’re a bit separated from these issues, but those issues are around us in everyday life,” Hein said.

“We’re trying to get people to understand the complicity that we all have in minimizing the way black lives have been lost,” he said. “You think it’s ‘their’ problem over there. It’s not ‘their’ problem. It’s our problem.”

Hein said he was saddened but unsurprised that the signs had been stolen, and added that he wished people would “participate in this conversation” instead of committing “drive-by vandalism in the middle of the night.” He shared Green’s impression that the theft was motivated by fear and anger at the concept of examining race relations more than any attitude of active discrimination.

“It’s hitting too close to the nerves,” Hein said. “When people react strongly to anything, there’s something going on. My guess is that most people are not active racists, and yet some of the things that they do and the attitudes that they have, when looked at through black eyes, can appear very racist.”

Hein was also careful to say that he doesn’t believe that talking about race and power is a substitute for problem-solving, and added that the intention of the church’s outreach is not to be “a paternalistic big brother” to the black community. But he does believe that questions of white privilege in America are best examined in the context of minority experience, and with the help of people of color.

“We know we don’t have all the answers, but we do know we can provide a forum where these answers can be discussed,” Hein said. “We’re led by our faith to say all humans deserve dignity. It takes some hard work from individuals to begin to take a look at their own actions.”

Pennsauken Deputy Mayor Rick Taylor, a panelist in Thursday’s discussion, said the outreach from the church “took a lot of guts” to spell out in a banner, especially because the sentiment inspires a number of responses. The most common of these is “All Lives Matter,” which Taylor said is a misinterpretation of the issue.

“If you’re going to have that attitude, how are you going to repair it?” he said. “You’ve already blocked out any rationale to understand how somebody else feels in a certain situation.

“You’re not saying that other lives don’t matter,” Taylor said. “That’s not it. When you look at the inequities that happen with people of color…unless you’re a minority, you don’t know how that feels.

“We need to move in the direction where we respect all lives,” he said. “Unless you address these things, there’s never going to be a solution.”

Without attempting to bridge the gulf in cultural experiences at the root of those reactions, Taylor said the gap in racial understanding will only widen. He believes an environment of mistrust between whites and blacks or police and civilians only makes both sides more nervous in a confrontational situation. Taylor also preached caution in dealing with such situations and emphasized finding the appropriate opportunities to resolve them.

“I feel pretty safe being stopped in Pennsauken because most of the police officers know me,” Taylor said. “But if I’m in another town and I’m stopped, believe me, I’m going to do everything that police officer tells me to do because I’m not going to give him any reason to react to me in a negative way. I may not like the way I’m treated, and I might be in that police station the next morning with an attorney. But I’m not going to take issue with him on a dark road.

‘We don’t historically have those issues here’

From a police perspective, law enforcement can mistake non-compliance with an intent to harm, and react out of fear for self-preservation, he said.

“I think that’s what people lose sight of,” Monaghan said. “When a person’s not listening to the lawful order of a police officer, that now raises the level of that interaction to a higher level. You’re now causing that fear that that officer may feel in jeopardy of their own safety.”

Monaghan said that the safest way to resolve any such encounter is to approach law enforcement “after that situation has de-escalated.” He stressed that every New Jersey police department has a clear process for fielding complaints of officer misbehavior, and an obligation to report and investigate every such incident.

“Those mechanisms to grieve your treatment are there,” the chief said.

Monaghan said that police do not consider the thefts of the banners to be a bias incident because no threats of violence or intimidation were levied against the church or its congregants in connection with the act. He also said that the township does not have a history of discriminatory crime. According to the New Jersey State Police Uniform Crime Reporting Index, the township last suffered a bias crime in 2011, when statuary at a pair of Catholic churches was damaged, according to The Philadelphia Inquirer.

“We’re treating it as an isolated incident,” Monaghan said. “We don’t historically have those issues here. This department is deeply rooted in the community.”

Although congregants at the church may have intended their conversation to be an examination of white privilege, the “Black Lives Matter” message carries an implicit criticism of police tactics that Monaghan said rankles officers who perform their duties with professionalism. The chief has taken strides to create a diverse police department in Cherry Hill, even opening up its hiring processes to public scrutiny, to combat that perception.

“We have a great relationship with different civic groups throughout the community,” Monaghan said. “Part of our mission is to protect life and save life regardless of who the person is. We value life, and everyone’s life. The majority of police officers are good, and we’re here to do good.”

Monaghan called the incidents “a negative cloud on the community” and promised increased, focused patrols on the area.

“It’s disheartening,” he said. “Hopefully it’s isolated and it stops.”