Firefighters from throughout Camden County battled cold, windy conditions and limited access to suppress a fire that damaged multiple homes in the unit block of Bellevue Terrace. No injuries were reported. 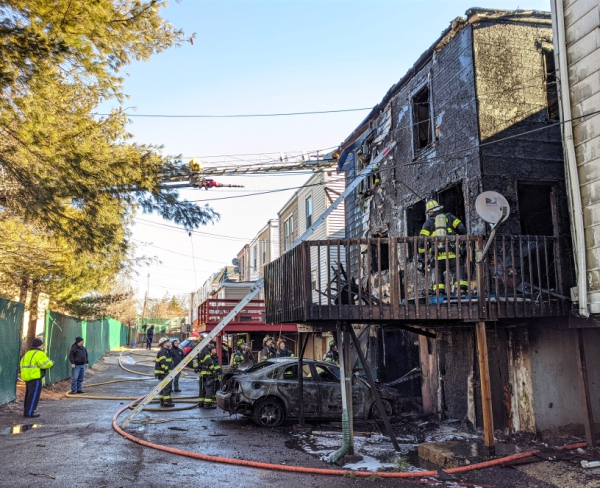 A car that caught fire in the rear of a Bellevue Terrace home set three properties ablaze. Credit: Matt Skoufalos.

A three-alarm fire in Collingswood damaged five homes on Bellevue Terrace and displaced an undetermined number of residents Tuesday morning.

First responders from a dozen fire companies jammed a block of Haddon Avenue and closed off the narrow, one-way street at both ends as they battled chilly, windy conditions and limited access to suppress the flames.

Collingswood Fire Chief Keith Davis said that firefighters saw heavy smoke from a home in the unit block of Bellevue Terrace when they arrived.

They traced it to a car that was fully ablaze under a deck in the rear of the property. The fire extended from the deck into the house, escalating the incident to an all-hands call on the block of row homes.

Bellevue Terrace neighbor Ruben Guio said he saw the car explode after it had caught fire.

“When I walked back there, the wind was blowing the fire through the house,” Guio said.

“I was ready to put it up for sale before this,” he said. “Something told me to get out of here.” 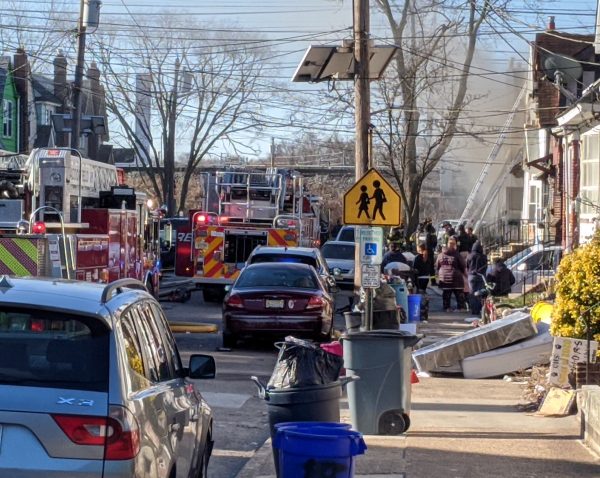 They contended with garbage day on a narrow roadway full of parked cars, including one that was blocking access to a fire hydrant, and positioned apparatus in the parking lot of nearby Cattelli Brothers to extinguish the flames from the neighboring property.

The fire was knocked down pretty quickly, Davis said, but not before it had extended into the common attic space of two neighboring units.

In total, three homes were damaged by fire and five by smoke.

“The companies made a great effort and a great stop,” the chief said. “This was a difficult fire to fight.”