The incident occurred outside the Wawa on the White Horse Pike Tuesday afternoon and diverted traffic for 90 minutes. Victims reportedly sustained minor injuries.

A multi-vehicle accident on the Oaklyn-Haddon Township border sent six people to the hospital with minor injuries and shut down the White Horse Pike in both directions for an hour-and-a-half.

An official report was not immediately available from Haddon Township police, but authorities reported three cars were involved in the accident, which occurred in the area of the Wawa parking lot around mid-day Tuesday.

One minivan was reportedly driven by an elderly man; another woman was driving her car alone, and a second minivan held four occupants, including two juveniles.

“We helped EMS get people out of the car and clean[ed]up the road,” Cairns said.

‘People need to be more aware of the area’

Without commenting on the specifics of Tuesday’s accident, Cairns said navigating the area around the Wawa can be complicated.

Business driveways feed into the pike, traffic crosses the major artery in several places, and although the roadway is only one lane in either direction, drivers “will go around other cars waiting to turn.

“That contributes,” he said.

“The Haddon Township streets and the Oaklyn streets on the opposite side aren’t exactly across from each other, so it creates more places for people to enter the road,” Cairns said. “It kind of creates multiple points of entry.” 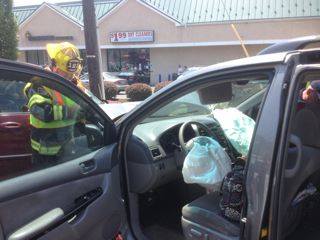 Although authorities report that accident victims sustained only minor injuries, the force of the collision was enough to deploy the vehicle airbags. Credit: Curt Hudson.

“People need to be more aware of the area,” he said.

That area of the White Horse Pike was also the scene of a fatal accident little more than a year ago, when a 66-year-old pedestrian was struck and killed crossing the street.

Lavon Phillips of the nearby SoHa Arts Building said that although the road carries a heavy volume of traffic –almost 20,000 cars a day—he doesn’t consider it a danger to pedestrians.

“It’s not a heavy foot traffic area, like Collingswood,” Phillips said. “They’ve got a light.

“We walk over there [to Wawa]all the time.” 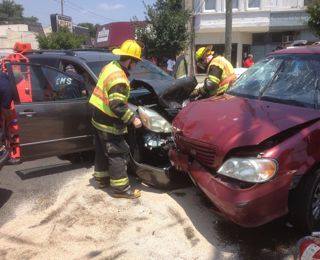 Oaklyn firefighters clean up the road after a three-vehicle accident on the White Horse Pike on Tuesday. Credit: Curt Hudson.