After a two-year redevelopment, the former Mr. Roberts Lumber Center begins its new life as a state-of-the-art craft microbrewery and tasting room this weekend. 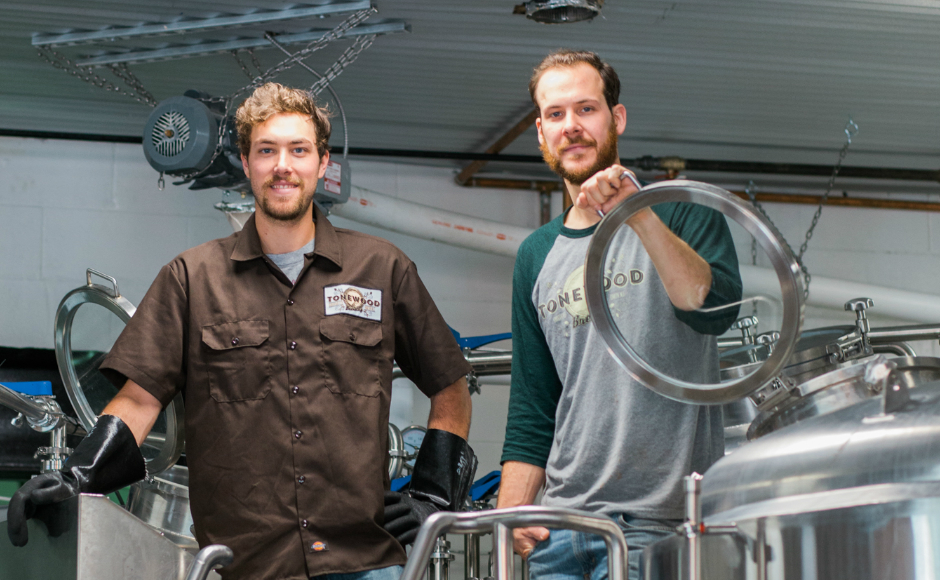 Taylor (left) and Eli Facchinei in May 2016. Credit: Tricia Burrough.

In May 2016, brothers Eli and Taylor Facchinei poured the first beers at Tonewood Brewing, the first craft brewery in Oaklyn.

On Saturday, they’ll raise the first pints in the first craft brewery in Barrington, just three miles down the road.

In less than six years, the downtown microbrewery that the Facchineis established in a 3,000-square-foot warehouse on West Clinton Avenue has grown into a community favorite, owing as much to its reliable selection of styles as to its welcoming atmosphere.

Now they’re ready to scale the whole thing up—and into a purpose-built production space designed to be a model of sustainability for craft brewing.

“I think people may have not gotten this facility five years ago,” Eli Facchinei said. “I wouldn’t have. We never could have just jumped into something like this here.

“[Barrington]  is designed to allow us to hyper-focus on the process so we can really dial everything in and improve the quality of our beer.” 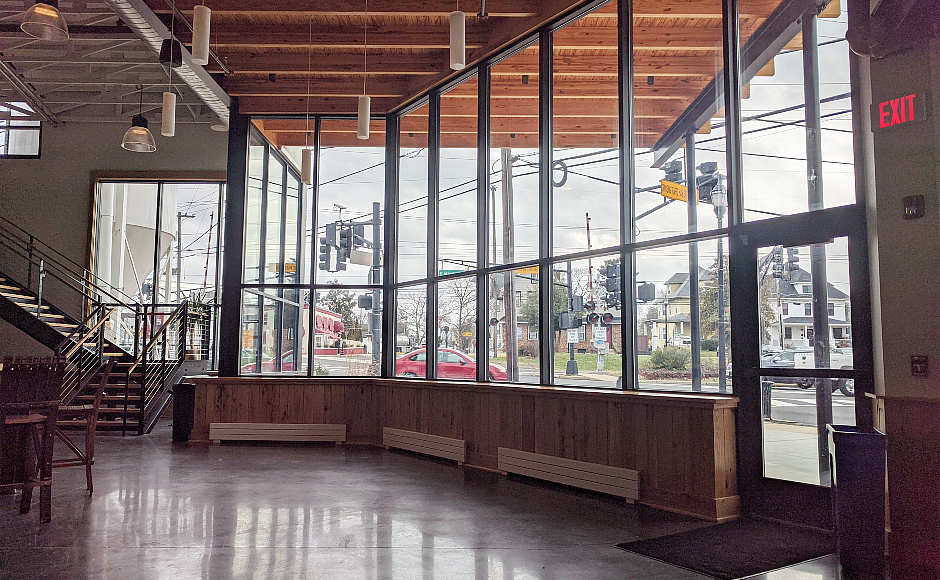 The family spent two years remodeling the century-old Mr. Roberts Lumber mill into a high-efficiency manufacturing and retail space that acknowledges the long chain of production behind every glass of beer, and works to mitigate the environmental impact of its process.

The facility is powered by a 230-kilowatt rooftop solar array.

Its building envelope is insulated and air-tight, lit by digitally controlled, energy-efficient LEDs.

Perhaps most significant, however, is the system that recaptures carbon dioxide (CO2) from its fermentation process and redirects it to carbonate the beer instead of off-gassing it into the atmosphere.

Closing that loop means the brewery won’t have to purchase bulk CO2, “which is typically a byproduct of petroleum processing,” Facchinei said—and if Tonewood collects more than it can use, there are potential customers in indoor farming. 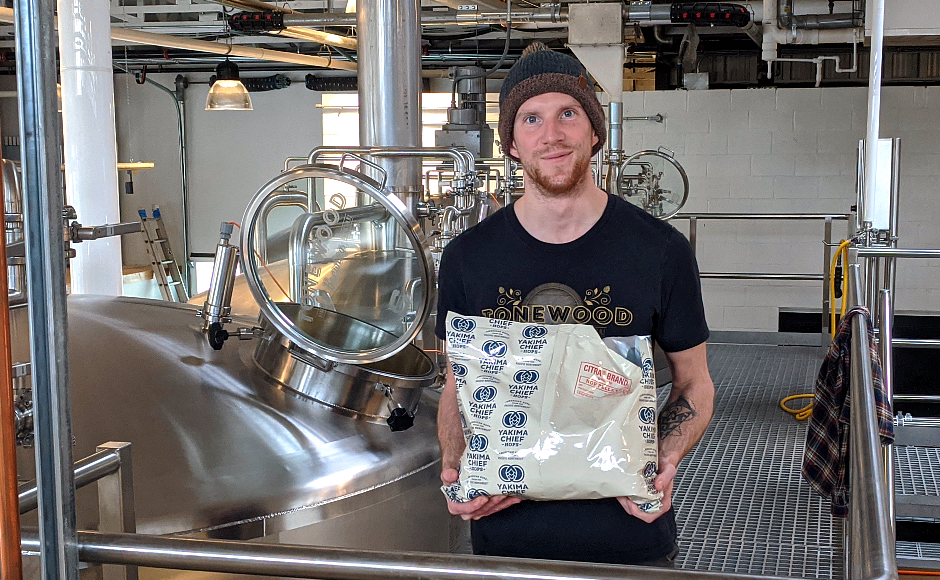 Although the Barrington brewery can double the output of Tonewood’s operations in Oaklyn, Facchinei says its initial goal is to produce the same volume of beer, at a higher quality, and using 30 percent less water, energy, and raw materials.

“That goes a long way with refocusing our path forward towards being truly sustainable,” he said.

Along with the increased capacity that the Barrington location affords, it also will enable brewers at the Oaklyn location to focus on more complex mixed-culture and barrel-aged beer recipes.

“We’ll be able to take the facility from bursting at the seams to try and keep up with production and make it a more intimate, barrel-room location,” Facchinei said.

“We’ll be able to get more oak barrels, more foeders, and be able to produce canned conditioned saisons.”

Aesthetically, the Barrington facility reflects a continuation of the industrial-lodge feel Tonewood established in Oaklyn, with glass, steel, and live-edge wood elements. Facchinei described Oaklyn as “retail meets production,” and while Barrington doesn’t completely separate the two, observing the brewing process is central to the retail customer’s experience. 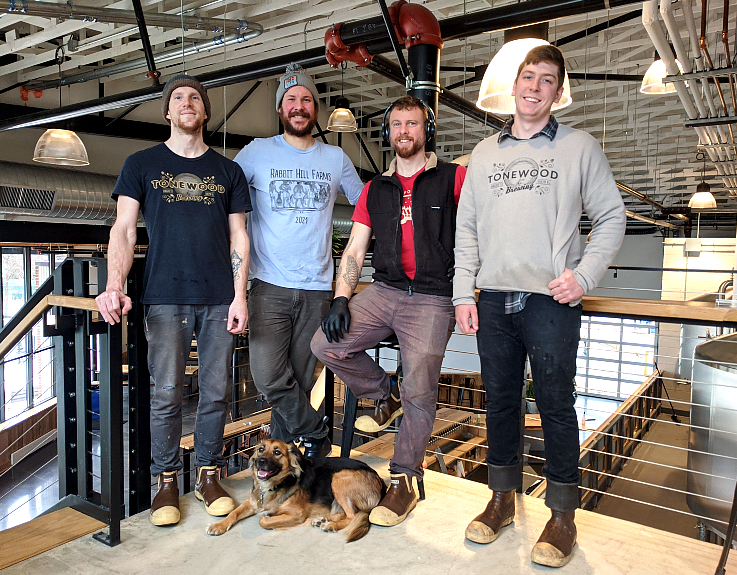 The brewhouses overlook the front-of-house bar, which unfolds into a sizable beer hall constructed from the space that once held the front offices of the former lumberyard.

Guests can socialize at shared tables that line the front room, grab a seat at the bar, or find their way to outdoor patio areas.

Folding glass panels and garage doors are adjustable to accommodate the weather.

Rising above brewery operations is an observation deck overlooking the rest of the warehouse, and fitted out with smaller tables.

It’s at once secluded and open, and offers a view of industrial activity at a scale unfamiliar to most patrons.

“We still wanted people to feel connected to the brewery; up and close to the action,” Facchinei said. “It allows us to have that experience but still be efficient in manufacturing.

“Some days you’ll be able to see the canning line, the brewers on the brew deck, guys in the cellar moving around, and really connect with the process,” he said. 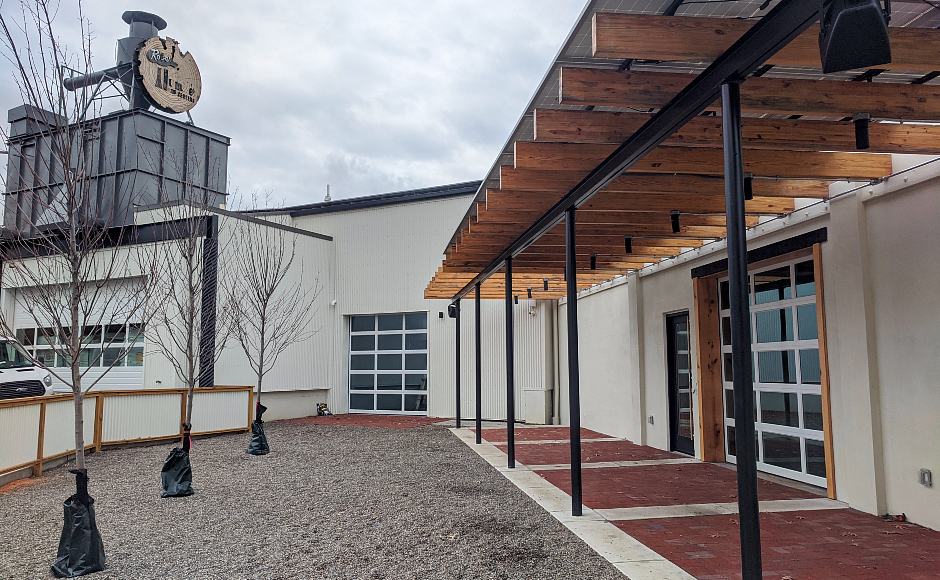 Facchinei credited a number of small South Jersey businesses with helping get the project completed, including Grabowski Plumbing of Cherry Hill, South Jersey Industrial Contractors of Runnemede, Smith Electric of Oaklyn, Rich Musciano Painting of Oaklyn, and The Factory of Collingswood.

He reserved his deepest gratitude, however, for his father, Jim, and uncle, John, who worked with him throughout the construction.

“None of this would have happened without Jim and all of our carpenter friends and family who came together to do the project with us,” Facchinei said.

“It was literally a blood, sweat, and tears project in all senses of the word,” he said. “Everyone definitely has put in their time to make this happen.”

As the business finds its footing in Barrington, Facchinei said the crew there will work to leverage the advantages of the new facility in continuing to grow the Tonewood brand.

When they opened the original facility in Oaklyn, craft brewing was relatively new to Camden County. Now they’ve gone from introducing their product to new audiences to expanding their customers’ understanding of what a sustainable craft brewing business could be. 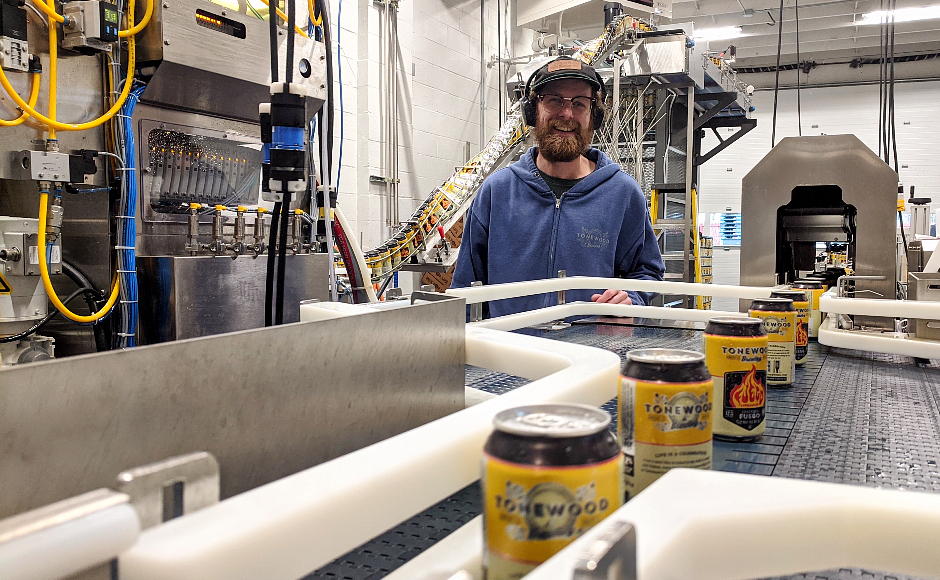 To Facchinei, that means underscoring its commitment to “quality, community, and sustainability.

“Quality of beer, quality of life,” he said.

“And then doing the right thing when it comes to the future and our brewery’s impact on the environment,” Facchinei said.

“We learned a lot in building and running Oaklyn,” he said. “We’re just really excited to add that knowledge, and we want to keep building and keep learning.”

Tonewood Brewing will host the grand opening of its Barrington facility from 12 noon to 10 p.m. January 22.