Trending
You are at:Home»People»VIDEO: Dousing the Embers of a Movement at DNC Philly

What’s the difference between seeing an American flag burned in a video and watching someone light one up in front of your eyes? 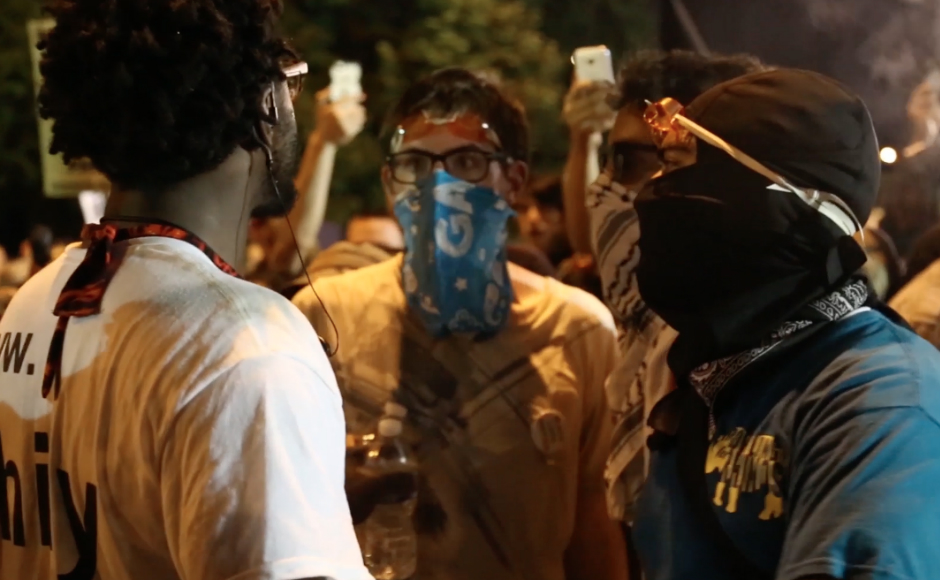 A demonstrator steps in to confront masked protesters at the DNC in Philadelphia. Credit: Steve Patrick Ercolani.

PHILADELPHIA—Surrounded by men who hid their identities behind Guy Fawkes masks and the folded triangles of cloth bandanas, Erin Reagan first distinguished herself from the crowd by allowing her face to be seen.

Not far beyond was the Wells Fargo Center, inside which Hillary Clinton had just become the first woman formally nominated for the office of president by a major American political party.

Her opponent, Vermont Senator Bernie Sanders, gave Clinton a full-throated, if not slightly uncomfortable endorsement, calling for “leadership that brings people together and makes them stronger,” even as his supporters showed their disgust with his resignation.

Outside, where the steel barricades were growing warm to the touch in the July heat, Sanders’ supporters marched, generally peacefully, their call-and-answer chants ringing throughout the massive, vacant parking lots. 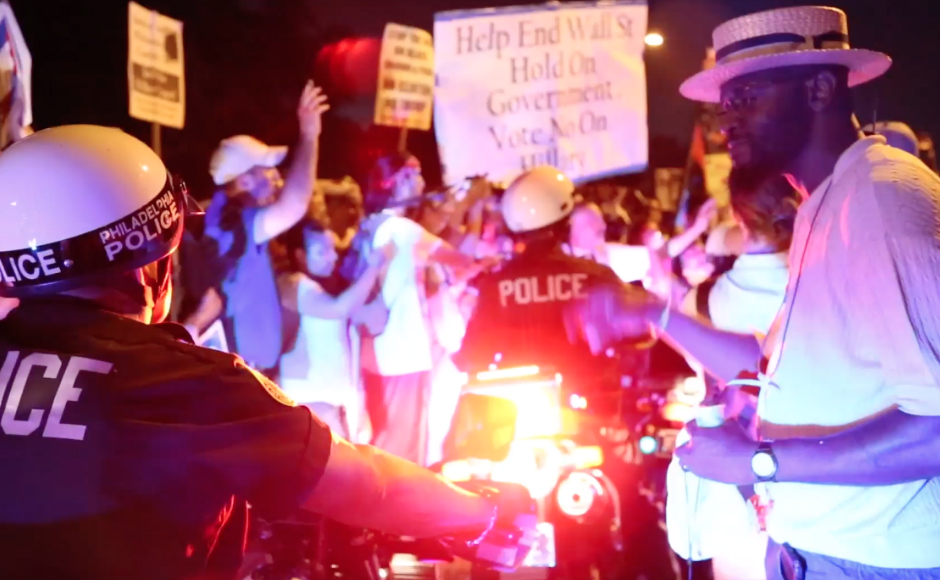 A few would refuse to console themselves with slogans.

One of the men lit the fire with a cigarette.

The smoke from dollar-store placards, handwritten letters to Sanders, and fliers from the Workers World Party rose as a line of police officers watched from behind concrete stanchions and tall, metal barricades.

Suddenly, the red-and-white ribbons of the American flag hit the flames.** A woman nearby let out a blood-curdling scream. Reagan stepped forward to pour out her water bottle over the flames. She’d seen a flag burned in pictures, on television, on the Internet; but “certainly not right in front of me,” Reagan recalled after, “where I could do something about it.”

Whether the intensity of the incident or her reaction to them had provoked the response, a handful of the men snarled, and for a second, the moment looked as if it might get deteriorate. Another protester stepped up to intercede. 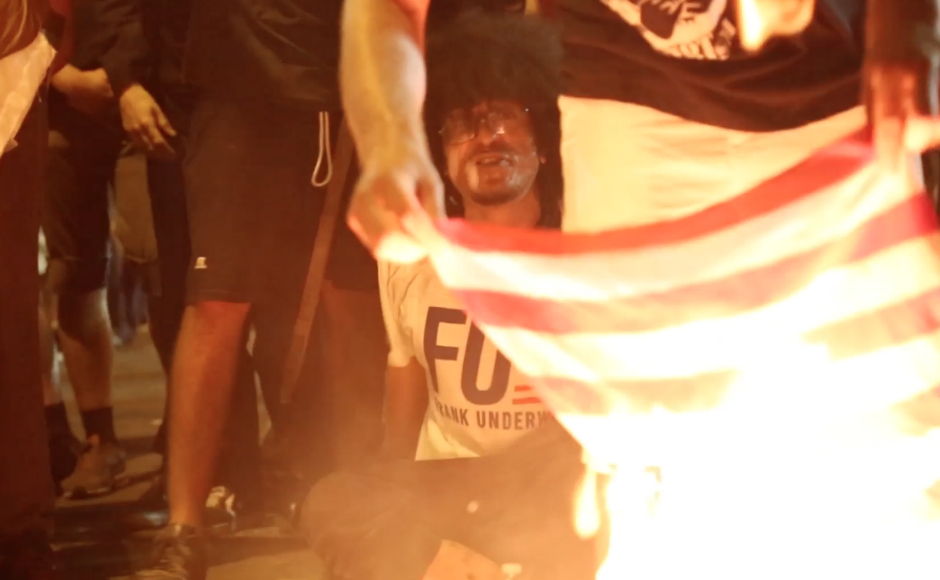 Sanders supporters ignite an American flag after their candidate is defeated in the primary. Credit: Steve Patrick Ercolani.

“It only takes a single frame of a video, or one picture and a headline, to cast every single person here as one group ‘who were all here just to burn a flag,’” Reagan said.

“We need to represent everybody’s views, not just the views of a few people, and one who happened to have an American flag in their pocket.”

Other protestors marched on, unlit flags adorning their backpacks.

From the back of a pick-up truck, a woman tossed bottles of water to the crowd in the stifling summer night.

Dousing the embers of a small garbage fire in the parking lot was easy. Throwing cold water on a political movement that had been given plenty to protest by the actions of its own party was proving harder to do.

Haddonfield native Steve Patrick Ercolani is an independent journalist and the director of Pyne Poynt, a documentary about the North Camden Little League.

**CORRECTION: An earlier draft of this story identified the woman whose voice is audible in the video above as Erin Reagan. Reagan has since said that she doused the fire with her water bottle, provoking a reaction from the protestors who set the fire, but that the woman heard on the video was a fellow protestor next to her.