On the 50th anniversary of the Vietnam War, the American Veterans Traveling Tribute Wall marks the centerpiece of a four-day weekend for Camden County military veterans and their families. 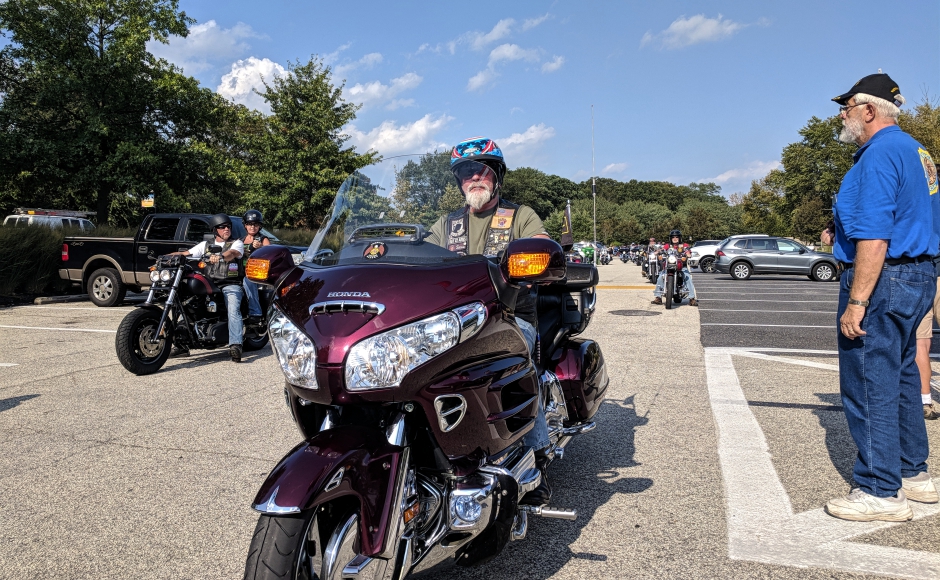 The motorcade roared into the parking lot at Cooper River Park a little after 4 p.m. Wednesday, colors flying, tailpipes rumbling.

Their cuts bore the insignias of the Warriors’ Watch, the Centurions, AMVETS, the Nam Knights, and others.

Escorted by Cherry Hill Police along I-295 from Paulsboro, a 24-foot hauler carrying the American Veterans Traveling Tribute Wall (AVVT) followed right behind.

Six-feet-tall and 360 feet from end to end, the portable monument is an 80-percent scale replica of the Vietnam War Memorial in Washington, D.C. It bears 100 percent of the names that adorn the original.

Starting at 8 a.m. Thursday, some 20 volunteers will assemble the wall at Veterans Island in the park. Others will stand watch over it 24 hours a day; more will break it down and pack it away for its departure at 3 p.m. Sunday.

It’s all part of a four-day commemoration of the 50th anniversary of the Vietnam War. Organized by the Camden County government with donations from various supporting agencies, the event seeks to remember the fallen, celebrate the living, and support those veterans living with the legacies of their military service.

Cherry Hill Mayor Chuck Cahn, who observed the arrival of the motorcade Wednesday afternoon, said he hopes the weekend program offers an opportunity for those who’ve never been to Washington, D.C. to experience the significance of the monument in person.

“I’m excited that we could have [the AVVT]  here and represent all the vets,” Cahn said. “Hopefully, hundreds of people are here to pay their respects.”

Cahn remembered being issued a draft card in the last year of the Vietnam War; the final lottery was held that March, and Saigon fell in April. Nevertheless, the conflict “was a reality” for several of his friends.

“Those that served did it for this country regardless of the politics involved,” the mayor said. 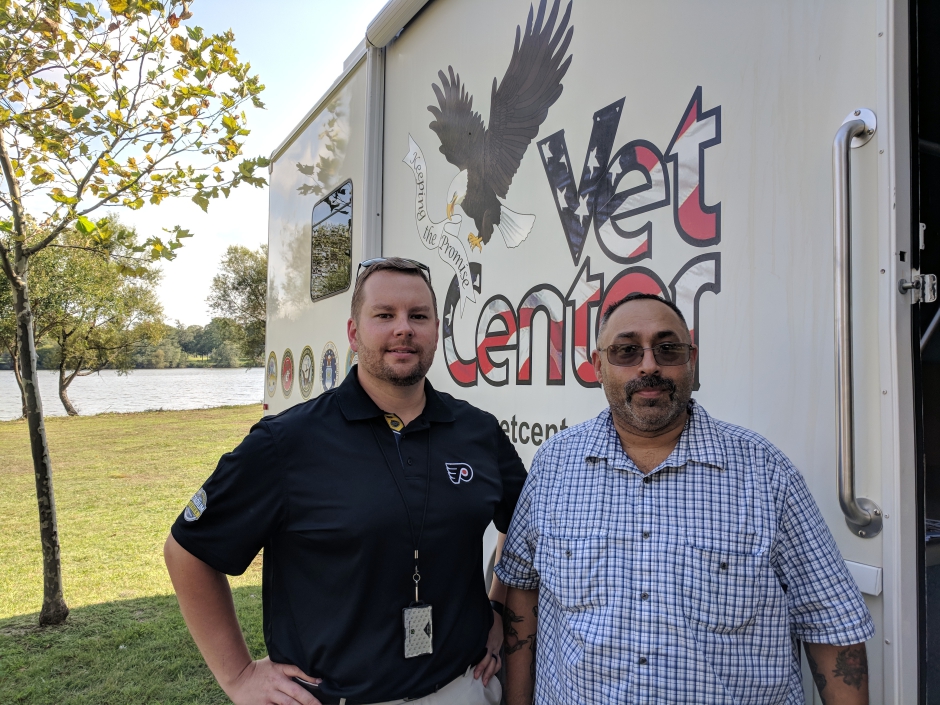 Veterans outreach specialist Ed McEvoy and readjustment counseling technician Gerry Ferra, both of the U.S. Department of Veterans Affairs (VA), will man the Vet Center, a mobile counseling vehicle, at the event.

“Vets go up to the wall, they start to break down because they see someone they lost,” Ferra said.

“We can scoop them up, and they can have a session with a licensed counselor.

The Vet Center offers mental health counseling for war-zone veterans, their families, and victims of sexual trauma during military service. The majority of people it serves are Vietnam veterans, McEvoy said. They didn’t get the same kind of mental health services he did after two tours with the U.S. Marine Corps.

“I used the Vet Center in South Carolina,” McEvoy said. “Changed my life.”

“I was driving 5,000-gallon fuel trucks in Fallujah, Najaf, Kirkuk, Baghdad, Anbar Province,” he said. “I saw my share of death and destruction in my tour of duty; enough to last a lifetime. I was able to get help through the vet center.”

Lately, soldiers who’ve been to Iraq and Afghanistan are starting to come in; McEvoy said he’d like to see more of them.

“Our main focus is readjustment,” McEvoy said. “We want to help [veterans]  become the people they were before they joined the military.”

Bernie Kofoet of Pennsauken, historian of the Camden County American Legion, said there are 22,000 U.S. military veterans in Camden County. Another 89 soldiers who were killed in Vietnam called Camden County home.

Kofoet, a former U.S. Air Force staff sergeant and machinist, considers himself “a Vietnam-era veteran rather than a Vietnam veteran” because he served domestically. 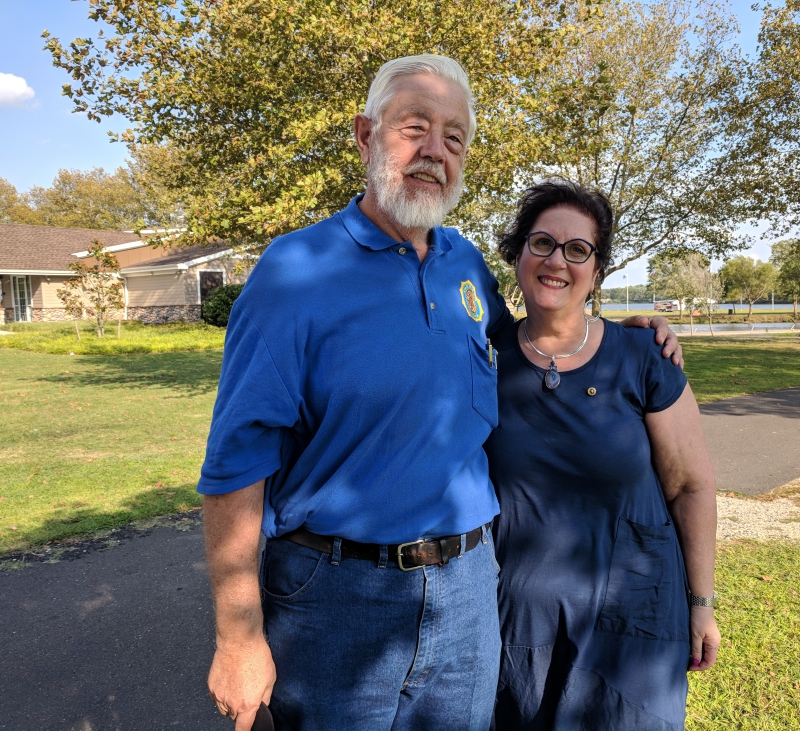 “I have a special place in my heart for those guys who went over and slept in the jungle and were exposed to Agent Orange,” Kofoet said.

“I wasn’t spat on and called a baby-killer.”

Kofoet hopes the four-day celebration would hold significance for any former soldier by offering acknowledgment of their efforts.

“[For veterans and their families] to realize that there’s people who care about their service, it’s important,” he said.

Camden County has programs and services to honor its returning veterans and Gold Star families, but for the memorial event, the county has created a special Vietnam veterans challenge coin, Kofoet said.

The weekend will include a pinning ceremony for veterans and their families on Friday, as well as a vigil for those killed and missing in action. Saturday brings a resource fair and kids’ activities in the park as well as a performance by Gary Puckett and the Union Gap, and the weekend concludes with a 9/11 Heroes Run on Sunday. All events are open to the public.

Camden County Freeholder Melinda Kane, herself a Gold Star mother, said some 300 people have pre-registered for the pinning ceremony, and more are anticipated.

“We expect it to be emotional,” Kane said. “We hope it’s healing. We hope it’s educational for people who were not of the Vietnam era.”