Even before the results are tallied, the 2020 general election will bring big changes for voters. We spoke with Camden County Deputy Clerk John Schmidt about what’s different this year. 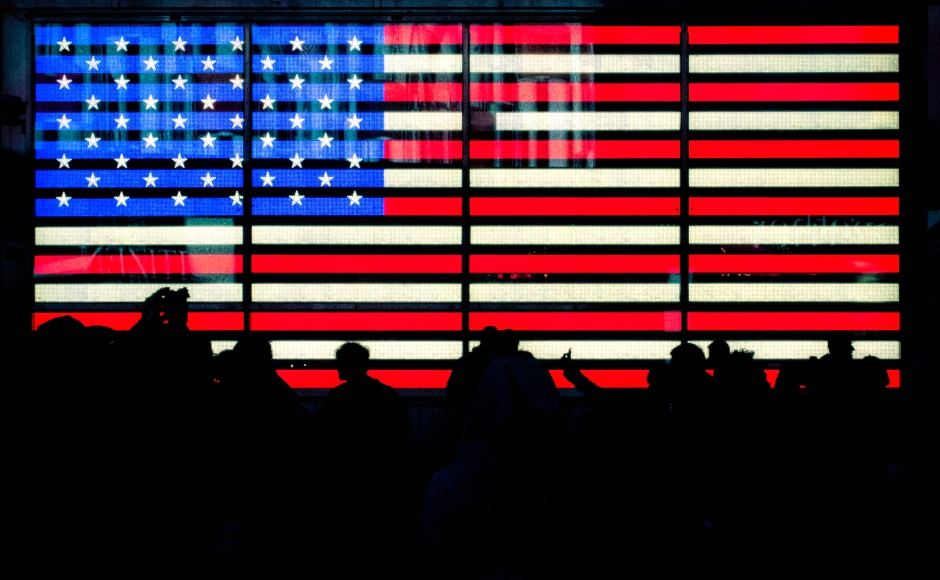 Since New Jersey Governor Phil Murphy announced that the 2020 general election would be conducted largely by mail due to the novel coronavirus (COVID-19) pandemic, voters have been working to keep up with the changes.

In an effort to clarify the process, Deputy Camden County Clerk John Schmidt offered some insight into the way ballots are distributed, collected, and tallied, along with efforts to preserve the security of the process.

“This is going to be the first time a lot of people have ever voted a paper mail-in ballot,” Schmidt said. “The voter education part is critical. We’re trying to make it as simple as possible.”

Historically, in Camden County, presidential elections have seen a 60-70 percent increase in turnout over other elections Schmidt said; they bring out some 370,000 voters.

Of those, about 30,000 to 40,000 may be considered “inactive” because their address is in question. That can happen if election mail sent to their address is returned by the U.S. Postal Service as undeliverable, or if they moved without updating their address.

Inactive voters will be notified by mail that their registration has been inactive and must be updated. If they don’t revise their information with the county, they may still present identification at the polls and cast a provisional ballot in person. 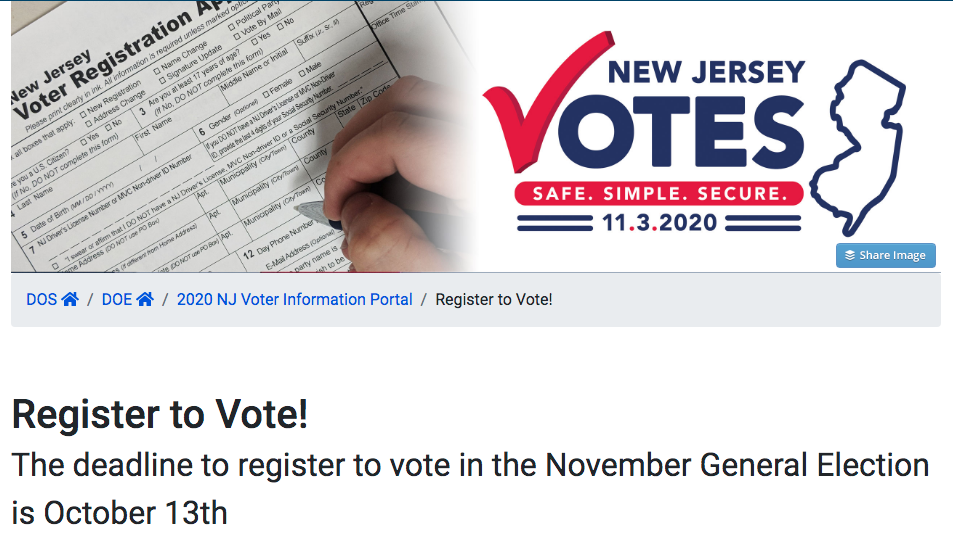 What’s the deadline for voter registration?

New and unregistered voters have until October 13 to file their information with the state electronically or on paper.

Registered voters automatically will receive mail-in ballots at their addresses of record.

The first mailing of 57,000 ballots went out to Cherry Hill residents last week.

In total, 340,000 ballots in 45 different styles will go out to registered voters in the county over the next few weeks, mailed in order of the most populous municipalities to the least.

What happens when a mail-in ballot is received?

First, the outer label of the ballot is opened and scanned by a bar code reader. The scanner flags any ballot for which it’s already registered the bar code, or any bar code not in its system.

“That’s the initial safeguard to prevent additional voting or voting by people who did not have a ballot,” Schmidt said.

Then the ballots are sorted, and their signatures are checked by elections officials to confirm that they match what’s on the flap.

For this election only, the flaps are allowed to be stripped 10 days before Election Day; once that’s done, the ballots are mixed up by municipality to assure voter anonymity. 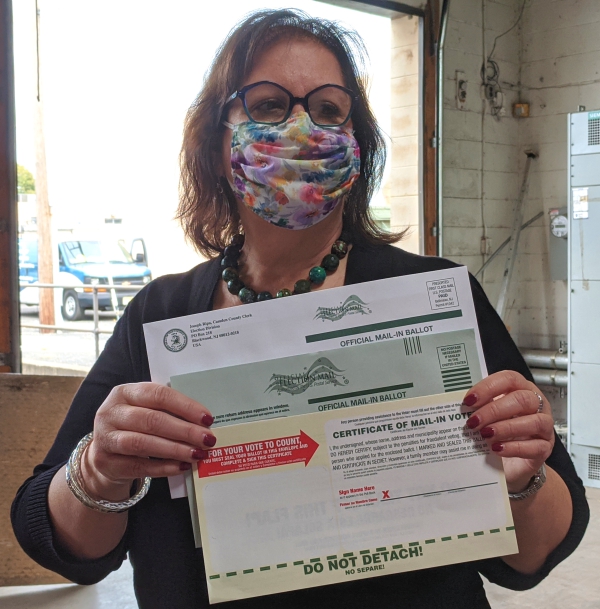 On Election Day, the paper ballots are processed through seven high-speed scanners that tabulate the results and generate a report.

An image of each ballot is captured, which helps adjudicate write-in candidates.

It also picks up any stray marks on the ballots that election officials might have to review to determine voter intent.

“If someone filled in a circle, but wanted to change their mind, they might cross it off, or draw in a big X, or circle it, or draw an arrow and point to the other one,” Schmidt said.

“It’s up to the board to determine.”

Revealing any of the results of the vote before they are officially disseminated is a third-degree crime subject to a fine of as much $15,000 and/or five years in prison.

Even though some voters have expressed concerns about ballot security during a mail-in election, Schmidt said paper ballots provide individual verifiability that the county’s electronic voting machines don’t currently offer.

Paper returns will be automatically audited during this year’s process, and can be recounted as necessary. Comparatively, Camden County’s electronic voting machines have no paper trail, were built on 1980s computing power, and are “at the end of their useful life,” he said.

“The advantage of our machines is that they’re old enough that it’s very difficult to hack them,” Schmidt said. “When they are replaced, we’ll have to go to a paper ballot anyway.” 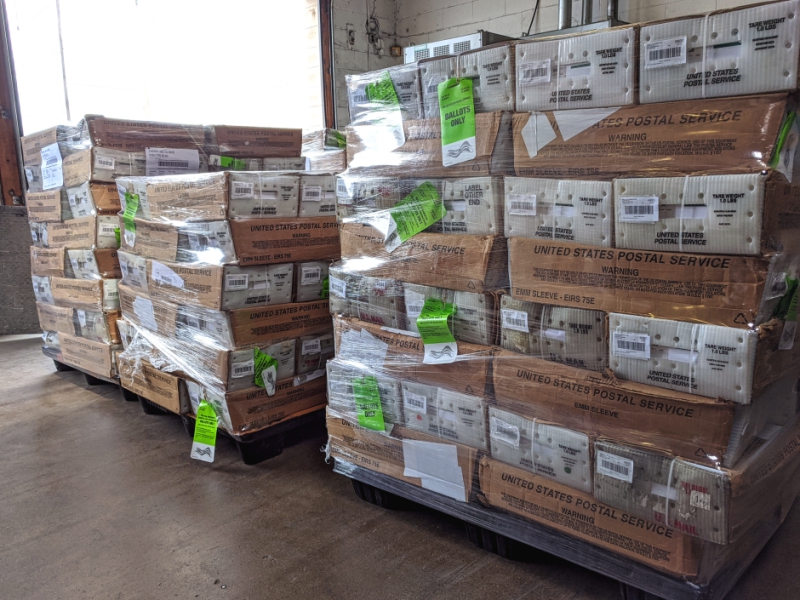 Will every ballot be counted?

Some voters worry that their ballots won’t be counted if they don’t vote in person.

Schmidt said that is a myth.

“Every ballot has always been counted, whether it be provisional, vote-by-mail, machine ballot; even emergency ballots, they’re all counted,” he said.

“None of the backbone of the election process has changed with respect to how they’re counted,” Schmidt said.

“Votes-by-mail have always been counted first; provisional ballots have to be counted last,” he said.

The only difference during the 2020 election is that ballots cast in New Jersey polling places will be treated as provisional, and therefore will be tallied at the end of the vote.

Camden County officials will notify mail-in voters of the receipt of their ballots with a postcard (as a nicety, they include stickers that say “I Voted by Mail”). 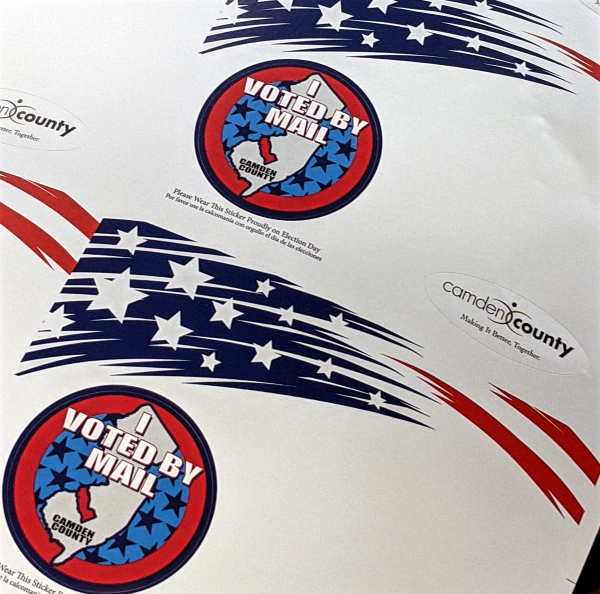 Camden County will mail stickers to voters who cast their ballots by mail. Credit: Matt Skoufalos.

Will mail-in ballots arrive on time?

For those voters who fear that their ballot will be delayed if submitted by mail, Camden County has installed 13 drop boxes to accept hand delivery of ballots.

Each drop box is monitored by security cameras, and contains a locked, sealed transfer container that’s emptied daily by one Democrat and one Republican representative from the Board of Elections.

The locations of each drop box are listed on the ballots themselves; they are all situated at municipal buildings with the exception of one at the Cherry Hill campus of Camden County College.

Voters may also return their ballots to the Camden County Board of Elections.

Ordinarily, about 60,000 Camden County voters submit their ballots by mail each election. This year, the county is expecting six times that amount, Schmidt said. To account for the extra volume, deadlines have been extended for their return.

Ballots postmarked on or before Election Day and received by November 10 will be counted, as will ballots with any postmark received within 48 hours of Election Day, Schmidt said.

Those deadlines are supremely important, he said, because “the number-one reason for a rejected ballot” is lateness. 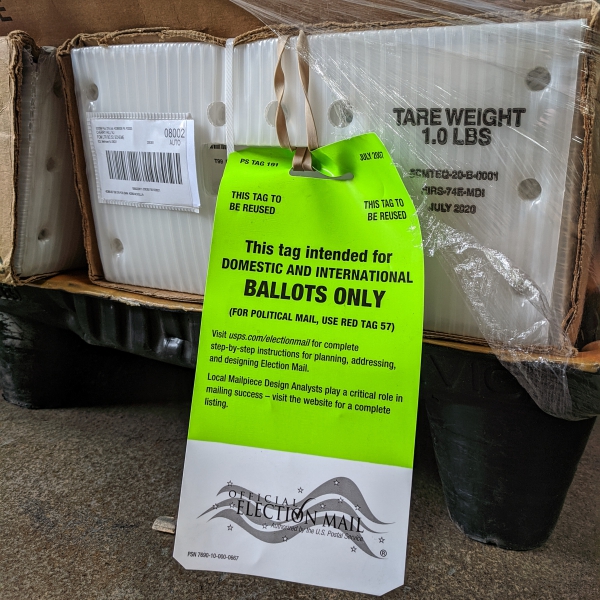 Who rejects ballots and why?

Aside from being late, another reason a ballot can be rejected is if it’s returned without a signature, or if it doesn’t match the signature of record for the voter in question.

New Jersey’s Ballot Cure Act of 2020 requires any voter whose ballot is rejected to be notified within 24 hours.

That voter may remedy any issues with the ballot until two days before the final election results are certified.

“It’s been a big issue, and I’m glad that it’s been addressed,” Schmidt said.

In Camden County, the commissioners of the Board of Elections—one Democrat and one Republican—look at every signature and compare it to those on the voter’s registration form or vote-by-mail application.

A common concern for signature mismatches is that the electronic voter registration process sources the voter’s signature from his or her driver license.

At the DMV, “people don’t always sign the electronic pad the same way they sign a piece of paper,” Schmidt said.

What happens if someone votes by mail and then shows up to cast a ballot at the polls?

Duplicate ballot submission is a typical occurrence, but not necessarily a malicious one, Schmidt said.

Election officials will disqualify the second ballot received, “and then it’s up to the board of elections whether to pursue fraudulent voting charges through the prosecutor,” he said. Any recommendation to press charges is based on a determination of intent.

“In every election, you will get a confused individual who gets the ballot in the third week of September, sends it in, and then forgets that, and goes and votes at the polls,” Schmidt said.

Although such mistakes happen, “it’s not recommended to test the system,” he said. 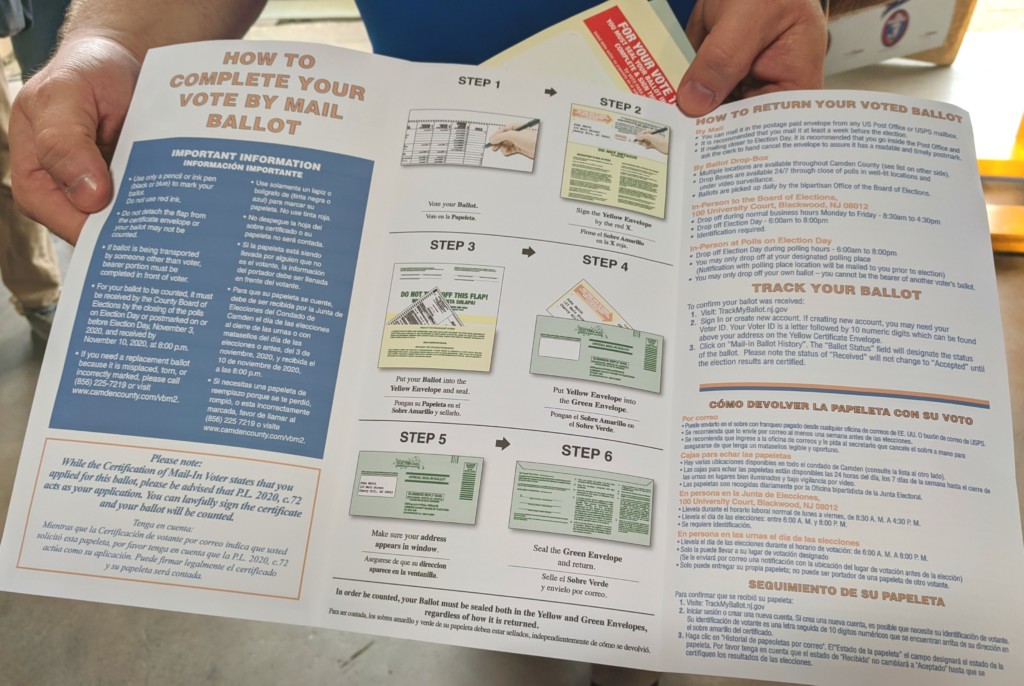 By his recollection, voter fraud charges have been filed rarely in Camden County.

The threat of punishment for committing fraud—a third-degree crime—is itself the biggest deterrent.

“Is somebody willing to commit fraud knowing that they might have to spend many years in jail, and/or pay a very hefty fine?” Schmidt said.

“Is the risk that person’s taking to have an extra ballot or two added to the list enough to warrant going to jail for many years?”

How do people who cast provisional ballots know if their votes have been added in the total?

One of the easiest ways to check for irregularities is to compare voting results against the records on file, Schmidt said. Election results are available on the county website as far back as 2000, and its paper records date back to 1984. The disposition of each ballot is recorded, along with whether it was cast in person or by mail.

Most concerns can be chalked up to human error, out-of-state records mismatches, or changes of address that weren’t registered within the system, Schmidt said.

“Everyone looks out for this,” Schmidt said.

Where can people vote in person?

Only 151 of 343 Camden County polling places will be open to in-person voting this Election Day.

Of those that will open, the Board of Elections sought to provide the most geographically convenient locations available.

Some have been closed for obvious reasons—those in senior citizen homes and fire departments, for example—and others have been consolidated into a single district.

Those in-person ballots will be considered provisional, however, and will be counted last, after all the mail-in ballots have been tallied.

Got a question we haven’t answered here? Send us a note.