Trending
You are at:Home»Business»Waiting to Wait on You: Novelty, Uncertainty for Independent Restaurants in COVID-19 Recovery

Chef-owned kitchens have become the economic backbone of small communities where brick-and-mortar business is drying up. How—and if—they rebound after the pandemic will say a lot about New Jersey’s broader recovery. 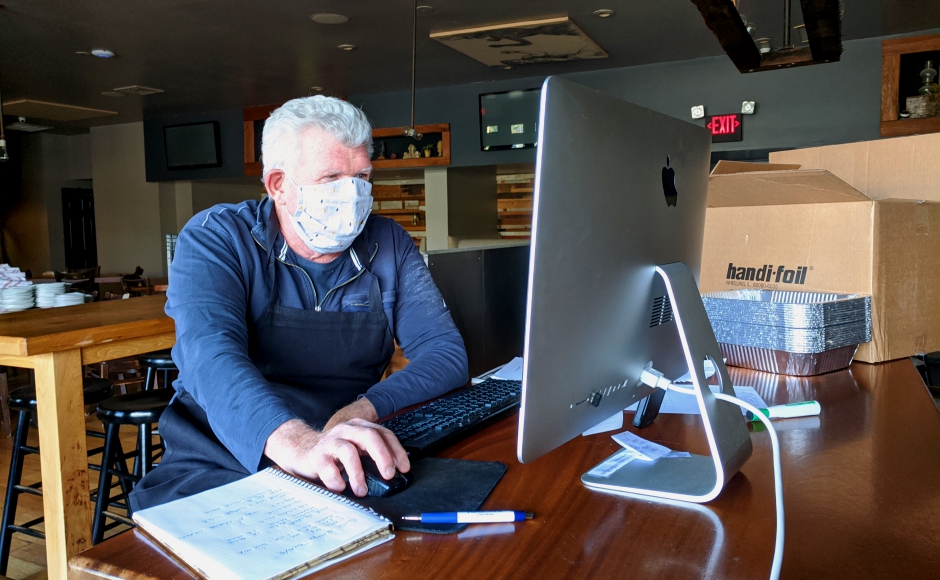 Inside Keg & Kitchen, his empty Haddon Township pub, owner Kevin Meeker sits at a high-top table with a desktop monitor, poring over pandemic news and setting up a plan for takeout orders.

“This is what a restaurant looks like these days,” Meeker said.

“All we’re doing is playing a waiting game and trying to figure out when we reopen.”

For restaurants like Meeker’s, which rely on dine-in business and bar customers, figuring out how to stay afloat during New Jersey’s stay-at-home order has been a complicated question.

Keg & Kitchen has offered curbside takeout for the past six weeks with a dramatically reduced staff, but it’s basically treading water compared with normal levels of business.

“That’s not a money-maker; that’s to keep the name of the restaurant out there so people don’t forget about you,” Meeker said. “The longer I wait, the harder it is to reopen.”

The persistent questions around reopening aren’t only when it will happen or what must be done to stay afloat in the meantime. They’re also about what these gathering spaces will look like at a presumptively reduced capacity; how customers’ behavior might change if and when they return; and what steps can be taken to contain the spread of novel coronavirus (COVID-19) to prevent them from being shuttered again.

“It’s really the great unknown,” Meeker said. “It’d be one thing if you have a store and you can keep people walking six feet behind one another, but here, they’re going to be coming in and sitting down.

“It’s going to be a real learning experience for all of us,” he said.

Meeker is keeping a weather eye on behavior in places like Hong Kong, where eateries have reopened with entire sections taped off, or with plastic partitions around close-quartered diners.

He’s taking input from his daughter, an ICU nurse at the University of Pennsylvania Hospital, and son-in-law, a doctor in training. Meeker said he’ll seek further guidance from other experts in the fields of disinfection, and knows he’ll be significantly re-training his staff about these issues before reopening.

“I want to be ready whenever we’re ready to go, but nobody knows when that is,” Meeker said. “I’m up in the air like everyone else.” 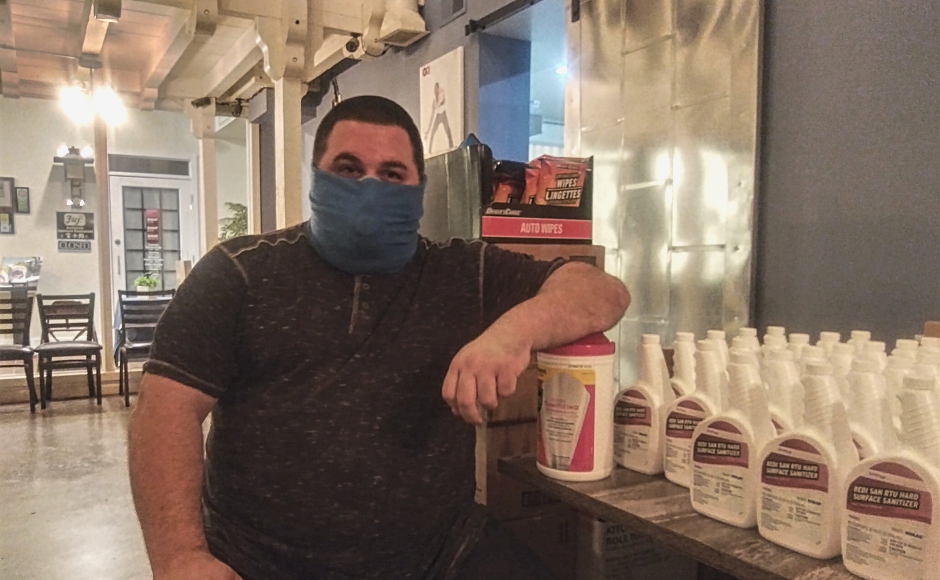 ‘Not every restaurant is going to open back up’

New Jersey’s reopening plans are still being developed in concert with those of six other states in the northeast to limit the potential for reinfecting a densely packed populace along highly traveled logistical routes.

For the past several years, that population density has contributed to the growth of an independent restaurant scene that’s helped rejuvenate local economies throughout South Jersey.

But after the pandemic subsides, there may be fewer dining options available to them.

“It’s no secret that not every restaurant is going to open up,” said Dave Murray, chef-owner of Denim BYOB in Haddonfield. “There are plenty of places that were already struggling before the pandemic happened.”

Murray’s seen estimates that anywhere from 20 to 35 percent of restaurants may not be able to reopen after the shutdown. Coupled with an anticipated cap on seating, he calculates that those who survive will face only 80 percent of their prior competition.

For customers, however, those figures might mean they’ll only have access to 40 percent of the seats that had been available to them just a few months ago.

“If you only have 40 percent of available seating, by default you should be able to get some business,” Murray said. “There are going to be people who’ve already had COVID-19 or they’re not afraid of getting it; tired of being indoors.

“The people who get their act together first, and the people who give their patrons a sense of trust and a sense of zen and calmness, they’re going to be the ones that really thrive,” he said.

Murray plans to tackle the question of consumer confidence by putting his sanitization practices on display. Wait staff could well be wearing masks at all times; all chairs and tables will be deep-cleaned with alcohol-based sanitizing wipes after every party.

“I want people who are waiting for their seat to see that and understand because that’s going to show that we’ve got our act together,” he said. “If you do everything right, you’ll earn that reputation right away for being a place that it’s safe to go eat.” 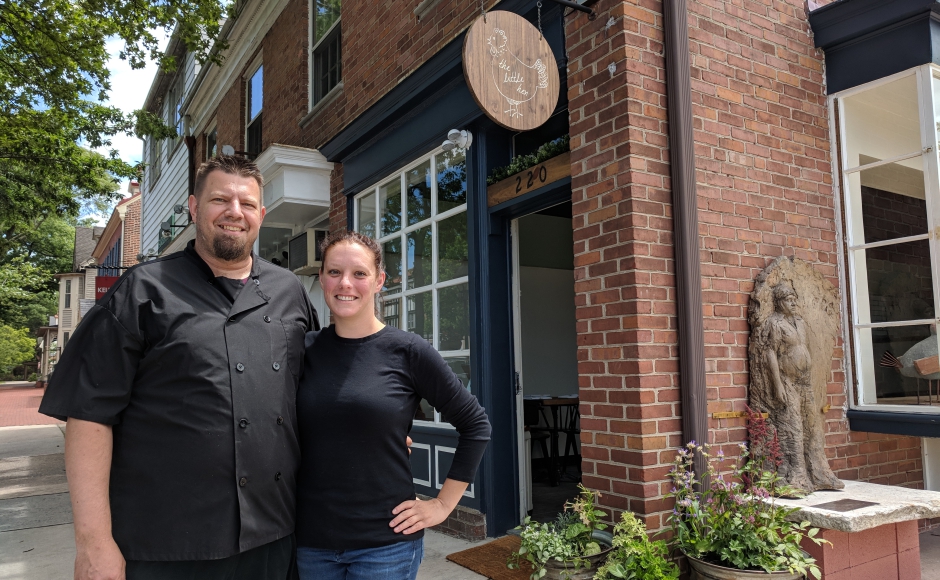 Mike Stollenwerk and Felice Leibowitz outside The Little Hen in Haddonfield in 2019. Credit: Matt Skoufalos.

The persistence of take-home kits

For smaller restaurants like Mike Stollenwerk’s Two Fish BYOB and its sister restaurant, The Little Hen, yielding half the dining room occupancy is much less of an option.

He’s more concerned about the fluctuation in prices of ingredients. Stollenwerk’s stock in trade is seafood, and fishermen aren’t going out right now.

“When they come back to the dock, either nobody’s buying it, or they’re buying it at a third of the cost,” he said. “They’re going to have money to recoup, so it’s going to trickle all the way down.”

To offset some of the impact of being sidelined from dine-in service, Stollenwerk has pivoted to offering curbside takeout meals, butcher boxes, and a virtual seafood market. Those have been so popular with customers that they might remain on offer even once the restaurant reopens for dine-in service.

“It’s going to be simpler to put together packages, and we have seafood coming in every day,” Stollenwerk said. “It’ll give you a chance to have three or four meals, and you can pick it up the same time you’re getting dinner.” 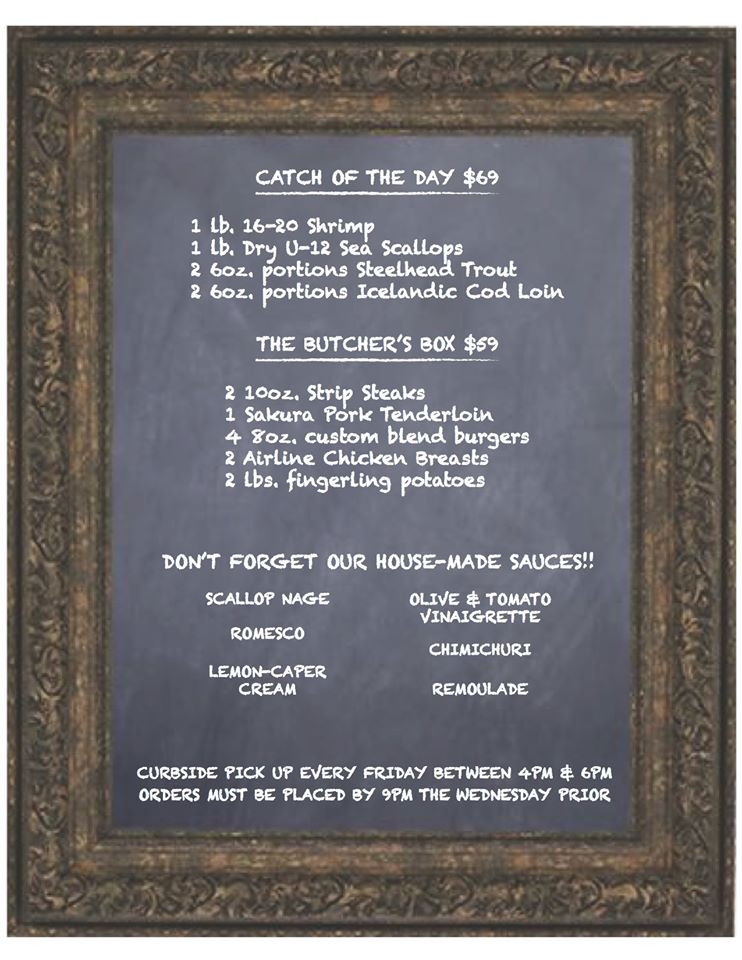 The idea of doing wholesale takeout while operating an intimate BYOB is a dramatic departure from how many chef-owners would have envisioned their business models even a few years ago.

“It’s going to be interesting to see the dining scene when this does wash out,” Stollenwerk said.

“[Then with]  saturation and different concepts, fine dining just went away.

“Everyone was going to culinary school and getting a quick degree and opening a simple concept restaurant,” Stollenwerk said.

“It will be interesting to see if fine dining makes a comeback out of this.”

When they do return to dining out—and Stollenwerk says his clients have been “amazingly supportive”—guests may find more of an appreciation for the work that goes into producing a restaurant-quality meal after having been on the hook for a few months of at-home cooking.

“The prep work and the long hours, before, it was taken for granted; now everyone’s at home doing it for themselves,” he said. “They get a little snapshot of what we do every day.” 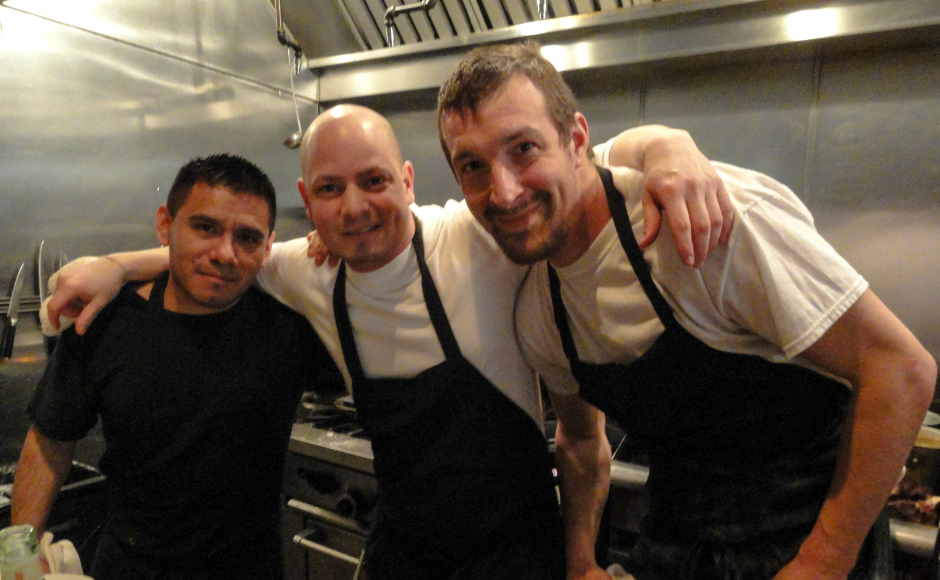 Chef Joey Baldino (center) has developed Zeppoli into a linchpin of the Collingswood dining scene despite being removed from the heart of its business district. Credit: Matt Skoufalos.

‘It makes you so grateful for what you do’

In Collingswood, eight-time James Beard nominee Joey Baldino is simply hunkering down and trying to get through the next several weeks.

Amid the chaos of the pandemic, the Albert Einstein quote, “Learn from yesterday, live for today, and hope for tomorrow,” has become a source of inspiration for a chef who’s admitted to a new feeling of uncertainty for the first time in his career.

“You think to yourself, ‘People will always need food, I’ll always have a job,’” Baldino said. “You feel secure in that, but it’s not true, because unforeseen circumstances can happen. It makes you so grateful for what you do. The fact that you can lose it in a second is a wake-up call.

“People put their heart, their soul, their lives, their livelihood, every single penny into the businesses,” he said. “If, through no fault of their own, they could be closed, that breaks my heart.”

Like Stollenwerk, Baldino thinks the pandemic will make patrons more aware of the work that happens inside a restaurant kitchen, “when they see that the bread is made in-house, or how the gelato is spun.” His customers have been broadly supportive of Zeppoli and Palizzi through the shutdown, and he is eager to get back to cooking for them.

Whenever the state restaurant industry can get back to work, it will be a key component of bringing the broader New Jersey economy back online, said Marilou Halvorsen, President and CEO of the New Jersey Restaurant and Hospitality Association (NJRHA). 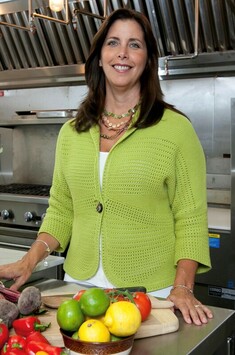 “The problem is the restaurant industry is the state’s largest private-sector employer,” Halvorsen said.

“When you had 80 percent of restaurant workers losing their jobs, that put a huge strain on unemployment.”

To date, the financial relief mechanisms offered to restaurant owners have been largely unhelpful, Halvorsen said.

The federal Paycheck Protection Program (PPP) “has been a complete disaster for the restaurant industry,” she said.

In addition to the bulk of PPP funds being gobbled up by large corporations, only 25 percent of the amount restaurants borrow to cover non-payroll costs, like rent and utilities, will be forgiven.

That’s another potential liability for restaurants to incur at a time when they’re already behind on bills and racking up new debt, and PPP loans must be repaid in two years.

Plus, with the allocation of $600 per week in federal Pandemic Unemployment Assistance funds, some out-of-work restaurant staff stand to make more money from unemployment than they would collecting a PPP-backed paycheck.

The biggest thing Halvorsen encourages both restaurant owners and their patrons to remember is that “this is not going to go on forever.”

“You’re talking a month or two months before you go back to normal,” she said.

NJRHA has submitted its own recommendations for reopening the restaurant industry to Governor Phil Murphy’s Restart and Recovery team. Halvorsen said it leans on the “very, very strict guidelines on sanitation” already present in the food industry, and offers guidance on best practices, including disposable menus and condiments, masks for customer-facing employees, and options for reducing total capacity.

She hopes that patrons will be kind while the kinks are worked out.

“It is going to be nerve-wracking for employees to go back in there and deal with customers,” Halvorsen said. “Restaurants are not going to get it right 100 percent, and there could be some issues.

“I hope people are respectful,” she said. “I think there’s a lot of goodwill. Will that last forever? Who knows?”